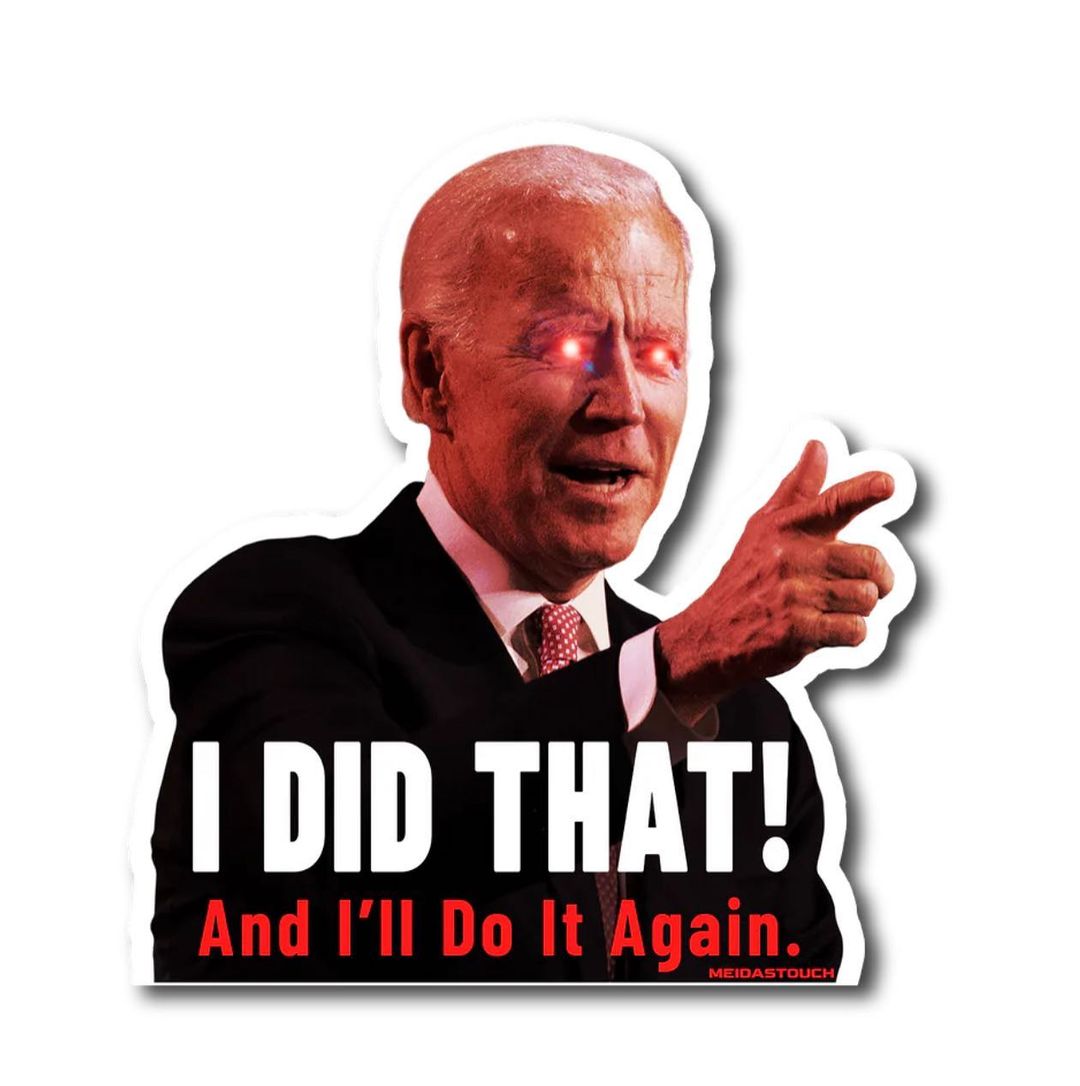 “Top Republicans’ biggest private fear — that November’s midterms will turn on public opinion about former President Trump, not inflation and crime — is unfolding across the political landscape,” Axios reports.

“Trump is dominating the news, picking Trump-like candidates in primaries — and shaping the views and rhetoric of elected officials, and those hoping to become one.”

“That’s why Senate Minority Leader Mitch McConnell is telling people his party is blowing a golden opportunity to win the Senate. It’s also why Republicans no longer feel so confident of a landslide in the House.”

Karl Rove: “This is shifting the midterms from being a referendum on Mr. Biden’s failures to a comparison between Mr. Biden and Mr. Trump, which diminishes the Republican advantage.”

“We’re also moving our November rating for Alaska’s At Large CD from Likely Republican to Toss Up on the heels of Democrat Mary Peltola’s ranked-choice upset of Republican Sarah Palin in the August 16 special election.”

The Colorado poll was released shortly after the Democratic firm Public Policy Polling publicized its own numbers showing Bennet ahead by a very different 46-35 margin. PPP also found Libertarian Brian Peotter grabbing 7%, while the Tarrance Group does not appear to have presented him as an option.

PENNYSLVANIA U.S. SENATOR. “Pennsylvania Democrat John Fetterman’s Senate campaign said Wednesday that his stroke recovery, which has complicated his ability to engage in verbal conversations, could influence his plans for debates with Republican nominee Mehmet Oz in one of this fall’s highest-stakes races,” the Washington Post reports.

“Advisers say Fetterman can engage in one-on-one conversations but struggles with more chaotic auditory environments, a condition that is common for stroke survivors and which doctors say can improve over time.”

Said campaign strategist Rebecca Katz: “We are working to figure out what a fair debate would look like with the lingering impacts of the auditory processing in mind.”

NEW HAMPSHIRE U.S. SENATOR. “National Republicans appear to be dropping millions of dollars in New Hampshire’s Senate primary, a sign that the party is intervening in a race to prevent a far-right candidate from becoming the nominee,” Politico reports.

Deep-pocketed Republicans are taking action two weeks ahead of 2022’s final Senate primary to ensure that the party nominates state Senate President Chuck Morse rather than retired Army Brig. General Donald Bolduc, a far-right conspiracy theorist who has posted wide leads in two recent polls even though he’s raised very little money. Politico reports that White Mountain PAC, an organization that was only set up on Tuesday, has reserved as much as $4.1 million on an ad campaign to promote Morse in the Sept. 13 primary to take on Democratic Sen. Maggie Hassan.

The opening spot praises Morse as a border hawk, something the candidate himself has also been doing in his own commercials, without mentioning Bolduc or Hassan. White Mountain PAC is so far the only major outside group to get involved here, though there’s still time for that to change. The GOP firm Medium Buying relays that the Democratic organization Senate Majority PAC has also booked ads for Sept. 2 through Sept. 13, but there’s no other information yet about the topic of those commercials.

White Mountain PAC’s move comes a week after Senate Minority Leader Mitch McConnell bemoaned that “candidate quality” could keep the GOP from seizing the majority, and there’s plenty of speculation that his allies are behind the effort to stop Bolduc. The retired general’s spokesperson very much sees it that way, as he characterized the ad campaign as a “last ditch and losing effort by the establishment to prop up one of their own.”

Senate Leadership Fund, which bankrolled another super PAC earlier this summer as part of a successful effort to block Eric Greitens in the Missouri Senate primary, did not respond when Politico asked for a comment. However, the story notes that White Mountain PAC’s treasurer is a former NRSC finance director.

Georgia Honor, which is an affiliate of the Democratic group Senate Majority PAC, opens its new ad against the Republican Senate nominee by informing viewers, “Herschel Walker has repeatedly threatened to kill his ex-wife.” The narrator continues, “He held a razor to her throat and threatened to kill her. He’s accused of choking her until she passed out. He threatened a shoot out with police outside her home.”

The spot goes on to feature an old clip of Walker, who says he suffered from dissociative identity disorder, recounting, “And, um, I put a gun to her head.” It also plays 2008 footage of his former spouse, Cindy Grossman, telling an interviewer, “The first time he held the gun to my head … He held the gun to my temple and said he was going to blow my brains out.”

The story surfaced a year ago when the Associated Press reported that Grossman secured a restraining order against Walker for allegedly threatening to kill her and her boyfriend. This account, as well as many other critical stories about his past, convinced some Republicans that Walker would be a disastrous general election nominee against Democratic incumbent Raphael Warnock, but his critics were deep in the minority: A planned multi-million primary ad campaign to derail Walker never materialized, and the former football star went on to take the nomination in May with 68% of the vote.

A few weeks ago, a group called the Republican Accountability Project launched the first TV commercial about the domestic allegation violence against Walker. The Republican responded to that buy, which had only $100,000 behind it, by emailing supporters, “In 2008, my former wife, Cindy, and I gave a TV interview to share our story — not about the glory days of football but about the pain of my mental health struggles and their effect on our marriage.” He continued, “The ad makers took something designed to do good and turned it into something evil, which will harm innocent people.”

OHIO U.S. SENATOR. “Ohio voters will begin casting their ballots in six weeks — and J.D. Vance has been difficult to find,” CNN reports.

“The rookie GOP candidate goes days without any public events, and his campaign gives little information about his whereabouts.”

“He has been slow to build a fundraising operation, and a ground game, and is being dramatically outspent on air while racking up a nearly $900,000 in campaign debt last quarter. And now, a super PAC with ties to Senate Minority Leader Mitch McConnell is planning to spend a staggering $28 million on television ads here to save a Senate seat once viewed as a lock— and deny Democratic Rep. Tim Ryan a chance for a major, midterm upset.”

David Frum: “Republicans are no innocents when it comes to preelection vote buying. In advance of the 2020 election, President Trump almost tripled payouts to farm families to offset the pain of his trade war with China, from $11.5 billion in 2017 to $32 billion in 2020. But Biden’s college-debt-relief program is far larger than Trump’s handout to farmers, adding up to at least $330 billion over 10 years, and possibly as much as $1 trillion.”

WISCONSIN GOVERNOR. Wisconsin gubernatorial candidate Tim Michels (R), who was endorsed by Donald Trump, is calling for people to take up “pitchforks and torches” in reaction to a story that detailed his giving to anti-abortion groups, the AP reports.

“The high-profile rendezvous, at the palatial seaside retreat of old Trump real estate friends, has already prompted days of Democratic attacks against Mr. Zeldin, the Republican nominee for governor.”

ARIZONA GOVERNOR. Kari Lake was one of many Republicans who called for the FBI to be abolished after it searched Mar-a-Lago, and Democrat Katie Hobbs is now running an ad arguing this shows how dangerous her opponent is. The commercial first uses clips of Lake saying, “I don’t think abortion should be legal” and “[p]ut cameras in the classroom,” before the spot features footage of her appearance on far-right host Steven Crowder’s show. “You really think it’s important to disband the FBI?” Crowder asks, to which Lake replies, “100%.”

A separate Hobbs spot focuses on Lake’s support for a pre-statehood law that the narrator says could sentence “any person in Arizona who helps a pregnant woman get an abortion” to “two to five years in prison.” The Democrat is also pushing back on GOP ads that portray her as weak on border security with another piece of her own starring two border county sheriffs. “Katie Hobbs will deliver whatever resources are needed to keep you safe,” says Pima County’s Chris Nanos, while Santa Cruz County’s David Hathaway argues, “I’m tired of the talk. Katie Hobbs is about action.”

MAINE GOVERNOR. The Maine Republican Party is up with an ad that tries to portray Paul LePage in an unusually sympathetic light, while a Democratic group called Better Maine is using its own spot to remind viewers of LePage’s many offenses as governor. Neither commercial mentions Democratic incumbent Janet Mills, whom LePage is hoping to unseat.

The state GOP, which earlier this year received about $4 million in funding from the RGA, focuses on LePage’s difficult upbringing. “He left home at age 11,” says the narrator, “to escape the repeated beatings of his alcoholic father. He lived on the streets of Lewiston and worked odd jobs just to survive.” The commercial continues by describing LePage as “a governor for all Mainers,” arguing he “understands the struggles we face, and he knows how to turn things around.”

Better Maine, which is financed by the DGA and EMILY’s List, has a very different take on LePage’s tenure. After playing a quick clip of him saying, “I’m gonna deck ya!” the narrator faults him for “trying to cut funding for our public schools, and he opposed a pay raise for Maine teachers.” The spot goes on, “LePage defunded a family planning program, slashing funding for cancer screenings and women’s healthcare … LePage even opposed funding for Meals on Wheels.”

OREGON GOVERNOR. Democrat Tina Kotek’s new commercial on gun safety for the three-way race for governor only attacks independent Betsy Johnson while ignoring Republican Christine Drazan, which represents a bit of a different strategy from what we’ve seen from the other two candidates so far. The narrator, a mother identified as Angela, tells the audience, “To hear that Betsy Johnson opposed red flag laws to keep guns out of the hands of people like the Uvalde shooter and opposed background checks and safe storage laws? I’m a hard no.”

Drazan and Johnson, by contrast, each launched ads in August going after both of their rivals. Drazan’s commercial argued that Kotek and Johnson, who was a conservative Democrat until last year, both supported termed-out Democratic Gov. Kate Brown’s agenda, while the Republican would represent change. Johnson’s piece, by contrast, depicted Kotek and Drazan as occupying opposite ends of the political extreme, saying that the Democrat is weak on public safety while Drazan “wants to make abortion illegal.”

OHIO GOVERNOR. Democrat Nan Whaley’s new ad against Republican Gov. Mike DeWine focuses on the infamous story of a 10-year-old rape survivor who had to travel to Indiana for an abortion. “In Mike DeWine’s Ohio, 10-year-old rape victims forced to flee the state,” says Whaley’s narrator, who continues, “Women and doctors arrested for routine healthcare. The freedom to make our own personal medical decisions banned.”