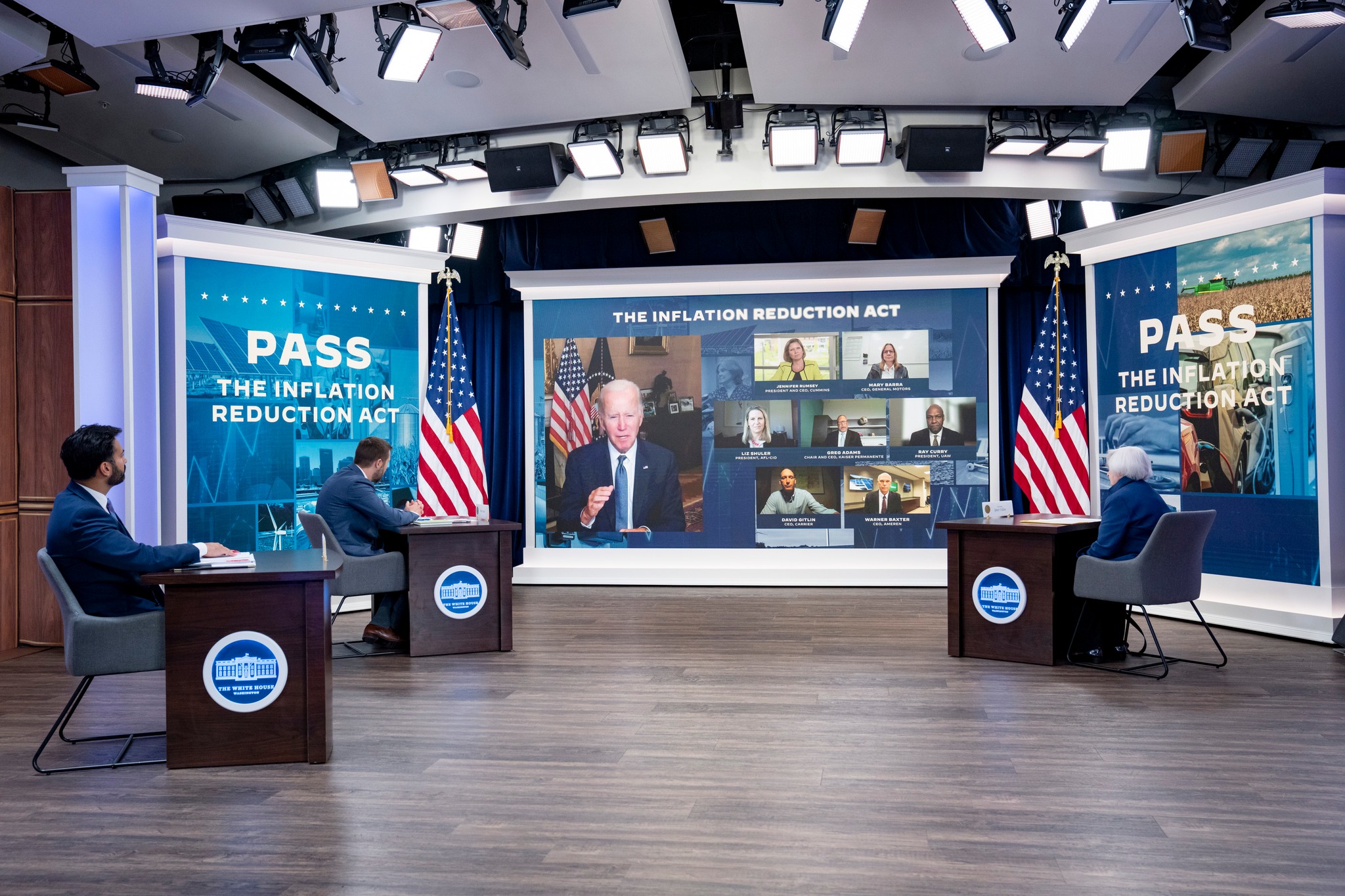 “House Republicans are starting to grow pessimistic about their chances of winning a massive majority in the midterm elections, putting some allies of GOP Leader Kevin McCarthy on edge over his future,” CNN reports.

“While GOP lawmakers are still confident they will be able to recapture the House this fall — thanks to a map and historical trends that are both in their favor — there are new concerns inside the party that Democrats might be able to minimize the GOP’s gains in November, according to interviews with nearly a dozen Republican lawmakers and aides.”

“And the size of the GOP’s majority matters — both for McCarthy’s ability to secure the speaker’s gavel and his ability to govern a Republican conference that has swung increasingly to the right while a crop of the party’s moderates and dealmakers have headed for the exits.”

“Senior House Republicans are putting together a list of policy pledges to run on in the 2022 elections, and they are consulting with the architect of one of their biggest historical midterm victories,” the Washington Post reports.

“Newt Gingrich, whose ‘Contract with America’ in 1994 is linked with the GOP takeover of Congress in that midterm cycle, said he has been advising House Minority Leader Kevin McCarthy on a set of policy items for Republicans to take to voters ahead of the November elections. House Minority Whip Steve Scalise and other members of House Republican leadership are also involved in the project, which is not expected to launch until the spring or summer.”

David Drucker: “Fresh doubts about the Republican Party’s chances of winning Senate control in midterm elections are being fueled by a slate of first-time candidates struggling to find their footing against seasoned Democratic competition.”

“Initial projections suggested a red tidal wave might sweep Republicans to power in November, ousting Democrats from Georgia to Washington state and New Hampshire to Arizona. With Labor Day and the homestretch of the fall campaign approaching, the GOP is suddenly fighting to defend seats in red states like Ohio and swing states like Pennsylvania. The culprit? Candidates endorsed by former President Donald Trump who were ill-prepared for the general election.”

The DCCC announced a second round of fall TV ad reservations on Friday, totaling $24 million across 22 different media markets. The most notable new market the committee is investing in is Eugene, Oregon, which overlaps heavily with the state’s redrawn 4th District. There, Democrat Val Hoyle is facing off against Republican Alek Skarlatos for an open seat that Democrats made several points bluer in redistricting: While the prior version went for Joe Biden by a 51-47 spread, the new iteration would have supported the president by a larger 55-42 margin.

This latest set of bookings brings the D-Trip’s total reserved airtime to just shy of $46 million. You can explore a full rundown of all of the committee’s new reservations, as well as those from the House Majority PAC, NRCC, and Congressional Leadership Fund, with our continually updated tracker.

The conservative Congressional Leadership Fund has booked $28.5 million more in fall TV time and another $8.5 million for digital ads, and we’ve collected the information here. On the Democratic side, House Majority PAC also announced that it was reserving another $1.2 million across four markets.

In a break with past practice, CLF announced most of its new reservations by district rather than media market. We’ve therefore sought to assign districts to media markets for inclusion on our main tab that lists total for all four groups, but for districts that stretch across more than one market, we’ve simply labeled them as “[Multiple].” Note that even though the PAC says it’s booking time for specific districts, the actual reservations are still made at the media market level, meaning the sums here could still be shifted to other seats.

CLF is the first super PAC to explicitly say it will spend money in two Democratic-held seats, Indiana’s 1st District and New York’s 17th. HMP, though, booked nearly $4 million earlier this year for the Chicago media market, and some of that money could be used to protect Rep. Frank Mrvan in the Hoosier State. CLF also previously reserved $4.4 million for the massive New York City market, which includes Rep. Sean Patrick Maloney’s new constituency.

CLF also is the first major outside group to book any money in Iowa’s 2nd, where Republican Rep. Ashley Hinson is defending a seat that Trump would have carried 51-47.

MASSACHUSETTS SECRETARY OF STATE. Ahead of the Sept. 6 Democratic primary, MassINC has conducted a poll for the liberal group Priorities for Progress that finds longtime Secretary of State Bill Galvin up 53-20 over Boston NAACP President Tanisha Sullivan (Galvin previously led 52-15 in June). Those results are similar to a poll released days before from GOP firm Advantage, Inc. that gave Galvin a slightly larger 55-14 lead. Meanwhile on Friday, EMILY’s List endorsed Sullivan.

LOS ANGELES MAYOR. UC Berkeley has conducted a poll co-sponsored by the Los Angeles Times that finds Democratic Rep. Karen Bass up 43-31 over billionaire developer Rick Caruso in November’s mayoral general election, with 24% undecided. That advantage is slightly larger than Bass’ 43-36 plurality in the June top-two primary, where two other progressive candidates had also combined for nearly 15%.

NEW YORK 10TH CD. Haaretz reports that the hawkish pro-Israel group AIPAC acknowledged shortly after New York’s primary that it had given “significant support” to a mystery group that had dropped $395,000 just before the Democratic primary in New York’s open 10th Congressional District.

That organization, called New York Progressive PAC, ran digital ads and sent out mailers attacking Assemblywoman Yuh-Line Niou’s opposition to a low-income housing development and claiming she “supports the anti-Semitic BDS agenda.” In July, Niou had said she supports BDS, a movement that seeks to pressure the state of Israel through boycotts, divestment, and sanctions, but she more recently sought to distance herself from the effort, saying, “I do not agree with all of its demands nor do I embrace all of its tactics.” Niou lost the primary to attorney Daniel Goldman by a 26-24 margin.

AIPAC, which also supports numerous Republicans who voted against certifying Joe Biden’s victory, has been one of the top outside spenders in Democratic primaries nationally this cycle. However, its previous interventions have all come through its United Democracy Project, making it notable that the organization sought to conceal its involvement in this race until after all votes were cast.

MICHIGAN 8TH CD. Democratic Rep. Dan Kildee and Republican challenger Paul Junge have released a back-and-forth series of ads touching on Junge’s ties to Michigan and his long absence from the state.

The most recent spot comes from Kildee, who notes that Junge spent 40 years living outside the state, 30 of those in California. Kildee charges Junge only moved back to Michigan ahead of a bid for a House seat in the Detroit area in 2020, when he lost to Democratic Rep. Elissa Slotkin. Now Junge is running in a different district in a totally different part of the state—the Flint and Tri-Cities area, where he’s never lived.

Kildee’s spot is a retort to a Junge ad that itself was responding to similar initial attacks from Kildee about Junge’s ties to central Michigan. In that ad, Junge argued that Kildee is trying to distract from inflation, saying he was born in Michigan and claiming his family “moved around a lot” because his parents worked on military bases. He says he moved to Washington to work for the Department of Homeland Security and then to California to be near his dying father.

NEW HAMPSHIRE 1ST CD. The Congressional Leadership Fund has spent $290,000 so far in a campaign to boost 2020 nominee Matt Mowers ahead of the Sept. 13 Republican primary. Mowers has the support of House Minority Leader Kevin McCarthy and Minority Whip Steve Scalise as he seeks a rematch against Democratic Gov. Chris Pappas; the third-ranking Republican in the leadership, New York Rep. Elise Stefanik, has broken off and backed one of her former aides, Karoline Leavitt.

MICHIGAN ATTORNEY GENERAL and SECRETARY OF STATE. Michigan Republicans held their party convention on Saturday and officially nominated Matt DePerno for attorney general and Kristina Karamo for secretary of state. Both far-right candidates essentially clinched the nod at the party’s endorsement convention back in April, which left them with several months to fundraise before this weekend’s gathering. However, they didn’t use that time especially well: Democratic Attorney General Dana Nessel held a $2.5 million to $130,000 cash-on-hand lead early this month, while Democratic Secretary of State Jocelyn Benson enjoyed a $3.2 million to $280,000 advantage.

Under party rules, it would have taken an affirmative vote from three-fourths of Saturday’s delegates to overturn the results of the endorsement convention and select different nominees. No one seriously seems to have considered trying this, though, even though DePerno is under state investigation for allegedly being part of a scheme to illegally acquire and tamper with voting machines early last year.

State Rep. Ryan Berman, who lost to DePerno back in April, still used the convention to reiterate his old fears about his former opponent’s prospects. “Like I said, there’s a chance maybe he gets disbarred,” Berman said, adding, “Maybe there’s a criminal indictment, and that wasn’t theoretical.”

Associated Press: “Would-be supporters in key states have openly expressed skepticism about a Cheney presidential run, even one solely designed to block Donald Trump’s return to the White House.”

“In fact, Republican voters and local officials in three of the states that matter most in presidential politics — Iowa, New Hampshire and South Carolina — believe the soon-to-be-unemployed congresswoman has little path to relevancy in a 2024 presidential primary, never mind a path to victory. Some sympathizers fear she would actually help Trump if she runs.”

“Such is the colossal political challenge ahead for Cheney, a Republican seeking to transform a 37-percentage-point home-state loss into a national campaign to destroy Trump’s White House ambitions. There is no precedent for what she hopes to accomplish.”

“It’s a banner year for insurgent House candidates: 2022 is posting the second-highest number of primary losses for House members since 1948,” Axios reports. The reason? Redistricting and “rising populism is weakening the shield of incumbency.”

A new USA Today/Ipsos poll finds 59% of Republican voters said Donald Trump should be the Republican nominee in 2024 and that he “deserves re-election,” while 41% said it’s time for a change within the GOP and that Trump shouldn’t run.

Gallup: “Seventy-one percent of Americans now approve of labor unions. Although statistically similar to last year’s 68%, it is up from 64% before the pandemic and is the highest Gallup has recorded on this measure since 1965.”