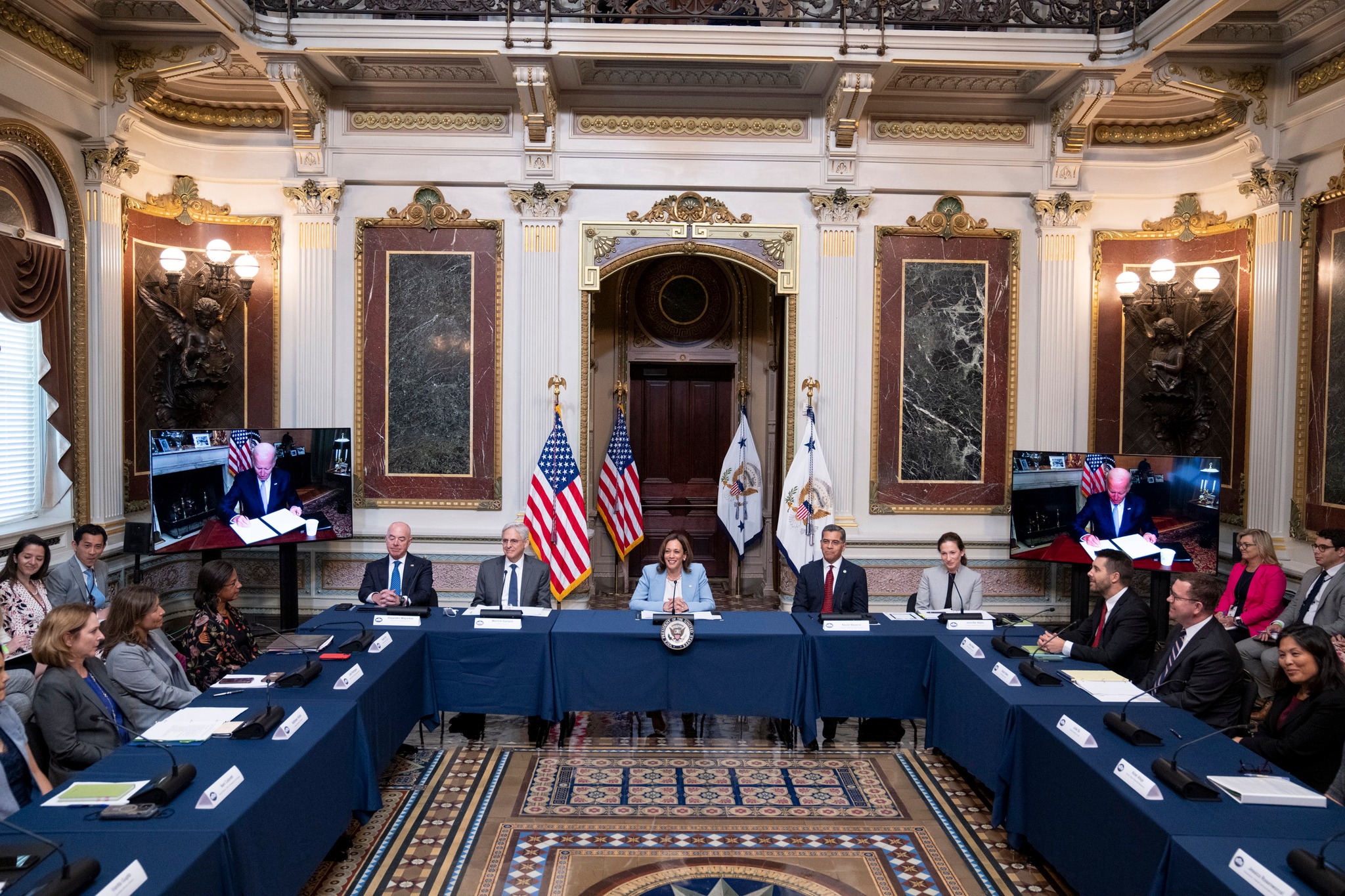 Its battleground tracker also predicts Republicans will flip the House, though with an increasingly small majority.

Playbook: “The burst of reporting reconsidering the conventional wisdom that Democrats will be crushed in the 2022 midterms continues this week. Most of the pieces emphasize that the return of Trump — through the Jan. 6 committee, the fringe candidates he’s backing and the multiple investigations he faces — could help Democrats bury their differences with anti-Trump Republicans and independents and unite into a majority coalition similar to the one that fueled Dem victories in the Trump-centered elections of 2018 and 2020.”

“Trump helps Biden because the former is even more unpopular than the latter.

Amy Walter: “While neither Biden nor Trump are popular, Trump is the more polarizing. New polling from NBC News finds Trump’s net favorable ratings (-18) to be twice as bad as Biden’s (-8).”

“Republicans remain the favorites to win control of the House of Representatives in the midterm elections, but Democrats, who for over a year have braced for large losses, are finishing the summer in a stronger position than where they started,” the Wall Street Journal reports.

“Public polling and recent election results are prompting Democrats, nonpartisan election observers and some Republicans to expect a more competitive battle this fall. Republicans need just a handful of seat pickups to take over the House, which Democrats currently control 220-211 with four vacancies.”

“The most endangered Senate Republican incumbent — who’s trailing his reelection foe in one of the most closely divided states in the country — could face a tough vote just weeks out from Election Day on whether to enshrine same-sex marriage into law,” Politico reports.

“As Senate Majority Leader Chuck Schumer moves closer to a vote that would put Sen. Ron Johnson on defense in the home stretch of the midterms, the Wisconsin conservative is suddenly under the microscope on a social issue that he’s rarely focused on during his decade-plus in office. But it’s far from clear whether he’ll take that baby step to the center ahead of a November contest against Democratic Lt. Gov. Mandela Barnes, who’s opened a slight lead in public polls.”

PENNSYLVANIA GOVERNOR. Washington Post: “Since winning the primary in May with 44% of the vote — after snagging a last-minute endorsement from former president Donald Trump and surviving a late scramble to consolidate the vote against him — Mastriano has eschewed the typical path of reorienting his campaign toward the middle. Instead, he has held fast to the same issues that drove his rise after attending the Stop the Steal rally in Washington on Jan. 6, 2021, and openly embracing Christian nationalism.”

“But many Republicans say Mastriano’s focus on base voters has made it hard for him to raise money and broaden his appeal, hurting the party’s chances in November. Mastriano’s latest campaign finance report showed less than $400,000 as of June, and the campaign hasn’t bought any airtime on local TV. He only grants interviews to friendly outlets such as right-wing talk radio and the podcast hosted by former Trump adviser Stephen K. Bannon. The campaign did not respond to requests for comment for this article.”

FLORIDA GOVERNOR. Florida Gov. Ron DeSantis (R) had to pull out of a fundraiser for New York gubernatorial candidate Lee Zeldin (R) because of an “unforeseen tragedy,” the New York Post reports.

Said a spokeswoman: “An unforeseen tragedy forced Governor DeSantis to reschedule his trip to New York. While we’re rescheduling with Governor DeSantis for a later date, tonight’s fundraiser will proceed and is expected to raise almost a million dollars.”

The DGA has released a poll from Impact Research taken the day before the Aug. 23 Democratic primary that found newly minted nominee Charlie Crist trailing GOP Gov. Ron DeSantis by a modest 51-46 spread. There have been very few polls of this race released this summer.

However, this latest result is a few points better for Crist than a recent survey from the GOP firm Cherry Communications for DeSantis’ allies that showed him ahead 51-43 and a poll from the University of North Florida that gave the governor a similar 50-42 lead, both of which were conducted earlier in August.

“McConnell has never offered more detail about which party nominees he’s worried about, but he hosted a fundraiser Friday night in Louisville to boost the former UGA footballer’s campaign nonetheless.”

Monkey Cage: “The media has routinely reported on these falsehoods, making it seem like misinformation is rampant in politics. But are candidates for Congress actually sharing more misinformation in 2022 than 2020?”

“Yes, according to our analysis of congressional candidates’ Facebook posts. We found that politicians in the 2022 election are sharing more links to unreliable news sources than they did in 2020, and the increase appears to be driven by nonincumbent Republican candidates.”

TEXAS GOVERNOR. “Beto O’Rourke (D) announced Sunday that he has been diagnosed with a ‘bacterial infection’ and after receiving care at the hospital, he will be “resting at home,” postponing events in his campaign against Gov. Greg Abbott (R),” CNN reports.

MICHIGAN GOVERNOR, ABORTION REFERENDUM, ATTORNEY GENERAL and SECRETARY OF STATE.  A new Michigan poll from EPIC-MRA has good news for Democrats and progressives on all fronts. Most notably, it shows voters giving overwhelming support to a measure to amend the state constitution to enshrine the right to an abortion, with 67% in favor and just 24% opposed. This appears to be the first poll on the amendment, which the state’s Bureau of Elections just recommended appear on the November ballot. A separate body called the Board of State Canvassers will issue a final decision on Aug. 31.

KANSAS GOVERNOR. State Sen. Dennis Pyle, a former Republican who left his party earlier this year to become an independent, has qualified for the November ballot, elections officials announced on Thursday. Pyle was aided in his quest by Kansas Democrats, who hope that he’ll pull votes away from Republican nominee Derek Schmidt and improve Democratic Gov. Laura Kelly’s chances at re-election. (Pyle has denounced Schmidt as insufficiently conservative and called the major-party candidates “two peas in a pod.”)

The only recent poll of the race, a survey for allies of Schmidt, found Pyle taking just 2%, with Schmidt edging out Kelly 48-45, but there’s no telling yet whether Democrats plan to spend money to boost Pyle’s name recognition.

NORTH CAROLINA U.S. SENATOR. A Senate Majority PAC affiliate has launched a new ad attacking Republican Ted Budd for supporting a national ban on abortion without exception for rape or incest that would criminalize those who provide it. The spot is part of a $750,000 buy that follows approximately $2 million in earlier spending. While SMP and their counterparts at the DSCC previously did not include North Carolina in their fall ad reservations earlier this spring, those are subject to change given changing conditions, and it’s notable that SMP is still trying to put this race on the board now that it’s nearly September.

“Democratic candidates have decried North Carolina’s newly reinstated abortion restrictions after a federal judge allowed a state law banning nearly all abortions after 20 weeks of pregnancy to go into effect,” the AP reports.

“But some North Carolina Democrats say the ruling earlier this month — the latest fallout of the June U.S. Supreme Court decision eliminating federal abortion protections — might be the catalyst their party needed to reinvigorate its political prospects in what was shaping up to be a losing year.”

What makes SLF’s decision all the more remarkable is that the organization, which has close ties to Mitch McConnell, is seemingly flush: As of June 30, the PAC had $105 million in the bank and has undoubtedly raised more in the two months since. That stands in sharp contrast with the NRSC, which had just $23 million on hand at the end of July (though super PACs, unlike party committees, can accept donations of unlimited size).

So why pull back? SLF’s own president, Steven Law, claimed that “other offensive opportunities … have become increasingly competitive,” though at this point, Georgia and Nevada are the only states he could plausibly have in mind (and note that the NRSC also recently canceled $1.5 million in TV time in the latter). But more telling—if he’s being truthful—is Law’s admission that his group faces “an unexpected expense in Ohio, “a reference to the fact that SLF recently announced it was pouring $28 million into the Buckeye State to bail out the GOP’s hapless candidate there, J.D. Vance.

The New York Times’ Shane Goldmacher also offered another theory: SLF is trying to send a message to Masters’ chief benefactor, billionaire venture capitalist Peter Thiel. Thiel’s own super PAC spent $15 million to help Masters—an employee and protégé—win the Republican primary earlier this month, much as he did for Vance in May. But like some sort of malign deist entity, it seems that Thiel birthed Masters and Vance only to abandon the universe we know as the general election.

So now, according to this argument, the SLF is desperately hoping to signal Thiel and all but force him to intervene. If true, though, the fact that the best-funded Republican super PAC has to resort to drastic advertising cuts to get the attention of one of the GOP’s wealthiest megadonors is not a sign of harmonious party. And even if Thiel does belatedly return to the playing field, he’ll have to pay higher advertising rates, since rates go up the closer you get to Election Day.

Republicans still insist Arizona is play, and simply given its swing-state status, it probably is. But if they do ultimately give up on Masters, the path back to a majority for the GOP, which is facing an increasingly likely loss in Pennsylvania, will grow exceptionally narrow.

“House Republican Leader Kevin McCarthy’s leadership PAC has reserved another $37 million in TV time for the last two months before midterms — with $9 of every $10 targeting seats carried by President Biden in 2020,” Axios reports. “The aggressive buy from the Congressional Leadership Fund is a rejoinder to growing talk about Democrats finding a shot to retain the House.”

“I think Republicans are in real trouble because we have no leadership.” — Rep. Adam Kinzinger (R-IL), on Meet the Press.

“Many of the election deniers running for secretary of state this year have spent their time talking about something they can’t do: ‘decertifying’ the 2020 results,” Politico reports.

“The bigger question — amid concerns about whether they would fairly administer the 2024 presidential election — is exactly what powers they would have if they win in November.”

“Atop the list of the most disruptive things they could do is refusing to certify accurate election results — a nearly unprecedented step that would set off litigation in state and federal court. That has already played out on a smaller scale this year, when a small county in New Mexico refused to certify election results over unfounded fears about election machines, until a state court ordered them to certify.”