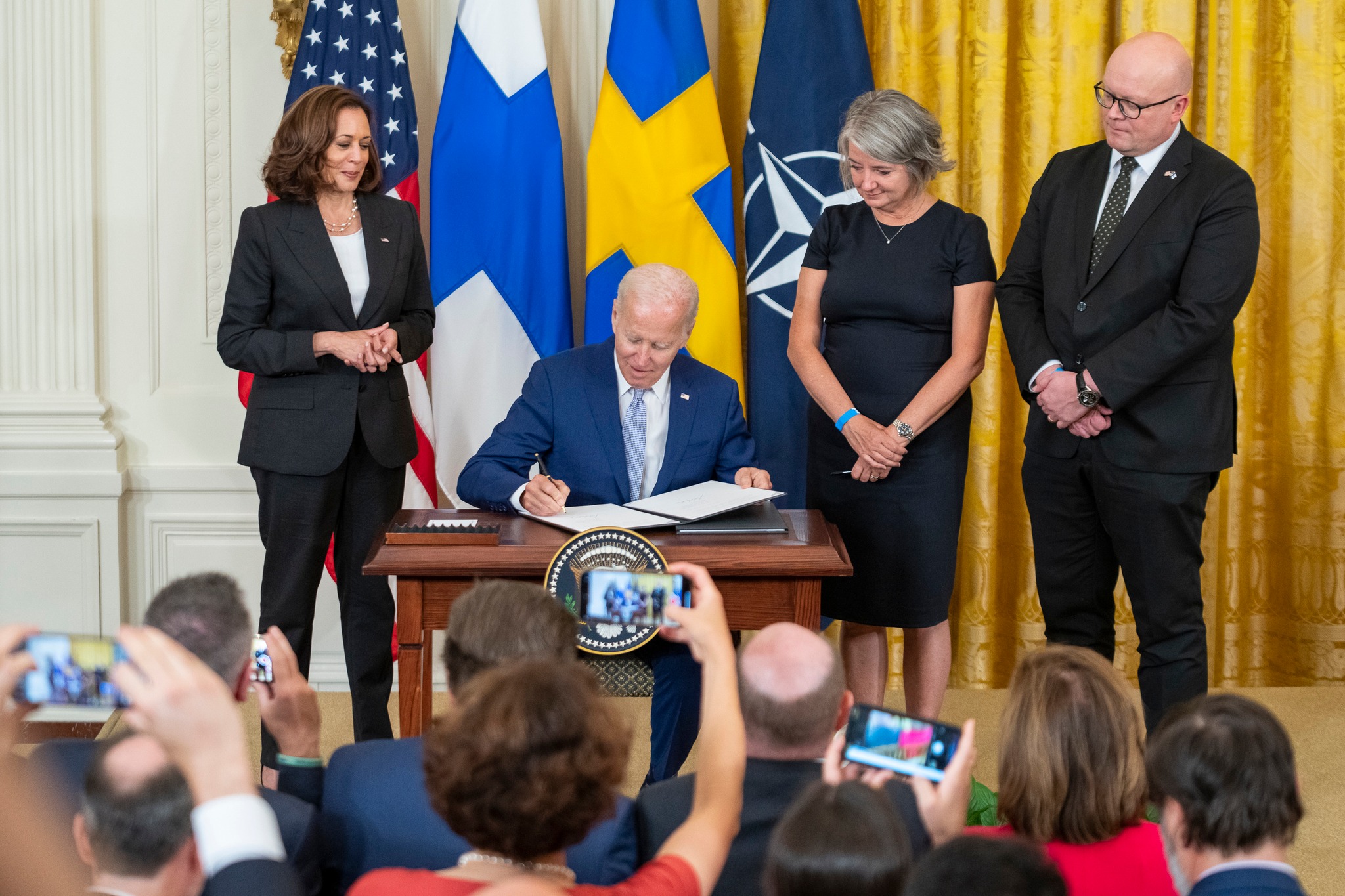 A new Public Policy Polling survey in Wisconsin finds that 55% of voters are concerned — 50% are “very concerned” — about Sen. Johnson’s role in trying to put fake elector documents from Wisconsin and Michigan into the former Vice President’s hands on January 6th.

Matt Lewis: “Donald Trump has left his mark on the American body politic in myriad ways. But one of the lesser-discussed aspects of the way the 45th president forever changed this country is how he’s endowed unqualified idiots with the grandiose confidence to believe they, too, should run for high political office.”

“Some of the year’s most consequential (and highly anticipated) primary battles will be decided tonight in two of the largest states in the country: New York and Florida,” Politico reports.

CNN: “Maloney has told people privately that Nadler is ‘half dead’ and insinuated he won’t be healthy enough to finish another term if he wins, and people associated with her campaign have suggested that Nadler secretly briefly lost consciousness at a campaign stop last week. (His campaign has said that rather than losing consciousness, he tripped on a subway grate.)”

“She’s also urged voters to read a New York Post editorial that called Nadler “senile” and questioned his grip on reality. A Maloney spokesperson declined comment about her various remarks other than to argue she was just quoting the Post editorial rather than using the words herself.”

“Maloney has dodged questions about her comments and her aides have refused to give almost any information about her whereabouts in the closing days of the campaign, arguing that she changes her mind too much to keep track of her.”

FLORIDA GOVERNOR. St. Pete Polls has released its final poll of Tuesday’s Democratic primary for governor, and it finds Rep. Charlie Crist with a huge 59-30 lead over state Agriculture Commissioner Nikki Fried, which is similar to Crist’s 56-24 advantage in St. Pete’s prior poll from early August. Crist has led in nearly every poll this year by varying margins, though St. Pete has long been more bullish for Crist than any other pollster.

Whoever wins Tuesday’s primary, though, will be starting off with an enormous financial deficit against Republican Gov. Ron DeSantis, who had more than $132 million in his war chest following the fundraising period ending Aug. 18. By contrast, both Democrats have largely exhausted their more modest fundraising hauls, leaving Crist with only $1.5 million on hand and Fried with a mere $393,000 in the bank.

WISCONSIN U.S. SENATOR. Republicans have debuted two ads that try to portray Democrat Mandela Barnes as an extremist who threatens public safety. The first spot, from the NRSC, features a clip of Barnes giving the Working Families Party’s response speech to Trump’s 2019 State of the Union address where he praises progressive Reps. Alexandria Ocasio Cortez, Rashida Tlaib, and Ilhan Omar. The ad then links all four together by claiming they want to end cash bail, citing a 2016 bill Barnes sponsored when he was serving in the state Assembly.

The second ad, this time from both the NRSC and GOP Sen. Ron Johnson, more forcefully attempts to paint Barnes as an extremist by linking him to the “socialist squad” as an image of Ocasio Cortez, Omar, and Missouri Rep. Cori Bush appears on screen. The commercial then plays brief clips of Bush and Omar respectively calling for “defunding the police” and for “dismantl[ing] the Minneapolis Police Department” (left unmentioned is that Omar was backing a failed 2021 ballot measure to replace it with a new Department of Public Safety) before arguing that Barnes would join them, though it cites no evidence that Barnes himself favors defunding the police.

The evidence this second ad does cite includes another reference to Barnes’ opposition to cash bail after showing a picture from 2018 of him holding up an “Abolish ICE” t-shirt. Barnes has since said, “I am not a part of the Abolish ICE movement because no one slogan can capture all the work we have to do.”

UTAH U.S. SENATOR. The hardline anti-tax Club for Growth is sending in the cavalry for far-right GOP Sen. Mike Lee, unveiling a $2.5 million ad buy against conservative independent challenger Evan McMullin, who is backed by the state Democratic Party.

As part of that buy, the Club has launched a new ad that accuses McMullin of being a Washington insider who made $500,000 in taxpayer money when working for Republicans (when he was a senior staffer for the House GOP) before he supposedly sold out to liberals for personal profit, claiming that he founded a “liberal” nonprofit that then paid his company $600,000. The Club is likely referring to McMullin’s Stand Up Republic foundation (since renamed the Renew America Movement), which brought together moderate Democrats and pro-democracy conservatives to back centrist candidates against extremists including Donald Trump.

NEVADA U.S. SENATOR and GOVERNOR. Polling on behalf of the Reno Gazette-Journal, Suffolk University finds Democratic Sen. Catherine Cortez Masto fending off Republican Adam Laxalt by 45-38, which is a significant reversal from Laxalt’s 43-40 lead in the school’s previous poll all the way back in April. However, Cortez Masto has narrowly led in each of the few polls released by reputable firms since then.

In the governor’s race, Suffolk finds Democratic incumbent Steve Sisolak with a smaller 43-40 edge over Republican Joe Lombardo, though that’s also an improvement for Sisolak over their April survey, where Lombardo was ahead 39-37. Like his Democratic counterpart in the Senate race, Sisolak has also been narrowly ahead in nearly every poll from a reliable outlet in recent months, though that still only consists of a handful of polls despite the highly competitive nature of both races.

THE NRSC. Following the startling news that the NRSC had slashed at least $13 million from TV ad reservations for Senate races in key battlegrounds, the Washington Post’s Isaac Arnsdorf delves into the sorry finances that forced the committee to make these cuts. You’ll enjoy the many anonymous quotes from Republican operatives savaging the NRSC and its leader, Florida Sen. Rick Scott, but the starkest news came out a day after the article first appeared on Friday.

On Saturday, the committee was required to file its monthly fundraising report with the FEC, which revealed that it had just $23 million on hand at the end of July. By contrast, the DSCC finished the month with $54 million in the bank. Of course, this deficit doesn’t take into account the massive sums pouring in from dark money groups, where the GOP may yet have an advantage: Its top Senate super PAC, the Senate Leadership Fund, had $105 million in its coffers as of June 30, for example, while its Democratic counterpart, the Senate Majority PAC, had $66 million. (SMP, which files reports monthly, saw its cash jump to $73 million by July 31; SLF only files quarterly.)

Still, for a party that began the cycle all but certain it would easily pick up the lone seat it needs to reclaim the majority, it’s a humbling state of affairs. And while the party that controls the White House almost always loses seats in the House in midterm years, it bears noting that the same pattern holds true much less often in the Senate thanks largely to which particular seats are up each year. In fact, the most recent midterm is a valuable case in point: Even though Democrats flipped 41 House seats in 2018, Republicans netted two in the Senate.

CALIFORNIA 9TH CD. Democratic Rep. Josh Harder is airing his first ad of the cycle, which features the candidate standing in his orchard touting his family’s roots in local agriculture and his support for local water rights. Harder says “hell no” to shipping more of the Central Valley region’s water down to Los Angeles and points to his work fighting the “Delta Tunnel Project” recently unveiled by Democratic Gov. Gavin Newsom, who goes unmentioned, while Harder highlights his work with both parties to “build the valley’s first water storage project in 50 years.”

FLORIDA 10TH CD. A last-minute poll from the Democratic firm Data for Progress finds gun safety activist Maxell Alejandro Frost leading state Sen. Randolph Bracy 34-18 for the Democratic nomination in Florida’s open 10th District, with former Rep. Alan Grayson at 14% and former Rep. Corrine Brown at 6%; all others were in the low single digits and 15% were undecided.

FLORIDA 14TH CD. A state appeals court ruled on Friday that the Florida Democratic Party and two voters lacked standing to challenge self-funding businessman Jerry Torres’s appearance on Tuesday’s Republican primary ballot. The decision reverses a trial court ruling, which the appeals court had already stayed pending Torres’ appeal, that had deemed him ineligible because was in Africa when a Mississippi notary claimed he’d been physically present when signing a candidate oath required to file for office. The plaintiffs have yet to say whether they will appeal this latest ruling.

Torres has previously vowed to self-fund up to $15 million on his uphill campaign against Democratic Rep. Kathy Castor in this 59-40 Biden seat in Tampa and St. Petersburg.

INDIANA 2ND CD. Republican leaders in Indiana’s 2nd Congressional District selected businessman Rudy Yakym to replace the late Rep. Jackie Walorski on the November ballot in a gathering on Saturday, choosing him over other alternatives in the first round of voting. The state GOP chair did not release how many votes Yakym won, but he was also nominated for the simultaneous special election for the final two months of Walorski’s term by acclamation.

Yakym had served as Walorski’s finance director a decade ago and had also earned an endorsement from the congresswoman’s husband, Dean Swihart. He will now be the heavy favorite against Democrat Paul Steury in this conservative district in north-central Indiana, which changed minimally in redistricting.