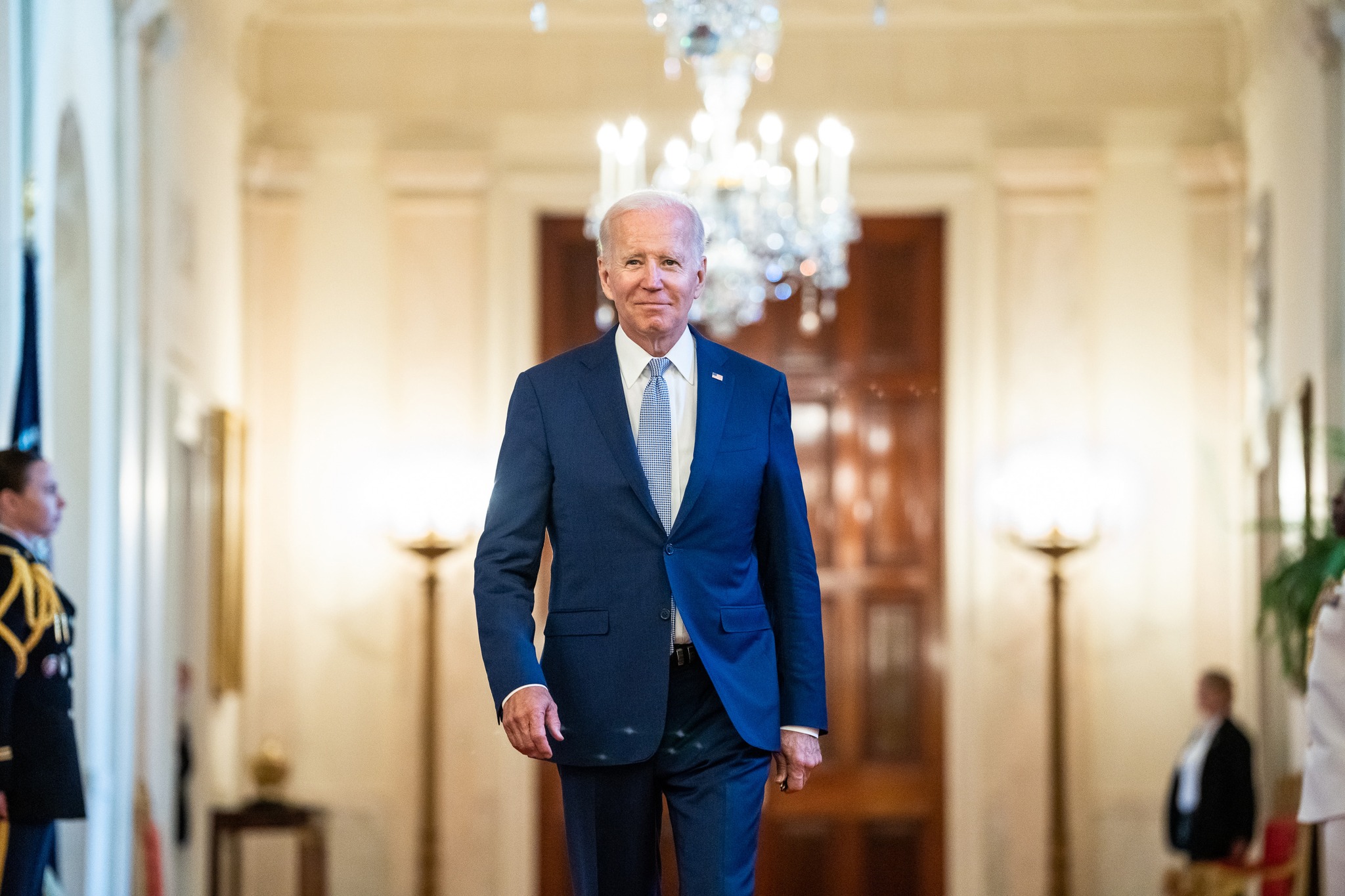 “The initial batch of documents retrieved by the National Archives from former President Donald J. Trump in January included more than 150 marked as classified, a number that ignited intense concern at the Justice Department and helped trigger the criminal investigation that led F.B.I. agents to swoop into Mar-a-Lago this month seeking to recover more,“ the New York Times reports.

“In total, the government has recovered more than 300 documents with classified markings from Mr. Trump since he left office, the people said: that first batch of documents returned in January, another set provided by Mr. Trump’s aides to the Justice Department in June and the material seized by the F.B.I. in the search this month.”

“The specific nature of the sensitive material that Mr. Trump took from the White House remains unclear. But the 15 boxes Mr. Trump turned over to the archives in January, nearly a year after he left office, included documents from the C.I.A., the National Security Agency and the F.B.I. spanning a variety of topics of national security interest.”

“Mr. Trump went through the boxes himself in late 2021, according to multiple people briefed on his efforts, before turning them over.”

“The Justice Department investigation is continuing, suggesting that officials are not certain whether they have recovered all the presidential records that Mr. Trump took with him from the White House.”

“Even after the extraordinary decision by the F.B.I. to execute a search warrant at Mar-a-Lago on Aug. 8, investigators have sought additional surveillance footage from the club, people familiar with the matter said.”

What the initial surveillance footage showed: “It revealed people moving boxes in and out, and in some cases, appearing to change the containers some documents were held in.”

Now we know which Trump lawyer certified they’d turned everything over to the feds: “[Evan] Corcoran then drafted a statement, which [Christina] Bobb, who is said to be the custodian of the documents, signed. It asserted that, to the best of her knowledge, all classified material that was there had been returned, according to two people familiar with the statement.”

Marcy Wheeler does a fantastic job gaming out what might get redacted in the Trump search warrant affidavit.

“Two days after the search of Mar-a-Lago I did a post laying out the likely content of what’s in that search warrant (which pretty accurately predicted what we’ve seen since). Because a warrant affidavit is one of the best ways to show how DOJ and the FBI think of the events of the last 18 months, I wanted to do a second version including all the things we have learned since.”

“The National Archives found more than 700 pages of classified material — including ‘special access program materials,’ some of the most highly classified secrets in government — in 15 boxes recovered from Donald Trump’s Mar-a-Lago estate in January, according to correspondence between the National Archivist and his legal team,” Politico reports.

“The May 10 letter — posted late Monday on the website of John Solomon, a conservative journalist and one of Trump’s authorized liaisons to the National Archives to review papers from his presidency — showed that NARA and federal investigators had grown increasingly alarmed about potential damage to national security caused by the warehousing of these documents at Mar-a-Lago, as well as by Trump’s resistance to sharing them with the FBI.”

“Former President Donald Trump on Monday filed a lawsuit asking a federal judge to appoint a special watchdog to review documents seized from his Florida home earlier this month as part of a criminal investigation of records that had been removed from the White House,” CNBC reports.

“Trump’s lawsuit, which suggests the FBI raid on Aug. 8 was politically motivated, also asks the judge to block the Department of Justice from ‘further review of seized materials’ from his Mar-a-Lago residence until the so-called special master is appointed to review those documents.”

“When the Supreme Court restricted the ability of the Environmental Protection Agency to fight climate change this year, the reason it gave was that Congress had never granted the agency the broad authority to shift America away from burning fossil fuels,” the New York Times reports.

“Throughout the landmark climate law, passed this month, is language written specifically to address the Supreme Court’s justification for reining in the E.P.A., a ruling that was one of the court’s most consequential of the term. The new law amends the Clean Air Act, the country’s bedrock air-quality legislation, to define the carbon dioxide produced by the burning of fossil fuels as an ‘air pollutant.’”

“That language, according to legal experts as well as the Democrats who worked it into the legislation, explicitly gives the E.P.A. the authority to regulate greenhouse gases and to use its power to push the adoption of wind, solar and other renewable energy sources.”

That effectively reverses the Supreme Court decision earlier this year in West Virginia v. EPA, which found that Congress had not explicitly authorized the EPA to regulate carbon dioxide emissions.

“Tucked into the Inflation Reduction Act that President Biden signed last week is a major expansion of federal loan programs that could help the fight against climate change by channeling more money to clean energy and converting plants that run on fossil fuels to nuclear or renewable energy,” the New York Times reports.

“The law authorizes as much as $350 billion in additional federal loans and loan guarantees for energy and automotive projects and businesses. The money, which will be disbursed by the Energy Department, is in addition to the more well-known provisions of the law that offer incentives for the likes of electric cars, solar panels, batteries and heat pumps.”

“Moscow sees no possibility of a diplomatic solution to end the war in Ukraine and expects a long conflict, a senior Russian diplomat has warned, as President Vladimir Putin’s full-scale invasion reaches the six-month mark this week,” the Financial Times reports.

Former NBA player Dennis Rodman said he plans to travel to Russia this week to aid in the release of WNBA star Brittney Griner, NBC News reports. Said Rodman: “I got permission to go to Russia to help that girl. I’m trying to go this week.”

“China continues to expand its reliance on Russian energy, with purchases of crude, oil products, gas and coal rising to $35 billion since the war in Ukraine began, from about $20 billion a year earlier,” Bloomberg reports.

Donald Trump on Truth Social: “Why do Republicans Senators allow a broken down hack politician, Mitch McConnell, to openly disparage hard working Republican candidates for the United States Senate. This is such an affront to honor and to leadership. He should spend more time (and money!) helping them get elected, and less time helping his crazy wife and family get rich on China!”

Sen. Mitch McConnell (R-KY) said there is “very little election fraud” but that it “happens occasionally,” comments that clashed with ongoing claims from former President Donald Trump’s wing of the party, which has insisted that voter fraud is rampant and the 2020 election was stolen, NBC News reports.

“White House officials have been weighing – and leaning toward – the cancellation of up to $10,000 in student loan debt per borrower tied to an income threshold,” CNN reports.

“The plan is designed to offer the forgiveness to individuals who earn less than $125,000 per year.”

“In addition to that baseline of student loan debt forgiveness for individuals who fall under a certain income level, administration officials have also recently discussed the possibility of additional forgiveness for specific subsets of the population.”

Martin Hyde (R), who is running for Congress in Florida’s 16th congressional district, “says he would have killed the FBI agents who searched…  Trump’s property if they tried to do the same thing to his home,” the Sarasota Herald-Tribune reports.

Florida state House candidate Luis Miguel (R) “was suspended from Twitter after a tweet advocating that Floridians should be able to shoot federal agents on sight,” Florida Politics reports.

Pennsylvania gubernatorial candidate Doug Mastriano (R) “has surrounded himself with a non-professional, armed security team whose members include at least one person with direct ties to a militia group,” Lancaster Online reports.

“Mastriano’s detail includes several members of a relatively new evangelical church near Elizabethtown, LifeGate, whose leaders have spoken openly about electing Christians to office to advance biblical principles in government.”

Tennessee Gov. Bill Lee (R) on Monday said Tennessee is focused on implementing its total abortion ban on Thursday, which will prohibit all abortions with no exceptions for rape or incest, the Tennessean reports.

The law threatens doctors with criminal charges for any abortion performed, critics say, even when a patient’s life is in danger.

“Twitter executives deceived federal regulators and the company’s own board of directors about ‘extreme, egregious deficiencies’ in its defenses against hackers, as well as its meager efforts to fight spam, according to an explosive whistleblower complaint from its former security chief,” the Washington Post reports.

“The complaint from former head of security Peiter Zatko, a widely admired hacker known as ‘Mudge,’ depicts Twitter as a chaotic and rudderless company beset by infighting, unable to properly protect its 238 million daily users including government agencies, heads of state and other influential public figures.”

Associated Press: “The resignations have more broadly made the county of roughly 27,000 residents — which overwhelmingly backed former President Donald Trump in 2020 — an extraordinary example of the fallout resulting from threats to election officials. Officials and voting experts worry that a new wave of harassment or worse will return in November, fueled by false claims of widespread fraud.”

“For months, Mr. Bolsonaro has attacked Brazil’s electronic voting machines as rife with fraud — despite virtually no evidence — and Brazil’s election officials as aligned against him. He has suggested that he would dispute any loss unless changes are made in election procedures. He has enlisted Brazil’s military in his battle. And he has told his tens of millions of supporters to prepare for a fight.”

Said Bolsonaro, in a recent speech: “If need be, we will go to war.”

“President Joe Biden spoke Sunday with fellow Western leaders looking to revive a nuclear deal with Iran, as the US weighs a response to Tehran’s position on the latest proposal,” Bloomberg reports.