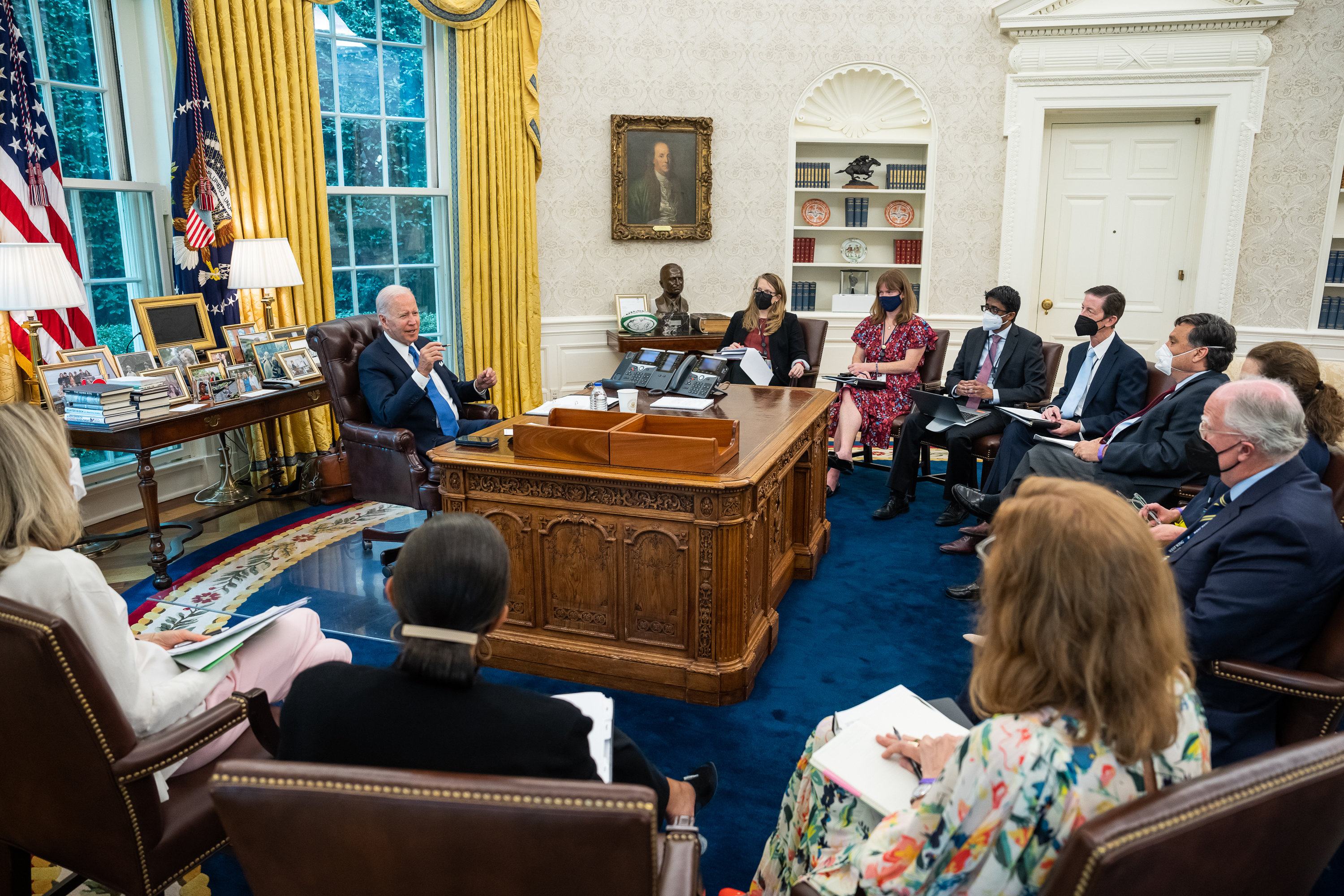 A new NBC News poll finds 68% of Republicans “express a high level of interest in the upcoming election — registering either a ‘9’ or ‘10’ on a 10-point scale — versus 66% for Democrats.”

Playbook: “It’s been a long time (months? years?) since we’ve seen national Democrats in such a good mood about their electoral chances. Over the last few weeks — amid a spate of legislative movement, falling gas prices, stumbling Republican Senate candidates and the sense of a growing backlash to efforts to restrict abortion — the fight for control of Congress seems to have tightened. Gone are the days when pundits confidently predicted a red tsunami.”

Here’s big poll dump from the U.S. Term Limits organization in House races. All are from the Republican pollster RMG Research, which botched Democrats’ names in two of their surveys: In Pennsylvania’s 7th, they misspelled Susan Wild’s name as “Wilde,” while in North Carolina’s 13th, they called Wiley Nickel “Wally.”

In each case, the sponsor says that Republicans have signed their pledge to support term limits and Democrats have not, except in Pennsylvania’s 1st and Texas’ 15th, where it says the reverse is the case.

“The tweets were from Oz’s career as a television doctor, but appear to have been migrated to his US Senate campaign Twitter account.”

NEW YORK 2ND CD. The DCCC has shared an internal poll conducted in late July by GQR that finds Republican Rep. Andrew Garbarino with just a 49-48 lead on Democrat Jackie Gordon in New York’s 2nd Congressional District. This is the first data either side has released on the race for this Long Island-based district on south shore of Suffolk County, which would have voted just 50-49 for Donald Trump under the new lines.

NEW HAMPSHIRE 1ST CD. Former Trump staffer Karoline Leavitt has responded to two recent polls that had her down big in next month’s GOP primary with a Remington Research Group survey that has her tied at 21 apiece with 2020 nominee Matt Mowers, who is also a former Trump White House aide. A poll for the Congressional Leadership Fund had put Mowers up 37-13, while another for the conservative news site NH Journal had found him ahead by a somewhat smaller 31-16  margin. However, a survey from Saint Anselm College showed Mowers leading only 25-21.

MICHIGAN 8TH CD. The Kevin McCarthy-aligned Congressional Leadership Fund has launched a new ad attacking Democratic Rep. Dan Kildee over what it calls wasteful stimulus spending, skewering him for voting to give “millions” to golf courses, ski slopes, and “terrorists” like the Boston Marathon bomber.

However, that last claim conflates the millions of dollars loaned to a wide range of businesses to help the economy recover from the pandemic with the mere $1,400 checks that were sent to individual Americans, including convicted bomber Dzhokhar Tsarnaev. Tsarnaev is serving a life sentence, and a federal judge earlier this year had already ordered that his check be turned over to help pay the victims of his crimes.

PENNSYLVANIA 17TH CD. Hotline has gotten its hands on a month-old Lake Research internal for Democratic attorney Chris DeLuzio that shows him just barely edging out his Republican opponent, businessman Jeremy Shaffer, by a 43-42 margin. A couple of polls from the springtime, including one from the DCCC and another from U.S. Term Limits, also found a similarly tight race. Pennsylvania’s 17th, located in the Pittsburgh suburbs, would have voted 52-46 for Joe Biden, which is an improvement for Democrats compared to Biden’s 51-48 margin under the old lines.

NEVADA U.S. SENATOR. In what’s certain to be a recurring theme in Republican ads this year, the far-right Club for Growth is putting $2 million behind a spot attacking Democratic Sen. Catherine Cortez Masto over the newly enacted Inflation Reduction Act. The ad features ominous footage of an army of G-men in black suits—strongly reminiscent of the “agents” from The Matrix films—while the narrator warns of “87,000 new IRS agents” coming for the middle class.

Republican officeholders and media figures have widely tried conjuring up the boogeyman of jackbooted IRS thugs coming to oppress middle class taxpayers since the law’s passage. But even Trump-appointed IRS Director Charles Rettig has stated that the agency would not crack down on those making less than $400,000, explaining that the beefed up enforcement of tax evasion would only target corporations and the richest 1-2% of households.

The IRS will reportedly also use the new funds, which comes after a decade of Republican-backed budget cuts left the agency with nearly 20% less funding than in 2010, to replace many of the nearly 50,000 of its employees who could retire over the next five years. Many of the thousands of newly created IRS jobs beyond those positions would be in customer service and information technology—hardly the tens of thousands of armed enforcement agents that Republicans are whipping up paranoia over.

“For years, Democrats warned that abortion rights were under grave threat. Across the US, antiabortion activists in red states chipped away at access and pushed for conservative judges to secure their gains. Yet for many Americans, the prospect of losing the constitutional right to abortion that had existed since 1973 remained worrying but remote,” The Guardian reports.  “That all changed in June, when in Dobbs v Jackson, the supreme court overturned Roe v Wade, the 49-year-old ruling which had established the right.”

“Since then, bans have taken effect in at least 10 states. Republicans are rushing ahead with new restrictions and stirring fears that other rights, including same-sex marriage and access to contraception, could be vulnerable too.”

“And yet, from rural Minnesota to ruby red Kansas and a conservative corner of Nebraska, there are signs of a brewing backlash that Democrats believe will reshape the battle for control of Congress and statehouses this fall.”

TEXAS GOVERNOR. Washington Post: “Maybe it’s a fool’s errand or just a kamikaze mission of hope, but Beto is holding more than 70 public events in 49 days trying to convince people in mostly small, rural and often incredibly red towns around the state that he should be their next governor. It’s part of a campaign strategy fueled by the fact that four years ago he came closer than any Democrat in a generation to winning a statewide office in his Senate race — within 220,000 votes, or 2.6 percent. Which in Texas counts as close.“

“Beto is targeting GOP strongholds that former president Donald Trump won with 70, 80 or even 90 percent of the vote just two years ago, making his schedule public and inviting the entire community to join.”

Rep. Liz Cheney (R-WY) told ABC News that she intends to use her new political organization to combat the campaigns of Republicans who support former President Donald Trump and his unfounded claims around the 2020 election.

NORTH CAROLINA SUPREME COURT. In a remarkable decision, the North Carolina Supreme Court ruled on Friday that because the state legislature was unconstitutionally gerrymandered, Republican lawmakers may have lacked the power to approve amendments to the state constitution and put them before voters.

The ruling, which the court’s 4-3 Democratic majority issued along party lines, stopped short of granting the plaintiffs’ requests to strike down two amendments Republicans passed in 2018—one to require photo voter ID and another to cap any state income tax at 7%. The justices instead returned the case to the trial court for further findings, though its framing of the dispute indicates that there’s a strong likelihood the state courts will ultimately invalidate the amendments.

At the heart of this case is the fact that a large number of legislative districts had already been struck down in 2017 after federal courts found they illegally discriminated against Black voters. However, Republicans who had been elected under the unconstitutional maps used their supermajorities to place their amendments on the ballot the following year, when they were ultimately approved by voters.

The plaintiffs, who are backed by the NAACP, made the unusual—but not unprecedented—argument that the GOP’s widespread illegal gerrymandering rendered the legislature a “usurper” that legally lacked the power to amend North Carolina’s foundational governing document because it had “lost its claim to popular sovereignty.” A lower court agreed in 2019 by striking down the two amendments, but a 2-1 Republican majority on the state Court of Appeals reversed that ruling along party lines in 2020, leading the plaintiffs to appeal to the state Supreme Court.

The majority was sympathetic to the plaintiffs’ claims, ruling that the state constitution “impose[d] limits” on an improperly constituted legislature to initiate the constitutional amendment process. However, it sent the case back to the trial court, ordering the judge to determine whether the GOP owed its supermajorities to the gerrymandered maps and whether the amendments discriminate against the same type of voters who had been discriminated against by the original gerrymandering in the first place. It’s likely that the lower court will find that the answer to these questions is “yes” and once again strike down the amendments.

The dissent cast furious aspersions on the motives of the majority, and Republicans reacted with predictable anger. State House Speaker Tim Moore decried the ruling as a “judicial coup” and vowed to keep fighting the decision, which could mean potentially appealing to the U.S. Supreme Court.

They will also have the chance to undo this ruling by means of the ballot box. In November, two Democratic seats on the state Supreme Court are up: Democratic Justice Sam Ervin IV faces Republican attorney Trey Allen, while Court of Appeals Judge Lucy Inman is attempting to hold on to an open Democratic seat against a fellow Court of Appeals Judge, Republican Richard Dietz. If Republicans win either seat, they would regain the court majority that they lost in 2016, paving the way for a string of reversals not only in this case but in many others.