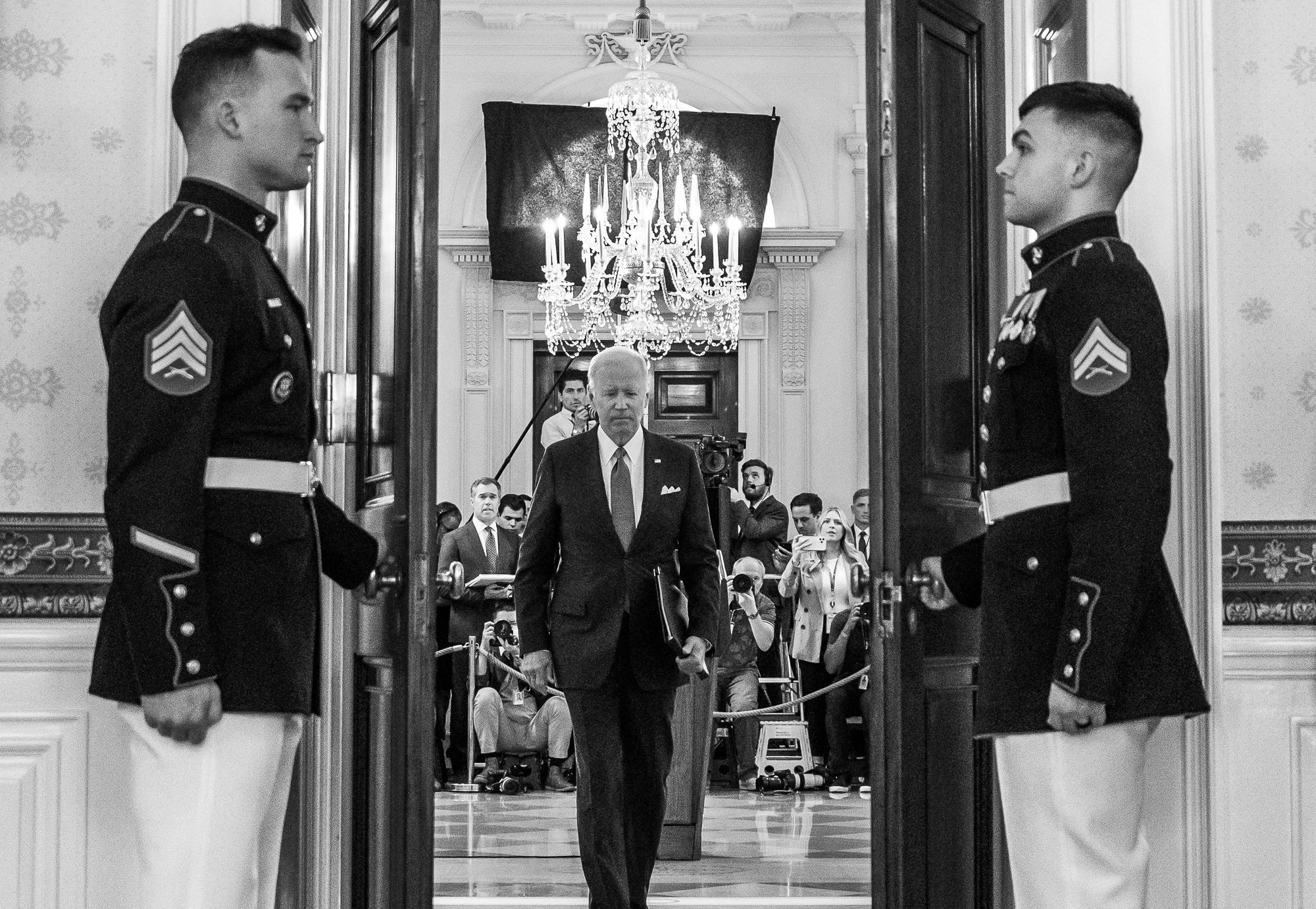 “When FBI agents found top secret documents at Donald Trump’s Mar-a-Lago estate, the former president and his staff claimed the docs were actually declassified by a mysterious “standing” declassification rule. Now, the feds are investigating Trump’s alibi to see if anyone besides Trump heard about it,” Rolling Stone reports.

“Two people familiar with the matter tell Rolling Stone that the FBI has begun asking former Trump administration officials whether they’ve heard of the so-called ‘standing order’ Trump claims to have given.”

Key takeaway: “It’s unclear why a sitting president, who as commander-in-chief was privy to any classified information, would need to declassify work brought to the White House private residence.”

Vox: “Keeping track of all the criminal investigations of Donald Trump isn’t easy, so we did it for you.”

Said McConnell: “I think there’s probably a greater likelihood the House flips than the Senate. Senate races are just different — they’re statewide, candidate quality has a lot to do with the outcome.”

He added: “Right now, we have a 50-50 Senate and a 50-50 country, but I think when all is said and done this fall, we’re likely to have an extremely close Senate, either our side up slightly or their side up slightly.”

“In the final days before the invasion of Ukraine, Russia’s security service began sending cryptic instructions to informants in Kyiv. Pack up and get out of the capital, the Kremlin collaborators were told, but leave behind the keys to your homes,” the Washington Post reports.

“The directions came from senior officers in a unit of Russia’s Federal Security Service (FSB) with a prosaic name — the Department of Operational Information — but an ominous assignment: ensure the decapitation of the Ukrainian government and oversee the installation of a pro-Russian regime.”

“The messages were a measure of the confidence in that audacious plan. So certain were FSB operatives that they would soon control the levers of power in Kyiv, according to Ukrainian and Western security officials, that they spent the waning days before the war arranging safe houses or accommodations in informants’ apartments and other locations for the planned influx of personnel.”

Susan Glasser: “The conventional wisdom in Washington would indicate that the Democrats are all but certain to lose the House in 2022, and very likely the Senate, too. The yearlong collapse in Joe Biden’s approval ratings has been seen as a virtual guarantee of this outcome. Biden has become the most politically unpopular leader at this point in a Presidency since the advent of modern polling—even more unpopular than Trump was during the “blue wave” election of 2018. That and a worst-in-four-decades inflation outbreak on Biden’s watch have convinced almost all political observers that the elections this fall are a sure thing for Republicans.”

“But, over the summer, a new school of what might be called “Trumptimism” has taken hold among some Democratic strategists and independent analysts. In the mess of our current politics, they discern a case for optimism—history-defying, experience-flouting optimism that maybe things won’t work out so badly after all in November.”

Said Democratic strategist Simon Rosenberg: “In the age of Trump, nothing is normal. Nothing is following traditional physics and rules, so why would this midterm?”

“The charges mark the opening salvo from the Office of Election Crimes and Security, which from its conception drew widespread criticism from Democrats and voting rights groups who feared the unit would serve as a political tool for the governor.”

“We now have a presidency where the president has delivered the largest economic recovery plan since Roosevelt, the largest infrastructure plan since Eisenhower, the most judges confirmed since Kennedy, the second largest health care bill since Johnson, and the largest climate change bill in history. … The first time we’ve done gun control since President Clinton was here, the first time ever an African American woman has been put on the U.S. Supreme Court. … I think it’s a record to take to the American people.”  — White House chief of staff Ron Klein, in an interview with Politico.

Jonathan Bernstein: “Lots of things are broken right now in US politics. The good news is that there’s new evidence that one important thing is working just fine: When bad things happen presidents get less popular, and when good things happen? Their approval ratings improve.”

“No one can prove why Biden’s numbers have bounced back, but two major drags on American life during his presidency — gas prices and Covid-19 cases — are finally dropping at the same time in recent weeks. Jobs, meanwhile, remain strong while overall inflation is still high, but tailing off. As a result, overall perceptions of the economy are rising.”

Philip Bump: “Trump was willing to be the voice of the fringe. He was willing to parrot it back to the base, what they were hearing on Breitbart, and what they’re hearing on Fox News, in a way that the establishment wouldn’t, right? And that has been his success ever since. He’s been engaging and rallying the far right of the Republican Party that didn’t feel like they had a voice, justifiably, in politics.”

“And that’s what DeSantis is doing as well. He’s really playing to that same far right and he is, in the same way that Donald Trump was Breitbart to the establishments, Fox News in 2016.”

“Now, Breitbart is, you know, almost establishment-esque to some extent, and Ron DeSantis is Infowars, right?”

“I mean, so it is this constant, okay, I’m going to engage where this most fervent element of the base is, and we call that Trumpism, but it’s, you know, really just the fringe, and engaging the fringe has proven to be a successful strategy for winning elections. And I think that’s what DeSantis is doing.”

The Biden administration is “planning for an end to its practice of paying for Covid-19 shots and treatments, shifting more control of pricing and coverage to the healthcare industry in ways that could generate sales for companies — and costs for consumers — for years to come,” the Wall Street Journal reports.

Chinese President Xi Jinping and Russian leader Vladimir Putin are both planning to attend a Group of 20 summit in the resort island of Bali later this year, Bloomberg reports.

“Indonesia’s president Joko Widodo said in an interview broadcast on Bloomberg that the Chinese and Russian leaders told him they would come to the conference, setting up a potentially difficult series of meetings as governments clash over Putin’s invasion of Ukraine. Relations have also soured further between Beijing and Washington in recent weeks following US House Speaker Nancy Pelosi’s controversial visit to Taiwan and China’s unprecedented military drills around the island in response.”

Molly Ball has a good profile of Utah Gov. Spencer Cox (R), who does not seem like a typical Republican.

“High energy and bald-headed, Cox is an avid reader whose media diet skews Acela Corridor. Over the course of our interviews, he will name-drop the New York Times columnists Thomas Friedman and Ezra Klein, the political theorist Jonathan Haidt and articles from The Atlantic. His conversation is littered with pop-intellectual buzz phrases: ‘deaths of despair,’ ‘happiness gap,’ ‘empathy crisis,’ ‘trust barometer.’ He’s the kind of politician who quotes George Will in speeches and answers questions with an eager, ‘You want to hear my theory? Because I think a lot about this stuff.’”

“Rep. Elise Stefanik of New York, the No. 3 ranking House Republican, is going to run again for the leadership,“ Punchbowl News reports.

“Former president Donald Trump bombarded his supporters with more than 100 emails asking for money based on the FBI’s search of his Florida Mar-a-Lago Club for classified materials last week. They paid off,” the Washington Post reports.

“Contributions to Trump’s political action committee topped $1 million on at least two days after the Aug. 8 search, according to two people familiar with the figures. The daily hauls jumped from a level of $200,000 to $300,000 that had been typical in recent months.”