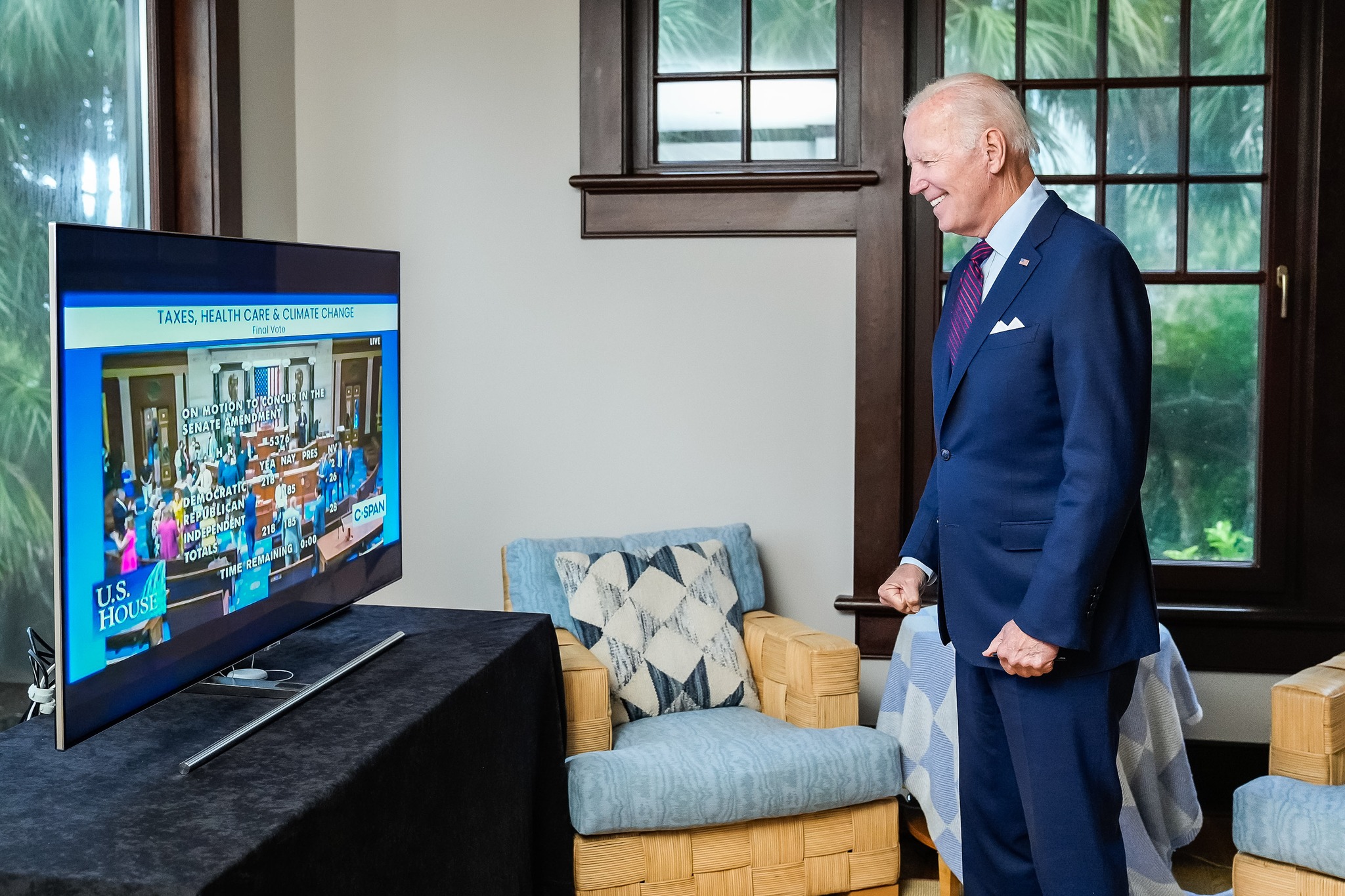 President Biden’s approval rate in the polling averages is up by 2.6 percentage points since it bottomed out on July 26.

A new YouGov poll finds Americans overwhelmingly approve of the FBI’s search of former President Donald Trump’s Mar-a-Lago beach club to retrieve classified documents that he took from the White House, 54% to 36%.

“Twelve weeks before the midterm elections, Republicans’ hopes of retaking the Senate rest on a slate of Donald Trump’s hand-picked nominees. And, across the board, they appear to be struggling,” Playbook reports.

“Yes, it’s still early. Yes, Democrats have been on a bit of a winning streak lately. And, yes, plenty is going to change before Nov. 8. But with only one competitive state (New Hampshire) yet to select its Senate nominee, the picture is clear: Democrats across the country are finding ways to run ahead — sometimes well ahead — of Joe Biden’s approval ratings.”

The Cook Political Report says the race for Senate control is now a Toss Up.

“Plagued with weak, divisive candidates in many key races, the palpable trepidation among a dozen GOP insiders we spoke to is that — despite a favorable political climate and history that shows they should be able to net at least one seat to break the 50-50 logjam — their efforts to win back Senate control will fall short even as Republicans easily flip the House.”

“I can tell you that I’ve never spoken to a Pennsylvanian who doesn’t know how many houses they have — let alone be off by 8. He just doesn’t get it. This dude is not one of us.” — Pennsylvania U.S. Senate candidate John Fetterman, quoted by the Washington Post, on reports that rival Mehmet Oz owns 10 houses.

Pennsylvania U.S. Senate candidate Mehmet Oz (R) told Newsmax that he was “exhausted” when he made a video that went viral this week showing him shopping for ingredients for “crudité” while mispronouncing the name of the grocery store.

Said Oz: “I was exhausted. When you’re campaigning 18 hours a day you, listen, I’ve gotten my kids’ names wrong as well. I don’t think that’s a measure of someone’s ability to lead the commonwealth.”

PENNSYLVANIA U.S. SENATOR and GOVERNOR. Pittsburgh Works Together, a group that describes itself as a “cooperative venture of business and labor,” has publicized a poll from the GOP firm Public Opinion Strategies that gives Democrats huge leads in both of the commonwealth’s major statewide contests: John Fetterman outpaces Republican Mehmet Oz 51-33 in the Senate race, while Josh Shapiro enjoys a 50-35 edge over Doug Mastriano for governor.

A late July survey for Fox News from a bipartisan team of pollsters showed Fetterman and Shapiro ahead 47-36 and 50-40, respectively.

Of the ten House Republicans who voted to impeach him in January 2021, just two have survived to run in the general election — Reps. David Valadao (R-CA) and Dan Newhouse (R-WA).

But there’s a good reason and it’s not because these two lawmakers have superior political skills.

Valadao and Newhouse happen to live in states where all candidates run on the same ballot and the top two move on to the November election. There are no traditional party primaries.

Supporters of ranked-choice voting and top-two primary systems have long suggested it would help moderate our increasingly polarized political system.

That’s because instead of paying outsized attention to a party’s base voters — who tend to be the most ideologically extreme — candidates have more incentive to appeal to a broader coalition.

That’s why Valadao and Newhouse survived their primaries. If they were forced to compete in a traditional party primary — like Rep. Liz Cheney (R-WY) did last night — they almost certainly would have ended up losers on Trump’s revenge scorecard too.

And that Revenge Scorecard is as follows:

Sen. Lisa Murkowski (R-AK), the only Republican senator who convicted Trump in the impeachment trial to face a primary this year, survived her primary against Trump endorsee Kelly Tshibaka. However, they’ll both be facing off against each other again in the general election due to Alaska’s “top four” voting system.

Sen. Ron Johnson (R-WI) said that a man who fraudulently sought absentee ballots to prove voter fraud exists, shouldn’t be prosecuted, the Milwaukee Journal Sentinel reports. Said Johnson: “I certainly wouldn’t prosecute whatever he did. I appreciate what he did. I think he did the public a service showing a vulnerability that obviously WEC isn’t concerned about.”

WYOMING AT LARGE CD. Rep. Liz Cheney (R-WY) told Politico that her concession call to Harriet Hageman (R) ended up being a “clear and direct” voicemail that she left before she went on stage last night, after trying multiple times to get in touch with her. Cheney said she still has not heard anything back.

Depending upon how you slice the numbers, Rep. Liz Cheney’s (R-WY) Republican primary loss last night might be the biggest incumbent loss of the 21st century, the Washington Post reports.

RHODE ISLAND GOVERNOR. Fleming & Associates is out with a look at the infrequently-polled Sept. 13 Democratic primary for Roger Williams University and WPRI, and it shows Gov. Dan McKee holding a narrow 28-25 advantage over Secretary of State Nellie Gorbea. Former CVS executive Helena Foulkes and former Secretary of State Matt Brown are further back with 14% and 8%, respectively, while a hefty 21% of respondents remain undecided.

Fleming showed McKee holding off Gorbea by a similar 25-23 margin back in May as Brown grabbed 7%, though Foulkes has more than doubled her 6% share since then. However, we’ve seen just two polls during the intervening time. A Suffolk University survey in late June gave Gorbea a 24-20 advantage over the incumbent, who was elevated from lieutenant to governor last year when Gina Raimondo resigned to become U.S. secretary of commerce, with Foulkes at 16%. The secretary of state went on to release a late July internal from Lake Research Partners that put her ahead of McKee 27-22, while Foulkes was similarly situated at 14%.

While all of these surveys agree that the contest is tight, though, no one has aired any negative TV ads yet. Gorbea went up with a new commercial just before this newest poll was publicized that emphasizes her support for abortion rights but does not mention any of her rivals. Brown, meanwhile, is spending what WPRI’s Ted Nesi reports is a $50,000 opening buy that touts both him and state Sen. Cynthia Mendes, who is running for lieutenant governor, as a progressive team. (Candidates for governor and lieutenant governor run in separate primaries and general elections, but Brown and Mendes are campaigning as an informal ticket.)

McKee, meanwhile, goes into the final days of the race with a larger war chest than any of his opponents. We’ve summarized the newest fundraising reports, which cover the period from July 1 to Aug. 15, below:

While Foulkes doesn’t currently have much left, Nesi writes that “last week her campaign indicated plans to spend an additional $1.2 million by the day of the primary,” so she may plan to put much more of her money into her campaign. McKee will also be getting some outside help soon from a group called Forward Rhode Island that has received $500,000 in contributions from his allies at the Laborers union. The spots aren’t available yet, but Nesi says the first one is a “positive commercial touting McKee’s record in office.”

The eventual nominee will go up against businesswoman Ashley Kalus, who faces no serious opposition in her Republican primary. Kalus, who has been self-funding almost all of her campaign’s budget, brought in just $10,000 from donors over the last month-and-a-half but spent another $860,000 and had $250,000 left over.

KANSAS GOVERNOR and U.S. SENATOR. The Republican firm Battleground Connect has conducted a survey for John Brown Freedom Fund, which supports Republican Derek Schmidt in the governor’s race, that gives their man a 48-45 edge over Democratic incumbent Laura Kelly; another 2% goes to state Sen. Dennis Pyle, a former Republican who is campaigning as an independent. This poll, which is the first we’ve seen here in nearly four months, also shows GOP Sen. Jerry Moran beating Democrat Mark Holland 58-37 in a contest that has attracted little attention.

OHIO GOVERNOR. The RGA has launched a new TV ad going after Democrat Nan Whaley’s record on tax increases and crime as the former mayor of Dayton. The ad is backed by $570,000, which is on top of the $2.25 million that the RGA invested here to help Republican Gov. Mike DeWine win his primary earlier this spring. The Cleveland Plain Dealer reports that the RGA has received $1.4 million in contributions from “donors who either received a state appointment from DeWine or have received state contracts,” which may explain why it’s getting involved in a race that most observers see as heavily favoring the incumbent.

“The wealthy DeVos family is pouring millions of dollars into its long established political network to help Republican candidate Tudor Dixon overtake Michigan Democratic Gov. Gretchen Whitmer in what could be one of the most expensive races in the 2022 midterm elections,” CNBC reports.

“The Senate Leadership Fund is reserving $28 million worth of TV and radio ads that will air statewide, the group announced Thursday. That’s a huge escalation of the roughly $5 million national Republicans have spent in Ohio so far in the race between Republican J.D. Vance and Democratic U.S. Rep. Tim Ryan. The ads will start after Labor Day, the unofficial start of the most intense part of a general-election campaign season.”

This is a clear indication Republicans are worried about J.D. Vance’s ability to win in a solid red state.

MAINE GOVERNOR. Former Maine Gov. Paul LePage (R), who is seeking his hold job, threatened to “deck” a Maine Democratic Party staffer who was filming him, the Daily Beast reports. Said LePage: “Six feet away, or I’m going to deck you. If you come into my space, you’re going down.”

Associated Press: “For decades, Republicans… appealed to conservative voters — and donors — with broad condemnation of abortion. But the Supreme Court’s decision is forcing Republicans from state legislatures to Congress to the campaign trail to articulate more specifically what that opposition means, sometimes creating division over where the party should stand…”

“Some experts say the inconsistency among Republicans about how to move forward underscores how new the debate is — and how unprepared the party was for it.”

“A Republican group in Alabama is apologizing after accidentally using a picture of the GOP elephant that contained Ku Klux Klan  imagery,” the AP reports.

“Planned Parenthood, the nation’s leading reproductive health care provider and abortion rights advocacy organization, plans to spend a record $50 million ahead of November’s midterm elections, pouring money into contests where access to abortion will be on the ballot,” the AP reports.

“In a few short years, TikTok has grown into one of the fastest-growing social networks in the world — and with the 2022 midterm election cycle heating up, the app is now preparing to take on the maddening problem of election misinformation,” The Verge reports.