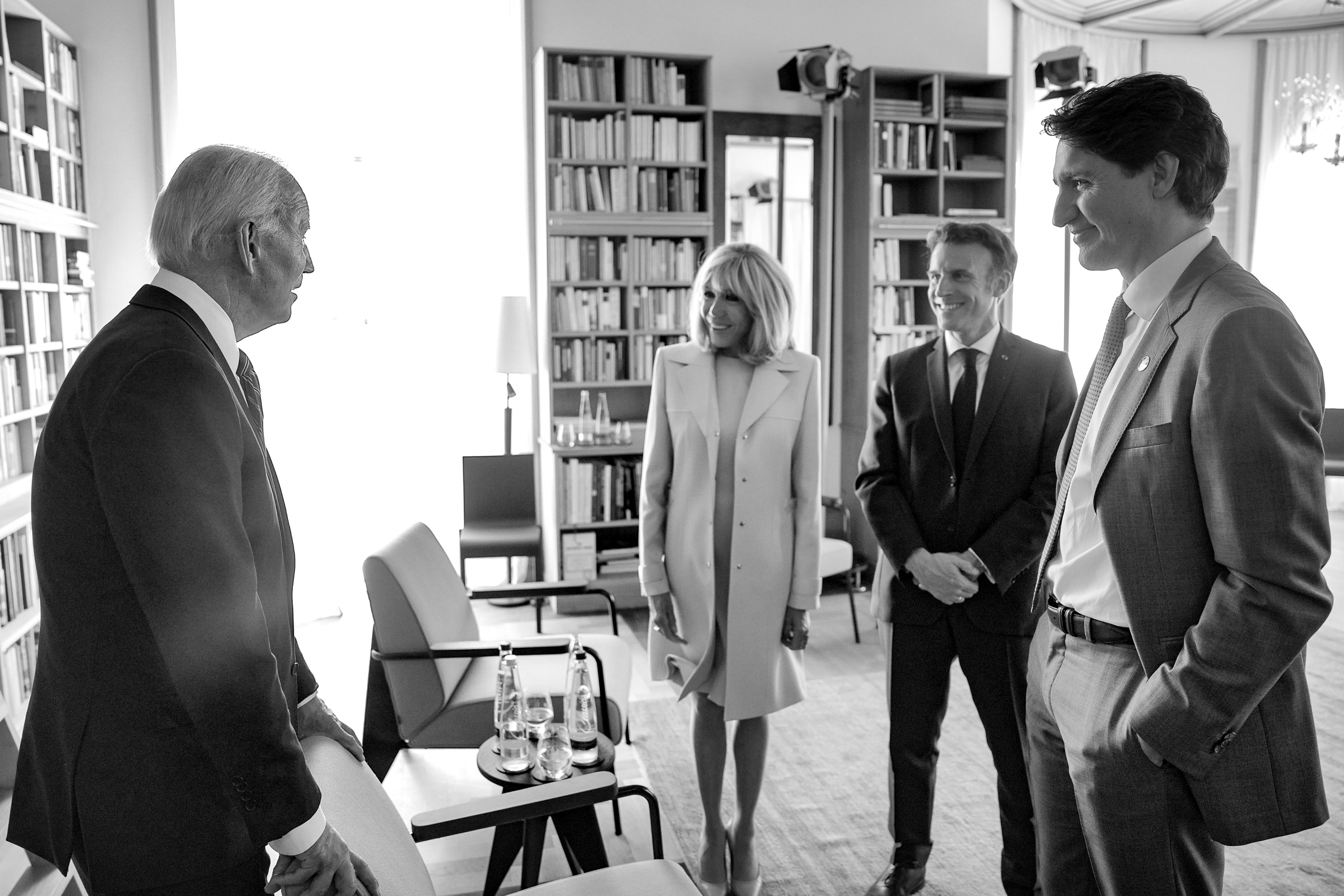 “Former president Donald Trump and close aides have spent the eight days since the FBI searched his Florida home rushing to assemble a team of respected defense lawyers. But the answer they keep hearing is ‘no,’” the Washington Post reports.

“The struggle to find expert legal advice puts Trump in a bind as he faces potential criminal exposure from a records dispute with the National Archives that escalated into a federal investigation into possible violations of the Espionage Act and other statutes.”

Said one prominent Republican lawyer: “Everyone is saying no.”

“Allen Weisselberg, the Trump Organization’s finance chief, will say in Manhattan court Thursday that he conspired with several of the ex-president’s companies when he pleads guilty to state tax crimes,” Rolling Stone reports.

“As part of Weisselberg’s plea deal, he has agreed to testify against The Trump Corporation and the Trump Payroll Corporation at trial, which is scheduled for October.”

“This possible testimony, which allegedly implicates Trump’s businesses, could be key to prosecutors’ securing a guilty verdict against these companies. When a company is found to have engaged in criminal conduct, significant fines can pile up quickly — potentially leading to its demise.”

New York Times: “The plea deal will allow Mr. Weisselberg, who was facing up to 15 years in prison, to spend as little as 100 days behind bars… And it does not require Mr. Weisselberg to cooperate with the Manhattan district attorney’s office in its broader investigation into Mr. Trump, who has not been accused of wrongdoing.”

“But Mr. Weisselberg is expected to admit to all 15 felonies he was charged with and will have to testify about his role in a scheme to avoid paying taxes on lavish corporate perks… That requirement will put the company at a disadvantage and make Mr. Weisselberg a central witness at its trial in October, where it will face many of the same charges.”

Vanity Fair: “Every single criminal investigation and civil lawsuit the ex-president is currently facing, including the ones you’ve probably never heard about.”

After President Biden signed the massive climate, health and tax legislation passed by Congress last week, former President Barack Obama tweeted: “This is a BFD.” And Biden responded: “Thanks, Obama.”

“A day after President Biden signed into law a sweeping climate, health and tax bill that included $80 billion in funding for the Internal Revenue Service, Treasury Secretary Janet L. Yellen directed her agency to develop an operational plan for deploying the funds, kick-starting an overhaul of the beleaguered tax collector,” the New York Times reports.

Rep. Liz Cheney (R-WY) will be launching an organization to educate the American people about the ongoing threat to the country, Playbook reports.

“The new group, which will serve as Cheney’s primary political vehicle as she considers whether to run for president in 2024, does not have an official name yet. An informed guess: The Great Task, which was the name of Cheney’s final ad of the campaign. The phrase is from the last sentence of the Gettysburg Address, and Cheney also referenced it in her concession speech from Jackson, Wyo., last night.”

“The market for a compelling foil to Trump is enormous. With Republicans cowed into silence by him, and Democrats guided by strategists who are ambivalent about nationalizing the midterms around him, Cheney has the Trump-hating — and Trump-addicted — slice of the attention economy all to herself. She clearly intends to use it.”

Charlie Sykes: “Cheney will leave office more influential and admired — and perhaps even powerful — than ever before.”

“This is a hard concept to understand for much of official Washington, for whom clinging to power is the prime directive and electoral defeat is its worst fear.”

“Like Trump, they misunderstood and underestimated the iron lady of Wyoming. But she is also a political rarity with few historical parallels: a mainstream politician willing not only to give up political power, but also to risk excommunication from the only political world she has ever known.”

Ron Brownstein: “In some ways, a Cheney 2024 presidential campaign would be unprecedented: There aren’t any clear examples of a candidate running a true kamikaze campaign.”

“Cheney would have no trouble assembling the building blocks of a traditional presidential campaign. Her name identification is extremely high, for both her familial ties and her prominence as a Trump critic. Her potential fundraising base is strong: Through late July, she had already raised more than $15 million in her House race, and in a presidential run, she could tap into a huge pool of small-dollar donors (many of them Democrats) determined to block Trump. And with her unflinching attacks on the former president, she would be assured bottomless media coverage.”

Jonathan Bernstein: “It’s hard to see how contesting Republican primaries would achieve her goals, however, if Trump does run in 2024. An explicit anti-Trump candidate would appear to have no chance at all to be nominated. If anything, such a campaign would be likely to split the anti-Trump vote and help him win.”

“A third-party anti-Trump candidate in the general election might be more successful. In 2000, Ralph Nader concentrated his third-party campaign on contested states, and in those states he worked to secure the votes of those who would otherwise have backed the Democratic nominee, Al Gore. But even if Cheney was willing to campaign in order to elect a Democrat over Trump, it would still be a tricky proposition, since she might wind up winning votes that otherwise would have gone to the Democratic candidate. A true Nader-like anti-Trump candidate would more likely ignore Trump’s crimes and offenses and campaign purely on extreme conservative policy preferences, hoping to peel away some Republicans who might be tempted at the thought of voting for a True Conservative.”

Aaron Blake: Liz Cheney for president? Why it could actually matter.

“Rudy Giuliani, former President Donald Trump’s onetime personal lawyer, is scheduled to appear before a Georgia grand jury Wednesday, his lawyer said, as part of a growing investigation into efforts by Mr. Trump and his allies to overturn the state’s 2020 election results,” the Washington Post reports.

“A judge in Colorado said on Tuesday that Jenna Ellis, an attorney who represented Donald Trump during and after the 2020 election, must appear before the Fulton County, Georgia, grand jury investigating the former President’s election schemes,” CNN reports.

Joseph Cuffari, the Department of Homeland Security’s Trump-appointed inspector general, is refusing to step down from the investigation into the Secret Service’s deleted Jan. 6 texts, despite House Oversight chair Carolyn Maloney (D-NY) and Homeland Security chair Bennie Thompson’s (D-MS) demands that he do so.

Cuffari told the lawmakers last week in a letter released yesterday that not only would he not recuse himself from the probe, but he also wouldn’t allow his staffers to sit for interviews with the House committees.

The infuriated committee chairs on Tuesday accused Cuffari of trying to “obstruct” their investigation and threatened to “consider alternate means to ensure compliance” if the inspector general didn’t get out of the way.

Said Pence: “The Republican Party is the party of law and order. Our party stands with the men and women who stand on the thin blue line at the federal and state and local level, and these attacks on the FBI must stop. Calls to defund the FBI are just as wrong as calls to defund the police.”

“Former Vice President Mike Pence said Wednesday he would consider testifying before the House Jan. 6 committee if asked, in some of his most direct and extensive remarks on the subject,” USA Today reports.

Said Pence: “If there was an invitation to participate, I would consider it… Any invitation directed at me, I’d have to reflect on the unique role I was serving in as vice president.”

Politico: “Thirty states have or will hold state Supreme Court elections this year, in a combination of traditional elections or a retention vote — an up-or-down vote to decide if a judge should stay on the bench. And some of the biggest state Supreme Court contests this year map alongside traditional battlegrounds, like Michigan and North Carolina, while others creep into redder or bluer territory.”

A Republican-led House panel advanced a near-total abortion ban — with no exceptions for rape or incest — largely along party lines in a 13-7 vote, the Columbia State reports.

The bill also does not include specific language related to fetal anomalies, an exception included in current law.

New York Times: “No other sitting president has ever lived with the shadow of his defeated predecessor in quite the way that Mr. Biden has over the last year and a half. Regardless of what the current president does, he often finds himself struggling to break through the all-consuming circus that keeps Mr. Trump in the public eye. Even the bully pulpit of the White House has proved no match for the Trump reality show.”

“The Texas Tribune and other national and local news organizations on Tuesday asked a federal court to unseal a search warrant used in the January FBI raid of U.S. Rep. Henry Cuellar’s Laredo home and campaign office,” the Texas Tribune reports.

“Former Gov. Andrew Cuomo (D) will not have to turn over the proceeds of his $5.1 million book deal, after a judge ruled on Tuesday that a state ethics board had violated Mr. Cuomo’s due process in seeking the money,” the New York Times reports.

Elon Musk spoke at a Republican retreat hosted by House Minority Leader Kevin McCarthy (R-CA) in Wyoming on Tuesday, The Hill reports.  According to Fox News, McCarthy and Musk led a closed-press “fireside chat” with supporters.

New York Times: “As the virus shuttered businesses and forced people out of work, the federal government sent a flood of relief money into programs aimed at helping the newly unemployed and boosting the economy. That included $3.1 trillion that former President Donald J. Trump approved in 2020, followed by a $1.9 trillion package signed into law in 2021 by President Biden.”

“But those dollars came with few strings and minimal oversight. The result: one of the largest frauds in American history, with billions of dollars stolen by thousands of people, including at least one amateur who boasted of his criminal activity on YouTube.”

A new study finds some two-thirds of the world “could starve to death in the event of a nuclear war between Russia and the United States,” the Washington Post reports.

“Nuclear conflict would lead to “catastrophic” disruptions in food supplies, as sun-blocking soot and ash wilt crops around the world.”

“Even a smaller-scale nuclear war between Pakistan and India would devastate food supplies, slash global production by 7 percent within five years and kill up to 2.5 billion people.”