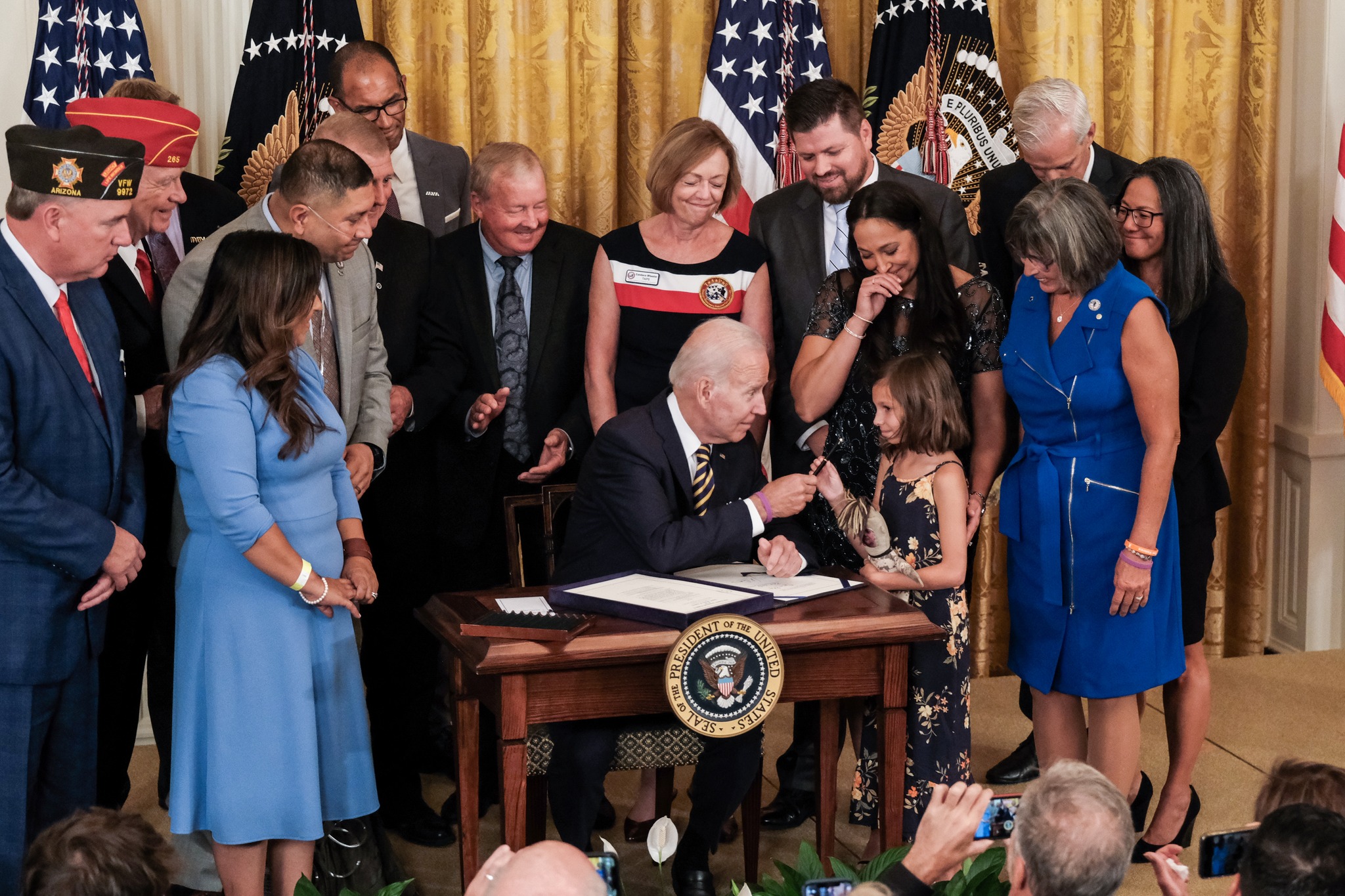 In each poll, with one exception, respondents were quizzed after the initial horserace question what they’d do if they knew the Republican candidate “signed the U.S. Term Limits Pledge and supports term limits” while the Democrat opposes term limits, so the group very much seems to be rooting for the GOP overall. The one divergence is in California’s 22nd District where respondents were told that Democrat Rudy Salas is pro-term limits while Republican Rep. David Valadao opposes them.

WYOMING AT LARGE CD. Rep. Liz Cheney (R-WY) “has spent many hours working on her address for Tuesday night,” The Atlantic reports.

“It will almost certainly be a concession speech, but Cheney seems to view her primary more as a speed bump—and her address as a prime-time launching pad into a political future far more consequential than anything she could have achieved in Congress. Whatever Wyoming Republicans decide will be secondary to Cheney’s pursuit of her real opponent, Donald Trump.”

Said Cheney: “It’s clear that our party is really sick right now. The Trump forces that are trying to pull us into the abyss are really strong and really fighting.”

Matt Lewis: “Go down a list of issues—character, values, free trade, earmarks, Russia, spending, law and order, the rule of law, etc.—and you’d be hard-pressed to find any semblance of a consistent position. Today’s Republican Party  is 180 degrees different from the party that most of its members—like myself—signed up to join.”

“So we are left with a party without a foundation, without a roadmap, and without a soul. It does have a brand though, it’s tacky and gold-plated and it reads ‘TRUMP.’”

“While it may be possible for the GOP to abandon its premises and coast on the borrowed capital of the past, enduring without a raison d’être requires a constant stream of revenge fantasies to rationalize supporting such a shallow cult of personality.”

PENNSYLVANIA U.S. SENATOR. “Pennsylvania Senate candidate John Fetterman (D) is expected to open up about his personal health challenges as he officially returns to the campaign trail Friday, more than 90 days after the Democrat suffered a stroke that threatened his life and political prospects in one of the nation’s premier Senate contests,” the AP reports.

“Fetterman, who was hospitalized for several days after the May health scare, is expected to offer emotional remarks about his experience. He said in June that he almost died.”

Ten House Republicans joined every Democrat in voting to impeach Donald Trump for “incitement of insurrection” related to the January 6, 2021, attack on the Capitol.

Here’s what happened to each of them:

Assuming the polls are correct and Cheney loses next week, Trump will have ended the careers — at least for now — of 80% of the Republican lawmakers who voted to impeach him.

Said Trump: “We are a nation that has weaponized its law enforcement against the opposing political party like never before.”

Donald Trump is fundraising off the FBI search of his home by sending out the “nuclear codes.”

“The pattern is similar with other negative partisan stereotypes: 72% of Republicans and 64% of Democrats say people in the opposing party are more dishonest than other Americans. Fewer than half in each party said this six years ago. Large majorities in both parties also describe those in the other party as more closed-minded than other Americans (83% of Democrats and 69% of Republicans say this), and this sentiment also has increased in recent years.”

“Yet there is one negative trait that Republicans are far more likely than Democrats to link to their political opponents. A 62% majority of Republicans say Democrats are ‘more lazy’ than other Americans, up from 46% in previous studies in 2019 and 2016. Only about a quarter of Democrats (26%) say Republicans are lazier than others, and this has changed only modestly since 2016.”

In fact, Trump’s favorability rating is nearly identical to where it stood immediately after the 2020 election, and nearly 40% of Americans would lean toward backing a comeback bid in 2024.

“House Democrats’ campaign arm is going on the air with a six-figure, abortion-focused ad buy in the special election in New York’s 19th district,” Axios reports.

“The Aug. 23 race is an early test of whether Democrats’ focus on abortion in the wake of the Supreme Court’s decision to overturn Roe v. Wade will be enough to counter Republicans’ attacks on inflation.”

“The 2022 midterms are on track to see the most losses by House members in their primaries in three decades,” Axios reports. “The number of incumbents who have been ousted — or are likely to be toppled in upcoming primary contests — highlights a political realignment that has been underway in both parties for years.”

A new Morning Consult poll finds 58% of Republican voters said they would support Donald Trump if the 2024 Republican presidential primary were today, the highest on record since his 2020 loss.

Trump’s improvement has come to the detriment of Florida Gov. Ron DeSantis, whose 2024 support has slumped 5 percentage points since late July, to 16%.

Similarly, a record-high 71% of GOP voters say that Trump should run for president in 2024.

UTAH U.S. SENATOR. Put Utah First, a group funded by Democratic megadonor Reid Hoffman, has dropped $480,000 on a TV buy to support independent Evan McMullin’s bid against Republican incumbent Mike Lee, though we do not yet have a copy. This appears to be the first major outside spending on either side since well before the late June primary.

“An increase in turnout among Democrats and independents and a notable shift in Republican-leaning counties contributed to the overwhelming support of abortion rights last week in traditionally conservative Kansas,” according to an Associated Press analysis.

“The findings reinforce a sense in both parties that the Supreme Court’s decision may have altered the dynamics of this year’s midterm elections.”

“Vulnerable Democrats believe finally passing a law to let Medicare negotiate the prices it pays for some prescription drugs will give them a much-needed lifeline in what’s otherwise been shaping up as a brutal midterm cycle,” Axios reports.

“A relentless focus on health care helped propel Democrats to seize control of the House in 2018, and they’re hoping that delivering on this decades-long campaign promise will help them keep their congressional majorities now.”

CHICAGO MAYOR. Rep. Chuy Garcia didn’t rule out challenging Mayor Lori Lightfoot in next year’s election, but he doesn’t sound very interested in joining what’s already a crowded race against his fellow Democrat. “I’m not shutting the door completely,” the congressman said Wednesday before adding, “but I’ve gotta tell you, I’ve never been as challenged or rewarded as I have been over the past three and a half years as a member of the United States Congress.” Garcia lost the 2015 mayoral contest to incumbent Rahm Emanuel three years before he was elected to the House.

LOS ANGELES MAYOR. Rep. Karen Bass has earned the backing of Sen. Alex Padilla and fellow Rep. Tony Cárdenas, and the congresswoman is hoping they’ll help her appeal to Latino voters in the November general election. Bass outpaced billionaire developer Rick Caruso citywide 43-36 in June, but the Los Angeles Times says that it was Caruso who scored a 34-27 win in precincts that were at least 80% Latino.