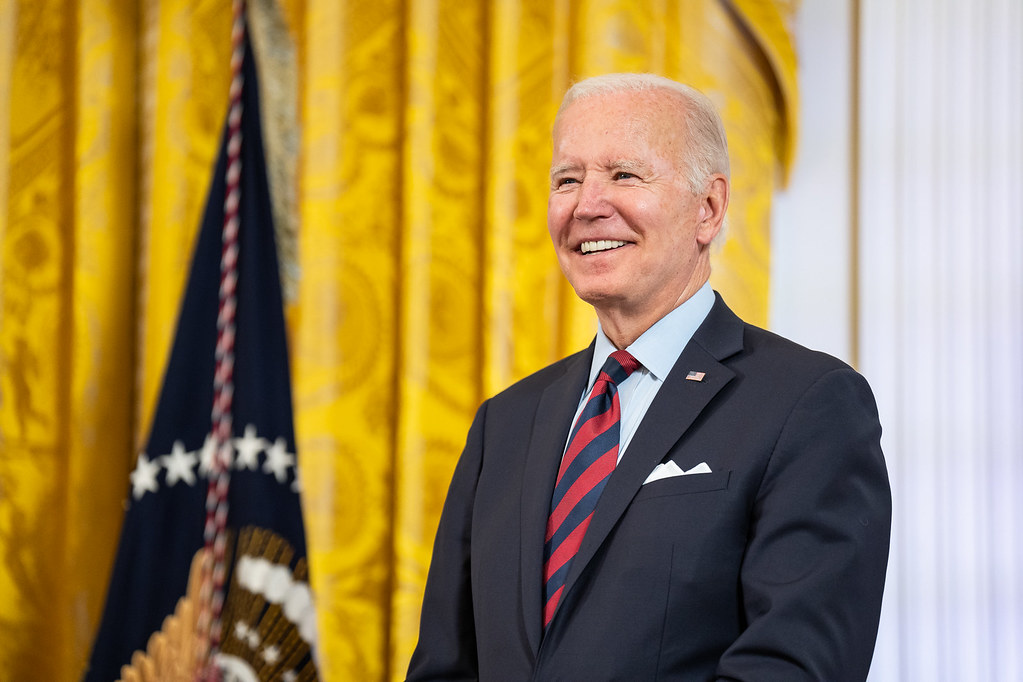 Tuesday’s special election in Minnesota’s first congressional district is another indicator that the long-predicted “red wave” may be much smaller than once forecast.

Republicans ultimately won the race but Jeff Ettinger (D) came within four points of upsetting Brad Finstad (R) in a district that Donald Trump won by 10 points less than two years ago.

That’s nearly identical to the shift seen in the special election in Nebraska’s first congressional district in late June. In that race, Patty Brooks (D) lost to Mike Flood (R) by just six points in a district that went for Trump by 11 points in 2020.

As David Wasserman tweets: “This much is clear from Kansas and the #NE01/#MN01 House specials: there’s still time for things to snap back before November, but we’re no longer living in a political environment as pro-GOP as November 2021.”

While it’s still too early to pinpoint why this is happening, there are plenty of signs that the Democratic base is re-engaged after the Supreme Court took away the guaranteed right for women to have an abortion.

Fortunately, there are three more special House elections this month to test the theory — in Alaska on August 16 and in New York’s 19th and 23rd congressional districts on August 23.

If those races also show weaker-than-expected showings by Republicans, it will suggest the abortion issue is a real motivator for Democrats this fall.

“Republican primaries resumed one day after the FBI search at Mar-a-Lago, which appears to have only cemented Donald Trump’s standing in the GOP ahead of 2024,” Politico reports.

“Republican strategists working for potential rivals to Trump ahead of the next presidential election were already preparing for the likelihood that he could now clear the field; Republicans across four midterm primary states on Tuesday were rushing to his side.”

Republicans wanted the midterm elections to be a referendum on Joe Biden and his presidency. As Donald Trump teased about making an early announcement of a 2024 presidential bid, GOP leaders quietly pleaded with him to wait until after the elections. They feared Trump’s candidacy would take the focus off the economy, inflation and overall dissatisfaction with President Biden.

Well — as so often happens during this strange era — everything has been upended. Here’s what we know:

There are obviously other issues at play in the midterm elections — the economy and abortion being the biggest — but Trump is once again in the middle of it all.

WISCONSIN GOVERNOR. Self-funding businessman Tim Michels, who had Donald Trump’s endorsement, defeated former Lt. Gov. Rebecca Kleefisch 47-42 in the Republican primary to take on Democratic Gov. Tony Evers. Michels was last on the ballot all the way back in 2004 when he lost the Senate race to Democrat Russ Feingold 55-44 as John Kerry was only narrowly carrying Wisconsin 50-49. Team Red, though, is counting on a much better performance from him this time against Evers in what will be one of the biggest races of 2022.

Kleefisch, who was Scott Walker’s running mate in each of his campaigns and had his backing for the top job, looked like the clear frontrunner until April when Michels jumped in seemingly out of nowhere. The construction executive, however, immediately used his wealth to reintroduce himself to voters, and he wound up decisively outspending his opponent after investing at least $12 million into his comeback.

Michels went on to earn Trump’s endorsement in June; the GOP’s leader reportedly was infuriated about a 2019 picture of Kleefisch’s daughter going to her high school prom with the son of Brian Hagedorn, a conservative state Supreme Court justice who sided against Trump’s attempts to steal the 2020 election. Kleefisch and her allies began airing negative ads a month before Election Day, but Michels spent weeks insisting he wouldn’t do the same.

As recently as last Monday, the businessman proclaimed, “I’ve never had a negative ad run by my campaign in this race,” explaining, “And the reason is we’ve never had a single piece of business by talking bad about the competition.” However, while Michels continued, “And the reason is, it’s just bad policy, and if you get a reputation of doing that in my industry … people immediately disrespect you,” he decided to risk that disrespect on Thursday by indeed going negative. That belated response, as well as the Club for Growth’s earlier anti-Kleefisch ad campaign, may have made the difference in Tuesday’s close primary.

Klarides spent years as a GOP rising star in a state where the party desperately needed one, and she had been widely expected to challenge Democratic Gov. Ned Lamont. In January, though, Klarides kicked off a Senate bid instead after wealthy businessman Bob Stefanowski announced that he would seek a rematch with Lamont, who beat him 49-46. However, while Klarides likely believed she’d avoid a tough primary by choosing to go after the entrenched Blumenthal, Levy proved her very wrong.

MINNESOTA 1ST CD SPECIAL ELECTION. The Associated Press has not yet called the special election to succeed the late Republican Rep. Jim Hagedorn, but Republican Brad Finstad leads Democrat Jeff Ettinger 51-47 with 118,000 votes in; the AP estimates that this is represents 99% of the total vote. Trump carried this southern Minnesota constituency 54-44 in 2020, while Hagedorn won his second and final term that year 49-46.

MINNESOTA 1ST CD. Finstad easily turned back state Rep. Jeremy Munson 76-24 in the Republican primary for a full two-year term, while Ettinger secured the Democratic nod 92-6 against a little-known foe. Trump would have carried the new version of the 1st, which largely resembles the constituency Hagedorn represented, by a similar 53-44 spread.

Finstad beat Munson just 38-37 in the May special primary, and while Munson filed to run for a full term days later, it initially looked like he was just raising money to pay back a $200,000 campaign loan. Munson announced in July that he would indeed try once more to beat Finstad, but that effort badly collapsed on Tuesday.

MINNESOTA 5TH CD. In arguably the biggest surprise of the evening, Rep. Ilhan Omar fended off former Minneapolis City Council member Don Samuels just 50-48 to win renomination in this heavily Democratic constituency in the Minneapolis area. We’ll take a closer look at this near upset in our next Digest.

VERMONT U.S. SENATOR. First-time candidate Gerald Malloy scored a 43-39 win against former U.S. Attorney Christina Nolan, who generated some attention when she launched her campaign; Nolan also had the support of Gov. Phil Scott, who is one of the few prominent Republicans in this very blue state. The result makes little difference for the general election, though, because Democratic Rep. Peter Welch should have no trouble winning the contest to succeed retiring Sen. Pat Leahy in a state Biden took 66-31.

VERMONT AT LARGE CD. State Senate President Pro Tem Becca Balint beat Lt. Gov. Molly Gray 61-37 in the primary to replace Welch as Vermont’s only House member. Balint, who had endorsements from Sen. Bernie Sanders and the LGBTQ Victory Fund, is now set to end Vermont’s status as the only state in America that has not elected a woman to Congress; Balint would also be the Green Mountain State’s first gay representative.

Both Moriarty and Dimick are Democrats, but they’ve been running very different campaigns. Moriarty, who has the backing of Rep. Ilhan Omar, Attorney General Keith Ellison, and the state Democratic–Farmer–Labor Party, has pitched herself as a reformer, saying there needs to be “accountability both for people who violate the law and police.”

Dimick, who has both Minneapolis Mayor Jacob Frey and the Minnesota Police and Peace Officers Association in her corner, has in turn argued, “We have to send messages that we will prosecute violent criminals … With that effort to defund the police, people sent the wrong message.” Dimick would be the state’s first Black county attorney.

WISCONSIN 3RD CD. State Sen. Brad Pfaff defeated businesswoman Rebecca Cooke 39-31 in the primary to succeed retiring Rep. Ron Kind, who is Pfaff’s former boss and top supporter. Pfaff will now go up against 2020 Republican nominee Derrick Van Orden, who lost to Kind 51-49 in the closest race of the congressman’s career. Trump carried both the old and new versions of this southwestern Wisconsin constituency 51-47.

WISCONSIN ATTORNEY GENERAL. Fond du Lac County District Attorney Eric Toney holds a 37.5-36.9 edge over former state Rep. Adam Jarchow in a contest that the Associated Press has not yet called; 595,000 ballots have been tabulated, and the AP estimates they represent 99% of the total vote. The winner will go up against Democratic Attorney General Josh Kaul, who won his post in a tight 2018 contest.

WISCONSIN STATE ASSEMBLY. Republican Speaker Robin Vos won renomination 51-49 against Adam Steen, who was very much a longshot until Trump endorsed him last week. No Democrats are running for this seat in the Racine area.

Trump made his move after Vos said that the GOP’s master had recently called him and urged him to retroactively decertify Joe Biden’s victory in the state—a move the speaker said was legally impossible. Trump retaliated by trashing Vos for using an old photo of the two of them together in his campaign literature as he endorsed the previously little-known Steen.

MICHIGAN ATTORNEY GENERAL. Michigan attorney general candidate Matt DePerno (R) “boasted about having access to a voting tabulator and declined to reveal how his legal team obtained the machine,” the Detroit News reports.

“On Friday, after a months-long investigation into voting machine access, Attorney General Dana Nessel’s office asked for the appointment of a special prosecutor to consider potential charges against nine individuals, including DePerno.”

These are the first numbers we’ve seen from any of these contests.

OHIO U.S. SENATOR. Democrat Tim Ryan has unveiled a late July poll from Impact Research that shows him outpacing Republican J.D. Vance 48-45, which is almost identical to his 48-46 edge one month before.

During the intervening time a pro-Ryan group and the conservative John Bolton super PAC each dropped their own surveys finding Ryan up 46-41 and 44-38, respectively, while Vance’s side hasn’t responded with better numbers. Vance himself told Fox Friday, “I think the polls frankly are a big joke especially this far out.” National Republicans aren’t laughing, though, as they recently spent millions on TV ads in a contest where they likely never planned to spend anything at all.

CONNECTICUT GOVERNOR. While both Democratic Gov. Ned Lamont and Republican Bob Stefanowski have access to huge amounts of money ahead of their rematch, The Connecticut Mirror reports that both the DGA and RGA have been airing commercials here. The DGA-backed Stronger CT has spent $1.4 million since mid-July, while its counterparts at Advancing Connecticut reported a $920,000 buy against Lamont on Friday; another conservative group called CT Truth PAC has also spent $1.6 million to date. Lamont defeated Stefanowski 49-46 in 2018, and both men have once again self-funded the vast majority of their campaigns.