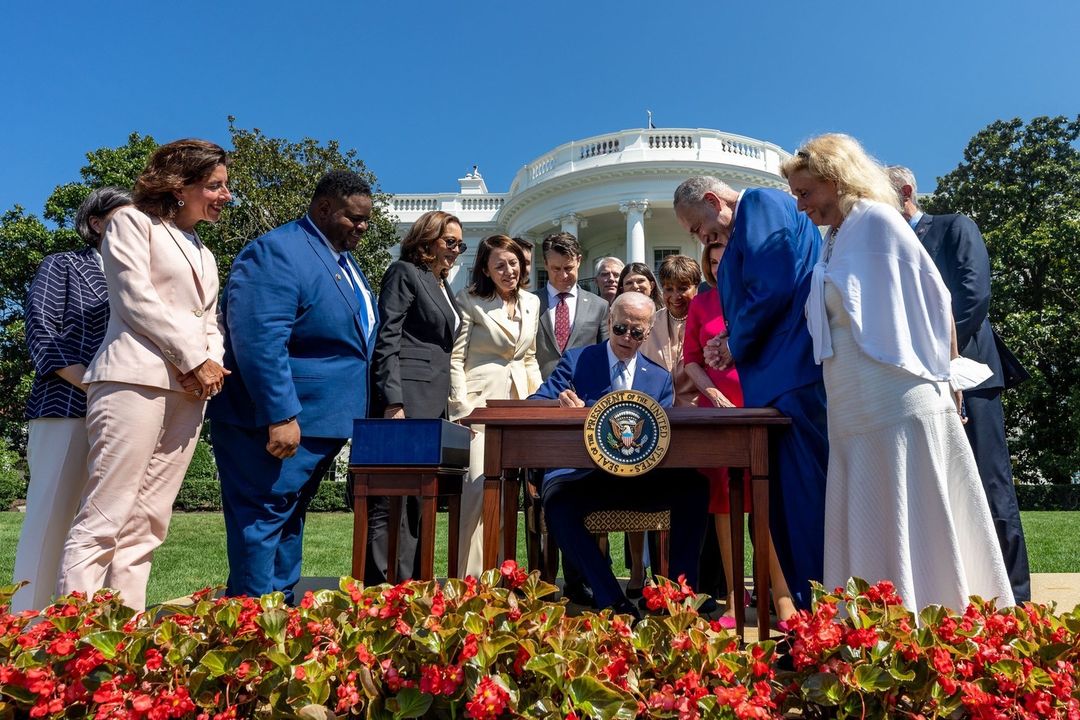 “The raid on Mar-a-Lago was based largely on information from an FBI confidential human source, one who was able to identify what classified documents former President Trump was still hiding and even the location of those documents,” Newsweek reports.

“Trumpworld is abuzz with speculation about which close aide or aides has ‘flipped’ and provided additional sensitive information to the FBI about what former President Trump was keeping at Mar-a-Lago,” Axios reports.  “Trump’s orbit is always an environment rife with mistrust and paranoia. Now, that’s intensified.”

“The FBI’s search of former President Donald Trump’s home on Monday to obtain information related to his handling of classified information is separate from the Justice Department’s investigation into the Capitol attack on Jan. 6, 2021,” the New York Times reports.

“However, the information gathered by investigators at Mar-a-Lago could be used in other cases if it proves relevant.”

“The former chief of the Justice Department’s national security division said Tuesday that the search of Donald Trump’s Mar-a-Lago home in Palm Beach, Fla., suggests that the former president could be charged with violating the World War I-era Espionage Act,” Yahoo News reports.

That law has traditionally been used to target government leakers, such as former NSA contractor Edward Snowden. But Mary McCord said it also “actually has provisions that apply to essentially the mishandling of classified material through gross negligence, permitting documents to be removed from their proper place, or to be lost, stolen or destroyed.”

“It’s been two days since the FBI searched Trump’s Florida home, spurring loud calls for transparency at Justice. But Trump’s lawyers have the warrant and a detailed manifest of what the FBI took away. Why haven’t they been released?,” Playbook asks.

Politico: “The president has decried the FBI’s search of his home. But legal experts say the agency is likely on firm ground. They note Trump could clear a lot of the mystery up himself.”

Wall Street Journal: “The warrant refers to the Presidential Records Act and possible violation of law over handling of classified information, according to Christina Bobb, a lawyer for the former president. The warrant hasn’t been made public.”

“For the department to pursue a search warrant at Mar-a-Lago tells me that the quantum and quality of the evidence they were reciting — in a search warrant and affidavit that an FBI agent swore to — was likely so pulverizing in its force as to eviscerate any notion that the search warrant and this investigation is politically motivated.”  — David Laufman, former head of the Justice Department’s counterintelligence section, quoted by Politico.

The New York Times reports the Trump Organization was subpoenaed for a copy of Mar-a-Lago’s surveillance tapes.

The company complied, turning over the tapes to the government, but it’s not clear if the information handed over was accurate.

“I just hope DOJ fully appreciates all that it’s biting off here. Whether they want it to be or not, it’s going to become extraordinarily political. It would be in their interest to communicate very clearly what has happened and why. Regardless, the right is going to lose its mind, and Trump will again play the victim card to great effect.” — GOP operative Brendan Buck, quoted by the Washington Post.

To hear Alina Habba, one of Trump’s defense lawyers, explain it: The FBI probably planted incriminating evidence when agents raided the ex-president’s Mar-a-Lago resort on Monday, but also the raid was a wild goose chase and Trump doesn’t have anything incriminating at Mar-a-Lago.

“Quite honestly, I’m concerned that they may have planted something,” Habba told Fox News on Tuesday night. “At this point, who knows?”

Christina Bobb, another Trump defense lawyer and former OAN host (RIP), on the other hand, doesn’t “necessarily think that they would even go to the extent of” planting anything because “they just make stuff up and come up with whatever they want,” even though “[t]here’s just nothing there.”

Sen. Rand Paul (R-KY) suggested on Fox & Friends that the FBI may have planted evidence in boxes they seized from Donald Trump at Mar-a-Lago.

David Leonhardt: “Perhaps the central question about the F.B.I.’s search of Donald Trump’s Florida home is whether it is a relatively narrow attempt to recover classified documents — or much more than that.”

“Either scenario is plausible at this point. The Justice Department has long been aggressive about investigating former officials whom it suspects of improperly handling classified material, including Hillary Clinton and David Petraeus. If the F.B.I. search merely leads to a legalistic debate about what’s classified, it probably will not damage Trump’s political future.”

“But it also seems possible that the search is a sign of a major new legal problem for him. People familiar with the search told The Times that it was not related to the Justice Department’s investigation into the Jan. 6 attack and Trump’s role in it. And it’s unlikely that Merrick Garland, the attorney general, would have allowed the search-warrant request — or that a federal judge would have approved it, as was required — unless it involved something important.”

“Consumer prices were unchanged in July, as plunging prices for gasoline dragged the Consumer Price Index down to zero,” Axios reports. “Core inflation, which excludes energy and food, rose only 0.3%, below what analysts expected.”

“The Biden administration on Tuesday got some much-needed good news on inflation: Online consumer prices dropped in July — the first time in more than two years that’s happened,” Politico reports.

“It’s another early sign that the white-hot inflation that has plagued the economy for more than a year could be abating as the Federal Reserve aggressively raises interest rates. Gas prices have dropped for eight straight weeks. Key commodities costs have eased. Walmart and other giant retailers are slashing prices. And even consumers are telling the Fed that their long-term fears of inflation are subsiding.”

Pennsylvania’s GOP gubernatorial nominee and Big Lie devotee Doug Mastriano spent less than 15 minutes talking to the House Jan. 6 Committee during his scheduled virtual hearing on Tuesday before cutting off the session, his lawyer confirmed.

Mastriano and his lawyer had insisted that they be allowed to record the session, something the panel obviously didn’t agree to.

Former Secretary of State Mike Pompeo testified in front of the House Jan. 6 Committee on Tuesday, per CNN, ABC News and the New York Times.

The reported focus of Pompeo’s interview: The ex-Trump official’s alleged discussion with then-Treasury Secretary Steven Mnuchin about potentially invoking the 25th Amendment to oust Trump after the Capitol attack.

Rep. Scott Perry (R-PA) told Fox News that the FBI confiscated his cell phone.  Perry said that while traveling with his family earlier in the day, he was approached by three FBI agents who handed him a warrant and requested that he turn over his cell phone.

“If you’re innocent, why are you taking the Fifth Amendment?”— Donald Trump, quoted by the Washington Post in 2017.

“Donald Trump declined to answer questions from the New York state attorney general’s office on Wednesday, a stunning gamble in a high-stakes legal interview that is likely to determine the course of a civil investigation into his company’s business practices,” the New York Times reports.

In a statement released shortly after the questioning began on Wednesday, Trump said he would invoke his Fifth Amendment right against self-incrimination, explaining that he “declined to answer the questions under the rights and privileges afforded to every citizen under the United States Constitution.” While Trump was probably legally right to plead the Fifth, that decision nonetheless has political consequences.

Trump, clearly still reeling from the FBI raid on Mar-A-Lago, whined in his announcement that he was being “attacked from all sides.” Trump’s eldest kids, Ivanka and Don Jr., have already given their testimonies in James’ probe recently.

This video montage from the Daily Show is priceless.

“Iran has begun training Russian officials to use its advanced drones, according to the Biden administration, the latest sign that Moscow plans to use Tehran’s military weapons to try to seize a new aerial advantage in Ukraine,” the Wall Street Journal reports.

“Iranian officials launched the training in recent weeks as part of an agreement for Tehran to send hundreds of drones to Russia, according to a U.S. official, who cited recently declassified U.S. intelligence.”

“A Florida prosecutor vowed Sunday to fight his suspension from office by Gov. Ron DeSantis over his promise not to enforce the state’s 15-week abortion ban and support for gender transition treatments for minors,” the AP reports.

“Iraq ranks fifth on the list of countries most vulnerable to the impacts of climate change, and it is heating faster than much of the globe.”

“A commercial real estate firm held in contempt of court for failing to hand over records on its appraisals of several Trump Organization properties to New York’s attorney general has turned over nearly 36,000 documents,” NBC News reports.

Edward Luce: “Fourteen years ago, I told a well-informed friend that Barack Obama was considering picking Joe Biden as his running mate in the 2008 election. ‘You’ve got to be kidding,’ came the riposte. ‘Biden is way past it.’”

“Similar obituaries were being penned only two weeks ago as Biden’s poll numbers dropped below even Donald Trump’s nadir. Yet here we are. America’s oldest president can now boast of a stronger legislative record in less than two years than either Obama or Bill Clinton achieved in eight. It turns out that low expectations are Biden’s secret weapon.”

“As House Republicans rush to argue that the FBI search of Donald Trump’s home is marred by politics, they are readying a future Hunter Biden investigation designed to ensnare Joe Biden ahead of a potential reelection bid,” Politico reports.

“House Republicans see no contradiction between their suspicion of the FBI’s law enforcement activity at Mar-a-Lago and their interest in digging into the business dealings of the president’s son and other family members. Oversight of the Bidens, they contend, would counterbalance what they see as a Justice Department where partisanship influences decisions like the probe of 2020 election subversion that’s drawing closer to Trump.”

Washington Post: “For much of his presidency, Biden has had a hard time competing for attention with the predecessor he calls ‘The Former Guy,’ the one who left office a year-and-a-half ago but never really left the public consciousness. The news is often not particularly positive for Trump — revelations about his presidency, congressional testimony and hearings, legal rulings and complications — but it can nonetheless eclipse Biden’s ability to deliver his message and command public attention.”

Dana Milbank: “I would like nothing more than to be wrong about this. But the reckless response by the GOP-Fox News axis to the FBI’s search of Mar-a-Lago makes it feel as though we’re falling into the abyss.”

William Saletan: “Two years ago, in congressional and state elections, Republican candidates accused Democrats of supporting proposals to ‘defund’ or ‘abolish’ police. Actually, although anti-police slogans were widespread on social media and among protesters, very few Democratic officeholders supported these ideas. But Republicans didn’t let those facts get in the way. They smeared the whole Democratic party as an agent of crime and chaos.”

“Monday’s FBI search of Mar-a-Lago—reportedly in pursuit of classified documents that former President Donald Trump may have illegally kept when he left office—has turned this issue upside down. Now that law enforcement has targeted Trump, conservatives are denouncing the FBI. Some want to defund the bureau; others are demanding its complete abolition.”