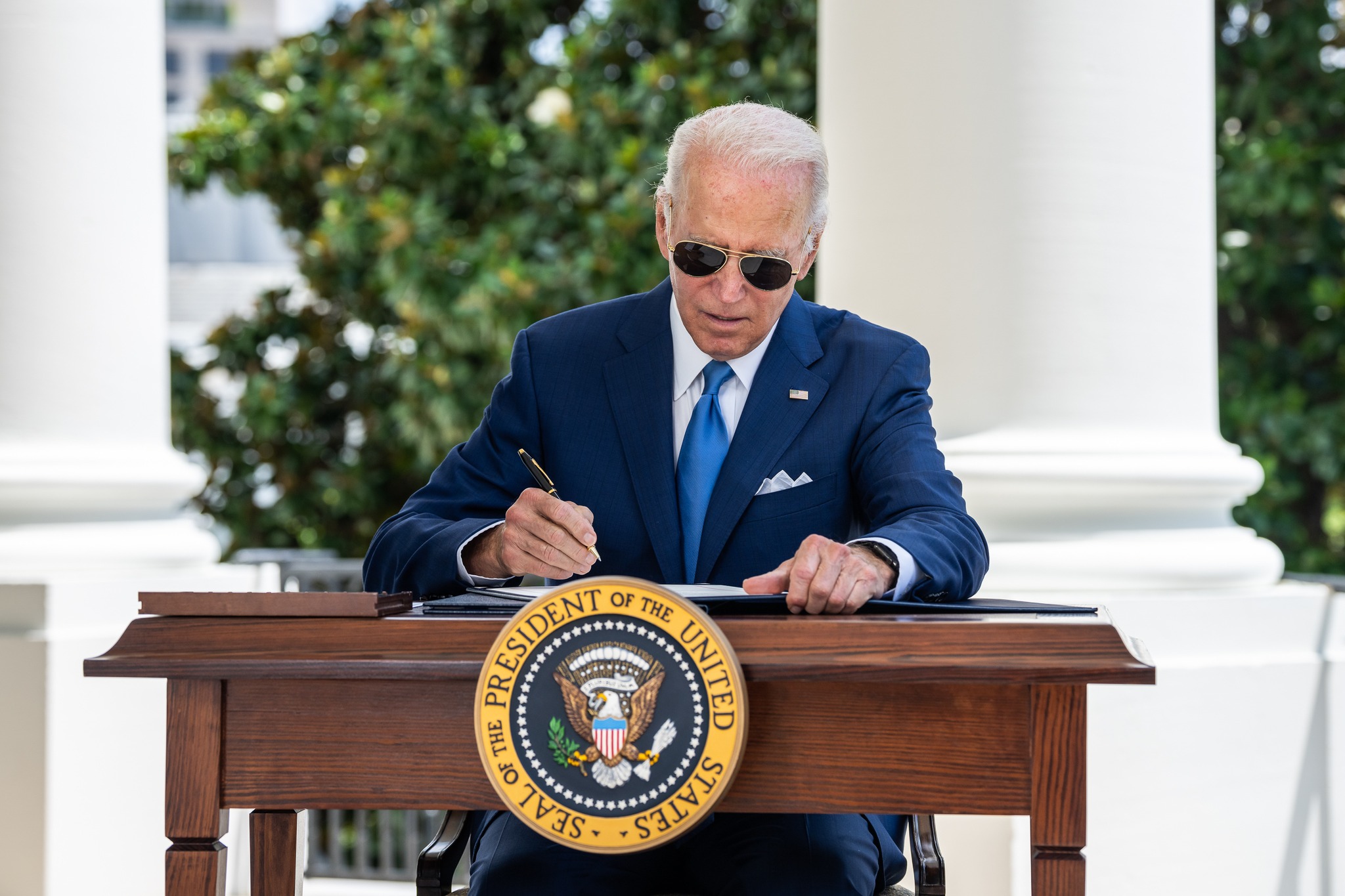 A new ABC News/Ipsos poll finds 69% of Americans think the nation’s economy is getting worse — the highest that measure has reached since 2008.  “Americans’ views of Biden’s handling of the economic recovery remain overwhelmingly negative — and are virtually unchanged from the same poll in early June, with only 37% of Americans approving of the job the president is doing and 62% disapproving.”

“The low confidence in Biden’s handling of the economy and inflation comes on the heels of Friday’s jobs report, which showed that 528,000 jobs were added in July… Americans also saw the unemployment rate go down to 3.5%.”

Bloomberg: “The bumper-sticker version of what we found: The 2022 vote should be fine. The most far-reaching attempts by Republicans to overhaul election laws have so far stalled as Americans head into November’s midterm elections to decide governors in 36 states and control of the US Congress. So even though it’s a safe bet that at least a handful of candidates will follow Trump’s lead and claim their opponent cheated if they lose, it won’t be any easier than it was two years ago for them to overturn the results.”

“But the picture two years from now is shaping up to be much darker.”

“Trump and his loyalists are supporting people who deny the results of the 2020 election for governor in five key states this fall, more than enough to tilt a close 2024 presidential race away from the duly elected winner. Tight races this November in Arizona, Michigan, Nevada and Wisconsin, and a possible Republican win in Pennsylvania, will determine who is in charge of making election decisions in states where the White House is won or lost. In all five of these states, Trump and his backers tried to overturn the results.”

Jonathan Bernstein: “It has been clear for some time that Republicans might ruin their own chances by picking terrible candidates. But recent primaries in Arizona, Pennsylvania, Colorado, Nevada, Ohio and other states show how willing GOP voters are to select extremely risky candidates.”

“Candidates with electoral experience tend to perform better than those without it. (Nate Silver examines just how inexperienced the candidates Republicans have chosen recently are.)”

“But political inexperience isn’t the Republican candidates’ only problem. Two of Trump’s big primary success stories, former football star Herschel Walker in Georgia and TV doctor Memhet Oz in Pennsylvania, are celebrities. That can be useful! But both have been duds, or worse, on the campaign trail…”

“In other states, it’s less about candidates’ competence and more about extreme policy positions. Blake Masters in Arizona and J.D. Vance in Ohio are Senate nominees backed by billionaire Peter Thiel, who presumably supported them because of libertarian positions that translate poorly to the campaign trail.”

WASHINGTON 3RD CD. Rep. Jaime Herrera Beutler (R-WA), who voted to impeach Donald Trump after the January 6 insurrection, has lost the Republican primary to Joe Kent (R), according to the Cook Political Report.

“The ad, which initially aired solely in Wyoming, got so much attention that Cheney’s campaign has decided to take it directly to Trump’s favorite programs. The ad will air twice daily this week during ‘Fox & Friends’ and once daily on Sean Hannity’s prime-time show.”

“Two House Democrats — from New Jersey and Minnesota — are appealing to members of their own party in Wyoming to ‘consider’ changing their affiliations ahead of the state’s contentious Republican primary on Aug. 16 in order to back incumbent Rep. Liz Cheney,” ABC News reports.

ARIZONA GOVERNOR. “The Republican Governors Association is going to put at least $11 million into commercials to ensure that Arizona Gov. Doug Ducey’s successor is of the same political party,” the Arizona Daily Star reports.

“But don’t look for that money to be spent extolling the virtues of Kari Lake, the GOP nominee for governor. Instead, given the organization’s record, the commercials are more likely to be unapologetic, no-holds-barred attacks on Democratic gubernatorial nominee Katie Hobbs.”

“Ron DeSantis is taking his growing clout among national Republicans on the road, where he’ll be the main attraction at events for Senate and gubernatorial candidates in key races across the country,” Politico reports.  “Each of the candidates DeSantis is campaigning for has been endorsed by former President Donald Trump.”

The Milwaukee Journal Sentinel has the backstory of how the Republican National Committee chose Milwaukee as the site for the 2024 GOP convention.

ALASKA AT LARGE CD. If you’re looking for a quick dose of late aughts nostalgia you’re in luck, because businessman Nick Begich III has launched a spot that attacks fellow Republican Sarah Palin’s record as governor and takes her to task for abruptly resigning back in 2009. This ad, which appears to be the first negative commercial ahead of next Tuesday’s instant-runoff special election, opens with a small business owner named Athena Fulton telling the audience, “I get it. Sarah Palin is famous. But come on, U.S. Congress?”

Fulton continues, “As governor, Palin drove oil investment out of Alaska. Created our bloated state budget, quit and left Alaska to be a celebrity who didn’t want to be stuck in Wasilla.” That last bit is accompanied by photos of Palin’s 2020 appearance on The Masked Singer where the one-time vice-presidential nominee performed “Baby Got Back” disguised as a pink and blue bear.

Fulton goes on to talk up Begich as someone who “shows up” unlike Palin, who she says is in New York City. (Pace Picante voice: “New York City?!?!?!“) The ad, which does not feature Begich clad in any multi-colored Ursidae costumes, concludes with Fulton declaring, “I’m voting for smart, not Sarah.” The third candidate, former Democratic state Rep. Mary Peltola, goes unmentioned.

Begich’s offensive came around the same time that the Anchorage Daily News’ Iris Samuels reported just how Palin has been “notably difficult to track down” during her comeback campaign. The former governor, the story says, has made only a few public appearances in the state and has ducked several candidate events, including an Anchorage Republican Women’s forum earlier in the year: The organizers responded by setting aside an empty chair with her name attached and including the word “no.”

Palin has been visible in the final days of the campaign … just not in Alaska. While she did appear at one candidate event last week, she skipped Wednesday’s debate to instead hold a Minneapolis fundraiser with far-right pillow salesman Mike Lindell. Palin then appeared the following day at CPAC’s Dallas confab, where she bashed the state’s new voter-approved ranked choice law as “elements of a perfect bad storm.”

NEW YORK 3RD CD. The crypto-aligned Protect Our Future PAC has deployed nearly $500,000 on TV and digital ads for Nassau County Legislator Josh Lafazan, which makes this the first major outside buy ahead of the Aug. 23 Democratic primary.

Bethesda Magazine writes that county election officials say they’re “aiming” to certify the results by Friday, and that Blair would have three days afterwards to formally ask for a recount; Blair got a partial recount four years ago, but it netted him just two votes. The Democratic nominee will once again be the favorite in the November general election in this very blue county in the D.C. suburbs.

MICHIGAN ATTORNEY GENERAL. Democratic Attorney General Dana Nessel’s office on Friday asked the Michigan Prosecuting Attorneys Coordinating Council to appoint a special prosecutor to investigate allegations that Republican rival Matt DePerno was part of a scheme to illegally acquire and tamper with voting machines early last year. DePerno, the attorney general’s team assets, “gained unauthorized access and compromised tabulators” and used the information in his failed lawsuit challenging Trump’s defeat. Under state law, it is a five-year felony to “obtain undue possession of a voting machine used in an election.”

The petition says that Democratic Secretary of State Jocelyn Benson asked the attorney general’s office and Michigan State Police to “investigate third party access to vote tabulator” back in February, but that DePerno’s name wasn’t connected to the probe at the time. However, it adds that Nessel’s office needs to step aside in order to avoid a conflict of interest now that her opponent is involved. DePerno’s campaign responded by saying he “categorically denies” the allegations and calling them a “liberal fever dream of lies.”

It may be some time before this matter proceeds. Bridge Michigan’s Jonathan Oosting tweets, “Selecting a special prosecutor in vote machine tampering case could take weeks, if not months, according to prosecuting attorneys association.” He added, “It’s possible voters will have to cast ballots not knowing if DePerno will be charged.”

GEORGIA GOVERNOR. Democrat Stacey Abrams’ leadership committee is airing a commercial faulting GOP Gov. Brian Kemp for the recent cancellation of Atlanta’s Music Midtown festival, a development that reportedly came about because organizers were worried that state laws would prevent them from banning weapons. The spot consists of footage of TV reports about the news: One anchor declares, “Gov. Kemp signed a bill eliminating the state’s gun permit requirement,” while another reporter explains, “A major blow to the city’s economy … the festival brings in around $50 million.”

The ad then shows a clip of Kemp being asked, “Any regrets about Music Midtown leaving in response to a gun law,” to which the governor replies, “You would have to talk to them.” It closes out with a journalist warning that this could put more events “in jeopardy.”