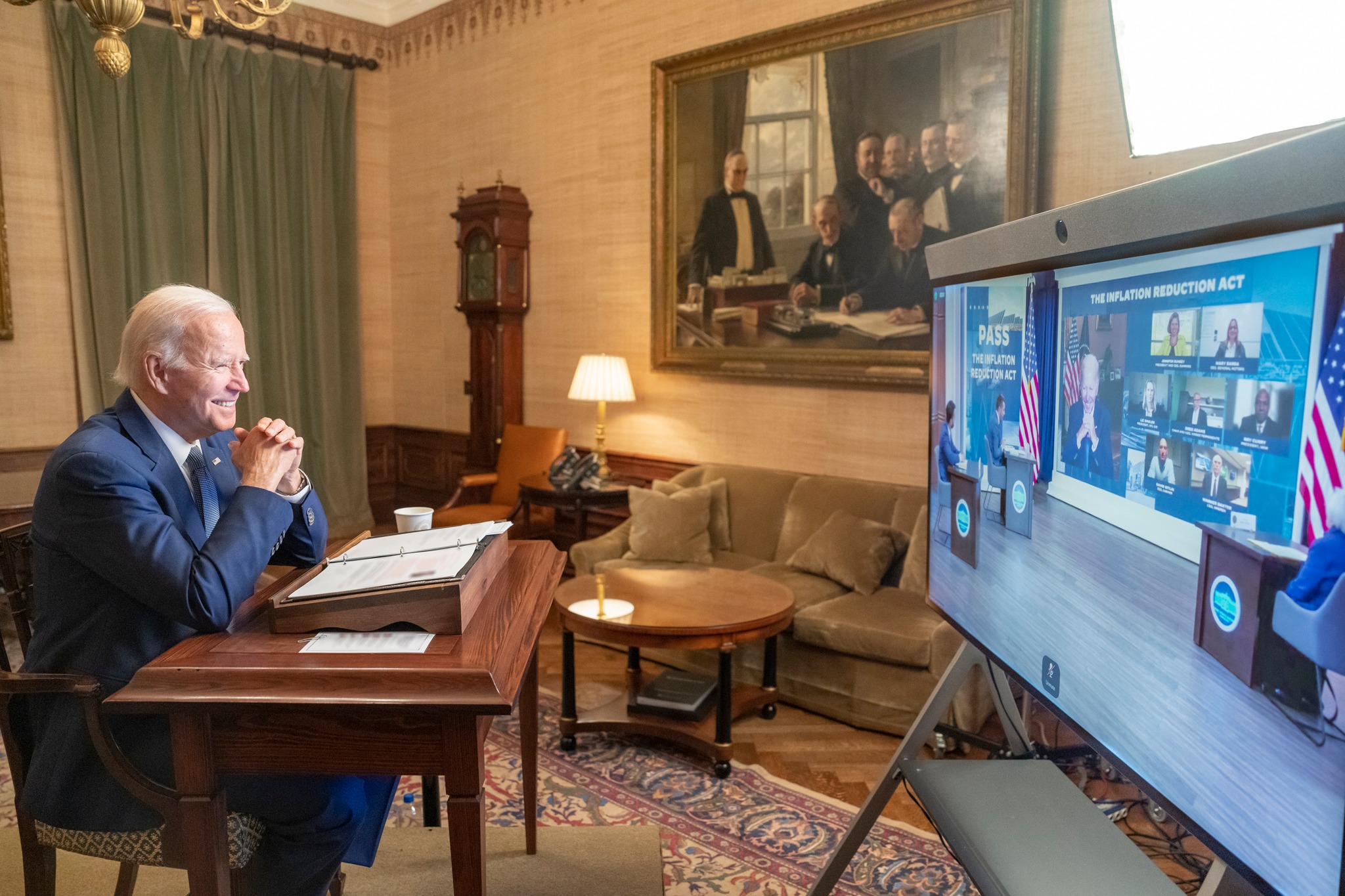 A new ABC News/Ipsos poll found that voters would choose a candidate who favors keeping abortion legal over one who favors limiting abortion except to protect the mother’s life by 49% to 27% with another 22% saying it wouldn’t matter.

Rep. Nancy Mace (R-SC) warned that Republicans could pay a price in November if they don’t reel in extreme takes on abortion policy, Politico reports.  Said Mace: “I am staunchly pro-life. I have a 100 percent pro-life voting record. I do think that it will be an issue in November if we’re not moderating ourselves, that we are including exceptions for women who’ve been raped, for girls who are victims of incest and, certainly, in every instance where the life of the mother is at stake.”  She added: “Somewhere in the middle is where we’ve got to meet.”

Fried’s allied PAC, meanwhile, is running the first negative commercial of the race, and it goes after Crist for appointing an “anti-choice extremist” to the state Supreme Court when he was Florida’s Republican governor. The spot also features footage from this year of Crist saying, “I’m still pro-life,” though it doesn’t include him continuing, “meaning I’m for life. I hope most people are.” (Crist used that same interview to express his regret over his anti-abortion judicial picks.) Politico says the spot is airing in the Orlando market, which covers about 20% of the state.

Fried also recently aired a spot faulting Rep. Charlie Crist for appointing an “anti-choice extremist” to the state Supreme Court when he was Florida’s Republican governor, and Crist has launched a response ad ahead of their Aug. 23 Democratic primary. “The truth: I vetoed anti-abortion legislation to protect your right to choose,” the congressman tells the audience, adding, “Nikki knows I fought for your right to choose.”

In a separate commercial, Crist’s narrator declares that Fried was “close pals with accused sex trafficker [Rep.] Matt Gaetz.” Politico writes that Fried became friends with Gaetz when he was in the state House and she lobbied for the state’s medical marijuana industry, but she says the two are no longer in contact.

RHODE ISLAND GOVERNOR. Gov. Dan McKee has secured an endorsement from RI Council 94, which is Rhode Island’s largest state employee union, for the Sept. 13 Democratic primary. Secretary of State Nellie Gorbea, meanwhile, has earned the backing of the Rhode Island Federation of Teachers and Health Professionals, which is one of the state’s two teachers unions: The other, the NEA, is for McKee.

ARIZONA U.S. SENATOR. Republican Blake Masters’ allies at Saving Arizona PAC have dusted off a mid-July internal from Fabrizio, Lee & Associates that shows him trailing Democratic Sen. Mark Kelly 49-44, which is identical to what OnMessage Inc. found in a more recent survey for another conservative group. Both firms are releasing these unfavorable numbers to argue that the political climate will be a big asset to Masters.

OHIO U.S. SENATOR. “Tim Ryan may be running ahead of J.D. Vance in Ohio. But the cavalry is coming to Vance’s rescue,” Politico reports.  “Whether Ryan can survive the coming ad onslaught and keep Ohio’s Senate race surprisingly competitive is an open question. The Democratic congressman is making an appeal to Republicans and independents in hopes he can win in a state that has shifted right in recent years, falling off the center of the battleground map it occupied for so many decades.”

“Independent polling in the race has been scarce so far. But Ryan has staked out a narrow 3-point edge in an internal poll for his campaign obtained exclusively by Politico, taking 48 percent support to Vance’s 45 percent, with 7 percent undecided.”

CONNECTICUT U.S. SENATOR. Donald Trump on Thursday evening endorsed his former ambassador to Chile, Leora Levy, days ahead of the GOP primary to take on Democratic incumbent Richard Blumenthal. Trump initially made his proclamation by calling Levy’s phone while she was attending a party gathering along with her two intra-party rivals, former state House Minority Leader Themis Klarides and Peter Lumaj. (Levy broadcast his voice through the P.A.) He later put out a statement calling Klarides, who has long been a GOP rising star, “Weak on Crime, Weak on our Military and Vets, and will not be protecting our under siege Second Amendment.”

PENNSYLVANIA U.S. SENATOR. Democrat John Fetterman has announced that he will hold a rally in Erie on Aug. 12, which will be his first since his May stroke.

MICHIGAN GOVERNOR. NBC reports that the anti-abortion group Right to Life Michigan has reserved $7.8 million in ad time to defeat Democratic Gov. Gretchen Whitmer. Voters in November will also likely decide on a constitutional amendment that would guarantee the right to an abortion.

KENTUCKY GOVENROR. Secretary of State Michael Adams announced Friday that he would run for re-election next year rather than seek the Republican nomination for governor or attorney general.

MISSISSIPPI GOVERNOR. State House Speaker Philip Gunn has publicly acknowledged that he’s considering waging a 2023 primary bid against Republican Gov. Tate Reeves, saying he is in “constant evaluation” about what to do. Magnolia State politicos have been talking about a potential Gunn campaign for over a year, but Mississippi Today writes, “In recent weeks, though, those rumors have cooled off.”

WISCONSIN GOVERNOR. New York Times: “Ms. Kleefisch’s predicament illustrates how Mr. Trump’s supporters have turned fury over his 2020 election loss and the misguided belief that its results can be nullified into central campaign issues in the Republican primary for governor in Wisconsin, a battleground state won by razor-thin margins in the last two presidential elections. G.O.P. candidates have been left choosing whether to tell voters they are wrong or to engage in the fiction that something can be done to reverse Mr. Trump’s defeat.”

“Dozens of Republican voters and activists interviewed across the state in the last week said they wanted to see lawmakers decertify the state’s election results and claw back its 10 electoral votes, something that cannot legally be done. Nearly all of them pointed to a July decision from the conservative-leaning Wisconsin Supreme Court, which ruled that drop boxes used to collect ballots during the pandemic were illegal under state law, as evidence that hundreds of thousands of 2020 votes should be thrown out.”

“All of the pieces are falling into place for Georgia to decide control of the Senate again. And just like in 2020, it might take extra weeks of campaigning to do it,” Politico reports.

“Public polling data shows the race between Sen. Raphael Warnock (D-Ga.) and Republican Herschel Walker is close, with Warnock building small leads in most surveys. The national environment is better for the GOP, but Warnock is better liked by voters.”

“But critically, there’s another candidate on the ballot in November, Libertarian Chase Oliver, pulling in a few points of support in some surveys. While Warnock is leading in a number of polls, he’s not clearing 50 percent in many. And in Georgia, if no candidate gets a majority of the vote, the top two proceed to a head-to-head Dec. 6 runoff — the same circumstances that saw the state’s voters tip control of the Senate to Democrats last year.”

TRUMP 2024. Tim Miller: “If you, like me, had been compartmentalizing a Trump 2024 run for mental-health purposes, I’m sorry to break it to you, but he looks like a man who is definitely running for president in 2024. His CPAC speech this weekend was a rude awakening as to both his intentions and the strength he would bring to that campaign.”

“His hands may be tiny and soft, but his grip on the party is pretty tight.”

“But as Mr. Trump weighs a new campaign for the White House in 2024, many GOP lawmakers aren’t ready to throw their support behind him. In interviews with nearly three dozen Republican lawmakers who were asked whether Mr. Trump should run, many deflected the question, saying that Mr. Trump’s decision is up to him without endorsing the idea…”

Sen. Ted Cruz told Fox News that he will “wait and see” if former President Trump decides to run before making his own decision about running for president in 2024. Said Cruz: “Everyone is going to wait and see what Donald Trump decides and make decisions from there.”

Matthew Continetti: “Today caps off the worst week yet for Republicans in the 2022 campaign cycle. Their troubles began with Senate passage of the Chips and Science Act on Wednesday, July 27, and culminated in the Kansas pro-life rout on Tuesday, August 2.”

“Before last week, the party was riding a red wave to victory in November’s elections. Now, one month before the campaign begins in earnest on Labor Day, aimless Republicans must fend off a Democratic Party that is playing offense.”

“Since January, judges in Alabama, Georgia, Louisiana and Ohio have found that Republican legislators illegally drew those states’ congressional maps along racial or partisan lines, or that a trial very likely would conclude that they did. In years past, judges who have reached similar findings have ordered new maps, or had an expert draw them, to ensure that coming elections were fair,” the New York Times reports.

“But a shift in election law philosophy at the Supreme Court, combined with a new aggressiveness among Republicans who drew the maps, has upended that model for the elections in November. This time, all four states are using the rejected maps, and questions about their legality for future elections will be hashed out in court later.”