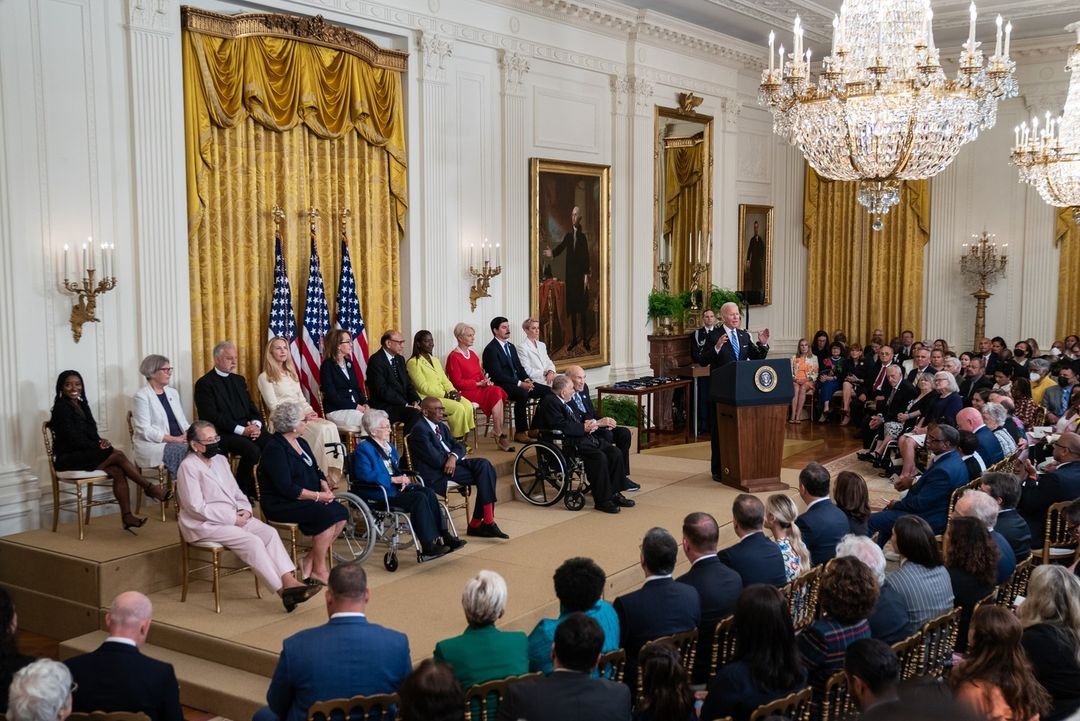 After a 16-hour marathon debate and series of amendments that went through the night, the U.S. Senate passed a monumental climate, tax and health care spending package that Democrats negotiated over 14 months.

The sprawling package — which nearly fell apart again and again — is aimed at lowering health-care costs, raising taxes on corporations, reducing the federal budget deficit and injecting a historic burst of funding into efforts to combat climate change.

The bill passed only with Democratic votes, 50 to 50, with Vice President Kamala Harris breaking the tie.

The bill now heads to the House, which will come back into session on Friday. If it passes, it will be sent to President Biden for his signature.

“We’ve been fighting for this for decades. Now I can look my kids in the eye and say we’re really doing something about climate.” — Sen. Brian Schatz (D-HI), quoted by the New York Times, leaving the Senate chambers in tears this afternoon.

Sen. Amy Klobuchar (D-MN) commenting on the 14-hour vote-a-rama in the Senate: “I’m good on little sleep but this is absurd. It’s only Republican amendments now with all 50 Democrats not letting them derail bill. Hour after hour and vote after vote. We will pass this bill. We will reduce deficit, bring down drug prices and take on climate change.”

“Senate Democrats watched Sunday dawn from the Senate floor still on track to pass their signature climate, tax and health care package after slogging through an all-night attempt by Republicans to force changes,” Politico reports.

“The $700 billion-plus party-line legislation remained unscathed after more than six hours of ‘vote-a-rama,’ the amendment marathon that allows any senator to force a vote on proposed tweaks to the measure. As of early Sunday morning, the upper chamber had voted on about a dozen and a half potential changes, all of which fell short of the support needed to alter the Democrats’ bill.”

“That was thanks to near-complete unity among Democrats in defeating amendments. The party’s senators locked arms to ward off any changes that could endanger the fragile coalition needed to steer their legislation to passage under rules that allow them to avoid a filibuster.”

Heather Cox Richardson: “The introduction of the Inflation Reduction Act caps what has turned out to be a spectacular week for the Biden administration. Jobs numbers out today showed not the downturn that many expected, but instead the addition of 528,000 new jobs, restoring the U.S. job numbers to where they were before the pandemic and putting unemployment at 3.5%, the lowest rate in 50 years. The United States Chips and Science Act (CHIPS) and the Promise to Address Comprehensive Toxics Act (PACT) have both passed Congress. The president authorized and troops achieved the killing of al-Qaeda leader Ayman al-Zawahiri. And gas prices have hit a 50-day low.”

Playbook: “Passage of the Inflation Reduction Act will make Biden one of the most legislatively successful presidents of the modern era. We once noted that the mismatch between the size of Biden’s ambitions and his margins in Congress made it seem like he was trying to pass a Rhinoceros through a garden hose. It ended up being more like a pony, but it’s still pretty impressive…”

“He also expanded NATO, passed a new gun safety law and passed a bill to address the effects of vets exposed to toxic burn pits. Five out of seven of these laws — all but the two biggies, the ARP and IRA — received significant Republican support.”

“There’s not much debate anymore over whether Biden has been a consequential president. In the long run, his first two years may be remembered as akin to LBJ when it comes to moving his agenda through Congress.”

Simon Bazelton: “As I write this, it’s 6:00 am Eastern time, and 3:00 am on the west coast, where I am. The U.S. Senate is approaching the seventh hour of the ‘vote-a-rama’ process, as they continue to debate the Inflation Reduction Act. The world is asleep, except for the Senators, their staff, a few determined reporters, and a couple politics junkies like me…”

“A few months ago, it looked like Biden was facing a legislatively failed presidency, with little in the way of a lasting legacy on domestic policy. Today, it seems likely that we’re going to get:

“So what do Americans see in Joe Biden — a doddery has-been whom even his own party doesn’t want around, or an improbable superhero? After an extraordinary week in Washington politics, the answer is a bit of both,” AFP reports.

“The 79-year-old’s political obituary has been issued more times than can be counted since he took office in 2021 amid the political wreckage of Donald Trump’s presidency, a pandemic and fear of economic disaster.”

“Now he’s fighting back. Or at least his alter-ego, a comically sinister cartoon character dubbed ‘Dark Brandon’ is.”

“In political nerd circles, the meme has been doing the rounds — and it started going viral on Twitter this week as Biden notched win after against-the-odds win.”

“Republican lawmakers on Sunday successfully stripped a $35 price cap on the cost of insulin for many patients from the ambitious legislative package Democrats are moving through Congress this weekend, invoking arcane Senate rules to jettison the measure,” the Washington Post reports.

“The insulin cap is a long-running ambition of Democrats, who want it to apply to patients on Medicare and private insurance. Republicans left untouched the portion that applies to Medicare patients but stripped the insulin cap for other patients.”

New York Times: “Seven Republicans voted with Democrats to keep the cap for private insurers in the bill, but a 57-to-43 margin is three votes short of overcoming the objection.”

“President Biden tested negative for Covid-19 for a second consecutive day Sunday following his rebound case and was cleared for travel by his doctor,” the Wall Street Journal reports.

“The U.S. Secret Service has given the House Jan. 6 committee a listing of agency-issued cell phone numbers belonging to agents based in Washington, D.C., for the period the panel is investigating,” ABC News reports.

“The move is an unusual step amid heightened scrutiny of the agency’s cooperation with the congressional panel investigating last year’s insurrection and the role then-President Donald Trump played in it.”

Paul Krugman: “Gas prices, defying predictions of a nightmare summer for motorists, are leading the parade… The majority of gas stations in the United States are already charging less than $4 a gallon, and declining wholesale prices suggest that retail prices still have farther to fall.”

“Food prices are also coming down… And business surveys are suggesting a broader decline in inflation.”

“All of this means that official data on consumer prices will almost certainly show much smaller increases over the next few months than the shocking numbers we’ve become accustomed to lately.”

“Over five decades in Washington, Joe Biden knew that the way to influence was to be in the room where it happens. But in the second year of his presidency, some of Biden’s most striking, legacy-defining legislative victories came about by staying out of it,” the AP reports.

“A summer lawmaking blitz has sent bipartisan bills addressing gun violence and boosting the nation’s high-tech manufacturing sector to Biden’s desk, and the president is now on the cusp of securing what he called the ‘final piece’ of his economic agenda with the sudden resurrection of a Democrats-only climate and prescription drug deal. And in a counterintuitive turn for the president who has long promoted his decades of Capitol Hill experience, Biden’s aides chalk up his victories to the fact that he’s been publicly playing the role of cheerleader rather than legislative quarterback.”

“There’s a power struggle underway to be the face of the Republican Party in 2024 — but you wouldn’t know it from attending CPAC Texas,” Politico reports.

“There was no Ron DeSantis. Mike Pence was nowhere to be found. Nikki Haley? Negative. Mike Pompeo? Nope.”

“It was all about Donald Trump, who didn’t have to share the spotlight with a cast of potential presidential primary rivals, as he has at some other top conservative gatherings this year.”

NBC News: “Crucially, influential buck-rakers see his White House as indifferent to them, giving them less reason to stand behind Biden if he looks vulnerable following the midterms. Whether it’s failing to arrange for a White House tour, a grip-and-grin photo with the president, or an invitation to one of his events outside Washington, Democratic insiders say the Biden team’s engagement with donors has been anywhere from nonexistent to woefully ineffectual. That has triggered deep resentment.”

“Pennsylvania GOP gubernatorial nominee Doug Mastriano is threatening to pull out of a scheduled interview with the Jan. 6 select committee, teeing up a legal fight with the panel,” Politico reports.

“In a letter sent to the House committee on Aug. 5, Mastriano’s lawyer, Tim Parlatore, said the Republican would not testify unless Parlatore can record the session. The select panel is sure to reject that condition.”

A North Carolina school district said it plans to put AR-15 guns in every school in the event of a future mass shooting, the Asheville Citizen Times reports.

Said Sheriff Buddy Harwood: “I do not want to have to run back out to the car to grab an AR, because that’s time lost. Hopefully, we’ll never need it, but I want my guys to be as prepared as prepared can be.”

“On Friday, the governor of Indiana signed into law a near-total abortion ban, making the state the first to approve sweeping new restrictions since the Supreme Court overturned Roe v. Wade in June,” the New York Times reports.

“On Saturday morning, one of Indiana’s biggest employers, the pharmaceutical company Eli Lilly, issued a strong objection to the new restrictions. ‘Given this new law,’ it said in a statement, ‘we will be forced to plan for more employment growth outside our home state.’”

“Shortly after, Jon Mills, a spokesman for Cummins, an engine company that employs about 10,000 people in the state, said: ‘The right to make decisions regarding reproductive health ensures that women have the same opportunity as others to participate fully in our work force and that our work force is diverse. There are provisions in the bill that conflict with this, impact our people and impede our ability to attract and retain top talent.’”