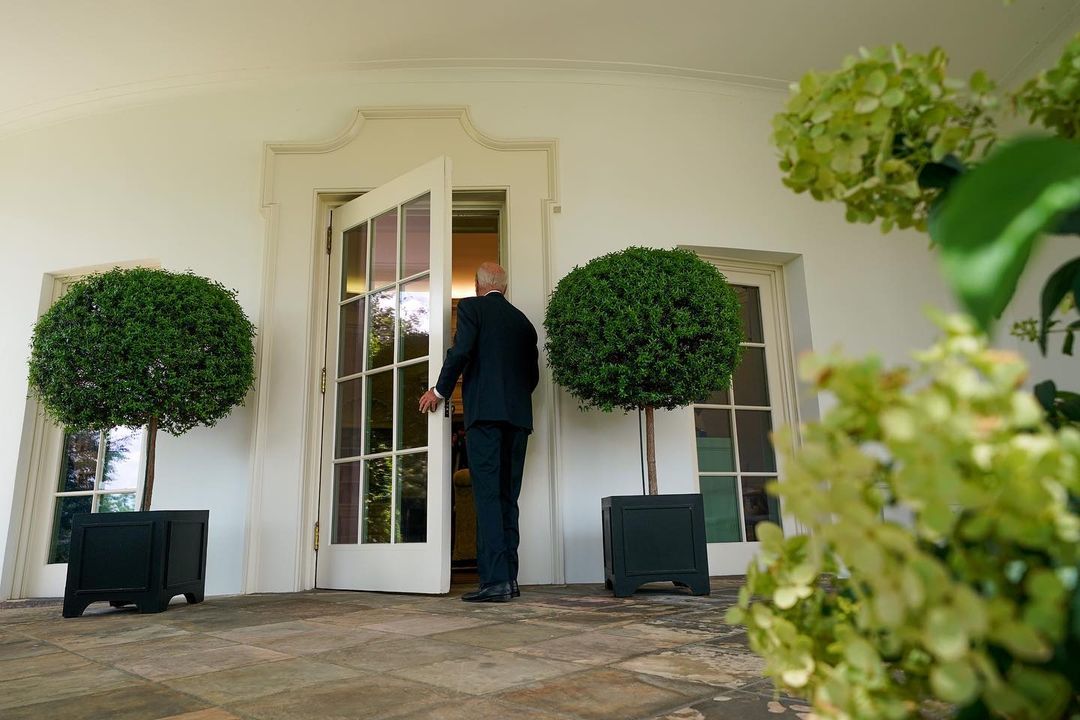 A new Monmouth poll finds Democrats have made slight gains in the public’s preference for party control of Congress since the spring.

Currently, 38% of Americans say they want the Democrats in charge and another 12% have no initial preference but lean toward Democratic control. Republican control is preferred by 34% with another 9% leaning toward the GOP.

More than half of U.S. voters say former President Trump should face criminal charges for his role in the Jan. 6, 2021, attack on the U.S. Capitol, according to a new Harvard CAPS-Harris poll.

GEORGIA U.S. SENATOR. Georgia U.S. Senate hopeful Herschel Walker (R) “said he would participate in an Oct. 14 debate in Savannah against Sen. Raphael Warnock (D) amid pressure from his allies and criticism from Democrats who mocked him for refusing to commit to a showdown,” the Atlanta Journal Constitution reports.

“Everybody are mentally crazy. But some people handle it better than others.” — Georgia U.S. Senate candidate Herschel Walker (R), at a town hall meeting yesterday.

PENNSYLVANIA U.S. SENATOR. “In his ads, and much of the public imagination, John Fetterman is a tattooed everyman from a rugged steel city outside Pittsburgh,” the Philadelphia Inquirer reports.

“That persona has long irked Republicans, who say Fetterman’s distinctive visual cues leave an impression that he’s more working class — and more moderate — than he really is. Now, as Fetterman campaigns as Pennsylvania’s Democratic nominee for U.S. Senate, Republicans are aiming to challenge his story and undercut one of his greatest political strengths. They say his image obscures his roots in a comfortable, suburban family that provided his financial security deep into adulthood.”

Said opponent Mehmet Oz: “He’s a pretend populist. Many folks think it’s because of the way he dresses with his hoodies and his shorts that he’s been working his whole life. It’s quite the opposite.”

RHODE ISLAND GOVERNOR. Secretary of State Nellie Gorbea has publicized a Lake Research Partners internal that shows her beating Gov. Dan McKee 27-22 in the Sept. 13 Democratic primary; former CVS executive Helena Foulkes takes 14%, while former Secretary of State Matt Brown is a distant fourth with just 7%. The last survey we saw was a late June poll from Suffolk University that gave Gorbea a similar 24-20 edge over the governor as Foulkes grabbed 16%.

Campaign finance reports are also now available for all the candidates for the second quarter of the year:

The only serious Republican in the running is businesswoman Ashley Kalus, who raised only a little more than $60,000 from donors during this time but self-funded another $1.7 million. Kalus spent $1.1 million, and she had that same amount available at the end of June.

HAWAII 2ND CD. While former state Sen. Jill Tokuda has far outraised her only serious intra-party rival, state Rep. Patrick Branco, ahead of the Aug. 13 Democratic primary for this open seat, outside groups have spent a total of $1 million to help Branco. One of the state representative’s allies, VoteVets, recently aired an ad attacking Tokuda for receiving a 2012 endorsement from the NRA; the spot does not mention Branco, a former U.S. Foreign Service diplomat who served in Colombia and Pakistan.

Another major Branco backer is the Congressional Hispanic Caucus, which is hoping to elect Hawaii’s first Latino member of Congress. The other organizations in his corner are the crypto-aligned Web3 Forward and Mainstream Democrats PAC, a new group with the stated purpose of thwarting “far-left organizations” that want to take over the Democratic Party. The only poll we’ve seen here was a late June MRG Research survey for Civil Beat and Hawaii News Now that put Tokuda ahead 31-6, but it was conducted before Blanco’s allies began spending here.

ILLINOIS 2ND CD. Rep. Robin Kelly on Friday evening ended her bid to stay on as state Democratic Party chair after acknowledging that she did not have a majority of the Central Committee in her corner. The next day, the body unanimously chose state Rep. Lisa Hernandez, who had the backing of Gov. J.B. Pritzker, as the new party chair.

OKLAHOMA 2ND CD. Fund for a Working Congress, a conservative super PAC that has gotten involved in a few other GOP primaries this cycle, has deployed $400,000 to aid state Rep. Avery Frix in his Aug. 23 Republican primary runoff against former state Sen. Josh Brecheen. The group made its move around the same time that the Club for Growth-backed School Freedom Fund dropped a larger $1.1 million to boost Brecheen.

FLORIDA 14TH CD. A state court judge has booted wealthy businessman Jerry Torres from the Aug. 23 Republican primary ballot because Torres was in Africa when a Mississippi notary claimed he’d been physically present when signing a candidate oath required to file for office. Torres, who had pledged to spend as much as $15 million of his own money in an effort to unseat Democratic Rep. Kathy Castor, says he’ll appeal the ruling. Florida’s 14th District, based around Tampa and St. Petersburg, would have voted 59-40 for Joe Biden, per Dave’s Redistricting App.

FLORIDA 27TH CD. Floridians for Economic Advancement, a PAC that Florida Politics says supports candidates from both parties, has released a poll that finds Republican Rep. María Elvira Salazar leading Democratic state Sen. Annette Taddeo by a 39-34 margin, with a very large 27% of voters undecided. It’s not clear what the PAC’s rooting interest might be, and it didn’t even mention its pollster by name in its slide deck detailing the results. However, FiveThirtyEight reports that the poll was conducted by Alvarado Strategies, a firm run by GOP strategist Alex Alvarado, who is a target of an investigation into a Republican scheme to promote fake “ghost candidates” to undermine Democrats in three key state Senate races in 2020.

NEW YORK 3RD, 4TH, and 16TH CDs. 32BJ SEIU, which represents building workers and is one of the most politically influential labor unions in the New York City area, issued endorsements on Monday in a number of local races with contested Democratic primaries. In the open 3rd and 4th Districts on Long Island, 32BJ is supporting deputy Suffolk County Executive Jon Kaiman and former Hempstead Supervisor Laura Gillen, respectively, while in the Bronx and Westchester-based 16th District, it’s backing Rep. Jamaal Bowman, who faces a couple of challengers. The union did not take sides in the open 10th District or the member vs. member fight in the 12th between Reps. Carolyn Maloney and Jerry Nadler.

NEW YORK 10TH CD. While it’s standard practice for Nancy Pelosi to support members of her caucus, Rep. Mondaire Jones’ journey to New York’s 10th District was anything but normal, so it’s worth noting that Pelosi has given the freshman congressman her endorsement three weeks before the crowded Democratic primary gets resolved. Jones was squeezed out of the redrawn 17th District, which included his home base of Rockland County in the lower Hudson Valley well to the north of New York City, when DCCC chair Sean Patrick Maloney decided to abandon the 18th District to run one seat to the south instead. Jones decided to migrate to the 10th, a new district in lower Manhattan and northwestern Brooklyn that’s open because Reps. Jerry Nadler and Carolyn Maloney are squaring off in the revamped 12th on the Upper East and Upper West sides.

NEW MEXICO 2ND CD. Las Cruces City Councilman Gabe Vasquez has released the first public poll of New Mexico’s reconfigured 2nd Congressional District, and the poll, from Global Strategy Group, shows him narrowly edging past Republican Rep. Yvette Herrell by a 45-44 margin. Democrats shifted the 2nd dramatically in redistricting, transforming it from a seat that voted 55-43 for Donald Trump to one that would have backed Joe Biden 52-46.

VERMONT AT LARGE CD. A new poll from Data for Progress of Vermont’s Aug. 9 Democratic primary finds state Sen. Becca Balint with a wide 59-27 lead on Lt. Gov. Molly Gray in the race for the state’s open at-large House seat. That’s similar to a recent survey from the University of New Hampshire, which had Balint ahead 63-21.

BALTIMORE COUNTY STATE’S ATTORNEY. Almost two weeks after the Democratic primary, incumbent Scott Shellenberger learned he’d defeated progressive challenger Robbie Leonard by a 51-49 margin for the right to seek a fifth four-year term as Baltimore County’s top prosecutor. The race was the first time Shellenberger had faced a primary opponent since first winning election in 2006. He’ll now square off against Republican James Haynes in November for this populous suburban county—which surrounds but does not include the city of Baltimore—that Joe Biden carried 62-35.