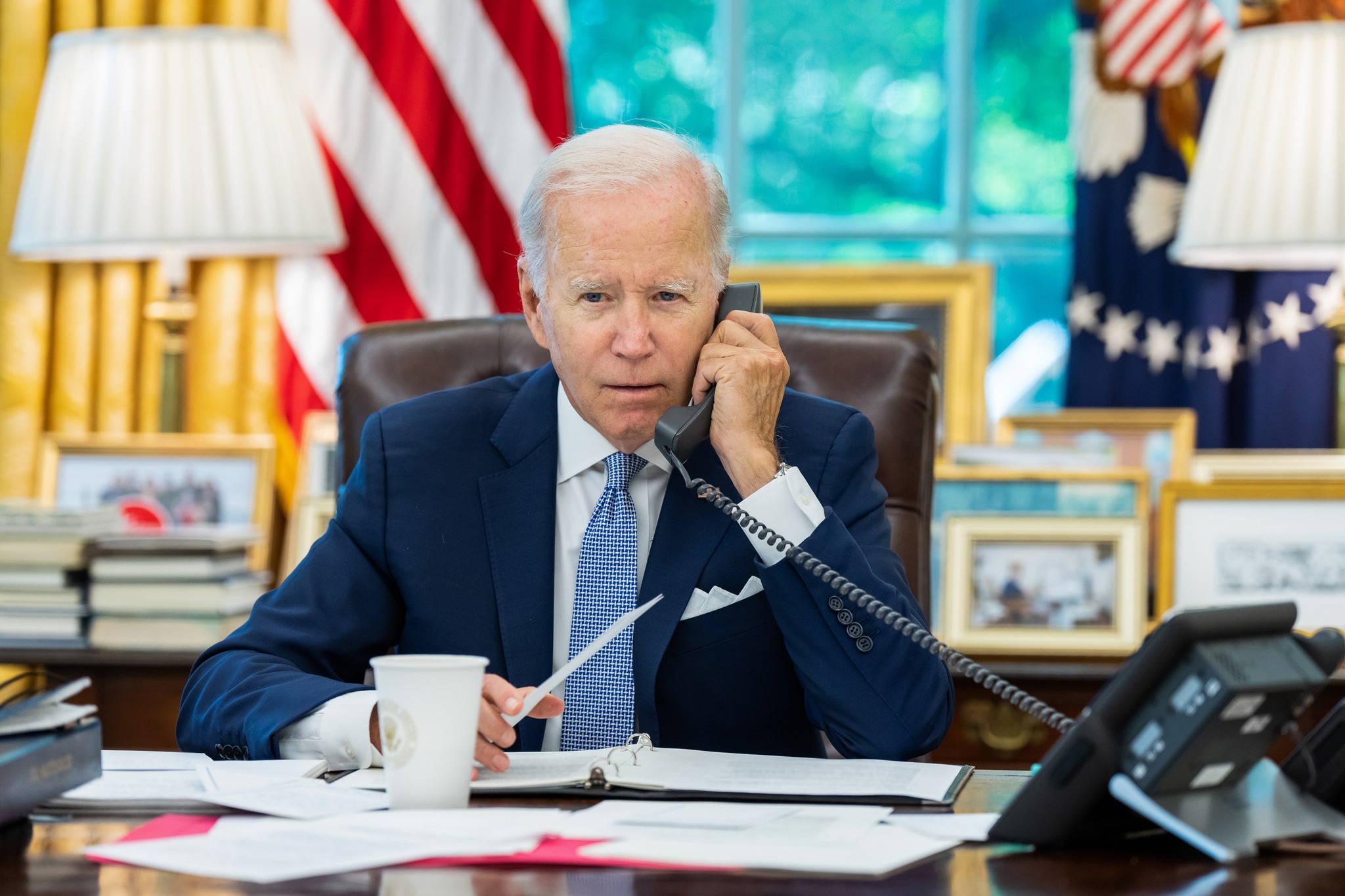 “Reps. Peter Meijer, Jaime Herrera Beutler and Dan Newhouse have not grabbed the same type of headlines that other Republicans who voted to impeach President Donald Trump in January 2021,” the Washington Post reports.

“The Republican trio have remained steadfast in support of their votes against Trump but have otherwise mostly kept their heads down and tried to work hard on issues they have long focused on.”

“On Tuesday, all three will learn their political fate with Republican voters back home, helping determine if there was ever a path to victory for a Republican who so directly rebuked Trump. And it will go a long way to determining whether there will be one, two or more pro-impeachment Republicans left when the new Congress is sworn in next January.”

A new USA Today/Suffolk University poll finds — once again — that most Americans don’t want President Biden or Donald Trump to run for president in 2024, although Biden leads 45% to 41% in a possible matchup.

Rep. Dean Phillips (D-MN) said he does not think President Joe Biden should run for reelection in 2024, preferring instead a younger, more “dynamic” Democrat be at the top of the presidential ticket, MinnPost reports.

Said Phillips: “I think the country would be well-served by a new generation of compelling, well-prepared, dynamic Democrats who step up.”

He added: “I think it’s time for a generational change. And I think most of my colleagues agree with that.”

Gallup: “President Joe Biden’s job approval rating has fallen below 40% for the first time and now sits at a personal low of 38%.”

“No president elected to his first term has had a lower sixth-quarter average than Biden, although Jimmy Carter’s and Donald Trump’s ratings were only slightly better, at 42%. Barack Obama, Bill Clinton and Ronald Reagan also averaged below majority approval.”

“Democratic National Committee officials have begun to inform top national and state party members that the decision on which states will go first in the party’s 2024 nominating process has been delayed until after the midterms,” CNN reports.

Associated Press: “The committee was also mulling adding a fifth early primary contest prior to Super Tuesday when a large number of states traditionally vote.”

Fully 58% of the country supports a federal law establishing the right to an abortion before a fetus can survive outside the womb, the standard the Supreme Court enshrined for nearly 50 years and overturned last month.

And almost a third of Americans say abortion will be one of the “single most important” issues shaping their midterm vote. That’s less than the 39% calling rising prices a top issue but higher than the 23% citing crime and 20% citing immigration.

“Concern about abortion access has exploded among Democratic voters as an election issue over the past month, a new USA Today/Suffolk University Poll finds, as the repercussions of the Supreme Court decision overturning Roe v. Wade begin to reverberate.”

“Now, 64% of Democrats say the court’s action makes them more likely to vote in November, potentially a crucial factor in midterm elections that traditionally have low turnout. That’s more than double the 29% of Democrats who expressed that view in a USA Today/Suffolk survey taken after a draft of the landmark decision was leaked in June.”

“Concern about abortion access has exploded among Democratic voters as an election issue over the past month, a new USA Today/Suffolk University Poll finds, as the repercussions of the Supreme Court decision overturning Roe v. Wade begin to reverberate.”

“Now, 64% of Democrats say the court’s action makes them more likely to vote in November, potentially a crucial factor in midterm elections that traditionally have low turnout. That’s more than double the 29% of Democrats who expressed that view in a USA Today/Suffolk survey taken after a draft of the landmark decision was leaked in June.”

“The numbers are in and it’s official: The attack on Michigan state Sen. Mallory McMorrow (D) backfired,” Politico reports.

“The Michigan Republican state senator who falsely described McMorrow as a ‘groomer’ in an April fundraising email raised less than $300 in the days following the solicitation, according to campaign finance filings. McMorrow, on the other hand, raised more than $1 million.”

A teenager who says she was body-shamed by Rep. Matt Gaetz (R-FL) has raised more than $1.5 million for abortion funds in just three days, USA Today reports.

Jonathan Bernstein: “As third-party launches go, it’s rare to have one with as little intuitive appeal as that of the Forward Party, Andrew Yang’s latest attempt to draw attention to himself. Yang is joined by former New Jersey Governor Christine Todd Whitman and by David Jolly, who was a Republican member of the House of Representatives from Florida for two terms. Whitman and Jolly were moderate Republicans whose party no longer has any use for moderates; Yang ran for president in 2020 and then for mayor of New York City last year without making much of a mark. In addition to a lack of star power, the new party also features no issue agenda.”

“It’s hard to figure out just who exactly the voter pool for this effort might be.”

“Many Democrats are cautiously welcoming President Joe Biden on the campaign trail, banking on his assets outweighing his unpopularity in the party’s bid to retain control of both chambers of Congress,” Bloomberg reports.

“A dozen incumbents in tight races told Bloomberg Government they’d embrace the beleaguered leader of their party, albeit with varying degrees of enthusiasm and commitment.”

The ads — sponsored by an anti-Greitens super PAC which has raised nearly $8 million since it was created last month — focus on Greitens’ history of domestic violence allegations and criminal charges related to blackmailing his mistress.

SurveyUSA has conducted a new survey for Gray Television’s several Missouri TV stations testing out the Aug. 2 primaries for both parties as well as several potential general election matchups.

Looking ahead to November, SurveyUSA has matched up the top three Republicans against each Democrat along with former U.S. Attorney John Wood, a Republican-turned-independent who launched his campaign in June and has benefited from a $5 million ad blitz from an allied super PAC:

In the Senate race, former Thiel Capital chief operating officer Blake Masters leads 36-21 over businessman Jim Lamon, with state Attorney General Mark Brnovich at 12%, which is an improvement for Masters over his 25-18 lead against Lamon in the same firm’s poll from earlier in July. For governor, they have Trump-endorsed former TV news anchor Kari Lake up 51-33 over Board of Regents member Karrin Taylor Robson, which is a big increase for Lake over her 39-31 edge earlier in July.

For secretary of state, Trump-backed state Rep. Mark Finchem leads 32-11 over advertising executive Beau Lane, with state Sen. Michelle Ugenti-Rita at 9% and state Rep. Shawnna Bolick at 8%. Their prior poll earlier in July saw just a 14-6 Finchem lead over Ugenti-Rita with Lane at 5% and Bolick at 3%.

Politico: “Finchem, an Arizona state lawmaker, is running with former President Donald Trump’s endorsement in Tuesday’s Republican primary for secretary of state there. He has support from a coalition of other like-minded candidates running to be election administrators in their own states, which has gained traction in several other close 2020 swing states. And Finchem has a significant edge in a rare public poll of the secretary of state race published Friday.”

Meanwhile, a relatively new pollster called Alloy Analytics has also tested the GOP primary for governor, and their poll finds Lake ahead 45-35 over Robson.

In the GOP gubernatorial race, Karrin Robson (R) is just ahead of Trump-endorsed Kari Lake (R), 47% to 46%

OKLAHOMA 2ND CD. The Club for Growth-backed School Freedom Fund has recently dropped a combined $1.1 million on a TV and mail ad campaign backing former state Sen. Josh Brecheen and opposing state Rep. Avery Frix in advance of the Aug. 23 Republican primary runoff, though no ad copies are available yet.

FLORIDA 13TH CD. Attorney Kevin Hayslett has released an internal poll from American Viewpoint finding him surging into just a 36-34 deficit against 2020 candidate Anna Paulina Luna in the Aug. 23 GOP primary, while 2020 nominee Amanda Makki takes just 9%. Hayslett’s campaign disclosed that a previously unreleased June poll had Luna up by a hefty 42-19 with Makki at 13% to argue that he has momentum. This release comes just a few weeks after a Tyson Group survey from early July for the state GOP had found Luna ahead of Hayslett 37-17 with Makki at 10%.