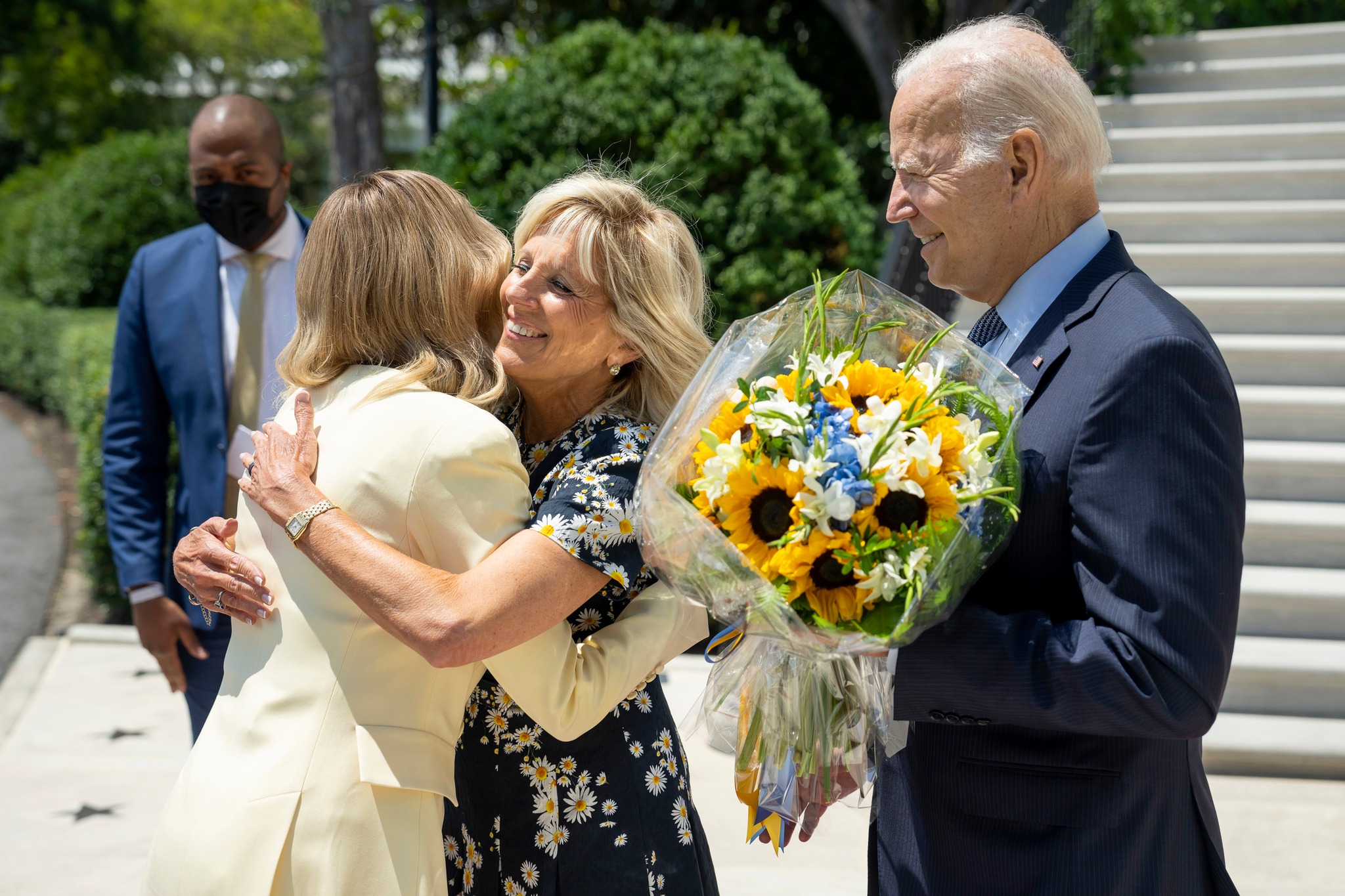 The CBS News Battleground Tracker model finds Republicans start the 2022 campaign with a lead in the race for the House, with 230 seats to 205 seats for Democrats. The party with 218 seats controls the House.

Larry Sabato’s Crystal Ball made 10 House rating changes — 9 of which benefit Republicans. The bottom line: “Our overall best guess at the net change in the House — a GOP gain somewhere in the 20s — remains unchanged.”

Amy Walter: “The explanation for this seeming disconnect between the president’s weak approval ratings and stronger showings for Democratic House and Senate candidates seem to be driven by a few factors: a post-Dobbs energizing of the Democratic base, weak and/or flawed GOP senate candidates, and the January 6th hearings. In other words, the media focus has increasingly been centered on issues that are harmful for the GOP.”

“Yet, there’s nothing new about a late summer ‘reassessment’ of midterm assumptions. In fact, like clockwork, the out-party right about now starts to fret that their advantage is slipping, while the in-party sees green shoots springing from a barren landscape.”

KANSAS REFERENDUM. “In the final days before Kansans decide whether to remove abortion rights protections from their State Constitution, the politically competitive Kansas City suburbs have become hotbeds of activism,” the New York Times reports.

“There may be no greater motivator in modern American politics than anger. And for months, Republican voters enraged by the Biden administration have been explosively energized about this year’s elections. Democrats, meanwhile, have confronted erosion with their base and significant challenges with independent voters.”

“But interviews with more than 40 voters in populous Johnson County, Kan., this week show that after the fall of Roe, Republicans no longer have a monopoly on fury — especially in states where abortion rights are clearly on the ballot and particularly in the battleground suburbs.”

USA Today: Abortion rights face a key test in upcoming Kansas vote, the first of its kind since the fall of Roe.

Said Manchin: “If Joe Biden runs again and he is the Democratic nominee, depending on who the Republican nominee is, we will just have to wait and see.”

Tara Palmeri: “To the G.O.P. establishment—a club that Dr. Mehmet Oz is eager to join—the aspiring senator from Pennsylvania is running a lazy man’s campaign. He has at least one big advantage over his opponent, John Fetterman: namely his health. Fetterman, after all, has understandably been M.I.A. on the campaign trail since his stroke in mid-May, around the time of the primary election.”

“And although Oz faced a brutal, exhaustive, and expensive primary against David McCormick, seasoned political professionals tell me that Oz should have been filling that vacuum with rallies, events, advertising, handshaking, door knocking and mainly, you know, campaigning. Instead, around the time of the recount, Oz spent part of his time in Pennsylvania and the other part of the time in Palm Beach until at least June 9, waiting it out and doing some fundraising.”

Rep. Bill Pascrell (D-NJ) nominated Pennsylvania U.S. Senate candidate Mehmet Oz (R) for membership in the New Jersey Hall of Fame after rival John Fetterman (D) started a petition to get him inducted into it.

Politico: “The Senate Republicans’ campaign arm is privately sounding the alarm about physician Mehmet Oz’s bid for the Senate in the critical battleground of Pennsylvania, while telling donors that the party still has a path to winning the majority without the state.”

“Doug Mastriano, the Republican nominee for Pennsylvania governor, is facing intense criticism for his ties to a far-right social media site, Gab, that traffics in white nationalist rhetoric and whose founder has made overtly antisemitic comments in recent days,” the Washington Post reports.

HuffPost: “Doug Mastriano has a secret. The Republican nominee for Pennsylvania governor says he’s chosen someone to serve as the commonwealth’s next secretary of state — a position that will hold enormous power over the 2024 presidential election. But he won’t tell voters who it is.”

“Dozens of former Republican and Democratic officials announced on Wednesday a new national political third party to appeal to millions of voters they say are dismayed with what they see as America’s dysfunctional two-party system,” Reuters reports.

“The new party, called Forward and whose creation was first reported by Reuters, will initially be co-chaired by former Democratic presidential candidate Andrew Yang and Christine Todd Whitman, the former Republican governor of New Jersey. They hope the party will become a viable alternative to the Republican and Democratic parties that dominate U.S. politics.”

“New York voters who dislike the Democrat or Republican candidates for governor have traditionally been able to cast their ballots for a long-shot candidate from any number of so-called third parties,” the New York Times reports.

“But this year, for the first time in over 75 years, the state ballot appears destined to offer only two choices: Gov. Kathy Hochul, a Democrat, and Representative Lee Zeldin, a Republican.”

“The paucity of options is largely due to former Gov. Andrew Cuomo, who championed changes in election law two years ago that made it far more difficult for third parties to get on the ballot. The changes to ballot access law tripled the number of voter signatures required for groups to get on the November ballot and forced political parties to qualify every two years instead of four.”

Tim Miller: “During the Trump era I have often been the rain cloud that washes away the luminescent longings of the third-party dreamers, which isn’t a job I enjoy since many are friends or mentors or folks whose courage in the face of Trumpism I deeply admire.”

“But I soldier on anyway. Trying to convince them they are actually Red Dog Democrats. Or explaining why their idea might accidentally bring about a fascism even though they have nice arms and nicer intentions.”

“But given the boom cycle of new parties, clearly that message is not getting through. So today I wanted to offer another exercise.”

WYOMING AT LARGE CD. In the closing weeks of her primary campaign, Rep. Liz Cheney (R-WY) is up with a new TV ad that contrasts her primary opponents’ stances about fraud in the 2020 election with her own, CBS News reports.

“Californians have contributed more to Republican Rep. Liz Cheney than donors from any other state, including her Wyoming home, as the outspoken Trump critic faces an increasingly perilous reelection bid,” the Los Angeles Times reports.

“Many California donors, including Hollywood and Silicon Valley moguls, vehemently disagree with most of Cheney’s policies but applaud her fight against former President Trump’s false claim that he won the 2020 election.”

MARYLAND ATTORNEY GENERAL. “The Republican Party’s nominee for Maryland attorney general hosted a series of five radio shows in 2006 devoted to arguing in support of 9/11 conspiracy theories questioning if the terror attack was the work of an ‘elite bureaucrat’ who had demolition charges in every building in New York City and even suggesting if those who died after a hijacked plane hit the Pentagon were killed elsewhere,” CNN reports.

WISCONSIN U.S. SENATOR. Alex Lasry (D), who dropped out of the U.S. Senate race in Wisconsin, said he will use $584,000 worth of previously purchased airtime to run attack ads against Sen. Ron Johnson (R-WI), NBC News reports.

Godlewski’s decision to drop out of the race comes just days after fellow front-runners Tom Nelson (D) and Alex Lasry (D) also dropped out of the race and endorsed Barnes.

ARIZONA GOVERNOR. Arizona Agenda: “In the past five months, two-thirds of Democrat Katie Hobbs’ gubernatorial campaign staff have left, and several describe the campaign as an emotionally abusive atmosphere that got so bad, they were to upend their lives and plans mid-election and seek employment elsewhere.”

“The problem isn’t Hobbs herself, the former staffers told us. Instead, it was created by a new campaign manager.”

ARIZONA U.S. SENATOR 2022. “Blake Masters, a venture capitalist running for Senate in Arizona, is among the many Republicans who argue that the left’s obsession with racial identity politics is driving Latino voters away from the Democratic Party,” the New York Times reports.

“But as he vies for the Republican nomination, Mr. Masters has pushed a different sort of racial politics that could repel Latinos in the state.”

“For months, Mr. Masters has promoted a specious theory portraying illegal immigration across the southern border as part of an elaborate Democratic power grab. In speeches, social media videos and podcast interviews, he has asserted that Democrats are trying to encourage immigration so their party can dilute the political power of native-born voters.”

MISSOURI U.S. SENATOR. Rep. Billy Long (R-MO), who is running for U.S. Senate in Missouri, predicted “white smoke soon from 45” on the race.

The Assembly: “An ambitious student from St. Louis left a mark at Duke University before becoming governor of Missouri and resigning amid scandal. As Eric Greitens attempts a comeback, people who thought they knew him wonder who he really is.”

“Five of the original 10 GOP candidates for governor didn’t make the ballot due to fraudulent petition signatures. One of the remaining candidates was arrested on a misdemeanor charge for participating in the Jan. 6 Capitol riot. Political newcomer and conservative commentator Tudor Dixon has emerged as the slight front-runner in what looks like a very close race.”

Associated Press: “That’s a sign of how the Supreme Court’s decision in June to repeal a woman’s federal constitutional right to abortion has scrambled the political dynamics heading into the fall elections, when control of Congress is at stake. A half-dozen of the most vulnerable House members — all of them women, all representing swaths of suburban voters — see the issue as one that could help them win in an otherwise difficult political climate.”

New York Times: “Their bleak prospects reflect the shifting role that conspiracy theories play in American politics. The Republican Party flirted with QAnon in 2020, as several Q-linked candidates sought higher office and Q merchandise appeared at rallies for then-President Donald Trump across the country. Yet identifying with the movement emerged as a political liability. As they have during this election cycle, Democrats attacked Q-linked candidates as extremists, and all but two — Representatives Marjorie Taylor Greene of Georgia and Lauren Boebert of Colorado — lost their races.”

“But many QAnon themes have burrowed deeper into mainstream Republican politics this year, experts say, including the false belief that ‘evil’ deep-state operatives control the government and that Mr. Trump is waging a war against them. Savvy candidates have found ways to tap that excitement — all without explicitly mentioning the conspiracy theory.”