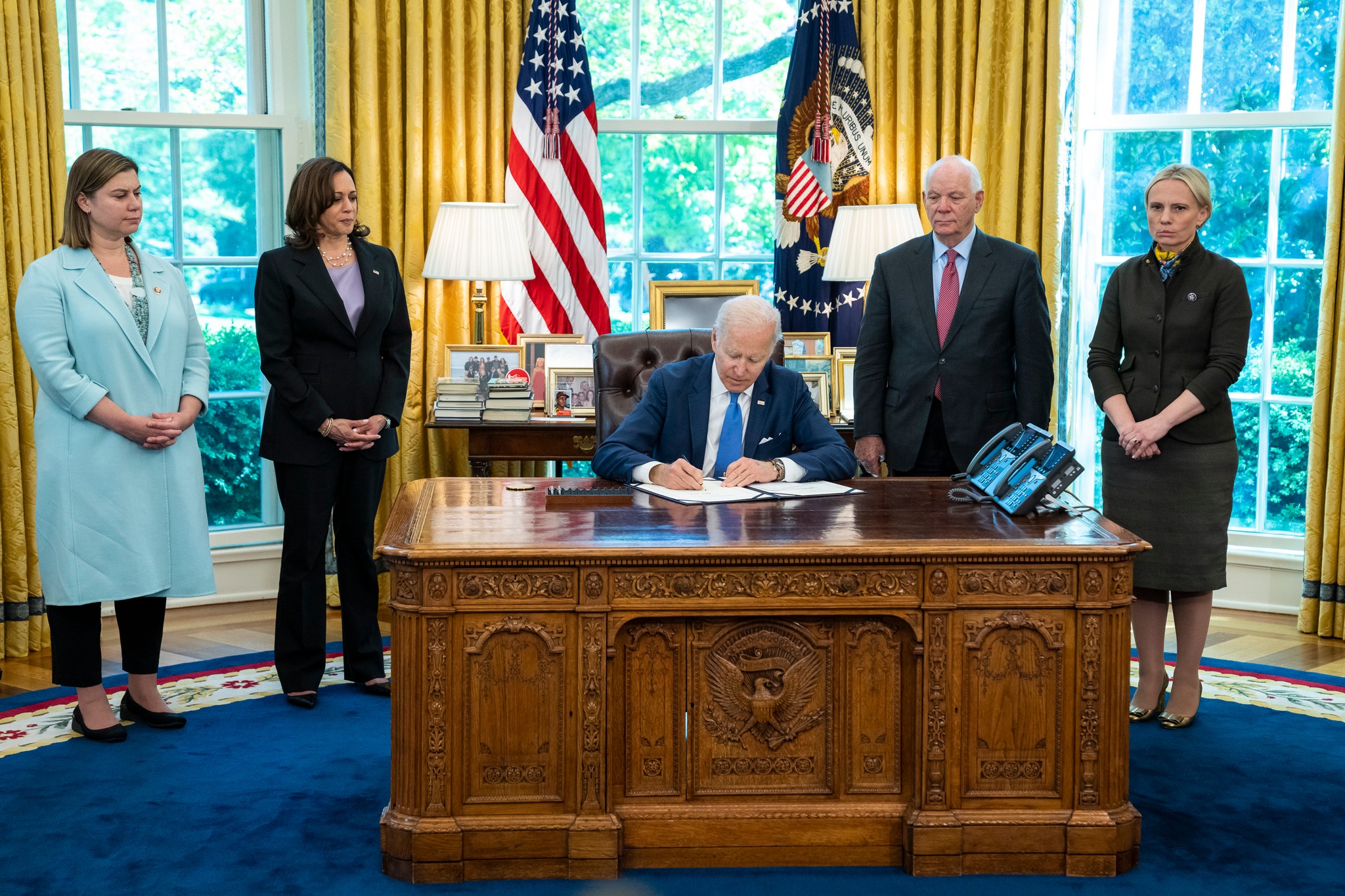 “Most Georgia voters oppose a new restrictive abortion law that took effect last week, and many say a candidate’s support or opposition to the procedure will have an impact on who gets their vote,” according to a new Atlanta Journal-Constitution poll.

Also interesting: “About 42% of likely voters said they’re more likely to vote for a candidate who wants to protect abortion rights. About 26% said they’re motivated to vote for candidates who want to limit access to the procedure. About one-quarter said it makes no difference.”

PENNSYLVANIA U.S. SENATOR. The Daily Beast discovered that in addition to his lavish mansion in Cliffside Park, New Jersey, GOP “Pennsylvania” Senate nominee Dr. Mehmet Oz has another property in New Jersey that he hasn’t disclosed: A condo less than 10 minutes away from the mansion.

That on its own is probably not going to help Oz as he tries to convince Pennsylvanians that he definitely isn’t a Jersey carpetbagger who knows he isn’t likely to win a Senate race in his blue home state and is therefore using his in-laws’ address to run in a state where he thinks he’s got a better shot. But then there’s the fact that…

Rep. Adam Kinzinger (R-IL) criticized Vice President Kamala Harris for introducing herself at a meeting with her pronouns.

Said Kinzinger: “If you ever wonder why the left still can’t win elections despite the insanity of Trumpism, save stuff like this for reference later. You can get mad at me, but I’m not wrong.”

MINNESOTA 1ST CD. In a surprise, state Rep. Jeremy Munson announced Tuesday that he would wage a real campaign against former Department of Agriculture official Brad Finstad in the Aug. 9 Republican primary for a full term, a contest that will take place on the same day that Finstad is the GOP nominee in the special election for the final months of the late Rep. Jim Hagedorn’s term. Finstad edged out Munson 38-37―a margin of 427 votes― in the May special primary.

Munson filed to run in the regular contest days after that narrow defeat, but until now, it looked like the state representative was merely running a ghost campaign so he could raise money to pay back a $200,000 loan. He declared this week, though, that he was really trying to beat Finstad because “over the last few weeks Brad has failed to show he’s the conservative to fight inflation.” Munson finished June with $210,000 on hand, which was only a bit less than the $270,000 that Finstad had at his disposal; unlike Finstad, Munson also has just one race to worry about in two weeks.

The state representative, however, acknowledged that he’d vote for Finstad in two weeks in his special election contest against the Democratic nominee, former Hormel CEO Jeff Ettinger. The day’s two contests will take place under different maps, though 90% of the new 1st’s denizens live within the boundaries of the existing constituency. Trump carried the old version of this southern Minnesota seat 54-44, while he took the revamped district by a slightly smaller 53-44 margin.

Ettinger, who ended June with $250,000 on hand, began running negative ads against Finstad before Munson kicked off his rematch. The Democrat’s newest spot argues that “Finstad is a politician and lobbyist who voted with his party leaders down the line,” while Ettinger is a businessman who “know[s] how to get stuff done.” Ettinger faces only a few little-known foes in the regular Democratic primary, so he’ll likely be on the ballot again this fall no matter how the special turns out.

NEW JERSEY 1ST CD. Republican Claire Gustafson, a perennial candidate who has attracted little attention for her second campaign against Democratic incumbent Donald Norcross, has released an internal from Grassroots Targeting that shows the congressman ahead only 49-44. Norcross defeated Gustafson 62-38 in 2020 as Biden was carrying the old version of this South Jersey seat 62-37; the redrawn constituency would have favored the president by that same margin.

Gustafson had only $22,000 on hand at the end of March, and the New Jersey Globe notes she still hasn’t filed FEC reports for the June primary or the rest of the second quarter.

NEW YORK 22ND CD. The crypto-aligned Protect Our Future is dropping nearly $400,000 to promote Navy veteran Francis Conole, who ended June with a huge financial edge over his three Democratic primary rivals. This is the first outside spending we’ve seen for either primary to replace retiring GOP Rep. John Katko.

VIRGINIA 2ND CD. Democratic Rep. Elaine Luria, who is a member of the Jan. 6 committee, is running one of the first general election ads we’ve seen this cycle focused entirely on the attack. Most of the ad shows footage of last year’s violence and conservatives either downplaying or bragging about what happened, with the congresswoman concluding the spot by saying that “it will take all of us to protect our democracy.”

A new CNN poll finds 75% of Democratic and Democratic-leaning voters want the party to nominate someone other than President Joe Biden in the 2024 election, a sharp increase from earlier this year.

David Weigel: “We are drowning in evidence that Democratic voters don’t want the president to seek another term.”

“A judge in Atlanta has rejected an appeal by a group of voters and affirmed the Georgia secretary of state’s decision that Rep. Marjorie Taylor Greene (R-GA) is eligible to run for reelection,” the AP reports.

Jonathan Bernstein: “That doesn’t mean that Democrats shouldn’t contest the seat, which is in a western Michigan district where Democrats seem to be strong, and is therefore one of a small number of pickup opportunities for the party. Of course they should.”

“But the case for trying to take Meijer out in a primary by helping him to lose to an extremist is a lot weaker. Incentives matter in politics, and if Democrats treat those who stood up for democracy when it mattered the same way they treat those who didn’t, what kinds of incentives will that create? The more that those who stood up to Trump lose in primaries, the more Republican party actors will believe in Trump’s influence, which in turn will make him that much more influential within the party.”

“A growing number of House Democrats are seething at their own campaign arm for meddling in a GOP primary to promote a pro-Trump election conspiracy theorist — after months of warning that such candidates were a threat to democracy,” Politico reports.

“They’re playing with matches, and they’ve got lighter fluid on their hands. If one of these political candidates win, it’ll be arson.” — GOP strategist Doug Heye, quoted by the Washington Post, on Democrats boosting extreme right candidates in Republican primaries.

Los Angeles Times: “McCarthy is tasked with introducing himself to more than 200,000 new voters in a district where the GOP’s registration advantage has grown to almost 20 percentage points, the largest in the state. But even in an area that red, McCarthy faces mistrust from voters on his right flank — including some who have supported him in the past.”

BALTIMORE CITY STATE’S ATTORNEY. The Associated Press has projected that defense attorney Ivan Bates has defeated incumbent Marilyn Mosby in the expensive Democratic primary to serve as the top prosecutor for the city of Baltimore. Bates on Sunday evening led prosecutor Thiru Vignarajah, who sported a cross-party endorsement from GOP Gov. Larry Hogan, 40-31​, while Mosby was in third with 29%; there are still mail-in ballots to be tabulated, but both Vignarajah and Mosby have conceded. Democrats have won every election for this post since 1920, and Bates should have no trouble extending that streak in the fall.

Mosby, who rose to national prominence in 2015 just months into her first term when she charged six police officers in the death of Freddie Gray, fended off Bates 49-28 in 2018, with the balance going to Vignarajah. This year, though, the state’s attorney was indicted for allegedly filing false mortgage applications and lying to federal prosecutors. Rather than focus on her legal problems, however, Bates and Vignarajah argued that Mosby had done a poor job prosecuting crime and that they would have a better relationship with law enforcement groups.

Mosby herself raised little money for her bid for a third term and was badly outspent by her two opponents; Bates also benefited from heavy spending from a super PAC funded by 2020 mayoral candidate Mary Miller.

MONTGOMERY COUNTY MD EXECUTIVE. After trailing on election night, incumbent Marc Elrich now has a 39.4-39.1 edge―a margin of 276 votes―against wealthy businessman David Blair with close to 100,000 Democratic primary ballots counted, though the AP has not yet called the race. Four years ago, Elrich beat Blair in a 77-vote cliffhanger.

“Seized by genuine panic about the prospect of Republicans winning control of Congress and governors’ mansions across the country, multiple Democratic leaders and candidates in some of the tightest races are calling on party leaders – including President Joe Biden – to focus on calling out Republicans as ‘extremists,’” CNN reports.

“They don’t think Biden’s poll numbers are going to go up much or inflation is going to go down much. But in the continuing wake of the Supreme Court overturning Roe v. Wade and with hundreds of election deniers on the ballot across the country, many Democratic leaders are looking to reframe the stakes of the midterms around a GOP they say has become a threat to America – arguing that Republican control in states and in Congress would lead to a federal abortion ban, major rights restrictions, and attacks on democracy which could endanger the 2024 presidential election.”