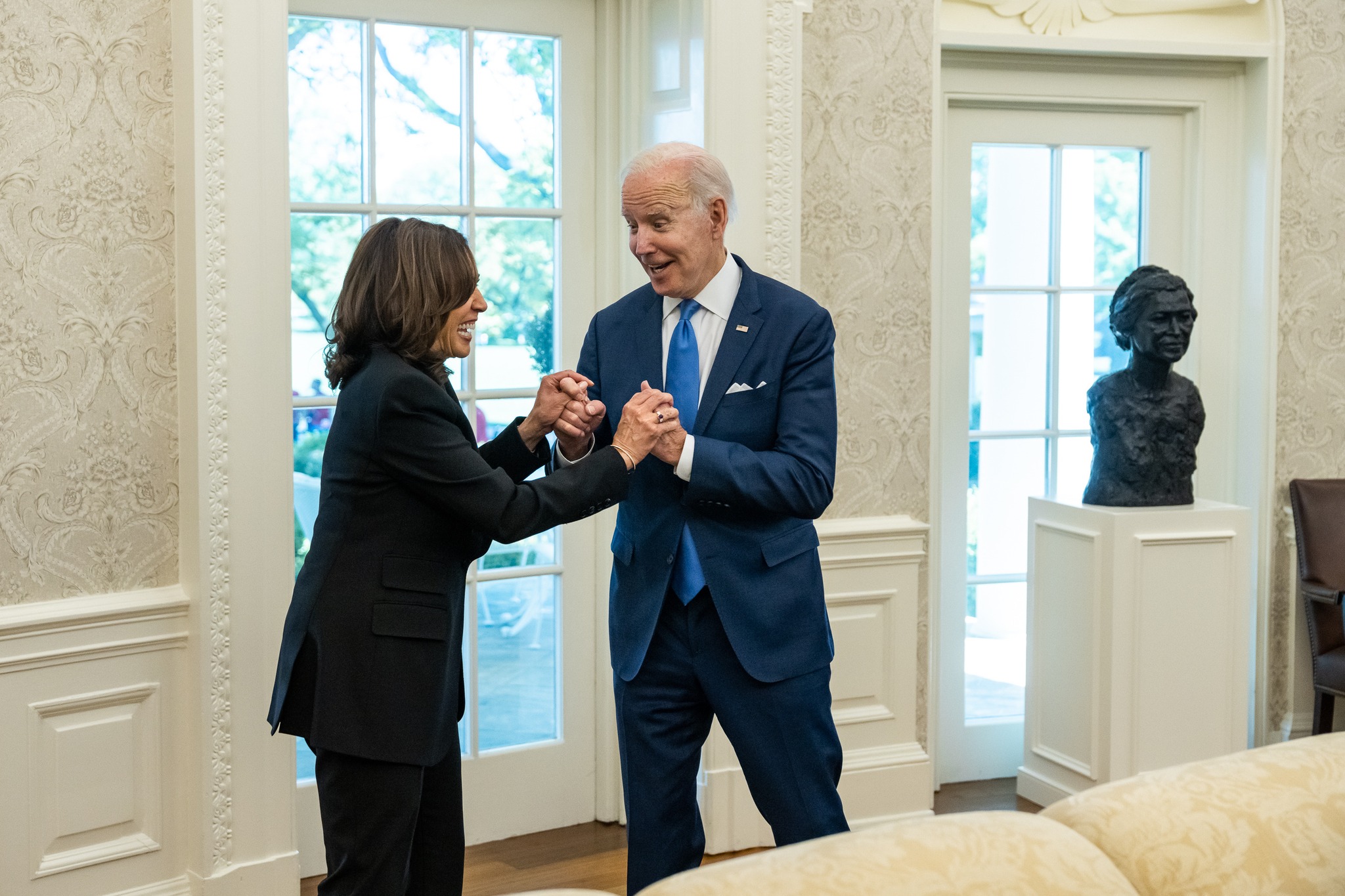 David Wasserman: “House Republicans’ midterm structural advantages are conspicuous as ever: President Biden’s approval rating is at 38%, and the GOP’s leading Super PAC, the Congressional Leadership Fund, ended June with $130 million on hand to the Democratic House Majority PAC’s $60 million. Come the fall, Republicans will be leveraging that to flood the airwaves, tying every Democratic incumbent to historic 9.1% ‘Bidenflation’ and crime.”

“But the last few weeks have called into question the size of the impending ‘red wave.’ Not only has the Dobbs decision infuriated and energized Democrats, but Democrats continue to outpoll Biden’s approval on both the generic ballot and in polls of individual races.”

“In a special election in Nebraska’s 1st CD on June 28, Democrat Patty Pansing Brooks came within a surprising six points of Republican Mike Flood in a rural seat that had voted for Trump by 11 points in 2020. It’s just one positive data point for Democrats, but the timing — just four days after the Dobbs decision was issued — couldn’t be ignored. Now, with gas prices ebbing, some Democrats wonder if a “red tsunami” could be ebbing too.”

Charlie Cook: “Yet there might be one silver lining for Democrats on the distant horizon. Should former President Trump decide, against the advice of nearly every Republican strategist alive, to announce his candidacy before the midterm elections in November, he might energize Democratic voters enough to minimize their losses at the margins. I am not sure it would save one or both majorities, but it certainly has the potential to have a greater impact than abortion, guns, and Jan. 6 combined.”

“As unpopular as Biden is currently, he still bests Trump in most head-to-head matchups. In fact, Trump is arguably the one Republican that Biden might have a decent chance of beating if he ultimately decides to run for reelection.”

Republicans are increasingly concerned that J.D. Vance (R) is “running the worst campaign you can possibly run,” the Daily Beast reports. “Meanwhile, Republicans begrudgingly admit that the Democratic nominee, Rep. Tim Ryan, is perhaps running the best possible campaign from a Democrat in this increasingly conservative state.”

“Ryan has raised a staggering $12 million for his campaign so far. And he is using that war chest to blanket Ohio airwaves with ads touting his blue collar bona fides, amplifying his professed desire to break with fellow Democrats on key issues, like inflation and crime. (Notably, Ryan has been a reliable Democratic vote during his two decades in Congress.)”

“With Vance largely absent on the airwaves and the campaign trail, Republicans fret that Ryan is successfully defining himself before Vance is—and that time is running out for the Republican to right the ship.”

UTAH U.S. SENATOR. “Deeply Republican Utah hasn’t had a competitive Senate general election in decades. This year might be different, with polls showing a political outsider within striking distance of the GOP incumbent,” the Wall Street Journal reports.

“Two-term Sen. Mike Lee is facing a challenge from Evan McMullin, a 46-year-old former Central Intelligence Agency officer and erstwhile Republican, who is running as an independent on a platform of political change and policy moderation. He rose to prominence in 2016, when he mounted a bid for the presidency after Donald Trump won the GOP nod. In his Senate race, he said Mr. Lee is too partisan to represent the Beehive State effectively.”

MARYLAND GOVERNOR. “Wes Moore (D), a first-time candidate for elected office who built an energetic campaign against a crowded and robust field, has won the Democratic nomination for Maryland governor,” the Baltimore Sun reports.

“A bestselling author and former nonprofit leader, Moore defeated former U.S. Labor Secretary Tom Perez as mail-in ballots were being tallied Friday, according to The Associated Press, but after Moore won significantly more in-person votes earlier in the week.”

The Associated Press on Friday called the July 19 Democratic primary for former nonprofit head Wes Moore, and former DNC chair Tom Perez conceded the next day. Moore held a 34-29 lead over Perez on Sunday evening, though the margin could shift as more mail-in ballots are tabulated. Moore would be Maryland’s first Black chief executive, as well as the third African American elected governor of any state.

Moore’s Republican opponent in this dark blue state will be Trump-backed Del. Dan Cox, whom termed-out Gov. Larry Hogan has labeled a “conspiracy-theory-believing QAnon whack-job.” Hogan, who supported former state cabinet official Kelly Schulz in the primary, again expressed his disgust for Cox on Thursday, declaring, “We’re going to lose this seat … We don’t even have a campaign now.”

John Ganz: “Peter Thiel is a fascist. There’s really no better word for what he is. For some reason, people have a lot of trouble grasping this or just coming out and saying it.”

TEXAS GOVERNOR. “One of the deadliest school shootings in U.S. history. The revival of a 1920s ban on abortion. The country’s worst episode of migrant death in recent memory. And an electrical grid, which failed during bitter cold, now straining under soaring heat,” the New York Times reports.

“The unrelenting succession of death and difficulty facing Texans over the last two months has soured them on the direction of the state, hurting Gov. Greg Abbott and making the race for governor perhaps the most competitive since Democrats last held that office in the 1990s.”

NEW YORK GOVERNOR. A man wielding a small weapon attacked Republican Rep. Lee Zeldin at a campaign stop near Rochester on Thursday but was quickly subdued by Zeldin and other event-goers. Zeldin was not injured and continued speaking after police apprehended the attacker, identified as David Jakubonis, who was charged with attempted assault, a felony.

NEVADA GOVERNOR. Republican Joe Lombardo has dropped an internal from The Tarrance Group that finds him trailing Democratic incumbent Steve Sisolak by a tight 46-44 margin.

MICHIGAN GOVERNOR. Wealthy businessman Kevin Rinke recently ran a commercial arguing that conservative radio host Tudor Dixon is “endorsed by the RINO establishment’s leading never-Trumpers,” and she’s responded with her own spot showing old footage of Trump praising her as “fantastic, brilliant, Tudor Dixon.” NBC reported Friday that Dixon had only spent a mere $26,000 on ads for the Aug. 2 GOP primary compared to $4.3 million for Rinke, though a pro-Dixon group called Michigan Families United has deployed $1.5 million.

WISCONSIN U.S. SENATOR. State Treasurer Sarah Godlewski, whom the Milwaukee Journal Sentinel says hadn’t run any TV ads for eight of the last nine weeks, has launched what her campaign says is a seven-figure buy ahead of the Aug. 9 Democratic primary. The spot features a clip from a recent debate where Godlewski, who is the only woman in the contest, tells her opponents, “Guys, I’m glad that now that Roe is overturned, you are all now sharing your own personal stories. But I was the only one talking about reproductive rights because for me, this is not an afterthought.”

That reticence may have something to do with the fact that Schatz, the president pro tem of the state Senate, has run a total failure of a campaign. Despite pouring $2 million of his own money into the race (he runs a family business that lays telecommunication cables), his best showing in any poll has found him with all of 4% of the vote.

Schatz simply appears to be out of step with today’s Republican voters. “They’re not looking for someone to continue to set things on fire and increase the rhetoric and say all the red meat issues,” he recently told the Missouri Independent. “They want a common sense person that obviously solves things and is results over rhetoric.” Primary after primary has shown us this simply isn’t so, despite what Schatz might want to believe.

IOWA U.S. SENATOR, GOVERNOR, ATTORNEY GENERAL, 1ST, 2ND, and 3RD CDs. Cygnal has released a survey of Iowa’s major statewide races, conducted for the conservative group Iowans for Tax Relief. The firm shows GOP Sen. Chuck Grassley turning back Democrat Mike Franken 52-43, which would be an intimidating margin for just about any senator but would actually be the incumbent’s smallest margin of victory by far since his initial 1980 victory. Republican Gov. Kim Reynolds, meanwhile, holds a wider 56-41 edge against Democrat Deidre DeJear.

An early July Franken internal for Change Research put the Republican ahead 49-44, while more recent numbers from Selzer & Company on behalf of two media organizations showed him with a 47-39 advantage; pollster Ann Selzer called it Grassley’s “weakest showing since 1980,” when he was first elected to the Senate. (Selzer’s gubernatorial numbers, by contrast, had Reynolds up 48-31 against DeJear, who was the Democratic 2018 nominee for secretary of state.)

Cygnal, though, is the only outfit that’s publicized numbers for the race for attorney general so far, finding Democratic incumbent Tom Miller with a tiny 45-44 edge over Guthrie County Attorney Brenna Bird, a Republican who previously worked as chief counsel to then-Gov. Terry Branstad, in his bid for a record 11th term. That’s actually an improvement for Miller, though, from his 46-41 deficit in Cygnal’s February survey.

Hawkeye State Democrats, meanwhile, have shared surveys showing them in competitive positions against two different freshmen Republican congresswomen. In southeastern Iowa’s 1st District, Change Research gives GOP Rep. Mariannette Miller-Meeks a 39-38 edge over state Rep. Christina Bohannan. (The local NBC affiliate says that this survey was part of the statewide poll conducted for Franken earlier this month, though Bohannan was the one who released it.) Bohannan’s allies at 314 Action dropped their own numbers back in April that also had Miller-Meeks ahead by just a single point, 43-42, in a seat Trump would have taken 50-48, but we haven’t seen any other polls in the intervening time.

Over to the north in the neighboring 2nd District, Public Policy Polling’s survey for Democratic state Sen. Liz Mathis finds her deadlocked 44-44 with incumbent Ashley Hinson. A February PPP poll for Mathis had Hinson up 43-42, and we also haven’t seen any other numbers since then; Trump would have won 51-47 here.

In the 3rd District we have a poll from Moore Information Group for Republican state Rep. Zach Nunn and the NRCC that had him tied 43-43 with Rep. Cindy Axne, who is currently the state’s only Democratic member of Congress.

Politico: “A growing legion of conservatives see DeSantis as what’s next in the party. Yet Trump’s popularity was clear on Saturday night when he spoke to thousands of young conservatives in Tampa and suggested he’s running for president.”

Said Trump: “If I announced I was not going to run for office, the persecution of Donald Trump would immediately stop. But that’s what they want me to do. And you know what? There’s no chance I do that…”

A new Des Moines Register poll finds a majority of Iowans — 60% — say abortion should be legal in most or all cases. The 60% support for legal abortion is a new high-water mark in the Iowa Poll.

A new Impact Research poll finds that just 24% of voters are aware that President Biden’s infrastructure bill passed Congress and was signed into law.  An astonishing 76% think the bill never passed Congress or don’t know whether it passed or not.  Democrats have a real problem communicating their successes in governing.