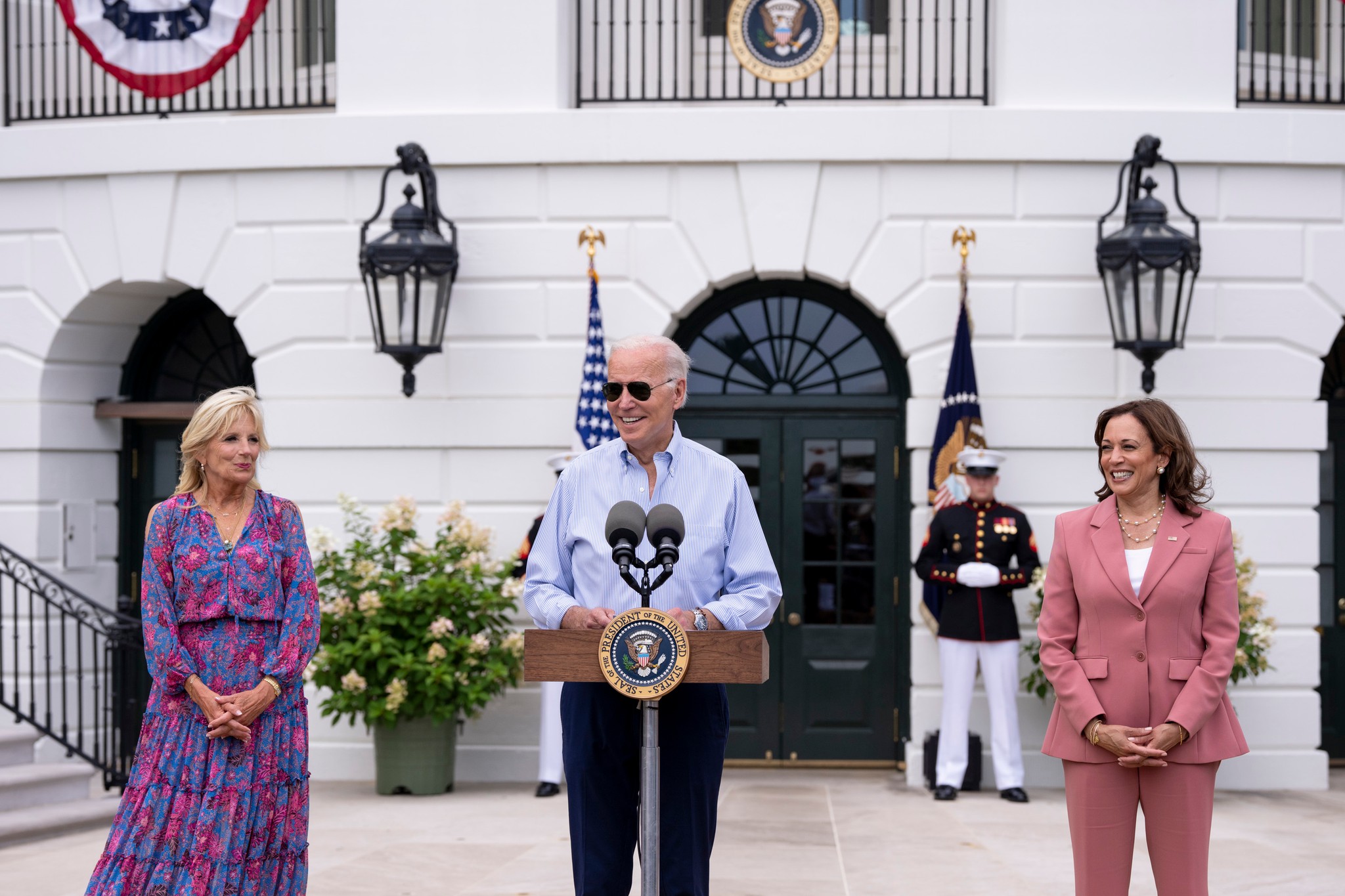 Gallup: “Americans’ confidence in two facets of the news media — newspapers and television news — has fallen to all-time low points.”

“Just 16% of U.S. adults now say they have ‘a great deal’ or ‘quite a lot’ of confidence in newspapers and 11% in television news. Both readings are down five percentage points since last year.”

A new CNN poll finds that 67% of voters say that Democratic candidates for Congress in the area where they live aren’t paying enough attention to the country’s most important problems, with just 31% saying that these candidates have the right priorities.

A similar 65% say that Republican candidates in their area aren’t paying enough attention to important national problems, with 33% saying that GOP congressional candidates have the right priorities.

NEVADA REFERENDUM. Nevada election officials confirmed this week that supporters of a proposed constitutional amendment to institute America’s first-ever top-five primary system had turned in enough signatures to qualify for the November ballot.

However, because this is a voter-initiated amendment, a win for the “yes” side wouldn’t be the end of the fight at all. The Silver State requires these types of constitutional initiatives to be approved in two successive general elections, so top-five advocates would need to prevail again in 2024 in order to implement the system for the 2026 elections. (Amendments placed on the ballot by the legislature only need to be passed by voters once.)

Nevada, like most states, holds partisan primaries for statewide, legislative, and congressional offices, and it takes just a plurality to win both the nomination and the general election. Under the top-five system, though, all candidates running for these posts would face off in a single primary, regardless of party, and the five candidates with the most votes would move on to a general election that would be decided through instant-runoff voting. In 2020, Alaska voted to adopt a very similar system, though it caps the number of general election candidates at four. (Alaska’s new system, unlike what the Nevada initiative proposes, also institutes ranked-choice voting in general elections for president.)

Top-five advocates have pointed to the number of primaries in the state that have seen the winner take far less than a majority of the vote to make their case that change is needed. Last month, for instance, Army veteran Mark Robertson won the Republican primary to take on Democratic Rep. Dina Titus with just 30% of the vote, while Clark County Sheriff Joe Lombardo earned 38% to secure the GOP nod to face Democratic Gov. Steve Sisolak, though results like these are common across the country.

However, while progressives have often been at the forefront of efforts to promote instant-runoff voting, the state’s most prominent Democrats have all come out against the top-five system. Sisolak dismissed the measure earlier this year as “a rushed constitutional change that would make our system more confusing, error-prone and exclusionary,” while Sens. Catherine Cortez Masto and Jacky Rosen are also urging a “no” vote, as is the state AFL-CIO.

Sondra Cosgrove, who heads the main group promoting the top-five, pushed back by pointing out that Nevada Democrats allowed anyone casting a ballot early in the state’s 2020 presidential caucus to rank their preferences, asking, “It was good enough for them then but not now?” Republicans have been quieter about their position on the measure, though the GOP has usually been hostile to efforts like this in other states.

ALASKA U.S. SENATOR. Alaskans For L.I.S.A. is out with a new commercial taking former state cabinet official Kelly Tshibaka to task for twice violating the state’s fishing license laws, a topic that earned the Republican some unwelcome headlines last year after she launched her intra-party bid against Sen. Lisa Murkowski. The super PAC so far has deployed $2.4 million, which makes it responsible for almost all of the outside spending in this race.

A pair of men, who identify themselves as a commercial fisherman and a sportfishing guide, tell the audience, “Kelly Tshibaka illegally claimed to qualify for a resident fishing license, but she got caught. She was also cited for commercial fishing illegally.” The duo continues, “We take our commercial fishing laws very seriously. She said she didn’t understand the rules, but she’s a Harvard lawyer.” The cast concludes that Tshibaka knew the state’s rules but charge that she “just doesn’t think they apply to her.”

In October, the Alaska Department of Public Safety fined Tshibaka $270 for “commercial fishing without a commercial fishing crew license” following the release of a campaign video that showed her retrieving fish from a net and selling them to a tender boat. Officials declined to charge Tshibaka over a separate 2019 incident in which she obtained a sportfishing license reserved only for those who’ve lived in the state for at least 12 months; Tshibaka, who left Alaska at age 15, had only recently returned from living in Maryland and did not meet those requirements at the time.

UTAH U.S. SENATOR. Dan Jones & Associates’ newest survey for the Deseret News and University of Utah shows Republican incumbent Mike Lee edging out conservative independent Evan McMullin 41-36, which is similar to the firm’s earlier findings, following Democrats’ decision to support McMullin at their April convention rather than field their own nominee. This latest poll also shows that unnamed “other” candidates obtain 14% of the vote; two third-party contenders, Independent American Party nominee Tommy Williams and Libertarian Jimmy Hansen, will be on the ballot along with Lee and McMullin, though they’ve attracted little attention.

GEORGIA GOVERNOR. Republican Gov. Brian Kemp has publicized numbers from Cygnal that give him a 50-45 lead over Democrat Stacey Abrams in a contest where recent polls have disagreed quite a bit on the state of the race. Quinnipiac University in late June showed a 48-48 tie, but the Democratic firm Data for Progress followed up days later with numbers giving the incumbent a 53-44 edge. An AARP survey from a bipartisan team of pollsters, by contrast, had Kemp up 52-45, which is similar to what the governor’s internal shows now.

Cygnal’s memo, unsurprisingly, argues that Kemp is in a strong position to prevail, but his lead pollster didn’t sound so comfortable in an interview with NBC. “This is going to be a close race,” warned Brent Buchanan, adding, “Georgia is changing. Stacey Abrams has a crap-ton of money.” There’s no disputing that last bit, as Abrams and her allied leadership committee ended June with an $18.5 million to $7 million cash-on-hand edge over Kemp’s side.

Abrams is also making use of that “crap-ton of money” to run a new commercial attacking Kemp for signing “the most extreme abortion law in the nation.” The ad, which began airing a day after a federal court allowed that legislation—which bans most abortions—to go into effect, features various reporters describing how the bill could “put their lives in danger,” “make women criminally liable,” and set off “criminal investigations into miscarriage.” It concludes by warning that Kemp wants to “ban abortion for any reason without exception for rape and incest.”

Cook Political Report: “Our ratings change doesn’t indicate that we don’t believe this race will be close. It most certainly will, and abortion could tighten it. But when we look at the overall environment boosting Republicans, the headwinds Democrats face, and Kemp’s continued strong numbers in Democratic and bipartisan polls, it has become clear that Kemp now holds an edge in the contest. As such, we are shifting our rating from Toss Up to Lean Republican.”

MICHIGAN GOVERNOR. The Glengariff Group’s newest poll for The Detroit News and WDIV-TV shows conservative radio host Tudor Dixon edging out businessman Kevin Rinke 19-15 ahead of the Aug. 2 Republican primary; real estate broker Ryan Kelley and chiropractor Garrett Soldano are just behind with 13% and 12%, respectively, while a 38% plurality is undecided. It does not appear that respondents were offered the opportunity to volunteer the name of James Craig, the former Detroit Police chief who is running a write-in campaign after getting booted off the ballot.

RHODE ISLAND GOVERNOR. Incumbent Dan McKee is spending $65,000 on his opening buy for the September Democratic primary, and it’s one of the rare campaign ads that proudly highlights that the candidate lives with his mother.

The governor begins by telling the audience, “Ever since Mom moved back in, we play cards,” to which 94-year-old Willa McKee, who is shown sporting a hefty pair of sunglasses, responds, “I even let him win sometimes.” The candidate goes on to tout his accomplishments (which are shown in card form), including “one of the nation’s best economic recoveries” and ending the car tax, before concluding, “Not bad for a year and a half.” Willa McKee gets the last word, replying, “Not bad for a governor that lives with his mother.”

WISCONSIN GOVERNOR. New campaign finance reports are in covering the first six months of the year, and they demonstrate just how much businessman Tim Michels has been using his personal wealth to outspend the one-time frontrunner, former Lt. Gov. Rebecca Kleefisch, ahead of their Aug. 9 Republican primary.

Michels, who entered the race in April, supplied all but $60,000 of the nearly $8 million he brought in, while Kleefisch raised $3.7 million. Michels outspent her by a wide $7.7 million to $3.5 million during this time, and while Kleefisch finished June with a $2.7 million to $320,000 cash-on-hand lead, Michels likely can write his campaign more checks. The only other notable GOP candidate, state Rep. Timothy Ramthun, brought in a mere $170,000 and had $90,000 on hand. The eventual winner will face Democratic Gov. Tony Evers, who raised $10 million from January to June and had $7.7 million on hand.

TEXAS GOVERNOR. Democrat Beto O’Rourke was unable to upload his latest fundraising report to the Texas Ethics Commission’s website because of its sheer size, but the TEC says he finished June 30 with $23.9 million on hand. The challenger outraised Republican Gov. Greg Abbott $27.6 million to $24.9 million from Feb. 20 through June 30, but Abbott held a larger $45.7 million war chest.

“Mallory McMorrow, the state senator whose fiery April floor speech denouncing Republicans’ treatment of the LGBTQ community as a ‘hollow, hateful scheme’ made her an instant political celebrity on the left, has raised more than $1 million on behalf of her fellow Michigan Democrats,” the New York Times reports.

“So far, the effort prevailed in just one of six races, underscoring the challenges in pulling a party still in thrall to Donald Trump’s political brand away from the fringe.”