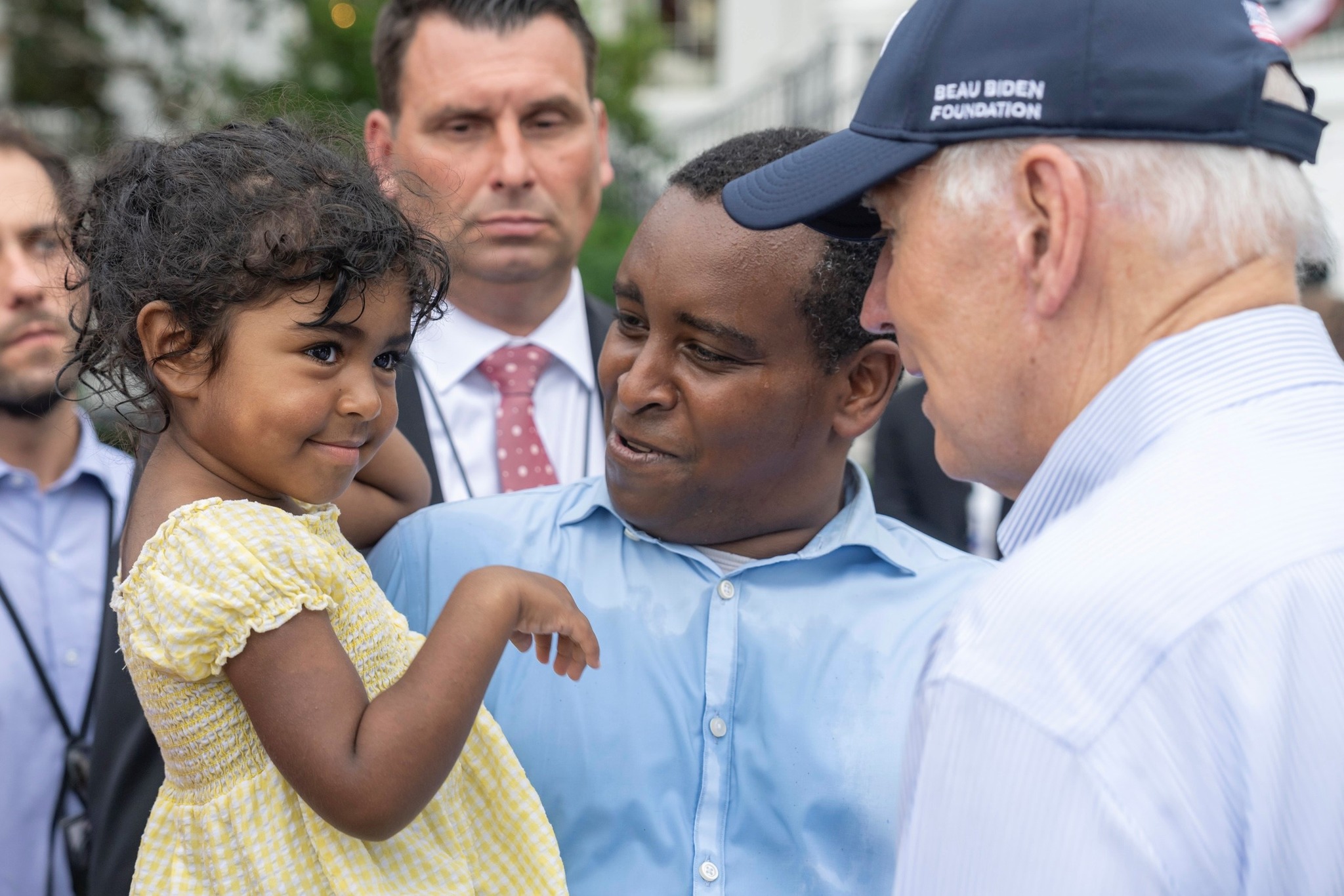 Stuart Rothenberg: “I’ve seen more than a few election cycles, but I’m not certain I have seen many that are more confusing than the one we are now in…”

“It has been relatively easy to handicap individual races and entire election cycles when nothing out of the ordinary happens. In those cases, the old rules still apply. But it’s more difficult to sketch out the trajectory of an election when outlandish events occur — and outlandish events seem to have occurred each day since Donald Trump announced he was running for president in 2016…”

“Yes, I know what the old rules of thumb say is going to happen in the 2022 midterms. And I haven’t given up entirely on those old rules. But we live in such a crazy time that I have no idea where the country is headed.”

“A central reason for that is that Democrats are more likely to say they plan to vote for Democrats in November than they are to say they approve of Biden. Polling from YouGov shows that in 2018 and 2020, the gap in Republican approval for Donald Trump was on average about 2.5 to three points away from Republican support for Republicans on the generic ballot. YouGov had a methodological error in polls this summer that means there’s no generic-ballot data, but the past two polls have shown an average gap of around 12 points between Democratic support for Democrats and Democratic approval of Biden.”

“They remain competitive on the generic congressional ballot, and some key GOP Senate candidates are underperforming the fundamentals in their states.”

“Another sign suggesting that Democrats’ prospects aren’t overly bleak: fundraising. Despite the GOP’s apparent momentum in the midterms, Democratic Senate candidates as a whole are far outpacing Republicans in many key races when it comes to campaign money, as we learned last week.”

A new Emerson College poll finds Democrats have closed a nine-point Republican lead in the generic ballot down to a single point, trailing 45% to 44%.

Said pollster Spencer Kimball: “Those who say abortion is the top issue facing the nation are more motivated to vote this November than any other issue.”

A new CNN/SSRS poll finds Democrats and Republicans tied on the generic congressional ballot at 46% each.

Vice President Kamala Harris and Govs. Gavin Newsom and Jared Polis are among a group of Democrats who are making moves their associates say appear to be steps to prepare for a White House run if Joe Biden opts not to seek a second term, CNBC reports.

Washington Post: “Biden was motivated to run for office in large part because he saw himself as best positioned to defeat Donald Trump. He still considers knocking Trump out of the White House one of his major contributions to America’s welfare. And with Trump looming as the potential Republican nominee — he’s eyeing a September announcement — Biden maintains that he is still best positioned to beat him.”

“Biden may seek reelection in any case, people in his inner circle say, but if Trump runs, Biden is far more likely to do so. And if Trump holds off, it will be far easier for other Democrats to approach Biden about letting someone else take on a younger Republican nominee.”

The Atlantic: 20 reader ideas for who could replace Biden.

Philip Bump: “After all, while polling is again both sparse and premature, there is good reason to think that President Biden’s best chance to be reelected is to face Donald Trump again in 2024. Polling released last week showed that most Democrats don’t want Biden to run again… but that Biden nonetheless maintains a slight (nonsignificant) edge over Trump in general-election polling.”

“In a recent interview, Biden said he would ‘not be disappointed‘ should he win the party’s nomination and then have to run against Trump again.”

Retiring Rep. Chris Jacobs (R-NY) told the Buffalo News that former President Donald Trump “lost his mind” between Election Day 2020 and Jan. 6, 2021, called on the Republican Party to choose someone else as its presidential nominee in 2024.  Said Jacobs: “I think it would be best for the party if we embrace the new generation of leadership.”

Podcaster Joe Rogan called Donald Trump a “man baby” and laughed at Trump’s inability to focus on anything but himself, the Daily Beast reports. Said Rogan: “He’s a fucking toddler.”   Max Boot: Is Trump finally becoming a serious candidate? You’ve got to be kidding.

Senate Minority Leader Mitch McConnell (R-KY) says former President Trump will face a lot of competition in a Republican primary if he runs for president in 2024, The Hill reports.

Said McConnell: “I think we’re going to have a crowded field for president. I assume most of that will unfold later and people will be picking their candidates in a crowded primary field.”

“A growing number of Republicans are openly cheering for a competitive primary field in 2024 and encouraging candidates to jump into the race, as some in the GOP get increasingly anxious about the idea of Donald Trump becoming their presidential nominee again – especially amid damning revelations about his actions during the January 6, 2021, insurrection,” CNN reports.

But then again… “Congressional Republican leaders have no apparent plans to keep Donald Trump from a third presidential run. Some are even encouraging it,” Politico reports.

“Many are prepared to adopt the same playbook they did in 2016: Allow a crowded presidential primary field to sort itself out with minimal interference.”

While making a campaign speech Thursday night, Rep. Lee Zeldin (R-NY) “was attacked by a disgruntled man in the crowd,” WHEC reports.

“After a brief tussle, members of the audience took matters into their own hands—by disarming and apprehending the attacker with zip-ties pulled from campaign posters.”

“Democrats are on defense across the country in this year’s midterm elections but appear to believe some of their best chances for flipping GOP congressional districts are in California,” the Los Angeles Times reports.  “Five of six candidates added to their ‘Red to Blue’ program on Monday are in this state.”

“The Democratic Party is undertaking some wholly understandable and worthwhile soul-searching when it comes to its growing efforts to meddle in Republican primaries,” the Washington Post reports.

“Democrats are in one breath arguing that Trump-supporting election deniers are extremely dangerous to democracy — and in the next breath, trying to get them on the November ballot. The idea is to get weaker opponents in the general election; the practical effect could be helping these supposedly very dangerous Republicans win powerful offices if things don’t go exactly according to plan.”

“There’s no question that this could go sideways. And there’s no question it undercuts Democrats’ argument that these candidates are truly dangerous. But as for how much it has backfired in the past, that’s less clear.“

New York Times: “While Black voters remain overwhelmingly allied with the Democratic Party, some, especially older churchgoers, have a conservative streak when it comes to social issues like abortion.”

“The best way to communicate to those members of her community, Ms. Smith-Pollard and other faith leaders said not long before the court ruled to eliminate the constitutional right to abortion, would be to frame the response as not just a matter of abortion, but rather as part of a broader movement to restrict individual rights, including voting, marriage and control over one’s own body.”

Detroit News poll: “Republican primary voters surveyed in last week’s poll were told Republican leaders in the state Senate conducted an investigation into claims of fraud in the 2020 election and found there was no evidence of widespread fraud.”

“Those surveyed then were asked who they believed: Republican leaders in the state Senate or Trump’s insistence there was widespread fraud in the 2020 election.”

“Respondents chose Trump’s claims over the state Senate’s by a margin of 59% to 26%.”

“The Jan. 6 select committee hearings have riveted many in Washington over the summer, but their political impact on key races around the U.S. appears to be limited,” NPR reports.  “House Democrats on the front lines of fighting off a red wave in November’s midterm elections say voters are paying attention to new details about the Capitol attack that have emerged in the hearings — but they say the economy, not the probe into a possible threat to democracy, remains the leading issue.”

“Professional Democrats have many fears about the 2022 midterm elections that keep them up at night,” the New York Times reports.

“Chief among them: losing Congress and handing over investigative powers and the ability to set the Washington agenda to Kevin McCarthy and Mitch McConnell. Granting Republicans full control over states where abortion remains contested. Seeing President Biden turned prematurely into a lame duck.”

“Somewhere near the top of that list is the concern that voters will elect Donald Trump’s preferred candidates to the office of secretary of state, a job that in many states plays a critical role in safeguarding the right to vote, while also ensuring the smooth operation and fairness of the electoral system.”

“To put it plainly, the widespread worry on the left is that Trump’s loyalists will guarantee his re-election in 2024 if they take power in 2022. It’s not something either Trump or these candidates labor especially hard to rebut.”

“Colorado’s secretary of state’s office on Wednesday said it has told two candidates who lost their Republican primary races last month that it will not conduct a recount of those races because they failed to pay the required amount by the deadline,” the AP reports.

“The office informed Mesa County Clerk Tina Peters, who lost her race for the GOP nomination for secretary of state, and state Rep. Ron Hanks, who fell short in his bid for the party’s U.S. Senate nomination, that it was moving forward finalizing the results of the primary.”

NBC News: “Wherever he goes, Pence urges support for conservative candidates running in the midterm elections, often by highlighting their anti-abortion credentials. But he’s also considering a presidential run of his own and his shadow campaign is well underway, fueled by a long conservative record that often diverges from Trump’s.”

“Pence made the barest mention of Trump in his appearance at the church here: a passing reference to the ‘Trump-Pence’ administration’s anti-abortion policies.”

“Now that Roe v. Wade is overturned, he said, states hold great sway over whether abortion is legal. He urged a nationwide ban on the practice — something that requires ‘a movement in every state in the country.’”

“Senate Democrats’ campaign arm outraised its Republican counterpart in the second quarter of 2022 amid a fierce battle for control of the upper chamber, which is split 50-50,” ABC News reports.

CNN reports Republican operatives working on a series of Senate races “appear more dour of late, with some admitting their candidates have yet to take advantage of the helpful environment, allowing their Democratic opponents to stand out, raise money and prepare.”

Cook Political Report: “Republicans continue to benefit from an electoral map tilted in their favor on nearly all levels.”

“In fact, when looking exclusively at the Electoral College map, Republicans are enjoying a stronger advantage than at any point in the 25-year history of the Cook PVI.”