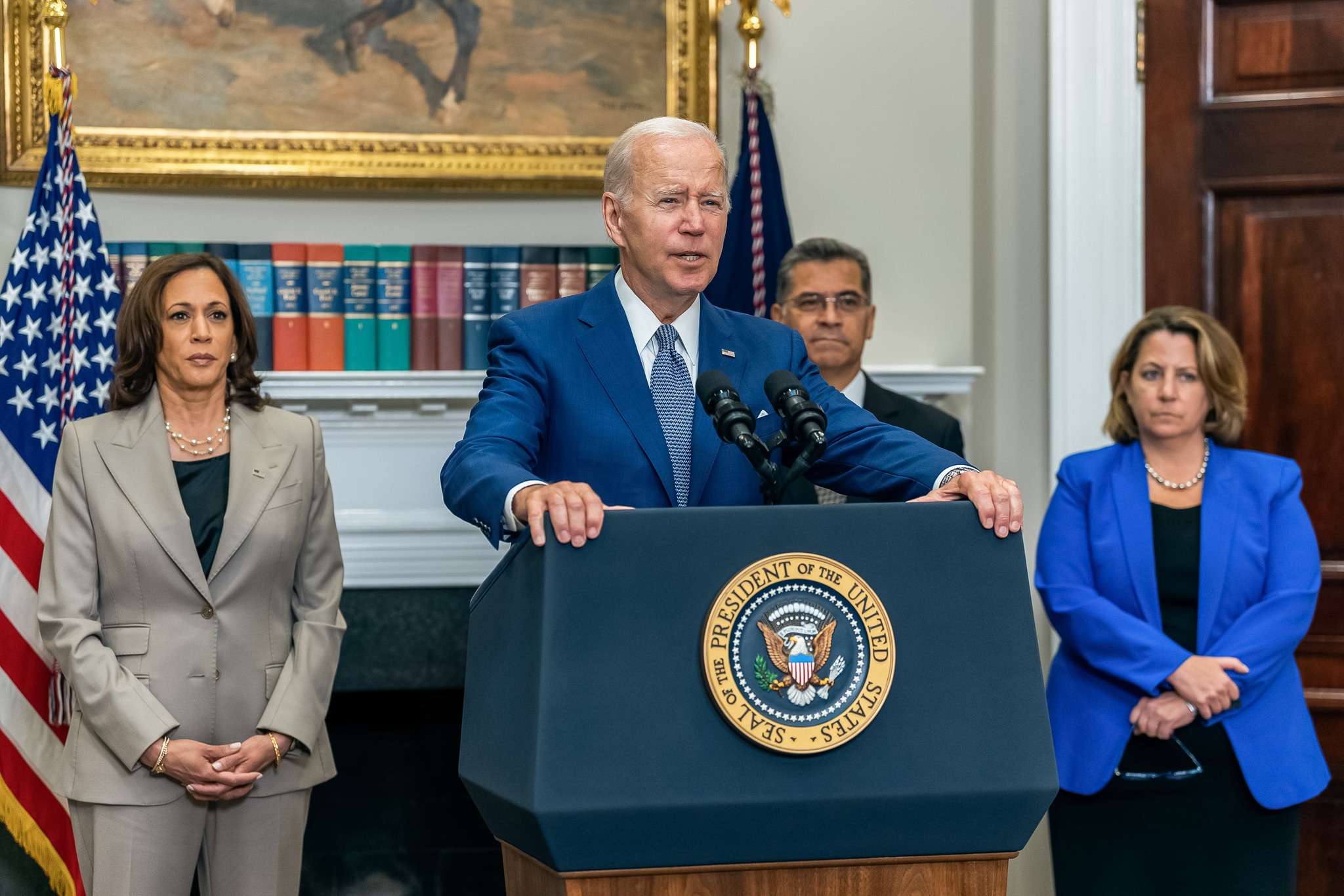 A new CNN poll finds the summer of 2022 is a season of deepening and widespread discontent.

“The survey finds the public’s outlook on the state of the country the worst it’s been since 2009, while its view on the economy is the worst since 2011. And nearly 7 in 10 say President Joe Biden hasn’t paid enough attention to the nation’s most pressing problems.”

“Biden’s approval rating in the poll stands at 38%, with 62% disapproving. His approval ratings for handling the economy (30%) and inflation (25%) are notably lower. Rising costs are a primary economic pressure for most Americans: 75% call inflation and the cost of living the most important economic problem facing their family.”

MARYLAND ATTORNEY GENERAL. Michael Peroutka (R), who is running for Maryland Attorney General, “believes public education is a communist plot, abortion and gay marriage violate God’s law, and the concept of separation of church and state is a ‘great lie,’” Vice News reports.

“His views are extreme even for the modern Republican Party, and once would be considered disqualifying for any major party nominee for statewide office. But his emergence as a serious candidate shows just how far the door has been thrown open to extremism in the Republican Party. The GOP base’s embrace of election falsehoods and anti-science COVID-19 conspiracy theories, and flirtation with white supremacist rhetoric has given once- fringe figures like Peroutka an opening to push into the political mainstream.”

“To be clear, Peroutka has not changed. But the party base that’s embracing him has.”

Peroutka was a board member for the neo-Confederate League of the South until 2014, believes public education is “the 10th plank in the Communist Manifesto,” and at one point he declared that he was “still angry” that Maryland wasn’t allowed to secede from the union during the Civil War.

But don’t go calling Peroutka a neo-Confederate; there’s nothing “neo” about it, thank you very much! “If anything, I want to be just a true Confederate,” he said in 2014.

Even to this day, Peroutka won’t say whether he supports the South seceding from the union, telling Vice only that he has “no comment” on the issue and that it’s up to the Southern states “to self-determine.”

Peroutka’s beaten his establishment-backed primary rival, Jim Shalleck, in fundraising. The former has raised about $50,000 (including a $10,000 loan to himself), the latter a measly $10,000.

ARIZONA U.S. SENATOR. Wealthy businessman Jim Lamon tries to make the case that Republican primary voters should choose him on Aug. 2 over Trump-backed Blake Masters with a new ad where Trump fans lament how even their hero “endorsed Mitt Romney.” The cast continues, “Trump made a mistake in Arizona. Fake Blake Masters is owned by California big tech.” The Club for Growth tried this very same messaging strategy in the Ohio Senate race only to see their man, Josh Mandel, lose to Trump’s pick, J.D. Vance. (The Club and Trump are on the same side in Arizona.)

IOWA U.S. SENATOR and GOVERNOR. Selzer & Company’s new survey for the Des Moines Register and Mediacom shows Republican Sen. Chuck Grassley leading Democrat Mike Franken 47-39, which longtime pollster J. Ann Selzer says is the incumbent’s “weakest showing” since he was first elected in 1980. This is Selzer’s first look at this general election contest, though Franken recently released his own internal from Change Research that found Grassley ahead by a slightly smaller 49-44 spread.

Selzer also takes a look at the race for governor and finds Republican incumbent Kim Reynolds beating Democrat Deidre DeJear 48-31, which is a big shift in the governor’s favor from her 51-42 advantage in early March.

ARIZONA GOVERNOR. “Arizona Gov. Doug Ducey (R) has already helped block one of former President Donald Trump’s allies from winning the Republican nomination for governor in a crucial battleground state. Now he’s hoping for a repeat in his own backyard,” the AP reports.

“Ducey is part of a burgeoning effort among establishment Republicans to lift up little-known housing developer Karrin Taylor Robson against former television news anchor Kari Lake, who is backed by Trump. Other prominent Republicans, including former New Jersey Gov. Chris Christie, have also lined up behind Robson in recent days.”

Robson used the last few months to utterly demolish her Trump-backed primary rival, former TV news anchor Kari Lake, in spending, but new campaign finance reports reveal just how massive that gulf is. Taylor Robson deployed $10.4 million from April to June, which the Arizona Republic notes is about how much the RGA has reserved in general election TV time. (The RGA is run by termed-out Gov. Doug Ducey, who is supporting Taylor Robson in the Aug. 2 primary.) Most of this money came from Taylor Robson, who self-funded $9.4 million of the $10.1 million she brought in.

Lake, by contrast, raised $1.1 million and spent $1.4 million during these three months. And while Lake ended June with a $400,000 to $90,000 cash-on-hand lead, there’s little reason to think that the wealthy Taylor Robson will allow herself to get outpaced during the final weeks. Lake, though, has still maintained her lead in recent polls despite her rival’s spending spree.

HAWAII GOVERNOR. While former Lt. Gov. Duke Aiona arguably remains the frontrunner in the Aug. 13 Republican primary thanks to name recognition, the 2010/2014 nominee’s last-minute entry left him almost no time to rake in cash. Aiona, who unexpectedly filed to run just before filing closed on June 7, brought in $24,000 for the remainder of the month, and he records spending all of 85 cents during that period. (Civil Beat says this expenditure was for bank charges.)

Aiona, though, still ended June with more cash-on-hand than all but one of his intra-party rivals. B.J. Penn, a former Ultimate Fighting Championship champion who has been partially self-funding, led with $140,000 on hand. Contractor Gary Cordery, who we hadn’t previously mentioned, had $20,000 available after spending most of the $210,000 he brought in during the past six months, while Honolulu City Councilwoman Heidi Tsuneyoshi had a similar amount in her war chest.

On the Democratic side, Lt. Gov. Josh Green continued to far outpace his rivals:

Kahele kicked off his campaign in May by announcing that he wouldn’t accept contributions over $100 in an effort to qualify for public financing, but state officials later said he couldn’t obtain matching funds because he failed to file an affidavit committing to following the program’s spending limits.

NEW YORK GOVERNOR. Democratic Gov. Kathy Hochul ended June with a massive $11.7 million to $1.6 million cash-on-hand lead over Republican Lee Zeldin, who like the incumbent had to get past several notable opponents to win his June 28 primary.

TEXAS GOVERNOR. Democrat Beto O’Rourke outraised Republican Gov. Greg Abbott $27.6 million to $24.9 million from Feb. 20 through June 30. Abbott ended last month with a $45.7 million war chest, but O’Rourke’s cash-on-hand figure was unavailable as of late Monday: The general counsel for the Texas Ethics Commission confirmed that the Democrat had submitted the information before the deadline passed the previous week, but that “the size of the report is pushing the limits of our technology.” O’Rourke, though, had only $6.8 million on hand in February, so there’s no question the incumbent remains well ahead in the money race.

NEW HAMPSHIRE U.S. SENATOR. “Sen. Maggie Hassan (D-NH) was initially seen as one of the most vulnerable Senate Democrats up for re-election this year. But as New Hampshire’s Sept. 13 primary draws closer, there’s still no clear Republican frontrunner to take her on in November,” Axios reports.

“The GOP establishment’s failure to coalesce around one viable candidate after its initial favorite — New Hampshire’s current Gov. Chris Sununu — decided not to enter the race has helped clear the way for Democratic incumbent.”

GEORGIA U.S. SENATOR. A video from 2019 shows Georgia U.S. Senate candidate Herschel Walker (R) falsely claiming that he was an FBI agent. He then told a story about grabbing a gun with the intent to kill someone.  At the same event, Walker said his “favorite game” was Russian Roulette.

PENNSYLVANIA GOVERNOR. Politico: “In the immediate aftermath of Pennsylvania’s messy gubernatorial primary — which included an ill-fated, last-minute attempt by the GOP establishment to stop Mastriano — many Democrats and Republicans in Pennsylvania thought the race was all but over. Attorney General Josh Shapiro, the Democratic nominee, is a first-class fundraiser with a record of winning tough statewide races. He emerged unscathed from the Democratic primary after clearing the field.”

“Mastriano, on the other hand, has a shoestring campaign, regularly antagonizes members of his own party, and is known for his far-right views on hot-button issues. He chartered buses to the U.S. Capitol on Jan. 6, where he appears to have been part of a crowd that crossed barricades. He believes in no exceptions for an abortion ban. He has said that the state legislature has the power to appoint presidential electors, and as governor, he would have the power to ‘decertify’ election machines. When Mastriano pulled out a win in the primary, many national Republicans kept their distance and, privately, assumed Shapiro would waltz to the governor’s mansion.”

“But as the political environment has worsened for Democrats across the country, the gubernatorial race in Pennsylvania has begun to look more competitive than either party expected.”

“Those results are based on a model in which 13% of the primary’s voters are Democrats (Wyoming allows party-switchers to vote in primaries). The poll tested two other scenarios, where Democrats are 20% or 25% of the electorate, and Hageman still leads Cheney by 18 percentage points and 12 points, respectively.”

TEXAS 13TH CD. In the latest addition to videos of GOP lawmakers grandstanding with guns, Rep. Ronny Jackson (R-TX) dared the Biden administration to take away his two assault rifles — one of which was aimed at his own foot.

Daily Beast: “Social media users reacted to Jackson’s show of force with both dismay and amusement, with some pointing out the dangerous way he was holding his rifles, at least one of which appeared to be loaded.”

MARYLAND U.S. SENATOR. Ryan Dark White (R), who is running for U.S. Senate in Maryland under the alias Jon McGreevey, was arrested on charges of making a false report of child trafficking, the Baltimore Sun reports.

White, an employee at an adult bookstore, falsely reported in April that a young girl was being trafficked by a man at the bookstore and forced to perform sex acts on male customers.