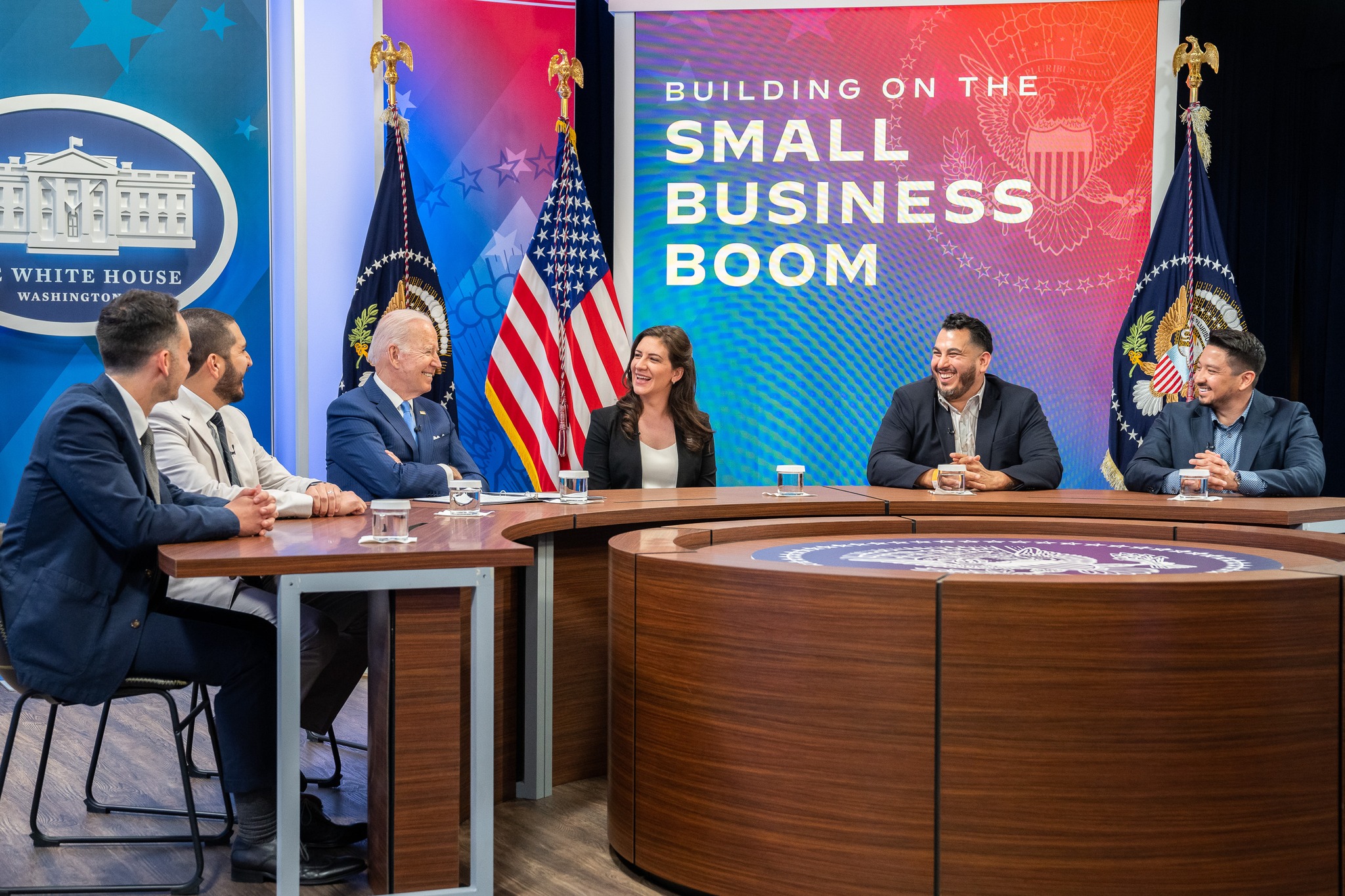 An Axios Engagious/Schlesinger focus group found that 10 of 14 Wisconsin swing voters last week said Trump should be prosecuted for trying to overturn the 2020 election and his role in the attack on the Capitol.

The survey, conducted by YouGov for the University of Houston, finds Hidalgo edging out Republican Alexandra del Moral Mealer just 46-44 among registered voters, though the same sample sees Democrat Beto O’Rourke prevailing by a larger 48-40 margin in his race to unseat Republican Gov. Greg Abbott. Joe Biden carried Harris County, which is home to most of the city of Houston and many of its suburbs, 56-43, the best performance for a Democratic presidential nominee since Lyndon Johnson in 1964.

Four years ago, Hidalgo made history at the age of 27 when she unseated Republican County Judge Ed Emmett in a 50-48 squeaker. (In Texas, county judges are executive rather than judicial posts). Hidalgo, who was born in Colombia and came to Texas as a teenager, became both the first woman and Latina to hold this office, as well as the first Democrat to do so since 1974—a time when the Texas Democratic Party looked very different than it does today.

However, Hidalgo has had an especially difficult few months. District Attorney Kim Ogg, a fellow Democrat whom Hidalgo has clashed with repeatedly, indicted three of the judge’s top aides in April for allegedly directing an $11 million contract for a COVID vaccine outreach project to a preferred political consultant. Hidalgo’s legal team in turn has claimed that Ogg’s actions are politically and personally motivated, arguing, “Despite claiming to be a Democrat, Ogg has aligned herself with her former Republican colleagues in retaliation against Judge Hidalgo.”

The judge herself said in May that she’d “not seen anything to suggest that my team did anything but protect the people of Harris County.” Hidalgo has not been charged with any wrongdoing, but she also predicted on Twitter that month that Ogg would come after her. “I expect this political exercise to continue through Election Day,” Hidalgo wrote, continuing, “She’ll have me indicted. Or name a ‘special prosecutor’—an illusion of independence since those are still beholden to the DA.”

Republicans are hoping that Hidalgo’s woes and the national political climate will give a lift to Mealer, a first-time candidate who has largely focused her campaign on concerns about crime and corruption. Mealer may also benefit from the end of straight-ticket voting in Texas, which legislative Republicans voted to do away with in 2017 starting with the 2020 cycle. Emmet, who was counting on crossover support, himself blamed the delay for his surprise defeat, tweeting one day after the 2018 election, “Keeping the straight ticket option for 1 more election cycle turned out to be a disaster for all Republicans. With the long ballot, more than 75% of voters chose to vote straight ticket, and the Democrats outvoted Republicans by more than 100K.”

Hidalgo’s camp, meanwhile, is pointing to her record during four sometimes turbulent years in office to make her case for re-election. “Lina Hidalgo has successfully led Harris County through chemical fires, floods, the winter freeze and a global pandemic,” her campaign has said, “all while overhauling how the county tackles flooding and making record-breaking investments in fighting crime and tackling homelessness.”

NEW YORK 3RD CD. DNC member Robert Zimmerman has secured an endorsement from Rep. Grace Meng, who represents the neighboring 6th District, ahead of the Aug. 23 primary. Meng is arguably the most prominent Asian American elected official in the state, and her support could be an asset to Zimmerman in a constituency where about a quarter of the residents are also Asian American.

NEW YORK 17TH CD. Nita Lowey, who represented much of the Lower Hudson Valley from 1989 until her 2021 retirement, has endorsed her former colleague, Rep. Sean Patrick Maloney, in next month’s Democratic primary. Almost three-quarters of the new 17th’s denizens live within the boundaries of the seat Lowey held until last year, while Maloney currently represents most of the balance.

WASHINGTON 4TH CD. GOP Rep. Dan Newhouse is going negative ahead of the Aug. 2 top-two primary with a commercial that excoriates his Trump-endorsed intra-party opponent, 2020 gubernatorial nominee Loren Culp, as a “failed politician who’s “only in politics to make money.” The narrator continues, “Culp paid himself $33,000 from campaign funds, and personally expensed his campaign enough mileage to drive all the way around the Earth and then some.”

BALTIMORE COUNTY STATE’S ATTORNEY. Four-term incumbent Scott Shellenberger is on the receiving end of a massive amount of spending ahead of Tuesday’s Democratic primary battle against Robbie Leonard, an attorney who is both positioning himself as a criminal justice reformer while also arguing that Shellenberger has done a poor job dealing with Baltimore County’s murder rate. (Baltimore County is a separate jurisdiction from the city of Baltimore, where State’s Attorney Marilyn Mosby faces a competitive renomination fight of her own.)

The Baltimore Sun reports that Maryland Justice & Public Safety PAC, which is affiliated with a national organization run by philanthropist George Soros, spent $740,000 through Wednesday against Shellenberger. By contrast, the state’s attorney’s campaign only outspent Leonard $68,000 to $46,000 from mid-January through July 3.

Leonard has said of Shellenberger, “I always wondered, like, how is this state’s attorney a Democrat? … He’s always opposing legislation being put in by Democrats.” To make his case, Leonard has faulted the incumbent for opposing police reform legislation while only supporting a weak revised version. The challenger has also focused on an ongoing federal lawsuit alleging that Shellenberger and his office violated a woman’s rights by trying to stop her from filing rape charges after the state’s attorney decided not to prosecute her case.

Shellenberger, meanwhile, is arguing that Leonard does not have the experience to serve as the county’s top prosecutor. The incumbent has also tried to make Leonard’s outside support an issue, saying of Soros, “It seems to me that a billionaire who has no connection to Baltimore County should not be dictating who the state’s attorney is in Baltimore County … This person has a reputation for supporting progressive prosecutors around the country, and I don’t think that’s what we need or want here in Baltimore County.” The winner will be favored in the November general election in a county that supported Biden 62-35.

David French: “Hispanic Americans also tend to possess strong religious values…That’s exactly why a politics focused on mobilizing by race/ethnicity will not reach them, especially when identity politics is paired with hard-left cultural positions and hostility for traditional religion. Hispanic voters will find a religious connection with many, many white Republicans, and that religious connection can prove far more culturally and politically consequential than any effort to create a politics based on ethnic or racial identity.”

“The disproportionate secularization of white Democrats represents a danger for the Democratic Party, for the country, and for American religion. The danger for the Democrats is clear. America may be more secular than it’s been in generations, but it is still a quite religious country. It’s far more religious than any European nation. It’s far more religious than Canada or the rest of the anglosphere nations. And it’s going to remain extraordinarily religious for the foreseeable future.”

“A party that’s culturally disconnected from (or perhaps even scornful of) traditional religious faith is going to alienate itself from tens of millions of voters it could otherwise reach.”

Associated Press: “This idea has seeped deeply into this year’s Republican primaries, which have revealed a new political strategy among numerous candidates: running on a platform that denies President Donald Trump’s defeat two years ago. As some of those candidates lose their own races, they are reaching new frontiers in election denial by insisting that those primaries, too, were rigged.”

Washington Post: “Democrats hoping to inject new urgency into these contests are demanding more money and attention from party leadership — with no clear indication they will get what they want.”

“Instead, Democratic messaging has largely focused on federal races and a debate over the Senate filibuster, some frustrated Democrats noted, even as individual states now have sole discretion over abortion laws.”

“The expanded use of drop boxes for mailed ballots during the 2020 election did not lead to any widespread problems, according to an Associated Press survey of state election officials across the U.S. that revealed no cases of fraud, vandalism or theft that could have affected the results,” the AP reports.

“The findings from both Republican- and Democratic-controlled states run contrary to claims made by former President Donald Trump and his allies who have intensely criticized their use and falsely claimed they were a target for fraud.”

PENNSYLVANIA GOVERNOR. Philadelphia Inquirer: “The removed videos include freewheeling discussions in which Mastriano predicts that this November’s election will be marred by Democratic voter fraud; accuses Republicans who don’t support him of looking down on veterans; and calls the fight against abortion ‘the most important issue of our lifetime.’”

“This has become somewhat of a pattern for Mastriano, 58, a retired Army colonel who bills himself as a plainspoken populist. He communicates directly with voters online, yet sometimes covers his tracks.”

“Before this latest batch of deletions, Mastriano removed potentially problematic or controversial posts, including tweets promoting the Qanon conspiracy theory, as well as videos in which he called local faith leaders ‘cowards’; acknowledged his Covid diagnosis while visiting the White House; and feuded with GOP lawmakers in Harrisburg.”