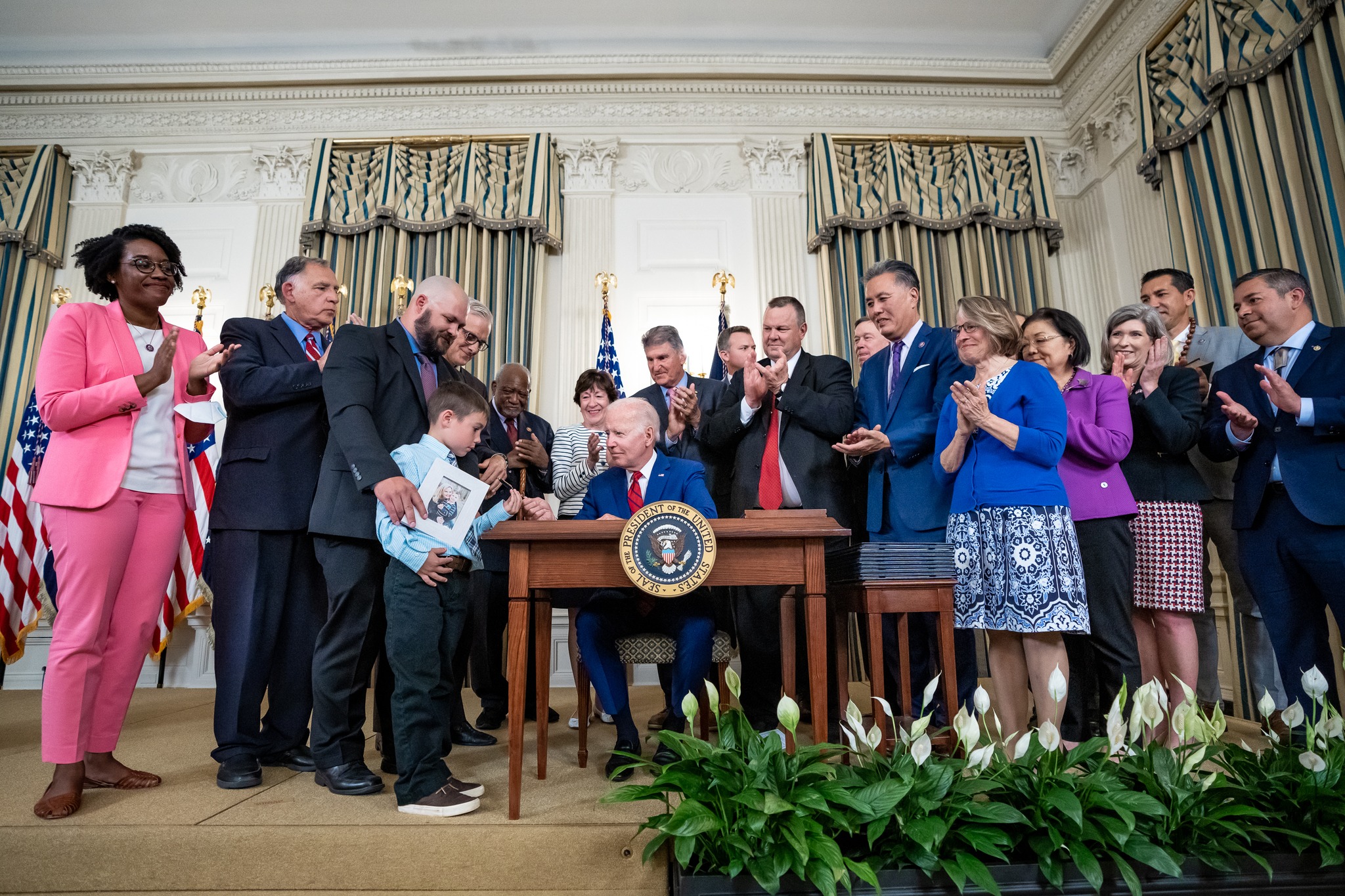 A new Fox News poll finds both Democrats and Republicans “are equally motivated to vote, and that if the midterm election were today, 41% of voters would back the Democratic candidate in their House district and 44% the Republican.”

“That 3-point edge is unchanged from June and within the poll’s margin of sampling error. However, this is the seventh straight poll since December where the Republicans have been ahead, ranging from one to seven points.”

“According to Fox News modeling, a 3-point edge translates into a GOP gain of about 23 seats.”

A new New York Times/Siena poll finds just 10% of registered voters say the U.S. economy is “good”or “excellent,” a remarkable degree of pessimism at a time when wages are rising and the unemployment rate is near a 50-year low.

Bad news for Democrats: “78% of voters say inflation will be ‘extremely important’ when they head to the polls.”

But a head-scratcher: “43% of voters said their personal financial situation was good or excellent.”

Josh Kraushaar: “Top Republicans, once confident about winning control of the Senate in the midterms, fear they’ll blow it after nominating several deeply flawed candidates in winnable states, according to conversations with GOP strategists, pollsters and other officials.”

“Senate Minority Leader Mitch McConnell (R-Ky.) has been sounding this alarm for months: electing fringe candidates with checkered pasts could squander a golden chance to reclaim power. Now, McConnell is left hoping for a red wave so wide and powerful that candidate quality is irrelevant.”

TEXAS GOVERNOR. “Beto O’Rourke on Friday reported raising nearly $32 million during the first half of 2022, keeping his challenge against Texas Republican Gov. Greg Abbott on track to be one of the nation’s most expensive races in November’s midterm elections,” the AP reports.

“Abbott had already been sitting on $50 million as recently as February. His campaign had not yet released its latest fundraising numbers, which were due Friday in Texas.”

Greitens will likely will likely face questions about allegations that he abused his ex-wife and their young children in 2018. It could expose damaging information about the U.S. Senate candidate just weeks before the Republican primary on Aug. 2.

ARIZONA U.S. SENATOR. Billionaire Peter Thiel “may be more responsible than anyone else for Blake Masters’ ascent in the Arizona Republican Senate primary,” Insider reports.

OHIO U.S. SENATOR. Daily Beast: “That’s the key takeaway from Federal Election Commission filings this week, which show that between mid-April and the end of June, the Vance team raised a million dollars, spent more than that, and is a quarter of a million dollars in the hole with just four months until election day.”

“It’s not the full picture for Vance, whose fundraising operation includes a leadership PAC and joint fundraising committees. But even that isn’t much better.”

The Democratic group Future Forward PAC has doubled its buy against Republican J.D. Vance by throwing down an additional $710,000 on an ad campaign attacking his opposition to abortion rights. Other major outside groups have largely bypassed the general election in this conservative-leaning state so far.

Democratic rival Tim Ryan, by contrast, hauled in $9.1 million during this time and had $3.6 million to spend. (Two of Vance’s joint-fundraising committees took in a total of $2.3 million and had a similar amount on-hand, but that still put them well behind Ryan.) Vance, though, may be counting on billionaire Peter Thiel, whose super PAC spent $15 million to get him the GOP nod in May, to rescue him if he runs into any trouble.

WYOMING AT LARGE CD. “Former President Donald Trump’s pick to unseat Rep. Liz Cheney in the race for Wyoming’s lone House seat holds a commanding 22-point lead with a month until the primary,” a new Casper Star-Tribune poll shows.  “Natural resources attorney Harriet Hageman leads Cheney 52% to 30%, the poll shows. No other challenger received more than 5% support. Only 11% of voters were undecided.”

Casper Star Tribune: “The Democratic exodus is unprecedented in recent Wyoming history, even if it appears unlikely to alter the final result.”

PENNSYLVANIA U.S. SENATOR. “New court papers in Manhattan reveal that TV personality-turned Pennsylvania GOP congressional candidate Dr. Mehmet Oz is embroiled in an intensifying inheritance battle in the US and Turkey — complete with accusations of a forged will and millions of dollars looted from an Istanbul bank account,” Yahoo News reports.

ARIZONA GOVERNOR. “Former Vice President Mike Pence is endorsing Republican Karrin Taylor Robson in the Arizona governor’s race, pitting himself against Donald Trump in a primary that is emerging as a proxy fight between the former president and Republicans who resisted his efforts to overturn the 2020 election results,” Politico reports.

“It represents the latest breach in the relationship between Trump and Pence, and it’s the second time the two have collided in a primary. And Pence is slated to campaign for Robson on Friday — creating a dramatic split-screen moment opposite Trump, who is set to hold a rally for his endorsed candidate, former local TV news anchor Kari Lake, the same day.”

MICHIGAN GOVERNOR. Wealthy businessman Kevin Rinke is airing what appears to be the first negative ad of the Aug. 2 Republican primary, a spot that accuses conservative radio host Tudor Dixon of being “endorsed by the RINO establishment’s leading never Trumpers” and of having “taken millions from the same billionaires who tried to illegally remove Trump from office.” The spot features images of Mitt Romney, Adam Kinzinger, Liz Cheney, and Betsy DeVos to make its case that Dixon is part of the anti-Trump wing of the party, though the former education secretary is the only one who has anything to do with her campaign.

DeVos was far from an outcast in Trumpworld until she resigned from his cabinet one day after the Jan. 6 attack. Her husband, billionaire Dick DeVos, endorsed Dixon in May, though the Detroit News notes that there’s no indication yet that the family has contributed “millions” to support the candidate.

CNN: “The [Steve Bannon podcast] is a hefty contributor to a grassroots surge that is sending political neophytes to city councils, school boards, and state legislatures, as well as to the polls to oversee voting.”

“But unlike other firebrand personalities, Bannon isn’t just tapping fear and resentment for ratings or money; he uses his show as a strategic vehicle.”

“Republican officials are poised to choose Milwaukee to host their 2024 national convention, with the party’s site selection committee voting in favor of the city, a Democratic stronghold in a Midwest battleground,” the New York Times reports.

“But the decision is not final and the Republican National Committee must approve the choice during its summer meeting early next month.”

“Former President Donald Trump’s online fundraising has slowed in recent months, a financial disclosure on Friday showed, adding to doubts over the firmness of his grip on the Republican Party,” Reuters reports.

“Trump’s political committees raised about $18 million between April and June, about $2 million less than in the prior three months.”

“Trump’s decline, seen both among small and large donors, contrasts with fundraising growth across the rest of the Republican Party, as campaigns heat up ahead of the Nov. 8 midterm elections, when Republicans hope to seize control of Congress.”

Josh Kraushaar notes “unusually weak” fundraising numbers from Senate Republicans in the second quarter, despite the historically-strong political environment for their party.

In contrast, many Democrats are hitting fundraising records.