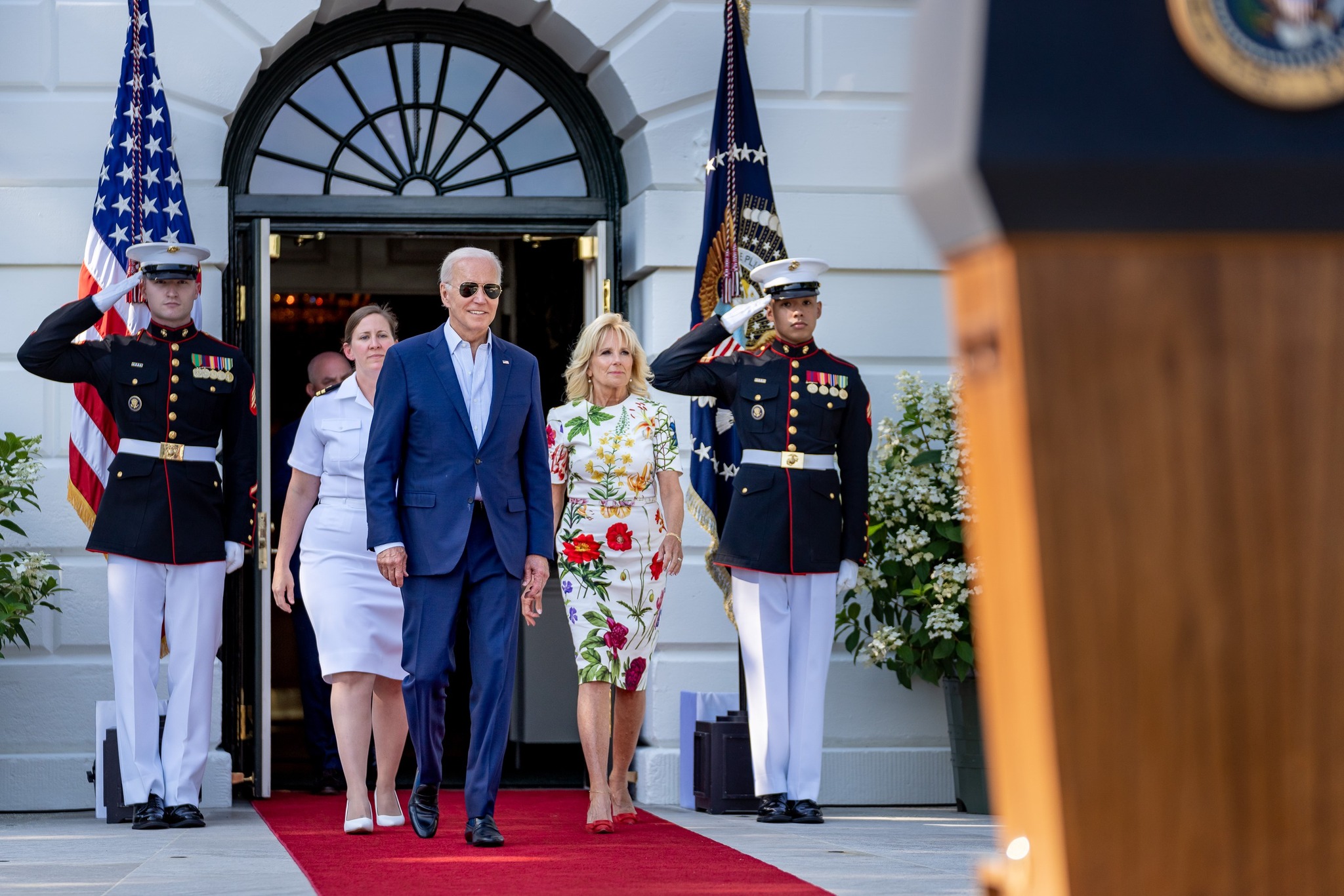 Democratic strategist Joe Trippi sounded pretty upbeat in a conversation with Bill Kristol on his party’s chances in the midterm elections.

His observations at this point:

Jonathan Last: “My initial reaction to all of this is that it sounds too good to be true. We can’t have nice things. This is the darkest timeline. Etc. But on the other hand, there is no one I respect more than Trippi when it comes to nuts-and-bolts political analysis.”

“Just 18% of Americans say President Biden should run for reelection in 2024, according to the latest Yahoo News/YouGov poll — the lowest number to date. Nearly two-thirds (64%) say he should bow out.”

“And for the first time, more Democrats now say Biden should pass on a second term (41%) than say he should pursue one (35%).”

Pew Research: “With public views of the nation’s economy at their most negative in years, Joe Biden’s political standing is at the lowest point of his presidency. Yet Biden is hardly the only focal point of the country’s political discontent: Americans express unfavorable views of both major parties and a range of leading political figures, including Biden’s predecessor, Donald Trump.”

“Biden’s current job approval numbers are the lowest since he became president, with 37% of U.S. adults saying they approve of how he is handling his job as president while 62% disapprove.”

“Election officials are confronting a wave of threats and security challenges coming from a troubling source: inside the election system itself,” Politico reports.

“In interviews on the sidelines of the National Association of Secretaries of State’s summer conference, a dozen chief election administrators detailed a growing number of ‘insider threats’ leading to attempted or successful election security breaches aided by local officials. The most prominent was in Colorado, where a county clerk was indicted for her role in facilitating unauthorized access to voting machines. But there have been similar instances elsewhere, including in Pennsylvania, Michigan and Ohio.”

Politico: “Some of the most endangered House Democrats are hoping to inoculate themselves ahead of a potentially brutal November by going up on TV months before the typical end-of-summer ad rush. Nine incumbents in battleground seats were already airing ads by early July, according to a Politico analysis — and some plan to keep going straight through to November.”

“It’s much earlier than House candidates typically start their general election advertising, and it’s a sign of Democrats’ political reality: Republican candidates and big-spending allied super PACs are ready to capitalize on deep economic unease and President Joe Biden’s sagging approval ratings by contesting dozens of blue districts this fall. But the second-quarter campaign finance reports due Friday will show that most battleground Democrats in Congress are flush with cash, and a growing number have responded by unleashing a steady stream of advertising early, seeking to define themselves before the attacks start — and while the airwaves are less expensive or crowded.”

BALTIMORE STATE’S ATTORNEY. New campaign finance reports show that incumbent Marilyn Mosby, who was indicted in January for allegedly filing false mortgage applications and lying to federal prosecutors, is getting badly outspent by both of her opponents ahead of Tuesday’s Democratic primary. However, there’s been no reliable polling in the race for Baltimore state’s attorney in months, so it remains anyone’s guess whether the high-profile Mosby is in real danger of failing to take the plurality she needs to win renomination in this loyally blue town against two very familiar opponents.

Mosby, who rose to national prominence in 2015 just months into her first term when she charged six police officers in the death of Freddie Gray, won her primary in 2018 by beating defense attorney Ivan Bates 49-28, while the balance went to prosecutor Thiru Vignarajah. Both men are now back for a rematch, and they’re each benefiting from some well-known backers and serious financing.

Bates’ most prominent ally is former Mayor Sheila Dixon, who resigned in 2010 after she was convicted of stealing gift cards that were supposed to help needy families but nevertheless came close to winning the 2016 and 2020 primaries for her old job. Also in his corner is Mary Miller, who took third in the 2020 mayoral primary and has contributed $435,000 to a pro-Bates group called Building a Safer Baltimore PAC, a donation that appears to represent the PAC’s entire budget.

While Dixon and Miller are former rivals, they’ve starred in what the Baltimore Banner’s Mark Reutter characterizes as “ubiquitous TV ads” touting Bates as someone who is “focused on getting illegal guns off the streets” and will “work closely with all levels of law enforcement to go after the most violent offenders.” The spots don’t appear to have mentioned Mosby, who has clashed with the local police union ever since her unsuccessful prosecution of the officers charged in Gray’s death. Bates’ campaign itself has also spent $190,000 on TV from early June through last week.

Vignarajah, who finished fourth with 12% in the 2020 mayoral primary, this time sports a cross-party endorsement from Republican Gov. Larry Hogan. Vignarajah, Reutter writes, has spent $340,000 on TV, which is considerably more than what his two opponents’ campaigns have deployed. The candidate, though, earned some harsh headlines last week when 15 of his former colleagues and subordinates, in the words of the Baltimore Sun, came forward to characterize him as someone “who punished both men and women for perceived disloyalty and humiliated them in front of colleagues.”

As for Mosby, Reutter writes she’s spent a mere $20,000 on TV through last week, though she had $182,000 left for the final days. What Mosby lacks in money, though, she may be able to make up with a loyal base. Indeed, some political experts speculated earlier this year that her indictment could actually help her, with radio host Kaye Whitehead arguing, “If you’re a Marilyn Mosby supporter or someone who understands what it’s like to be an underdog, it is going to rile you up.” Mosby, who is Black, has cast the charges as the work of “racially motivated” prosecutors and insisted, “I won’t let others, that’s the media or anyone else, define my narrative.”

No matter what, though, there’s a good chance we’re not going to know the winner’s identity until well after Tuesday’s vote concludes. That’s because state election officials aren’t allowed to even start to tabulate mail-in ballots, which the Washington Post writes could make up a “significant” proportion of the total, until Thursday. In May, Hogan vetoed a measure that would have allowed these ballots to be processed ahead of Election Day; the state board of elections decided not to sue because of time constraints, though it could take action to prevent this sort of delay for the general election.

FLORIDA 7TH CD. Former Navy SEAL Brady Duke is the second Republican in this crowded primary to run an ad that uses his military background to implicitly threaten violence against his political opponents. The spot features Duke touting his military record as a sniper before he bemoans “career politicians” whose agenda is “destroying America” as images of Joe Biden, Nancy Pelosi, and Alexandria Ocasio-Cortez appear on screen, after which Duke appears in full military garb aiming his rifle offscreen as he clears the chamber and vows to “take aim at Washington.”

Duke’s spot follows an ad by Army veteran Cory Mills, a rival in the Aug. 23 GOP primary who earlier this year ran a commercial where he appeared in camouflage holding an assault rifle while bragging about starting a “riot control” company that sold tear gas used on Black Lives Matter protesters. Claiming that “the liberal media is crying about it,” a giddy Mills said he could help them “shed some real tears.”

NEW YORK 10TH CD. The Democratic primary for New York’s open 10th Congressional District in lower Manhattan and Brooklyn is a wide open race according to a new survey from progressive firm Data for Progress, which says it polled the contest independently:

This is the first poll of the race from a reputable outfit, but given the large sums already raised by many contenders, the fact that just 10 points separate the top half dozen candidates, and the sizable swath of undecided voters, much can and likely will change between now and when voters head to the polls on Aug. 23.

NEW YORK 11TH CD. Republican Rep. Nicole Malliotakis and the NRCC have released the first poll of the freshman congresswoman’s rematch with former Democratic Rep. Max Rose, which finds her leading 51-36, per GOP firm 1892 Polling. Democrats sought to make this Staten Island district considerably bluer in redistricting, a move that doubtless inspired Rose to run again. However, those plans were undone by the courts, which restored this district largely to its previous configuration. Under the current lines, it would have voted 53-46 for Donald Trump.

The ad falsely implies Norton is gay by showing him in a photo posing outside a club with a male friend and the caption: “Elijah Norton isn’t being straight with you.”

“Congressional candidate Carl Paladino (R) has a convicted sex offender on his company payroll who also now works as ‘assistant treasurer’ of his campaign,” the New York Post reports.

Arizona congressional candidate Jerone Davison (R) declared on a right-wing television show that he is running for office because the Antichrist is “being birthed and manifested through the Democrat Party.”