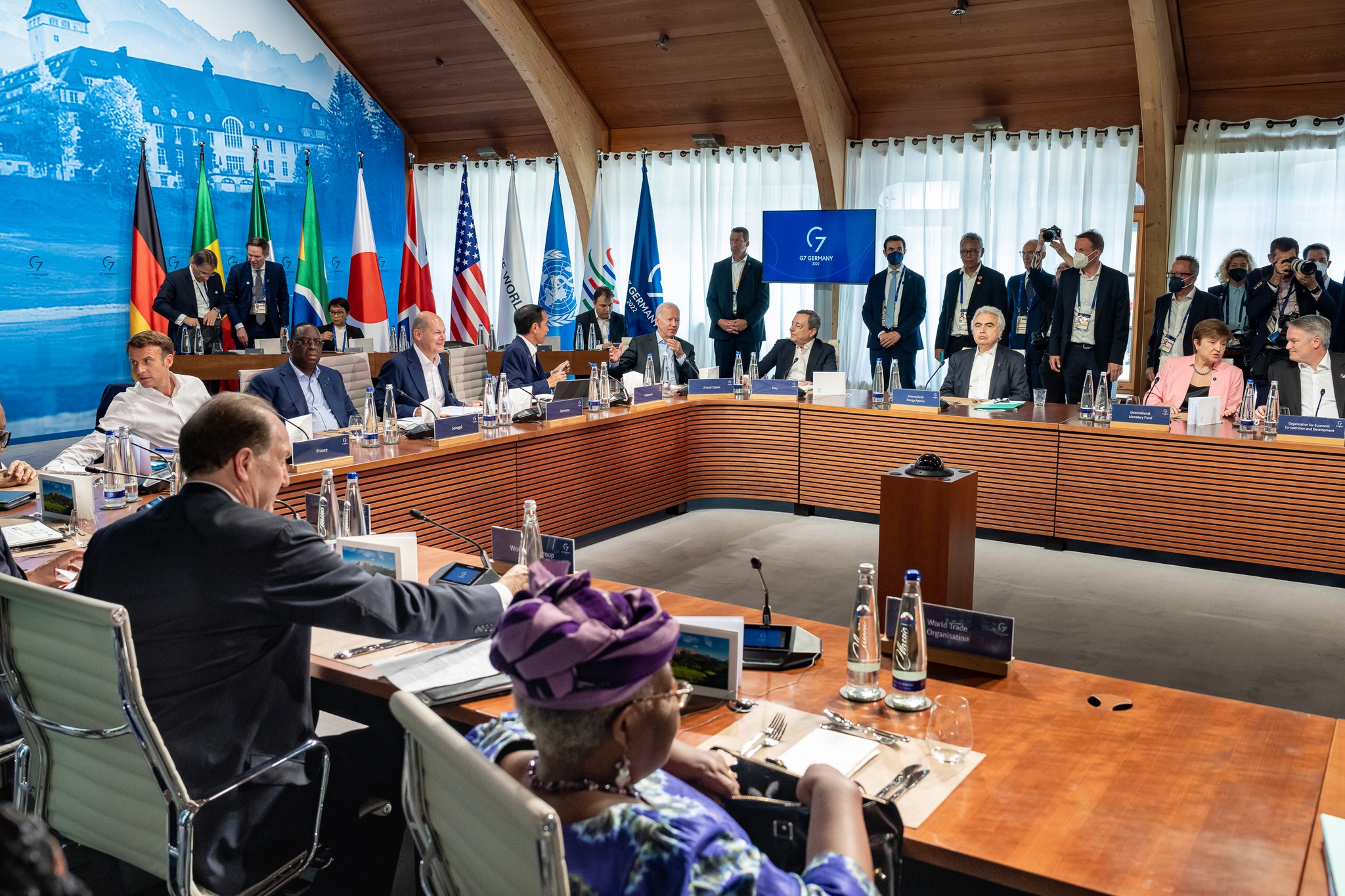 With Sen. Joe Manchin (D-WV) killing — or at best delaying — climate provisions of a budget reconciliation bill, President Biden issued a statement saying he is moving on.

Said Biden: “If the Senate will not move to tackle the climate crisis and strengthen our domestic clean energy industry, I will take strong executive action to meet this moment.”

Instead, Biden said he wants the Senate to pass legislation to lower prescription drug prices and extend funding for the Affordable Care Act — even if it lacks climate provisions or tax increases — before the August recess.

Biden knows a reconciliation bill with a vote-a-rama will never pass after the August recess with elections coming up.

In a radio interview, Sen. Joe Manchin (D-WV) denied last night’s reports that he killed the climate and tax portions of the Democratic spending package.

Said Manchin: “I said, ‘Chuck, can we just wait until the inflation figures come out in July? Until basically the Fed rate — the Reserve, are they going to raise interest? How much more, and how much damage is that going to be? And then make a decision what we can do and how much we can do?’ He took that as a ‘no,’ I guess, and came out with this big thing last night.”

He added: “And I don’t know why they did that. I guess to try to put pressure on me, but they’ve been doing that for over a year now. It doesn’t make any sense at all. As far as I’m concerned, I want climate, I want an energy policy.”

New York Times: “Privately, Senate Democratic staff members seethed and sobbed on Thursday night, after more than a year of working nights and weekends to scale back, water down, trim and tailor the climate legislation to Mr. Manchin’s exact specifications, only to have it rejected inches from the finish line.”

Playbook: “Now, the question becomes: Is the damage already done — and have Democrats run out of patience and grace for Manchin?”

Jonathan Chait: “Joe Biden once dreamed of an FDR-size domestic-reform agenda. But the collapse of negotiations in Congress on the compromise of the compromise of that agenda will ensure he achieves nothing of the sort — not Roosevelt-size, not Obama-size, nor even Clinton-size. (Bill Clinton managed to increase taxes on the rich, expand the Earned Income Tax Credit, and create a health-care benefit for poor children.)”

“In addition to losing its chance to address any domestic social need in an enduring way, the administration is also having imperiled its global leadership on climate change and a global corporate minimum tax, two measures that hinged on Biden getting his own country’s house in order.”

“President Biden greeted Crown Prince Mohammed bin Salman with a fist bump Friday as he arrived here for a controversial meeting with the Saudi leader, capping his first trip to the Middle East with a high-stakes diplomatic engagement where he is expected to address a range of issues from oil production to human rights to the war in Yemen,” the Washington Post reports.

“Biden descended Air Force One on a light purple carpet and was greeted by a small coterie of Saudi officials. Unlike the elaborate and effusive welcome ceremony that greeted him Wednesday when he arrived in Israel, Biden was only on the tarmac at King Abdulaziz International Airport for one minute before entering the presidential limousine and departing.”

Jonathan Bernstein: “Trump didn’t commit ordinary crimes (well, he probably did, and that weighs on all of this too, but it’s not the main thing). He attempted to overturn an election that he had lost, and used the presidency to do so. That’s become clearer and clearer as the House committee investigating the assault on the US Capitol of Jan. 6, 2021 has presented its case.”

“Experts seem to believe that the evidence is there and that conviction is likely for Trump’s efforts to pressure election officials to falsify results, to gin up slates of fake electors and to provoke the Capitol mob. And it’s highly relevant that Trump to this day, long after the election, continues to try to overturn the legitimate result. Prosecutors should take it into account if a person constantly takes to the biggest stages and in effect brags about his crimes and promises to commit them again if he has the chance…”

“If all of this sounds as if the ultimate decision by the Justice Department will be political in nature… well, that’s correct. Prosecutors have to balance the threat to the nation from indicting a former president against the threat to the nation of not doing so. Given the facts we’ve seen, it’s just not that hard a choice. Trump’s crimes are too important, and too dangerous, to ignore.”

“Russian state media have confirmed the death of one of Moscow’s top generals during heavy fighting in Ukraine’s eastern Donbas region,” the BBC reports.

“The Department of Homeland Security inspector general on Friday briefed all nine members of the House select committee investigating the US Capitol attack on January 6, 2021, about the Secret Service erasing text messages from the day of the riot and the day before,” CNN reports.

“A member of the US Secret Service Counter Assault Team was detained by the Israeli national police in Jerusalem this week after he allegedly assaulted a woman outside of a bar and the Secret Service says the agent is on his way back to the US,” CNN reports.

“The House on Friday passed legislation that would protect access to reproductive health care, including the ability to travel across state lines for an abortion, as part of Democrats’ efforts to minimize the consequences of the Supreme Court overturning Roe v. Wade last month,” the Washington Post reports.

“Despite passage in the Democratic-led House, the bills are almost certain to fail in the Senate, where they would require 60 votes or the suspension of filibuster rules and a simple majority.”

Every single Republican voted against the measure to codify Roe v. Wade.

“Russian President Vladimir Putin on Friday reshuffled his top officials, naming a new head of the state space corporation and giving new broad powers to one of his top ministers,” the AP reports.

“The deal would have allowed Navarro to plead guilty to one of two contempt of Congress charges for not cooperating with the House’s ongoing January 6 investigation. Navarro would also be required comply with the House select committee’s subpoena ‘to the satisfaction of the Justice Department,’ and would cap Navarro’s potential jail sentence at 30 days.”

“In the latest sign she is moving rapidly in her investigation into Donald Trump’s efforts to overturn the 2020 election, Fulton County District Attorney Fani Willis has sent so-called ‘target letters’ to prominent Georgia Republicans informing them they could be indicted for their role in a scheme to appoint alternate electors pledged to the former president despite Joe Biden’s victory in the state,” Yahoo News reports.

“The Atlanta-area district attorney leading a wide-ranging criminal investigation into election interference by Donald Trump is weighing whether to call the former president before a special grand jury,” USA Today reports.

“Former President Donald Trump and two of his children got their questioning postponed Friday in a New York civil investigation into their business dealings, a delay that follows the death of Trump’s ex-wife Ivana,” the AP reports.

“The ex-president, son Donald Jr. and daughter Ivanka had been scheduled for depositions — a term for out-of-court questioning under oath — starting as soon as Friday. But New York Attorney General Letitia James’ office said it had agreed to postpone them because of Ivana Trump’s death.”

“This curious feature of the Obama and Trump presidencies has been documented in political science research. One explanation is that in an era of strong partisanship, it’s harder for presidents to win over many opposite-party voters in periods of economic growth, or lose the support of their own party’s voters in a recession.”

“But Biden’s presidency looks different, at least so far. As consumer sentiment has dropped, Biden’s approval rating has dropped with it.”

“A group of Donald Trump’s former aides are preparing a turnkey administration for his return to the White House, as the embattled former president hints that he’s preparing to make a third run for the nation’s highest office,” Bloomberg reports.

“America First Policy Institute, a nonprofit led by former Trump cabinet member and World Wrestling Entertainment executive Linda McMahon, has essentially assembled a shadow government for Trump — or, potentially, any other Republican who takes the White House from Democrats in 2024.”

“Mississippi’s top legal official has no plan to prosecute the white woman whose accusation set off the lynching of Black teenager Emmett Till nearly 70 years ago, an aide said Friday following revelations about an unserved arrest warrant and a newly revealed memoir by the woman,” the AP reports.

Philip Bump: “While most Americans have nuanced views of abortion, many of those in the Republican base don’t. Republican primary voters, if not donors, hold a harder line on abortion than do most Americans, and it’s those vocal, active Republicans who probably have the most success in driving the actions of Republican leaders. Just as the vocal, hard-right base of support for Trump shaped and continues to shape Republican politics.”

“Vice President Harris is set to lose one of her closest and longest-serving aides in August with the departure of domestic policy adviser Rohini Kosoglu, whose planned exit follows a major shake-up of the office late last year and into the spring,” the Washington Post reports. Harris’ director of speechwriting, Meghan Groob, is leaving the office less than four months into the job, Politico reports.

Frederick Frazier (R), a Texas House candidate backed by Donald Trump “has been indicted on a charge of impersonating a public servant,” the Texas Tribune reports.

A new Gallup poll finds that the world is feeling more stressed and unhappy than ever before.