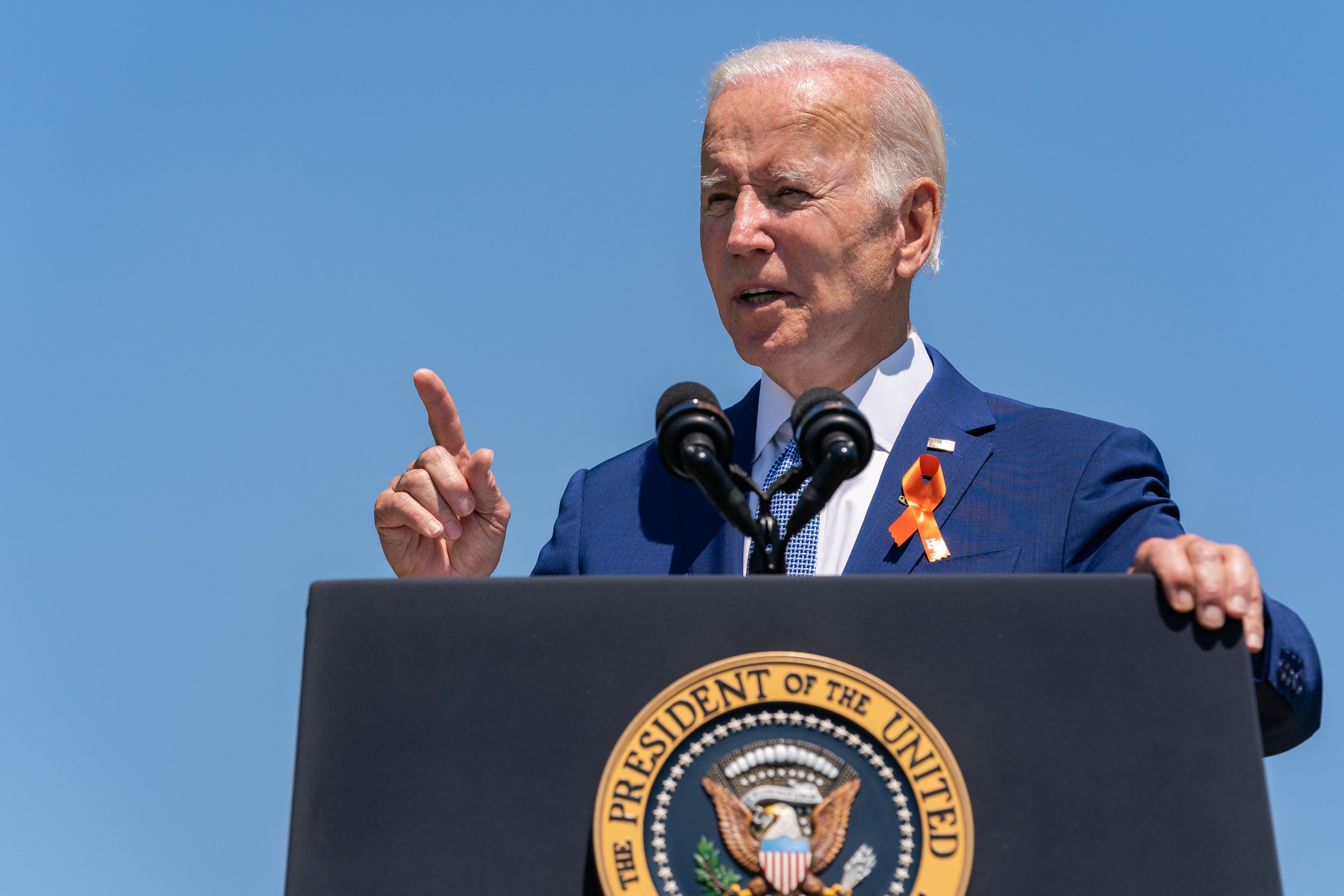 When asked by Olivia Nuzzi if he’ll run for president in 2024, Donald Trump “wouldn’t disclose what he’d decided. Not at first. But then he couldn’t help himself.”

He was thinking aloud now: “I just think that there are certain assets to before. Let people know. I think a lot of people would not even run if I did that because, if you look at the polls, they don’t even register. Most of these people. And I think that you would actually have a backlash against them if they ran. People want me to run.”

He also swore that shielding himself from prosecution is not among his reasons for running for president: “Well, I did nothing wrong, so I don’t see that. I did absolutely nothing wrong. I had a perfect phone call in Georgia, so I’m not concerned with it.”

“And I will tell you, I’ve already in my own mind very much made my decision.”

“Of all the selfish things he does every minute of every day, it would probably be the most.” — A “prominent” GOP strategist, quoted by the Washington Post, on Donald Trump possibly announcing a presidential bid before the midterms.

“I would not be disappointed.” — President Biden, when asked by a reporter if he thinks he will face Donald Trump again in the 2024 election.

“Donald Trump has quietly convened some of his wealthiest and highest-profile supporters for intimate dinners in recent weeks, where the groups have talked about the former president’s 2024 election plans — and debated when he should make his expected comeback bid official,” Politico reports.

“The gatherings have taken place in Houston, Nashville and, last Friday evening, in Las Vegas, where billionaire casino mogul and longtime Trump friend Phil Ruffin implored the ex-president to launch another run for the White House soon. The consensus has been that Trump should run again — the only question being when he should announce, with most echoing Ruffin’s view but others saying Trump would be better served by waiting until after the midterm elections.”

“Democrats aren’t just eager for Donald Trump to cannonball into the 2024 presidential race before the fall midterms. Across the country, they are actively plotting ways to immediately capitalize on a pre-November announcement,” Politico reports.

“Campaigns and officials at major Democratic outfits are planning to capture the anticipated cash windfall that would come their way should Trump announce he’s making another run at the White House. Candidates also are exploring ways to exploit Trump’s premature entry to energize despondent base voters and coalesce independents and suburb-dwellers who have soured on the party over stubbornly high inflation.”

Virginia Gov. Glenn Youngkin (R) tried to downplay rumors he was considering a 2024 presidential run, saying he was “hugely humbled” but “not a decision that we have even begun to undertake,” CBS News reports.

Tara Palmieri: “Advisors I’ve spoken with say that Trump is desperate to turn the national conversation away from Jan. 6. He’s calling around, asking for advice, and realizes he doesn’t have the same microphone he would have as a candidate. That’s a big thing that’s motivating him to announce.”

“He’s also obsessed with the perception that Jan. 6 is hurting him with big donors, who are tired of the antics and worry about how his Jan. 6 baggage will impact the presidential election if he decides to run. Not to mention they’re having a bit of a love affair right now with DeSantis, who they are donating to under the guise of his gubernatorial campaign.”

Nate Cohn: “With President Biden’s approval rating mired in the 30s and with nearly 80 percent of voters saying the country is heading in the wrong direction, all the ingredients seem to be in place for a Republican sweep in the November midterm elections.”

“But Democrats and Republicans begin the campaign in a surprisingly close race for control of Congress, according to the first New York Times/Siena College survey of the cycle.”

Politico: “Republicans knew the minute Roe v. Wade was overturned that they had a political problem, particularly with moderates in the suburbs who they need to vote for GOP candidates in the midterms. The unfolding story of a 10-year-old rape victim who crossed state lines from Ohio for an abortion in Indiana is confirming just how damaging the issue may be.”

Politico: “Democrats see it as a sign of momentum after the Supreme Court struck down Roe v. Wade last month and an uptick in their chances of keeping the Senate.”

The same poll shows President Biden’s approval rate at just 34% so that means Warnock is running a remarkable 16 points ahead of Biden.

This is one of the clearest examples of “voter decoupling” that we’ve seen so far.

The same poll has Biden’s approval at just 33%, so Cortez Masto is running 11 points ahead of Biden.

The question is whether this “decoupling” is a temporary blip — or a reflection of lingering doubts about the Trump-era Republican party that, as Ron Brownstein speculates “may override the typical reflex of voters unhappy with the president to vote for the other party.”

A new New York Times/Siena College poll finds Democrats now have a bigger advantage among white college graduates than they do with nonwhite voters.

GEORGIA U.S. SENATOR and GOVERNOR. New polling for the AARP finds Democratic Sen. Raphael Warnock leading Republican Herschel Walker 50-47 in his bid for re-election while Republican Gov. Brian Kemp holds a wider 52-45 advantage over Democrat Stacey Abrams in their rematch. The survey, which was conducted jointly by Democratic pollster Impact Research and Republican pollster Fabrizio Ward, mirrors other recent polling that has found Warnock running ahead of Abrams.

The Atlanta Journal Constitution reports that there’s a group of voters backing both Sen. Raphael Warnock (D) and Gov. Brian Kemp (R). “That dynamic is backed by public polling averages that indicate the governor is outperforming Walker by about 4 percentage points — and that Warnock is garnering more support than Abrams by roughly the same margin.”

“Sen. Raphael Warnock (D-GA) set the latest in a string of fundraising records by collecting $17.2 million between April and June, ending the quarter with roughly $22.2 million in the bank for a race that could decide control of the Senate,” the Atlanta Journal Constitution reports.

But the former football star sounded like he was still open to the idea on Tuesday: “I feel a debate is coming. A couple of weeks ago, his campaign talked about a debate but I don’t think they’ve contacted my group yet. But I’m ready for a debate. The last time I was on, I told you guys I’m ready for a debate whenever he’s ready.”

The Atlanta Journal Constitution found at least three other instances in recent weeks when Herschel Walker (R) explained his much ridiculed theory of climate change. In Columbus: “China’s bad air floats over into our good air. And now we’re trying to clean their bad air and of course it just floats over here and now we gotta clean it, so all we’re doing is throwing money at it.”

In St. Simons: “The trillions of dollars that you’re paying for is cleaning up their bad air but now it’s gonna float back over to China because of the Earth’s rotation and until we can get China and all of these other places to invest in it, it isn’t gonna be any good.”

In south Georgia: “We’re gonna clean it up a little better than it’s already cleaned. But our good air, since we don’t control it, is gonna float over to China where they got bad air. Now China’s bad air floats over to us, where we have the good air.”

MISSOURI U.S. SENATOR. Save Missouri Values PAC, which is supporting state Attorney General Eric Schmitt in the Aug. 2 GOP primary, is running a new ad painting Rep. Vicky Hartzler as a corrupt creature of “the D.C. swamp” for supposedly taking $1 million in “government handouts,” noting that Trump in a recent not-tweet said he will “NOT BE ENDORSING HER.”

WASHINGTON U.S. SENATOR. A new poll from SurveyUSA conducted for the Seattle Times, KING 5 TV, and two local universities shows Democratic Sen. Patty Murray defeating Republican Tiffany Smiley 51-33. That’s the widest margin Murray’s enjoyed in public polling this year, but that larger spread is due to Smiley’s low vote share rather than the incumbent’s own performance reaching new heights; other recent surveys have found Smiley in the low 40s, with Murray generally around the 50% mark.

ARIZONA GOVERNOR. A new poll for the Arizona Research Consortium, a progressive nonprofit, finds Democratic frontrunner Katie Hobbs with a wider lead over Donald Trump’s pick for governor compared to her more establishment-flavored GOP primary rival. The survey, conducted by Democratic pollster TargetSmart, shows Hobbs beating Kari Lake 47-38 but edging past Karrin Taylor Robson by a smaller 44-39 margin. A Hobbs internal from May identified a similar pattern, with the Democrat up 50-45 on Lake but just 47-46 on Taylor Robson.

Unlike in many other races with such apparent electability gaps, though, Democrats have not spent any money seeking to influence the Republican race, where Lake enjoys a small lead in recent polling. (The state party sent out a press release the other day highlighting Taylor Robson’s past donations to Democrats, but that’s it.) And there’s not much time left, since the primary is fast approaching on Aug. 2, but a last-minute ad buy to boost Lake remains a possibility.

“Despite running as a staunchly anti-transgender and anti-abortion candidate, far-right Arizona gubernatorial candidate Kari Lake once posted in support of transgender youth and asked her followers about aborting fetuses who would be born with disabilities in social media posts from 2015 and 2016,” CNN reports.

PENNSYLVANIA U.S. SENATOR. Mehmet Oz (R) “spent months in a Pennsylvania Senate race touting a history of hunting in Florida. But the state Fish and Wildlife Conservation Commission has confirmed Oz never had a license to legally hunt in the Sunshine State,” Florida Politics reports.

“The vast majority of property Oz owns in the state of Florida remains unsuitable for hunting.”

WISCONSIN U.S. SENATOR. Lt. Gov. Mandela Barnes’ newest commercial for the Aug. 9 Democratic primary features his mother, Lajuan Barnes, describing how she needed to have a life-saving abortion. “It was my decision. Not some politician’s,” she says, to which Mandela Barnes adds, “Every woman has the right to make her own decision. And I’ll fight alongside you every step of the way until you do.”

GEORGIA GOVERNOR. Democrat Stacey Abrams’ new spot makes the case that GOP Gov. Brian Kemp’s gun laws have made Georgians less safe, which is the sort of argument that almost no statewide candidate would have tried in past races here. The commercial features a former deputy sheriff declaring that Kemp has “made it easier for criminals to carry loaded guns in public, at the movies, in church.” He continues, “Mr. Kemp, I call that criminal carry. Brian Kemp may talk tough, but he makes us less safe.”

Paul Begala: “I am old enough to remember when it was right-wing Republicans who were hellbent on tearing down Democratic presidents like Barack Obama and Clinton; now the progressives are practically doing the GOP’s job for them.”

“I have a radical proposal for my progressive friends: Stop attacking Biden and start attacking Republicans. If you think Biden is too weak, don’t weaken him further for goodness sakes. Strengthen him, so he can lead the way forward.”

“Shifts in the demographics of the two parties’ supporters — taking place before our eyes — are arguably the biggest political story of our time,” Axios reports.

“Democrats’ hopes for retaining power rest on nonwhite voters remaining a reliable part of the party’s coalition. Democrats’ theory of the case collapses if Republicans make even incremental gains with those voters. Even small inroads with Hispanic voters could tip a number of Democratic-held swing seats to the GOP.”