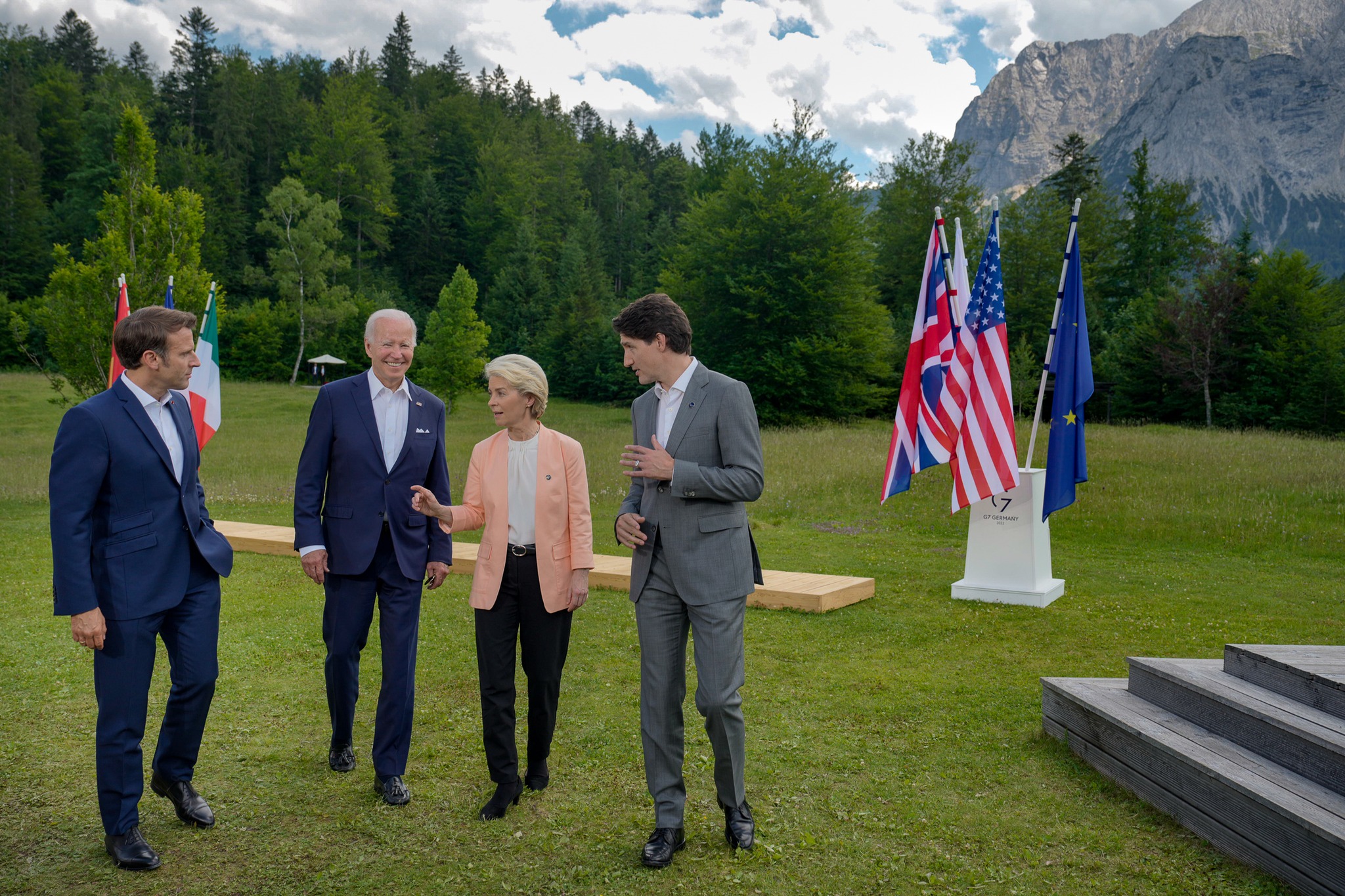 “As Donald Trump weighs whether to open an unusually early White House campaign, a New York Times/Siena College poll shows that his post-presidential quest to consolidate his support within the Republican Party has instead left him weakened, with nearly half the party’s primary voters seeking someone different for president in 2024 and a significant number vowing to abandon him if he wins the nomination.”

“By focusing on political payback inside his party instead of tending to wounds opened by his alarming attempts to cling to power after his 2020 defeat, Mr. Trump appears to have only deepened fault lines among Republicans during his yearlong revenge tour.”

From a new Politico/Morning Consult poll:

Do you believe Donald Trump should run for president in the 2024 election?

Do you believe Joe Biden should run for president in the 2024 election?

HAWAII 1ST and 2ND CD. MRG Research, polling on behalf of Civil Beat and Hawaii News Now, gives us our first look at the Aug. 13 Democratic primaries for each House seat. In the 1st District, which includes most of O’ahu, Blue Dog Rep. Ed Case enjoys a huge 65-8 lead over Sergio Alcubilla, an attorney who recently earned endorsements from the state AFL-CIO and several other unions.

Over in the open 2nd, which is home to the balance of O’ahu and the rest of the state’s islands, former state Sen. Jill Tokuda outpaces state Rep. Patrick Branco 31-6.

Civil Beat reports that the crypto-aligned PAC Web3 Forward is deploying at least $100,000 on ads to support state Rep. Patrick Branco, which makes this the first outside spending of the Aug. 13 Democratic primary.

Edwards’ supporters at J Street, a progressive pro-Israel organization that often finds itself at odds with AIPAC, is trying to help her by launching what appears to be the first negative ad of the contest against Ivey as part of its $660,000 TV and digital campaign. The narrator opens by declaring that Ivey “left public office to lobby for big business” and “gave thousands to a corporate PAC that funded Republicans like Mike Pence.” The spot then tries to turn AIPAC into a liability for Ivey by arguing that “his biggest supporter is a super PAC backed by two Republican billionaires” before promoting Edwards as a “true Democrat.”

MISSOURI 7TH CD. The Club for Growth is getting involved in what’s been a pretty quiet Aug. 2 Republican primary by airing a commercial accusing former state Sen. Jay Wasson of contributing thousands to Mitt Romney’s 2012 campaign but never giving “Trump a dime.” The Club doesn’t mention whether Wasson funded Romney’s primary campaign or general election bid against Barack Obama, nor does it mention its endorsed candidate, state Sen. Eric Burlison.

MARYLAND ATTORNEY GENERAL. VoteVets is airing a spot ahead of the July 19 Democratic primary faulting former Judge Katie Curran O’Malley over her own recent ad questioning Rep. Anthony Brown’s legal experience. VoteVets is a longtime ally of Brown, who served in Iraq as an Army Reserve lawyer.

SAN FRANCISCO DISTRICT ATTORNEY. Mayor London Breed announced Thursday that she was appointing former prosecutor Brooke Jenkins, who left the district attorney’s office to help lead the successful recall campaign against incumbent Chesa Boudin, to become the new district attorney. Jenkins, who identifies as Black and Latina and will be the first Latina to hold this office, will run in the November 2022 special election, and the winner will be up again for a full four-year term in 2023; both contests will be conducted using instant-runoff voting.

It remains to be seen if Jenkins, who immediately sought to set a different tone from Boudin by declaring, “​​We are a city of second chances, but the truth is we have to draw a line with people who choose hate, violence and a life of crime,” will face any serious opposition. We may not have heard the last of Boudin, though, as he didn’t rule out running in either contest late last month. Boudin, who won in 2019 as a criminal justice reformer, was ousted in June by a tough 55-45 margin, though late-counted ballots narrowed his deficit from the 60-40 spread we saw the day after the election.

NEBRASKA 2ND CD. Democrat Tony Vargas has released an internal from GBAO that shows him with a 48-47 edge over Republican incumbent Don Bacon in an Omaha-based seat Biden would have carried 52-46; the National Journal, which first publicized the poll, says it sampled 500 likely voters. The last survey we saw was a Change Research survey for Vargas’ allies at 314 Action done days before his May primary win, and it found the Democrat ahead 42-39.

NEW YORK 3RD CD. Rep. Tom Suozzi has endorsed Nassau County Legislator Josh Lafazan in the five-way Aug. 23 Democratic nomination contest to succeed him, though the incumbent’s influence at home may not be as strong as he’d like it to be. According to Newsday, Gov. Kathy Hochul defeated Suozzi 57-37 in the new boundaries of the 3rd District in last month’s primary for governor; Suozzi lost by a slightly smaller 56-39 in the existing incarnation of this Long Island seat.

MICHIGAN REFERENDUM. Michigan activists seeking to place a constitutional amendment on the ballot this fall that would guarantee the right to an abortion submitted more than 753,000 signatures to the secretary of state’s office on Monday—far more than the 425,000 required by law, and the most collected for a ballot initiative in state history. Officials must first verify the petitions, but given the huge cushion of extra signatures, it’s all but certain the measure will go before voters in November.

ARIZONA 1ST CD. Wealthy businessman Elijah Norton just sued Rep. David Schweikert, whom he’s trying to unseat in the Aug. 2 Republican primary, over what the challenger called “homophobic” messaging that falsely implies Norton is gay. Norton, News12’s Brahm Resnik writes, cited mailers and street signs that feature a 2018 photo of the candidate posing outside a club with a male friend named Leslie Hammon and the caption, “Elijah Norton isn’t being straight with you.”

Hammon also filed a defamation lawsuit against the congressman saying that he and Norton “are not and have never been in any romantic or sexual relationship.” Hammon, who said that people recognized his face on the mailer even though it was pixelated out, told the media that as a result of Schweikert’s actions, “My mental health has taken a pretty rapid decline. I had to take a leave from work for a couple weeks.”

This is not the first time Schweikert has engaged in such tactics. Norton’s campaign highlighted a similar ploy Schweikert used in his 2012 primary against fellow Rep. Ben Quayle, an effort that included a mailer saying Quayle “goes both ways.” Quayle condemned the message for falsely suggesting he was bisexual, but the uproar didn’t stop Schweikert from winning their contest by a narrow 51-49 margin. Two years later, Schweikert sent out an email for his re-election campaign with the subject line, “Politics Is Not For ‘Pansies’! Attend The Garden Party!”

Norton’s former company, CarGuard Administration, also recently filed a lawsuit against Schweikert and one of his consultants, but for a very different reason. The vehicle-warranty firm, which Norton still has a major ownership stake in, charged that the pair “have repeatedly and falsely characterized CarGuard as a ‘scam’ that engages in ‘illegal robocalls.'” CarGuard’s CEO also put out a statement that labeled Schweikert, who accepted a House reprimand in 2020 for violating 11 different congressional rules and campaign finance laws, “a two-time certified corrupt politician” and “a disgrace and embarrassment to the people of Arizona.”

ILLINOIS 6TH CD. Former Democratic Rep. Dan Lipinski said Monday that he’d forgo an independent run against Democratic incumbent Sean Casten and would instead work to promote other independent candidates. Lipinski, whose supporters gathered 5,400 petitions to get his name on the ballot, insisted he had enough valid signatures to meet the 5,000-petition minimum, though we’ll never know if he was right.

NEW YORK 17TH CD. Democratic Rep. Sean Patrick Maloney, who decided to run for the more secure 17th District rather than defend his competitive 18th District, has his daughter highlight how he “won in a Trump district” in his opening commercial. The spot, which is airing ahead of the Aug. 23 primary, also features his husband talking about how Maloney was the Empire State’s first gay congressman and his work fighting gun companies.