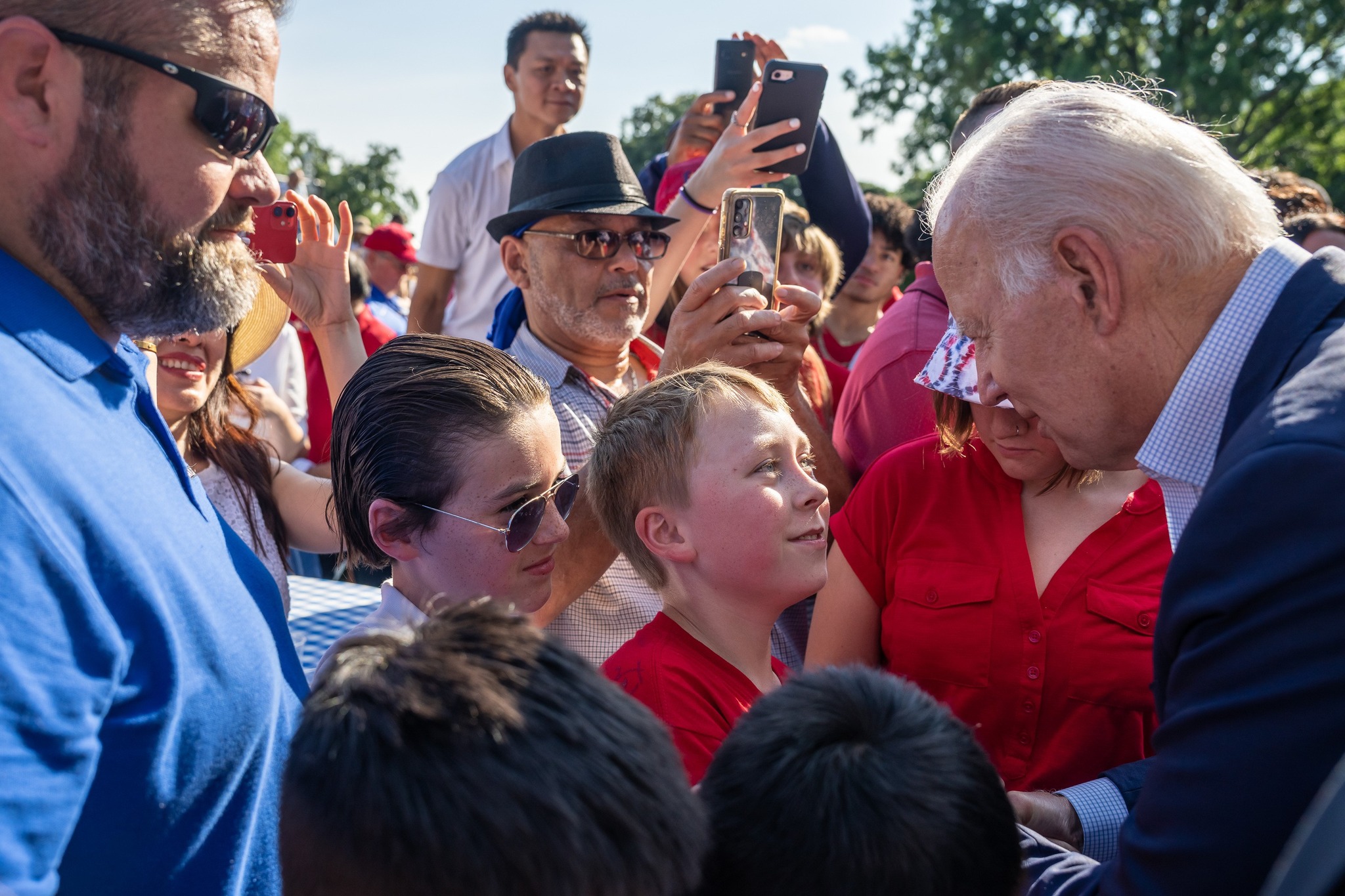 A new New York Times/Siena poll finds 64% of Democratic voters saying they would prefer a new standard-bearer in the 2024 presidential campaign.

Biden’s approval rating is a dismal 33%.

“Widespread concerns about the economy and inflation have helped turn the national mood decidedly dark, both on Mr. Biden and the trajectory of the nation. More than three-quarters of registered voters see the United States moving in the wrong direction, a pervasive sense of pessimism that spans every corner of the country, every age range and racial group, cities, suburbs and rural areas, as well as both political parties.”

CNN: As worries about Biden in 2024 grow, other Democrats aren’t stepping forward to challenge him.

These numbers are absolutely terrible for Democrats.

With an approval rate of just 33%, Joe Biden looks like the weakest incumbent president in decades. Even more alarming is that 61% of Democrats — and 94% of those ages 18 to 29 — don’t want Biden to run again. But what makes this incredibly odd is that when all voters were asked about the 2024 election, Biden would still beat Donald Trump 44% to 41%.

That puts Democrats in a precarious position.

David Leonhardt notes: “Other polls — by YouGov and Harris, for example — suggest Biden would fare better against Trump than Vice President Kamala Harris would. These comparisons are a reminder that Biden won the nomination in 2020 for a reason: He is one of the few nationally prominent Democrats who doesn’t seem too liberal to many swing voters. Biden, in short, is a wounded incumbent in a party without obviously stronger alternatives.”

Of course, there’s still a long time until the 2024 election. Biden may be persuaded to step aside for a younger candidate. Trump may decide not to run again.

The tremendous level of voter dissatisfaction — 77% think the country is headed in the wrong direction — raises the odds that a third-party candidate could run and influence the outcome. But until then, the biggest strength for each party appears to be the weakness of the other.

PENNSYLVANIA U.S. SENATOR. John Fetterman is trolling Republican Mehmet Oz on the airwaves and in the skies: The Democrat’s campaign went up with a new TV ad trashing Oz for his non-existent ties to Pennsylvania and followed that up by flying a banner reading “HEY DR. OZ, WELCOME HOME TO NJ! ❤️ JOHN” over South Jersey beaches over the weekend. The message flew from Cape May to Brigantine, a section of the Jersey Shore popular with many Pennsylvanians.

Oz probably wouldn’t know: He actually lives in North Jersey—in a palatial home overlooking the Manhattan skyline—and was busted by Fetterman’s team this week for recording a campaign video in the library of that very same mansion. How’d they figure it out? People magazine helpfully profiled the house in 2020, complete with a six-minute video revealing distinctive decorative elements—like, say, this candlestick—also found peeking out from behind Oz in his new recording.

But while Fetterman takes to the air, literally and figuratively, Oz, strangely, is nowhere to be found—in any state. Politico’s Holly Otterbein reports that Oz hasn’t run any spots on television since the May 21 primary, a date now seven weeks distant. Various unnamed Republicans—and a couple on the record—are unhappy with Oz’s apparent complacence, with some complaining that the wealthy celebrity should be spending more of his own money to go after Fetterman. Oz’s campaign wouldn’t say when it’ll go back up on TV and offered no real explanation for the absence, except to argue that Republicans in other key Senate races have also not run ads since winning their primaries.

Donald Trump admitted that he endorsed Mehmet Oz in the Pennsylvania U.S. Senate race because Oz called him a “very healthy specimen.”

“Rep. Tim Ryan — a Democrat angling to flip what many believed would be a safe Republican Senate seat in increasingly red Ohio — is unsubtly ratcheting up his efforts to woo GOP voters,” NBC News reports.  “Ryan’s latest TV ad will begin airing this week exclusively on Fox  News, although its reach could eventually expand beyond the cable network known for its conservative audience and prime-time programming.”

PENNSYLVANIA GOVERNOR. New York Times: “Mr. Mastriano’s ascension in Pennsylvania is perhaps the most prominent example of right-wing candidates for public office who explicitly aim to promote Christian power in America. The religious right has long supported conservative causes, but this current wave seeks more: a nation that actively prioritizes their particular set of Christian beliefs and far-right views and that more openly embraces Christianity as a bedrock identity.”

“Many dismiss the historic American principle of the separation of church and state. They say they do not advocate a theocracy, but argue for a foundational role for their faith in government. Their rise coincides with significant backing among like-minded grass-roots supporters, especially as some voters and politicians blend their Christian faith with election fraud conspiracy theories, QAnon ideology, gun rights and lingering anger over Covid-related restrictions.”

WISCONSIN GOVERNOR. Former Gov. Scott Walker is back on TV almost four years after his narrow re-election loss both to make the case for former Lt. Gov. Rebecca Kleefisch ahead of her Aug. 9 GOP primary and to slam her main rival, wealthy businessman Tim Michels. Walker declares in his ad for Kleefisch, “But while Rebecca and I were fighting for reform, Tim Michels’ company was teaming up with the union bosses and those lobbying for a gas tax increase.” As Walker says those lines, footage plays reminding the audience of the massive 2011 protests against his anti-labor legislation.

While Kleefisch and her allies have spent the past few days arguing that Michels “pushed for years to raise our gas tax,” this is the first spot to argue that the Trump-backed Michels aligned himself with unions and against the Walker-Kleefisch administration. However, the Milwaukee Journal Sentinel’s Katelyn Ferral notes that Michels’ construction company did indeed oppose the 2015 “right to work” bill that Walker signed. Ferral adds that some of Michels’ employees were part of the demonstrations against the law, and that one even got time off from work in order to protest.

Michels’ campaign now insists he supports Walker’s stance, and that “he never specifically encouraged or granted time off for Michels employees to protest for or against anything, including right-to-work.” Kleefisch’s team, though, was hardly appeased, saying in response, “Republican voters have a choice: Do we want a governor like Rebecca who stands up to the liberal protesters—or Tim Michels who gave his employees time off to join the protests against conservative reform?” A recent Marquette Law School poll showed Michels with a tiny 27-26 edge over Kleefisch in the race to take on Democratic incumbent Tony Evers, so it’s unlikely she’s going to let this matter rest over the next month.

Michels got some more welcome news on Friday when former Gov. Tommy Thompson, who mulled a comeback bid earlier this year, endorsed him. Thompson, unlike Trump, had a reputation for working with Democrats during his record-setting tenure from 1987 to 2001, but he argued that their mutual support for Michels shows the candidate can appeal to different factions in the GOP.

P.S. Now that Thompson and Walker have each come down on opposite sides, the only surviving GOP governor who hasn’t yet made an endorsement is Scott McCallum, who took over after Thompson left to join George W. Bush’s cabinet. McCallum, though, hasn’t been on the ballot since he lost his 2002 campaign for a full term to Democrat Jim Doyle, a campaign where Thompson’s brother, Ed Thompson, grabbed a crucial 10% as the Libertarian nominee.

Abrams, though, won’t have to worry much about money as she wages her second campaign against Kemp. The Democrat announced Friday that her campaign raised $9.8 million from May 1 to June 30 while her allied leadership committee, which is not subject to contribution limits, hauled in another $12.3 million. The two bodies, which are allowed to coordinate, ended last month with a combined $18.5 million on-hand, which is more than twice the $7 million that Kemp’s side had available.

Amanda Carpenter: “Herschel Walker is, by any measure, a flawed candidate. It’s a fact readily observable to anyone with a basic familiarity with his confessed history of self-harm, acts of violence against others, whack-a-doodle beliefs, and steady stream of lies about his supposed academic and business achievements.”

“Walker was audacious enough to lie to his aides about the secret children he fathered, even when they confronted him with irrefutable evidence of paternity.”

“But what those aides did in response is telling: They didn’t quit. Instead, they vented to the Daily Beast about what a ‘pathological liar’ Walker is and how the campaign is ‘like a shitshow on a train in the middle of a wreck.’ Anonymously, of course.”

MISSOURI U.S. SENATOR. Show Me Values, which has now spent $2.1 million against disgraced former Gov. Eric Greitens in the Aug. 2 GOP primary, is airing a commercial that consists entirely of a narrator reading his ex-wife’s affidavit alleging that he abused one of their children. The narrator quotes Sheena Greitens saying that the candidate was responsible for “cuffing our then three-year-old son across the face … yanking him around by his hair … a swollen face, bleeding gums, and [a] loose tooth.”

HAWAII GOVERNOR. Rep. Kai Kahele got some much-needed good news in late June when he earned the support of the United Public Workers union, which the Honolulu Star-Advertiser says represents 11,000 people in the state, for the Aug. 13 Democratic primary. But Lt. Gov. Josh Green, who has enjoyed a huge advantage in polling, fundraising, and endorsements, around that same time earned the backing of the state AFL-CIO, whose affiliates represent 68,000 workers.

KENTUCKY GOVERNOR. Rep. James Comer definitively took himself out of contention for next year’s Republican primary by telling WHOP News there was “zero chance” he would run.

MARYLAND GOVERNOR. Author Wes Moore has released a new commercial for the July 19 Democratic primary narrated by none other than Oprah Winfrey, who declares that he’s the “different type of leader” the moment demands. “Wes watched his father die at age three,” Winfrey tells the audience, “but instead of letting that defeat him, he found a way to thrive” as a Rhodes Scholar, Army captain, and “CEO of one of the nation’s largest anti-poverty organizations.”

“A left-wing group that worked in 2020 to persuade progressives to support President Joe Biden is now preparing to turn on him, with plans to launch a public pressure campaign to block his renomination in 2024,” Politico reports.

“The effort, by RootsAction.org, is the latest sign of unrest among Democrats about Biden, whose job approval rating has cratered during a punishing midterm election year.”

Even if you think Biden shouldn’t run again, it’s pretty shortsighted to do this before the 2022 midterms.