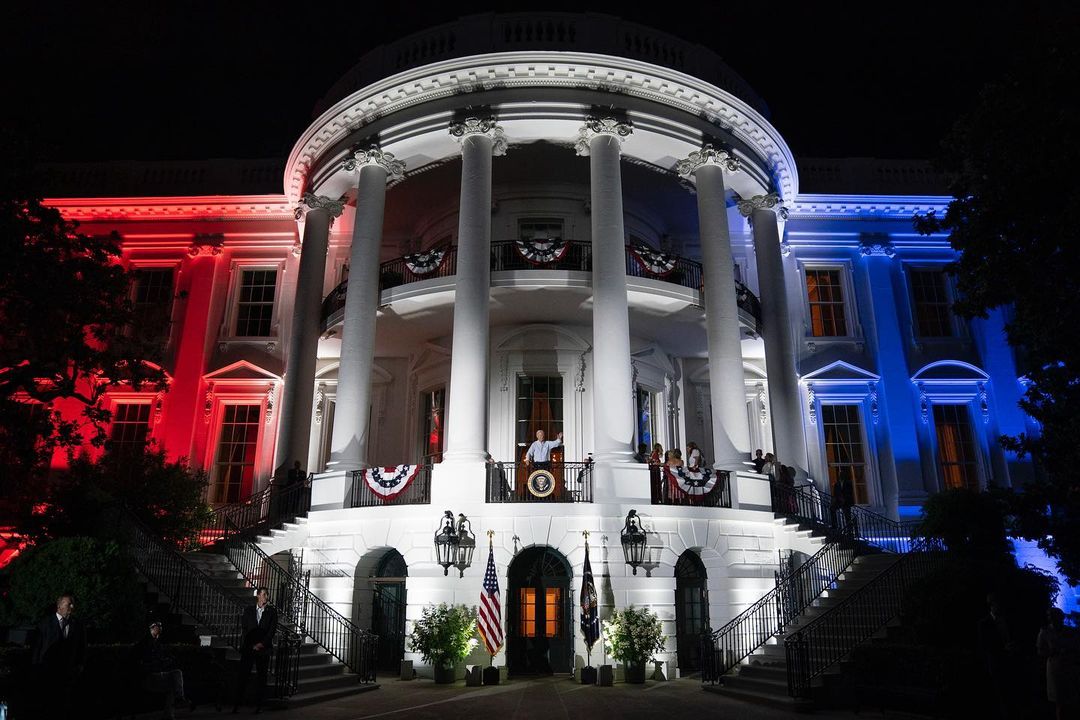 “Former Trump White House counsel Pat Cipollone appeared before the House Jan. 6 committee for an interview Friday and has been willing to answer the panel’s questions,” NBC News reports.

Said a source: “He’s been a cooperative witness within the parameters of his desire to protect executive privilege for the office of general counsel.”

“Cipollone spent over eight hours meeting with the Jan. 6 select committee, emerging Friday without commenting on his cooperation,” Politico reports.

“The House committee investigating the insurrection at the US Capitol is considering a second televised hearing next week, this one in prime time on Thursday,” Bloomberg reports.

“Panel members previously have described plans for a final hearing to focus on 187 minutes it took then-President Donald Trump to tell rioters to leave the Capitol grounds and go home that day.”

“The Justice Department released new details Friday evening of the alleged extensive planning by the Oath Keepers to prepare for violence in Washington, DC, on January 6, 2021, including lessons to conduct ‘hasty ambushes,’ a ‘death list’ of Georgia election officials and attempts to acquire homemade firearms,” CNN reports.

Stewart Rhodes, the leader of the Oath Keepers, wants to testify publicly at the next January 6 Committee hearing, answering all questions and waiving his 5th Amendment rights, provided his testimony is broadcast live, the New York Times reports.

Roger Stone was followed by a documentary film crew before the January 6 Capitol attack — that also recorded key moments in timeline, including ‘rehearsal’ rallies and the days leading up to the riot, The Guardian reports.

“Former President Donald Trump is considering sending a letter to Stephen Bannon saying that he is waiving executive privilege, potentially clearing the way for his former chief strategist to testify before the House select committee investigating the pro-Trump riot at the Capitol,” the Washington Post reports.

“The letter would reiterate that Trump invoked executive privilege in September 2021, when Bannon was first subpoenaed by the House committee. But it would say that the former president is now willing to give up that claim if Bannon can reach an agreement on the terms of an appearance before the panel.”

“Some advisers were seeking to talk Trump out of signing the letter.”

Of course, there was no executive privilege in the first place.

“Heavily armed police on Friday swarmed around the Capitol Hill rowhouse where former Trump White House adviser Stephen Bannon lives after receiving a false report that a man with a gun was inside and had shot someone,” the Washington Post reports.

“A lawyer for Steve Bannon is seeking to withdraw from representing the adviser to former President Donald Trump in his criminal contempt case, citing the possibility of being called as a witness at trial,” Reuters reports.

“Bannon was charged last year with two counts of contempt of Congress for defying a subpoena issued by a House of Representatives committee investigating the Jan. 6, 2021, attack on the U.S. Capitol by Trump supporters. Bannon has refused to provide testimony or documents, citing Trump’s claim – rejected by other courts – that the material is protected under a legal doctrine called executive privilege.”

“The White House is warning individuals to be ‘really careful’ when using phone apps that track users’ menstrual cycles over fears that the data could be used against them if they seek abortions following the Supreme Court’s decision to overturn Roe v. Wade,” CNN reports.

“What we’re witnessing wasn’t a constitutional judgment, it was an exercise in raw political power. We cannot allow an out of control Supreme Court, working in conjunction with extremist elements of the Republican party, to take away freedoms and our personal autonomy.” — President Biden, quoted by Reuters, while signing an executive order to protect access to abortion services.

“Louisiana can now enforce its ban on almost all abortions under a judge’s order issued Friday amid a flurry of court challenges to state ‘trigger’ laws crafted to take effect when the U.S. Supreme Court overturned Roe v. Wade,” the AP reports.

Elon Musk says he is terminating his agreement to buy Twitter because the company “is in material breach of multiple provisions of that agreement” and appears to have made “false and misleading representations” when entering into the agreement, the Wall Street Journal reports.

“Elon Musk’s deal to buy Twitter is in serious jeopardy, as Musk’s camp concluded that Twitter’s figures on spam accounts are not verifiable,” the Washington Post reports.

“Musk’s team has stopped engaging in certain discussions around funding for the $44 billion deal, including with a party named as a likely backer.”

“The Congressional Budget Office found on Friday that a revised drug pricing plan eyed by Senate Democrats as part of their party-line social spending plans would bring in $287 billion in revenue over 10 years. That’s a big chunk of what they’re hoping to accomplish through their push,” Politico reports.

“That comes on the heels of a plan from Democrats to boost a 3.8 percent surcharge on investment income as part of the package, which leaders think could raise $200 billion in revenue.”

Barton Gellman: “He has baffled old comrades with his transformation since being fired as director of the Defense Intelligence Agency in 2014. He led chants to lock up Hillary Clinton in 2016. In 2020, he posted a video of himself taking an oath associated with QAnon. He has endorsed crackpot fabrications of the extreme right: that Italy used military satellites to switch votes from Trump to Biden in 2020, that Covid-19 was a hoax perpetrated by a malevolent global elite, that the vaccine infused recipients with microchips designed for mind control.”

“Has Flynn always been susceptible to paranoid conspiracies? Or did something happen along the way that fundamentally shifted his relationship to reality? In recent conversations with the former general’s close associates, some for attribution and some not, they offered a variety of theories.”

“Michael Flynn, the retired Army general and onetime adviser to President Donald Trump, was cited by the Defense Department inspector general for failing to disclose lucrative speaking engagements and other business arrangements with foreign entities, prompting the U.S. government to pursue tens of thousands of dollars in penalties against him,” the Washington Post reports.

“Investigators determined that Flynn received nearly $450,000 from Turkish and Russian interests in 2015, including for an appearance in Moscow alongside President Vladimir Putin, but found no records that he had sought government approval beforehand.”

Said Greene: “Here’s what I have to say. I mean. Two shootings on July 4: one in a rich white neighborhood and the other at a fireworks display. It almost sounds like it’s designed to persuade Republicans to go along with more gun control. I mean, after all, we didn’t see that happen at all the pride parades in the month of June.”

“There were over 1 million opportunities for someone to buy a gun from a licensed dealer without a completed background check in 2020 and 2021,“ NBC News reports.

“In all, 1,002,274 background checks — or 4.2 percent — took longer than three business days in 2020 and 2021, a higher share than any other period since at least 2014… After the third business day, federal law allows dealers to sell weapons while the background check is still pending, which potentially puts weapons in the hands of people who can’t legally own a gun because of mental illness or their criminal history.”

NBC News: “Interviews with more than a dozen White House officials and others close to the administration say that a Harris staff shake-up has led to a closer relationship with those in the West Wing, contributing to greater involvement in the White House’s response at key moments. While Harris’ previous chief of staff had participated in senior staff and strategy meetings, the vice president’s new chief of staff, Lorraine Voles, was added to a separate daily meeting of Biden’s closest advisers at Harris’ request.”

“Harris herself has had a weekly one-on-one with chief of staff Ron Klain, who had served as chief of staff to Vice President Al Gore and Biden himself, since the start of the administration.”

“With Russia’s military action in Ukraine in its fifth month, Russian President Vladimir Putin on Thursday warned Kyiv that it should quickly accept Moscow’s terms or brace for the worst, adding ominously that Russia has barely started its action,” the AP reports.

Said Putin: “Everybody should know that largely speaking, we haven’t even yet started anything in earnest.”

The he added a warning for Western countries helping Ukraine: “We are hearing that they want to defeat us on the battlefield. Let them try.”

“Sens. Lindsey Graham (R-S.C.) and Richard Blumenthal (D-Conn.) traveled to Kyiv on Thursday and met with Ukrainian President Volodymyr Zelenskyy, in what is believed to be the first bipartisan congressional delegation to Ukraine since the war began,” Politico reports.

“Protesters in Sri Lanka entered the president’s residence and his office on Saturday, as thousands descended on the capital, Colombo, to register their growing fury over his government’s inability to address a crippling economic crisis,” the New York Times reports.

Cindy McCain said the Republican Party has lost its way and that her late husband, former Sen. John McCain (R-AZ), would be pushing back if he were still alive, The Hill reports.

Said McCain: “I don’t believe my husband would recognize it.”

“The U.S. president’s sensitive trip will test his ability to reset relations with Saudi Arabia’s powerful crown prince, who he previously denounced as a pariah.”

“Gov. Greg Abbott (R) cleared state authorities to return migrants they apprehend to the border, setting up a potential clash with the federal government over the authority to enforce immigration law,” the Texas Tribune reports.

“Immigration law enforcement is a federal responsibility. Abbott appears to be testing the limits of state authority by empowering state law enforcement and National Guard troops under state deployment to bring migrants to the ports of entry — stopping short of using state resources to expel migrants from the country, as immigration hawks have increasingly called for in recent months.”

“Some 40,000 National Guard and 22,000 Reserve soldiers who refused to be vaccinated against COVID-19 are no longer allowed to participate in their military duties, also effectively cutting them off from some of their military benefits,” Military.com reports.

Jimmy and Rosalynn Carter quietly celebrated their 76th wedding anniversary, “a milestone that is so rare that the U.S. Census Bureau doesn’t keep statistics on how many couples make it that far,” the Atlanta Journal Constitution reports.

“As Donald Trump continues to hint at running for the US Presidency in 2024, his son has announced that his VIP Boeing 757 private jet is back after an extensive refit,” Insider reports.

Renato Mariotti: “This indicates that Joel Greenberg has wrapped up his cooperation against Matt Gaetz and others. It could mean two things: 1) Prosecutors don’t need him to testify at trial against Gaetz. 2) Prosecutors don’t plan to charge Gaetz. Unlikely that they move forward otherwise.”

“Mr. McMahon’s wife, Linda McMahon, helped build the company and was WWE’s chief executive until she stepped down in 2009 for the first of two unsuccessful campaigns for the Senate. She served as head of the Small Business Administration under former President Donald Trump.”

Politico: “Foreign ministers of the G20 countries, who are meeting on the Indonesian island of Bali this week, did not take a customary group photo, after several Western leaders reportedly refused to be pictured with Russia’s Sergey Lavrov over his country’s invasion of Ukraine.”

New Yorker writer Ken Auletta has a new biography about Harvey Weinstein, the disgraced movie executive and sexual predator, but he tells the New York Times the most evil person he ever met was Roy Cohn: “He was the worst human being I’ve ever met. No one even close.”  Roy Cohn once said Donald Trump called him 15 to 20 times a day.

Bill Nye — “The Science Guy” — told the Aspen Ideas Festival that the main says the main thing you can do about climate change isn’t recycling — it’s voting.  Said Nye: “To be sure, recycling the bottles, don’t throw the plastic away [and] compost your compostable things … Start there. But if you want to do one thing about climate change: Vote.”