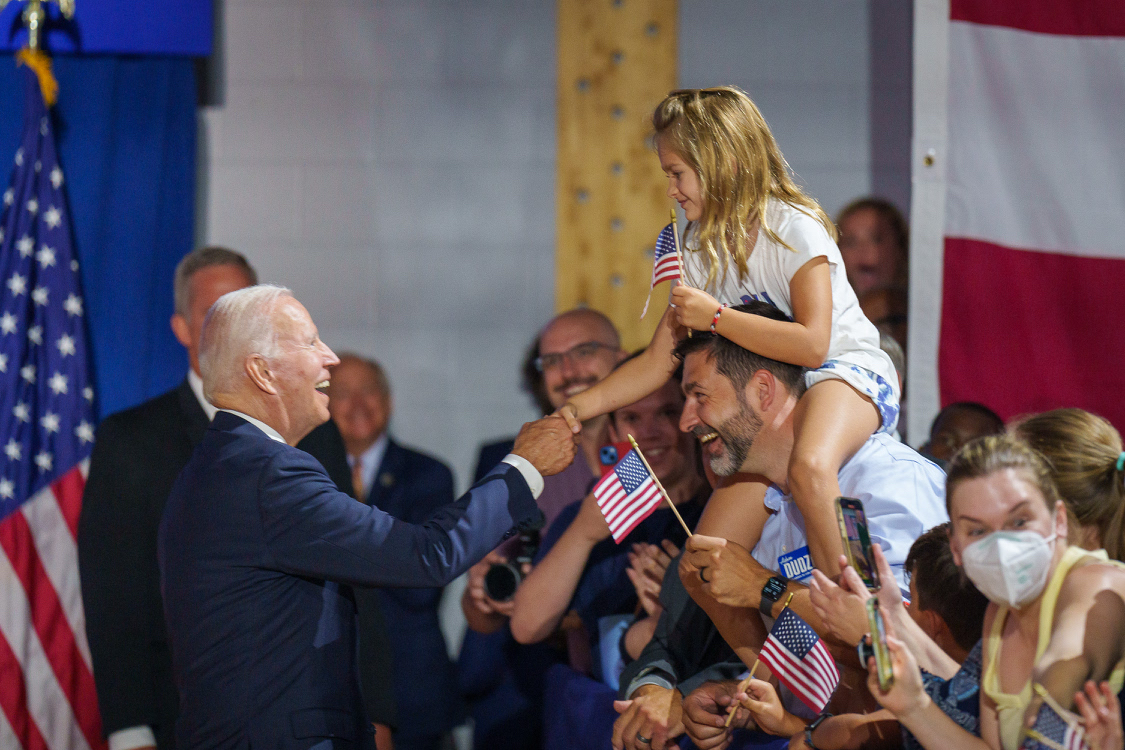 Arizona and New Hampshire hold their primaries on Aug. 2 and Sept. 13, respectively, so it will be a while before either Kelly or Hassan knows who they’ll be facing in the general election.

GEORGIA U.S. SENATOR. It turns out that GOP Senate nominee Herschel Walker (GA), who’s lied about everything from his academics to his business ventures to weird things like working for the FBI, hasn’t spared his own campaign staffers from his perpetual lying – to the point where they actually can’t believe anything he says anymore, according to the Daily Beast.

For one thing, Walker didn’t tell his own campaign about his three secret kids, an advisor told the Daily Beast.

And Walker’s campaign is reportedly secretly investigating yet another allegation of a secret child behind the candidate’s back, having learned at this point that he clearly can’t be trusted to tell the campaign himself.

And the Daily Beast reported that three people the outlet spoke to all independently described the candidate as a “pathological liar.”

“A campaign’s worst nightmare. Like a shitshow on a train in the middle of a wreck.” — A source inside Herschel Walker’s U.S. Senate campaign, quoted by the Daily Beast, on the candidate’s repeated lying.

FLORIDA 1ST CD. Air Force veteran Bryan Jones announced this week that he was dropping out of the Aug. 23 Republican primary and endorsing former FedEx executive Mark Lombardo’s bid to deny renomination to incumbent Matt Gaetz. Lombardo, who has pledged to self-fund $1 million, is also airing another commercial highlighting the ongoing federal investigation into the congressman. “He got himself entangled into a child sex trafficking investigation,” Lombardo says of Gaetz, “and he was the only vote against an anti-sex slavery bill that Trump signed into law.”

Gaetz is going negative himself with a spot Punchbowl writes “sounds like it was taped in a basement,” though he doesn’t actually bother to mention anyone by name. Instead, Gaetz tells the audience, “One of my Republican primary opponents says he supports a pathway to citizenship for illegal aliens. That’s insane, I never will.”

OHIO 9TH CD. Info Strategies Northeast, a new firm affiliated with the conservative consulting group Knight Takes Rook, has released a poll showing veteran Democratic Rep. Marcy Kaptur beating QAnon-aligned activist J.R. Majewski 47-42 in a seat that Trump would have taken 51-48. This survey, which was not done on behalf of any candidate, is the first we’ve seen of this contest, as well as the firm’s second-ever poll: Its inaugural effort was a late May look at the GOP primary for South Carolina’s 1st District that showed incumbent Nancy Mace ahead 44-39 two weeks before she won 53-45.

MARYLAND 4TH CD. Jewish Insider’s Gabby Deutch has obtained a month-old Change Research poll apparently commissioned by former Rep. Donna Edwards’ allies at the League of Conservation Voters, and it shows former Prince George’s County State’s Attorney Glenn Ivey leading her 33-28 in the July 19 Democratic primary. The only other survey we’ve seen was a May Edwards internal from Lake Research Partners that put her ahead 31-18; Deutch notes that both polls were done before AIPAC spent $2.5 million against the former congresswoman.

NEW YORK 10TH CD. New York City Councilwoman Carlina Rivera has picked up the support of 1199 SEIU, which is one of the most powerful labor organizations in city politics, for the packed Aug. 23 Democratic primary. As Politico notes, the healthcare workers union proved vital in helping one of Rivera’s current rivals, Bill de Blasio, win the 2013 primary for mayor.

VERMONT AT LARGE CD. State Sen. Becca Balint obtained one of the highest-profile endorsements available in Vermont politics when Sen. Bernie Sanders announced Wednesday that he was supporting her in the Aug. 9 Democratic primary.

Inside Elections’ Jacob Rubashkin shares a commercial airing in the Wichita market, which is home to 42% of the state’s residents and supported Trump 65-33 in 2020, that does not mention abortion at all. Instead, the narrator frames the ballot measure as “a strict government mandate designed to interfere with private medical decisions,” a statement followed by images reminding viewers of pandemic face mask requirements and the cancellation of in-person religious services.

The “no” campaign is adopting a more direct strategy in the Kansas City media market, though, where Biden won 53-45 in the portion covering Kansas. (The balance is in Missouri.) This spot features a mother telling the audience that she needed an abortion in order to remain alive for her husband and three-year-old son, and that the ballot measure “could ban any abortion with no exceptions, even in cases like mine.” The Kansas City market includes another 32% of the state.

OREGON REFERENDUM. On Tuesday, Oregon officials certified that a proposed constitutional amendment supported by Democratic-aligned labor groups to curb Republican quorum-busting tactics would appear on this November’s ballot. Oregon requires two-thirds of lawmakers be present in order to conduct any legislative business, making it one of just five states that require a supermajority for a quorum instead of a simple majority. In 2019 and 2020, the Republican minority had begun frequently walking out of legislative sessions in order to deny Democrats the quorum needed to pass a variety of legislation on climate change, gun safety, and other topics.

Rather than just lowering the quorum requirement to a simple majority, this initiative would prevent any lawmaker from running again in the next election if they had 10 or more unexcused absences in a legislative session, though disqualified lawmakers would be eligible to run again after sitting out the single term for which they were barred from running. Supporters are likely betting that this proposal would be more popular and easier for voters to understand than trying to outright change the quorum threshold, though there’s no guarantee that it would fully prevent future quorum busting efforts.

There are just under four weeks to go before her Aug. 2 Republican primary battle against former TV anchor Kari Lake. Lake, like her main supporter Donald Trump, is no fan of the governor, whom she’s blamed for not overturning Joe Biden’s win.

MICHIGAN GOVERNOR. Conservative radio host Tudor Dixon has earned an endorsement for the Aug. 2 GOP primary from former Gov. John Engler, whose service from 1991 to 2003 makes him Michigan’s last three-term chief executive. (The state passed a constitutional amendment in 1992 limiting its governors to a pair of four-year terms, but Engler was exempt as the sitting incumbent.) Engler last year signed on as treasurer for a group supporting former Detroit Police Chief James Craig called “We Need the Chief,” but the former governor evidently decided he doesn’t actually need the chief’s write-in campaign.

Associated Press: “A leading contender for the Republican nomination for governor in Michigan was sued in the 1990s, accused of using racial slurs about Black people in the workplace and sexually harassing his employees.”

“One of his rivals pleaded not guilty in federal court on Thursday to misdemeanor charges after authorities said he rallied Donald Trump’s supporters to storm the U.S. Capitol during the Jan. 6 insurrection.”

“Ryan Kelley, a Republican candidate to be Michigan’s next governor, pleaded not guilty Thursday to four misdemeanor charges tied to his alleged actions during the Jan. 6, 2021, riot at the U.S. Capitol,” the Detroit News reports.

Another candidate is a chiropractor and self-help guru who hawked supplements he falsely claimed treated COVID-19.”

“And even the contender who has garnered mainstream support had an ‘admittedly lame’ hobby acting in low-budget horror pictures, one of which included a zombie biting off a man’s genitals.”

Said Vance: “There’s something comparable between abortion and slavery, and that while the people who obviously suffer the most are those subjected to it, I think it has this morally distorting effect on the entire society.”

He added: “I really think abortion has really done something very socially destructive to us as people in how we see the most vulnerable and the most dependent among us. I think that’s one of the under-appreciated facts about abortion. It’s really distorted our entire society.”

PENNSYLVANIA U.S. SENATOR. John Fetterman (D) accused Mehmet Oz (R) of filming an ad for his Pennsylvania U.S. Senate campaign at his “mansion” in New Jersey — which was featured two years ago in People magazine.

Insider: “In particular, both the campaign video and the one shot by People appear to feature bookcases with the same rope-like pattern between the shelves, with both also featuring blue-and-white ceramic vases and golden candlestick holders.”

Politico: “Mehmet Oz is trailing in polls. A key Republican has yet to endorse him since the celebrity doctor won the GOP nomination for Pennsylvania Senate more than a month ago. And Oz has gone dark on the airwaves since May 21 — even as his Democratic rival John Fetterman burnishes his brand on TV as a political outsider, and paints Oz as a carpetbagger from New Jersey.”

“This is not the general election kickoff in a pivotal Senate race that Republicans were hoping for.”