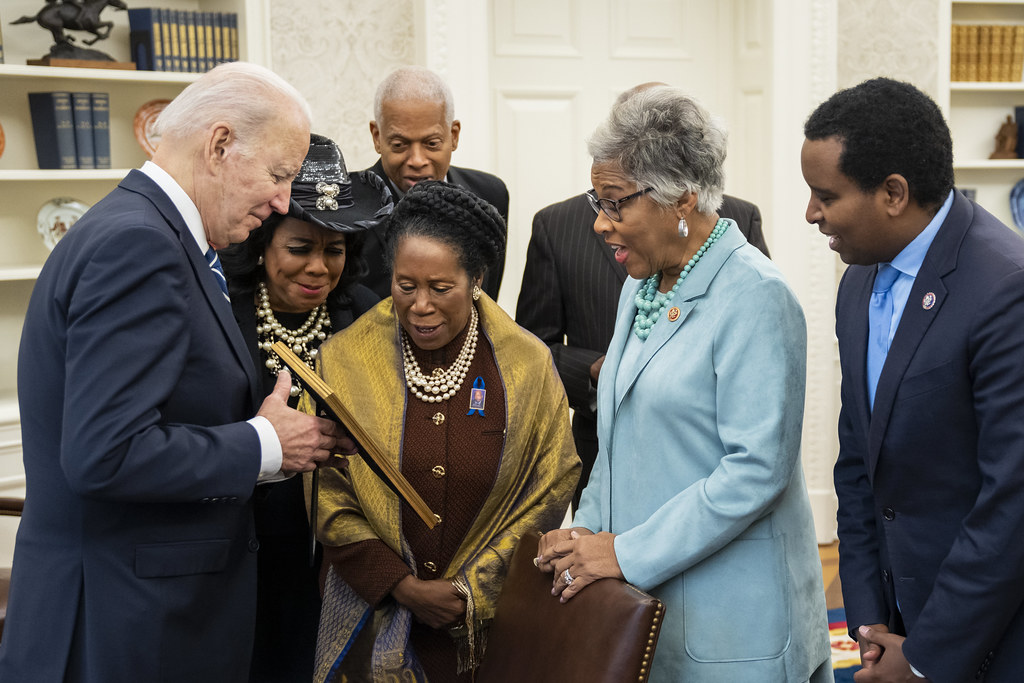 There have now been 9 generic congressional ballot polls since the Supreme Court overturned Roe v. Wade and their average shows Democrats leading by 45.4% to 43.7% lead or 1.7 percentage points.  If you take out the Rasmussen polls, Democrats hold a 2.5 percentage point lead.

Looking at this data, Simon Rosenberg concludes the race has shifted 4 to 5 percentage points towards the Democrats in just a couple of weeks.

Perhaps more important, this trend was mirrored in an actual special House election last week in Nebraska. The Democratic candidate lost the race by only 6.4 percentage points in a district Donald Trump won by 14 points.

With the big caveat that it’s still very early, this suggests the 2022 midterms could be more competitive than predicted.

Inflation and the economy are still big hurdles for Democrats but extremism on issues like abortion and guns while defending an insurrection isn’t helping Republicans.

Forty-one percent approve of the court’s decision, including 25% who strongly approve.

William Saletan: “The Court issued its ruling on the morning of June 24. In a CBS News/YouGov survey taken on June 24 and 25, 50 percent of Democrats said the Court’s decision to overturn Roe made them more likely to vote in the midterms. Among Republicans, the number was only 20 percent. A Marist/NPR/PBS poll found almost the same gap: by 24 percentage points, Democrats were more likely than Republicans to say that Court’s ruling increased their inclination to vote.”

“Many Republicans were already eager to vote based on other issues, chiefly inflation. So perhaps their enthusiasm didn’t have much room to grow. Still, they could have indicated that the abortion ruling would add to their motivation. They didn’t. And that makes sense, because voters tend to be mobilized by anger, not satisfaction. The simplest explanation for the partisan gap in polls is that Dobbs has alarmed pro-choice voters, not pro-life voters.”

ARIZONA U.S. SENATOR. “Blake Masters, a Republican candidate for the Senate in Arizona who won the endorsement of former President Donald Trump, has been dogged by a trail of youthful writings in which he lamented the entry of the United States into the First and Second World Wars, approvingly quoted a Nazi war criminal and pushed an isolationism that extended beyond even Mr. Trump’s,” the New York Times reports.

MICHIGAN GOVERNOR. “The four leading contenders in Michigan’s GOP primary for governor professed loyalty to former President Donald Trump at a debate Wednesday night while promoting debunked conspiracy theories that the 2020 election was stolen from him,” NBC News reports.

GEORGIA U.S. SENATOR. “When Herschel Walker’s campaign aides approached him this winter to discuss whispers that Walker had a secret child, the Georgia GOP’s Senate candidate told his campaign the rumors were false,” the Daily Beast reports.

“They had expected him to lie, and had obtained documents in advance of that conversation verifying that Walker did indeed have another child… They handed the documents to him, and after some more back and forth, Walker finally admitted it was true. His aides asked if there were any other children they needed to know about. Walker insisted this was it.”

Said a campaign adviser: “He’s lied so much that we don’t know what’s true.”

In his first TV ad of the general election, Herschel Walker acknowledges the existence of several more previously undisclosed family members: “Georgia is my family,” says the former NFL star, who confirmed last month that he had three secret children. “The United States is my family. So I’m going to fight and take care of them.” The spot is airing for a reported $1.6 million as part of a joint buy with the NRSC over the next two weeks.

GOP 2024. Florida Gov. Ron DeSantis (R) “is planning a private fundraiser in Utah later this month that is expected to draw some of the country’s wealthiest Republican donors as he signals a possible run for president in 2024,” CNBC reports.

A Reuters analysis of Florida Gov. Ron DeSantis’ (R) social media ads “shows he has dramatically expanded his out-of-state ads in recent months, an indicator, say some political analysts, that he may be laying the groundwork for a national campaign.”

“He has always loved embarrassing and humiliating people. I’m speaking for others — he was the biggest dick we knew.” — A college baseball teammate of Florida Gov. Ron DeSantis (R), quoted by the Washington Post.

Sen. Tim Scott (R-SC), up for reelection this year and considered a potential 2024 presidential candidate, is running direct-to-camera television ads in Nevada and in Georgia at a cost of nearly $2 million to boost his party’s candidates for Senate in those closely-watched races, Politico reports.

“Trump is too narcissistic and ill to be a successful fascist even though he has all those instincts. And I think he’ll be easier to beat than any of the other potential candidates.” — Former Vermont Gov. Howard Dean (D), on MSNBC on the 2024 presidential race.

PENNSYLVANIA U.S. SENATOR. “As it nears two months since he suffered a stroke, Pennsylvania Lt. Gov. John Fetterman, the Democratic nominee in one of the country’s most important U.S. Senate races, is signaling that a return to the campaign trail may not be too far away,” the Pittsburgh Post-Gazette reports.

Said a campaign spokesman: “He is about 90% back to full strength and getting better.”

Another 6%, meanwhile, goes to former Rep. Matt Salmon, whose name remains on the Aug. 23 ballot even though he dropped out of the race last week and endorsed Robson. When respondents were asked how they’d vote “if Matt Salmon was not in the race,” Lake’s margin of victory shrinks to 40-35. The other two candidates, businesswoman Paola Tulliani Zen and Some Dude Scott Neely, barely register in either scenario.

This is the first poll we’ve seen conducted since Salmon quit the race, though the former congressman now has released a survey conducted just prior to his exit that shows an even tighter contest between Lake and Robson. Moore Information Group in fact gave Robson a tiny 38-37 edge when they were the only two contenders named, though another 11% opted for “Neither.”

Lake, like countless anti-LGBTQ candidates across the nation, has targeted drag performances as “grooming” and “child abuse.” In response, a prominent Phoenix drag queen named Richard Stevens posted on social media that he and the candidate had been friends for 20 years and that “I’ve performed for Kari’s birthday, I’ve performed in her home (with children present,) and I’ve performed for her at some of the seediest bars in Phoenix.” He continued, “She’s come to my parties and has been asked to leave because door people thought she was too intoxicated to remain on premises.”

Stevens also shared several photos of Lake posing with him while he was in drag, including one picture where Lake herself was costumed as Elvis; the Washington Post further noted that the candidate’s own Instagram feed showed Lake at one of his shows. Lake’s campaign responded by acknowledging that she did attend a party about eight years ago where her now-former friend Stevens was dressed as a woman. However, she put out a statement arguing that “the performer was there as a Marilyn Monroe impersonator” and that the event “wasn’t a drag show.” It is not clear what distinction between the two Lake might have been drawing.

When Lake herself appeared on Fox News in late June, she did not get the friendly treatment she may have been expecting. “I’m actually appalled that Fox News would take a defamatory story like that, and we are pursuing legal action against this drag queen,” Lake told host Bret Baier after he asked her about the story. “I’m appalled that you would bring that up when you have not talked about our stolen election.”

Baier continued by questioning Lake about her photos with Stevens, to which she responded, “Somebody who goes to a drag show with female impersonators is one thing. We don’t want our tax money going into drag shows at school.” Afterwards, Lake tweeted out a clip of the interview while trying to bring the focus back on the Big Lie, writing, “The Corrupt Media REFUSES to talk about the biggest story of our lifetime: a STOLEN election. Instead they try to divert our attention to meaningless stories… I will never let them.”

HAWAII GOVENROR. MRG Research, polling on behalf of Civil Beat and Hawaii News Now, gives Lt. Gov. Josh Green a hefty 48-16 lead over Kai Kahele in the Aug. 13 Democratic primary, with businesswoman Vicky Cayetano taking 15%. This is the first survey we’ve seen since former Honolulu Mayor Kirk Caldwell exited the race in May just before Kahele jumped in, but older polls also found Green with a huge advantage in the contest to succeed his fellow Democrat, termed-out Gov. David Ige.

MARYLAND GOVERNOR. Two rival candidates have each released late June internals that show a tight July 19 Democratic primary, though they disagree on who is ahead.

Garin-Hart-Yang, surveying for author Wes Moore, has state Comptroller Peter Franchot edging him out just 21-20, with former DNC chair Tom Perez at 16% as former U.S. Secretary of Education John King lags in fourth with just 5%. Back in May, GHY pegged Franchot’s lead at 19-13 as former Prince George’s County Executive Rushern Baker took 11%. Baker suspended his campaign in June but remains on the ballot, and Maryland Matters notes that this new survey did not include his name as an option.

King’s team, though, has publicized their own numbers from 20-20 Insight that give Perez a 22-18 advantage over Moore, with King at 17%. Franchot, who has held the advantage in every other poll that’s been released this year, is in fourth with 15%, as former Attorney General Doug Gansler takes only 4%; this survey also does not appear to have tested Baker. The firm’s May numbers had Franchot at 17% as King and Moore each took 16%, but no other pollster has shown King escaping single digits.

WISCONSIN GOVERNOR. Businessman Kevin Nicholson announced Tuesday evening that he was dropping out of the Aug. 9 Republican primary, with the former College Democrats of America president arguing, “It has become clear to me and my team the only path forward for our campaign is attacking the other candidates in the race on the airwaves and running a very negative campaign.” That may not have turned things around for Nicholson either, though, as a mid-June Marquette University poll showed him badly trailing the two frontrunners, wealthy businessman Tim Michels and former Lt. Gov. Rebecca Kleefisch.

TEXAS GOVERNOR. YouGov’s new survey for the University of Texas shows Republican incumbent Greg Abbott leading Democrat Beto O’Rourke 45-39, which is a similar margin to the governor’s 49-41 edge in a different YouGov poll for CBS.

“Democratic House campaigns in battleground districts across the country have seen a surge of donations — and new donors — in the wake of the Supreme Court’s decision last month overturning Roe v. Wade,” Axios reports.

“The sudden influx is a bright spot for Democrats in what has otherwise been a difficult campaign marked by rising inflation and costs, potentially validating a strategy of focusing more heavily on abortion on the campaign trail.”

“I don’t think this alters the midterm advantage for Republicans because of Biden’s economic woes. But in a cycle that is all about turnout, it is a net benefit for Democrats. Angry voters vote.” — Former Rep. Tom Davis (R-VA), quoted by NBC News, on the impact of abortion politics in this year’s midterm elections.

Karl Rove: “It’ll help Democrats if their Republican opponents say intemperate-to-insane things ill-suited for a general election. The other possible aid for Democratic candidates is Mr. Trump. If he announces a 2024 presidential bid before November—as is rumored—it’ll make the midterms a referendum on the former president when they should be a referendum on Mr. Biden’s policy failures and leadership shortcomings.”

KY-Gov: Quarterly fundraising numbers are in for the Republicans competing to take on Democratic Gov. Andy Beshear in 2023:

Beshear himself outpaced all his rivals combined by raising $1.1 million and ending June with $3.2 million to spend.