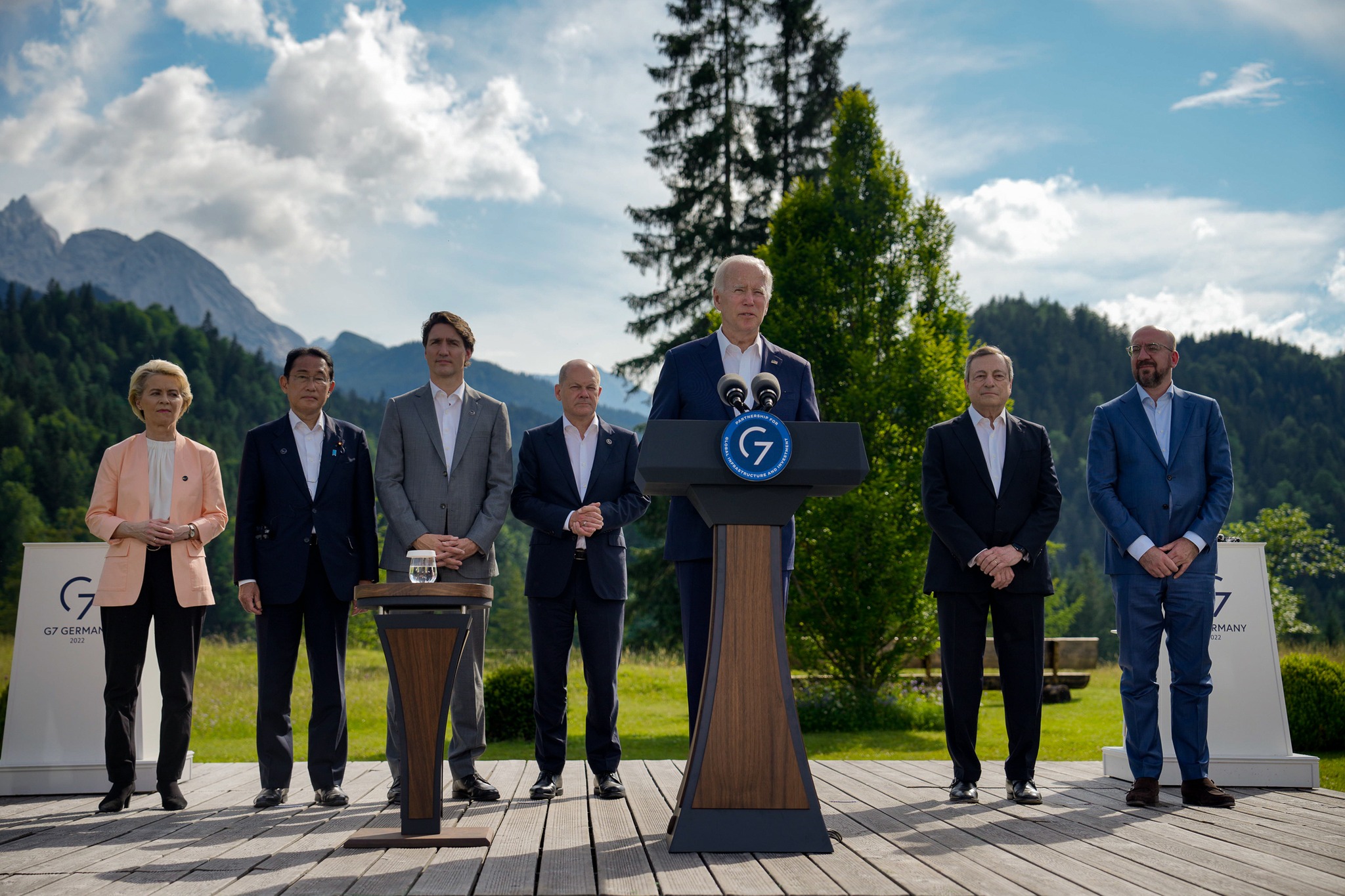 “At least six people were dead, 31 were hospitalized and a gunman was at large Monday afternoon after shooting Fourth of July paradegoers from a roof in this Chicago suburb,” the Washington Post reports.

“Video from the scene appeared to show blood pooled on the sidewalk and police talking to people in downtown Highland Park. Others showed the chaos while loud bangs could be heard on the downtown street where chairs, toys and blankets were strewn.”

This is the country Republicans want. Mass Shootings Everyday Everywhere.

“He was not speaking metaphorically. It was not an offhand comment. President Donald Trump had every intention of joining a mob of supporters he knew to be armed and dangerous as it marched to the Capitol. And there had even been talk of marching into the House chamber himself to disrupt Congress from ratifying his election defeat,” the New York Times reports.

“For a year and a half, Mr. Trump has been shielded by obfuscations and mischaracterizations, benefiting from uncertainty about what he was thinking on Jan. 6, 2021. If he truly believed the election had been stolen, if he genuinely expected the gathering at the Capitol would be a peaceful protest, the argument went, then could he be held accountable, much less indicted, for the mayhem that ensued?”

“But for a man who famously avoids leaving emails or other trails of evidence of his unspoken motives, any doubts about what was really going through Mr. Trump’s mind on that day of violence seemed to have been eviscerated by testimony presented in recent weeks by the House committee investigating the Capitol attack — especially the dramatic appearance last week of a 26-year-old former White House aide who offered a chilling portrait of a president willing to do almost anything to hang onto power.”

“More evidence is emerging in the House’s Jan. 6 investigation that lends support to recent testimony that President Donald Trump wanted to join an angry mob that marched to the Capitol where they rioted,” the AP reports.

Former President Donald Trump admitted Saturday that he’s the one “on trial” in the dramatic televised hearings being held by the House select committee investigating the Jan. 6, 2021, insurrection, the HuffPost reports.

New York Times: “If Washington is focused on the criminal investigation into the efforts to keep President Donald Trump in office after his 2020 election loss, the department’s top leaders are equally concerned with the stubborn, postpandemic rise in violent crime, and a growing sense that lawlessness is overtaking daily life in many big cities.”

“Republicans have highlighted the issue, along with inflation, before the 2022 midterm elections, but Democrats, like Mayor Eric Adams of New York, are also embracing a law-and-order approach as their constituents demand action.”

Washington Post: “With Congress gridlocked and presidents facing challenges when they act on their own, the Supreme Court — historically the most apolitical branch of government — has seemingly become the one most capable of quickly reshaping society.”

“Across the battleground states of Arizona, Georgia and Wisconsin, many people who oppose the abortion decision said they didn’t expect Roe to fall because it had been in place for nearly five decades and, while controversial, had woven itself into American society. It was considered settled law, so its sudden demise was unsettling for many — and made them worry about what could follow.”

“The ruling catapults abortion into a top issue in all three states, where races are underway for governor and U.S. Senate.”

Washington Post: “The flurry of responses from Democrats to the Supreme Court’s decision to overturn Roe v. Wade amounts to a patchwork approach that will be tested in the months ahead in the next phase of the nationwide battle over abortion. The ruling created a new rallying cry for the party aligned with the abortion rights movement that had been bracing for a difficult election season and was struggling to generate excitement for political activism and policymaking.”

“But it has also revealed some divergences in the path forward — at times prompting Democratic aides to flash frustration over the lack of cohesion.”

New York Times: “Although abortion rights supporters say their strategy is promising, the path ahead is slow and not at all certain. Polls show that Americans overwhelmingly say that the decision to have an abortion should be made by women and their doctors rather than state legislatures. But Republican-controlled state legislatures have passed hundreds of restrictions on abortion over the last decade, and legislative districts are heavily gerrymandered to protect Republican incumbents. Litigation in state courts will be decided by judges who in many cases have been appointed by anti-abortion governors.”

“Abortion rights groups say their cases relying on state constitutions offer a viable path forward to establish Roe-like protections in states. Even in conservative states such as Oklahoma and Mississippi, they see an opportunity to overturn abortion bans and establish a constitutional backstop against further restriction.”

“Cheney emphasized that the committee’s aims were not political, but also that the Justice Department should not refrain from prosecuting Trump out of concerns about political optics if the evidence warrants criminal prosecution.”

The Guardian: The case against Donald Trump.

Gen. Mark Milley told the BBC that China is clearly developing the capability to attack Taiwan at some point.

Said Milley: “Whether they would or not, it’s a political choice, it’s a policy choice, that will be based off of how the Chinese view the cost risk benefit at the time.”

He added: “There’s no indications or warnings of anything imminent at this time. But again, we watch it very, very closely.”

Said Tribe: “There’s indication—certainly from the searches and seizures of both John Eastman and of others—strong evidence that the Justice Department is not stopping with the foot soldiers, it’s going to the Generals. And the biggest General of all, of course, is Donald Trump. I do think the odds are he will be indicted.”

However, Tribe said the committee members are presented with a lose-lose situation. If they do indict Trump, there will be violence. If they don’t, they “invite another violent insurrection.”

She noted that, unlike a seditious conspiracy charge, a rebellion or insurrection charge would see the convicted offender barred from “ever holding federal office again.”

“Airlines have canceled more than 1,100 U.S. flights since Friday and nearly 11,000 were delayed, a tough start to a busy holiday weekend after a messy spring for air travel angered passengers and drew sharp criticism from Washington,” CNBC reports.

Adam Liptak: “The release of the decision in the abortion case highlighted another way in which the court has withdrawn from public scrutiny. For unexplained reasons, the justices have stopped announcing their decisions from the bench, abandoning a tradition that is both ceremonial and illuminating. In the old days, the author of the majority opinion would give a quick and conversational summary of the ruling that could be extremely valuable for a reporter on deadline and, by extension, for members of the public trying to understand a decision.”

“More important yet were oral dissents, reserved for decisions that the justices in the minority believed were profoundly mistaken. In ordinary times, one or more of the three liberal justices who dissented in the abortion case would have raised their voices in protest. These days, the court makes do with posting PDFs of its decisions, robbing the occasion of ceremony, drama and insight.”

A new civics training program for public school teachers in Florida says it is a “misconception” that “the founders desired strict separation of church and state,” the Washington Post reports.

“President Biden is expected to roll back some tariffs on Chinese imports soon, a decision constrained by competing policy aims: addressing inflation and maintaining economic pressure on Beijing,” the Wall Street Journal reports.

“People familiar with the situation say what comes next has been pending with Mr. Biden in recent weeks and that he could announce his decision this week. It could include a pause on tariffs on consumer goods such as clothing and school supplies, as well as launching a broad framework to allow importers to request tariff waivers.”

“An Oklahoma court on Friday set execution dates for 25 death row prisoners, setting up a string of executions that would take place nearly every month over the next two years,” the New York Times reports.

“Pope Francis has dismissed reports that he plans to resign in the near future, saying he is on track to visit Canada this month and hopes to be able to go to Moscow and Kyiv as soon as possible after that,” Reuters reports.