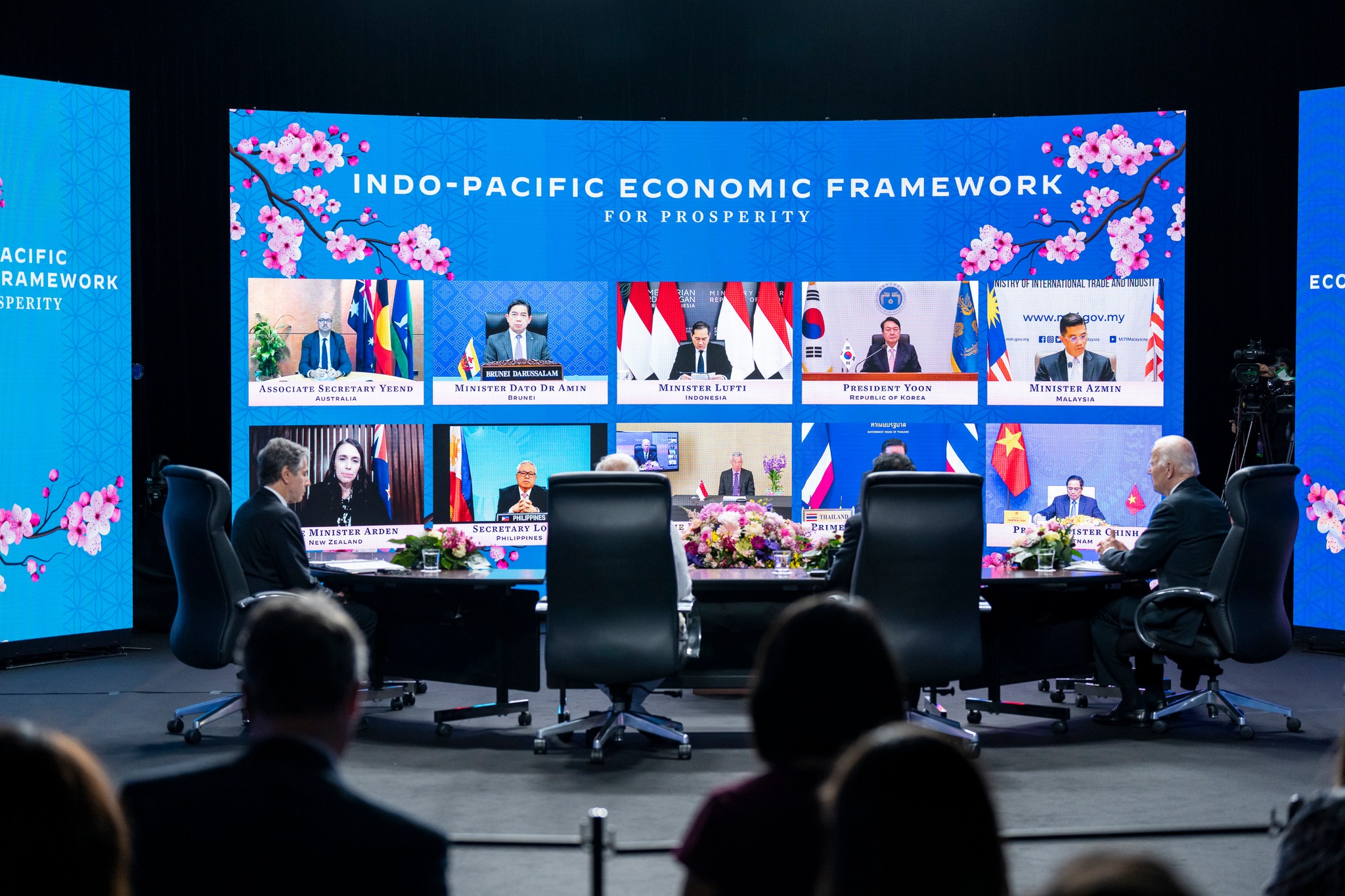 “President Joe Biden and young voters have always had a marriage of convenience. While they turned out in record numbers to vote against Donald Trump in 2020, the youngest generations have soured on Biden and lost faith in his agenda,” Time reports.

“Biden’s approval rating with voters under 30 has dropped 23 points since the first months of his presidency, according to Gallup polling. It’s fallen 17 points with voters between 30 and 50. Only 34% of Millennials and Gen Z voters say they approve of Biden’s presidency so far, according to a Marist poll sponsored by NPR and PBS, and only 2% say they strongly approve.”

“The trend could spell trouble for Democrats in the midterms. Young voters are crucial to the party’s coalition, boosting Democrats with record turnout in the 2018 and 2020 elections. Yet many young people feel the Biden Administration has failed to deliver on its promises as the President’s domestic agenda stalls.”

MARYLAND ATTORNEY GENERAL. While Rep. Anthony Brown has looked like the favorite to win the Democratic primary for attorney general almost since he startled some observers by announcing his statewide bid to succeed retiring incumbent Brian Frosh in October, a new poll from Goucher College shows a tossup race with three weeks to go before the July 19 primary. The school, surveying for The Baltimore Banner and WYPR, finds former Judge Katie Curran O’Malley edging out Brown 30-29. The only other recent poll we’ve seen was from OpinionWorks in early June, and it had the congressman ahead 42-29. O’Malley would be the first woman to serve as attorney general, while Brown would be the first African American to win this post.

Both candidates have been campaigning as ardent progressives in this blue state, where the GOP hasn’t won an attorney general election since 1918, but O’Malley was the first to go negative on TV last week. (The Washington Post says that no other Democratic statewide candidates, including the many contenders for governor, “had released an ad directly targeting a primary opponent this year.) Curran O’Malley uses her commercial to begin by discussing her “30 years of experience” as a prosecutor and judge, adding, “Now I’m running to be Maryland’s first woman attorney general.”

Curran O’Malley then declares, “My opponent, Anthony Brown, is a fine congressman, but he’s never tried a criminal case in Maryland and he doesn’t have the right experience for this job.” Brown will have the resources to respond, as he held a $1.2 million to $840,000 cash-on-hand lead on June 7.

Curran O’Malley and Brown have both long been prominent figures in Old Line State politics. Curran O’Malley, who was a district court judge in Baltimore from 2001 until she stepped down last year, became first lady of Maryland after her husband, Martin O’Malley, was elected governor in 2006, and she held that post for the following eight years. (Curran O’Malley was prohibited from campaigning for him during this time or taking part in other partisan activities.)

Brown, for his part, was O’Malley’s running mate in 2006, and their victory made him Maryland’s first Black lieutenant governor. Brown sought the top job in 2014 when his boss was termed-out, but he lost the general election to Republican Larry Hogan in an upset. However, Brown recovered from that much derided campaign two years later by winning a House seat in the D.C. suburbs, and a primary triumph next month would make him one of the state’s top politicos again.

RHODE ISLAND 2ND CD. Retiring Democratic Rep. Jim Langevin endorsed state Treasurer Seth Magaziner on Thursday, an announcement that came one day after the filing deadline passed for the September primary. Magaziner is one of eight Democrats campaigning to succeed Langevin in a seat, which includes part of Providence and western Rhode Island, that Biden would have carried 56-42.

One of Magaziner’s rivals is former state Rep. David Segal, who took third place in the 2010 primary for the neighboring 1st District and went on to found a national progressive group. Another well-funded rival is Sarah Morgenthau, a former U.S. Department of Commerce official who hails from a prominent national Democratic family; Morgenthau, though, has spent most of her career outside the state and only registered to vote in Rhode Island shortly before launching her campaign.

Also in the running is communications firm head Joy Fox, who is a former Langevin staffer. Four other candidates are in including nonprofit head Omar Bah, but none of them posted a serious amount of money when campaign finance reports were last released in March. (New quarterly reports are due by the end of July 15.)

On the GOP side, former Cranston Mayor Allan Fung, who was the party’s nominee for governor in 2014 and 2018, has just one unheralded primary foe following 2020 nominee Bob Lancia’s decision to drop out just before filing closed. A recent Suffolk University poll showed Fung leading Magaziner 45-39 and doing even better against the other Democrats, though the undecideds should favor Team Blue here.

FLORIDA 27TH CD. State Sen. Annette Taddeo has publicized a late May internal from the Democratic firm SEA Polling and Strategic Design that finds Republican Rep. María Elvira Salazar leading her by a narrow 47-45. The survey was conducted May 23-26, which about two weeks before Taddeo ended her campaign for governor to run for this Miami-area seat.

ARIZONA U.S. SENATOR. Andrew Anglin, the neo-Nazi publisher of The Daily Stormer, one of the internet’s most notorious hate sites, announced his endorsement of Blake Masters, declaring that the Republican candidate for U.S. Senate in Arizona “is getting better and better,” Jewish Insider reports.

Karl Rove: “The baseless claim that the 2020 election was stolen doesn’t appeal to independents, whose votes in key states are often decisive…”

“A big enough red tide could sweep some of these nominees into office. But if Republicans who don’t rail about election fraud consistently run better than those who do, it would suggest that emphasizing the ‘big steal’ may not be such a great argument for 2024.”

“For any GOP candidate, there’s no easy way to escape weighing in on whether 2020 was stolen. Democrats will force Republicans running for other offices to declare their position on these outlandish and corrosive claims. GOP hopefuls better begin preparing responses now. They should consider starting with the truth.”

“Gov. Glenn Youngkin (R) flew to New York last week to meet privately with GOP megadonors in Manhattan, a move that underscores recent hints that the Republican is considering a run for president in 2024,” the Washington Post reports.

“The day-long visit, which was not listed on Youngkin’s public calendar and included a trio of national TV interviews, comes as the new governor prepares to headline his first out-of-state political event since taking office, with an appearance next week in Nebraska.”

He also has begun speaking more often about the needs of ‘Americans,’ not just ‘Virginians,’ and has subtly changed how he answers questions about whether he will seek the White House.”

Molly Ball has a new profile of Youngkin: “Affable, fun-loving, up for anything: It’s hard not to like Youngkin, a trait that accounts as much as anything for his sudden political celebrity.”

“Former President Donald Trump plans to attend a rally in Alaska next week for candidates he has endorsed in the state, including Sarah Palin, who is running for the Alaska’s only U.S. House seat,” the AP reports.

“Republican strategists have discovered a problem: Personal attacks on two of the most vulnerable Democratic senators are falling flat because of their likability,” Axios reports.

“In a broadly unfavorable national environment for Democrats, control of the Senate may rest on a pair of incumbents with two of the most compelling backstories in politics — Sens. Raphael Warnock of Georgia and Mark Kelly of Arizona.”

“The National Republican Senatorial Committee is now spending most of its money trying to tie Warnock and Kelly to President Biden and his dismal approval rating.”

Associated Press: “Trump’s fundraising has fallen off dramatically over the last two months. He reported raising just over $19,000 in May and June combined after taking in nearly $9 million in March and April.”

“Florida Gov. Ron DeSantis now trails Donald Trump by just 9 percentage points in a hypothetical head-to-head matchup for the 2024 GOP presidential nomination, according to a new Yahoo News/YouGov poll — the only single-digit gap between the two potential rivals in any major national survey to date.”

“In a striking sign of vulnerability for the former president — and a possible warning that his vice-like grip on the GOP base is slipping — less than half of registered voters who identify as Republicans or Republican-leaning independents say they would choose Trump (45%) over DeSantis. Another 36% say they would pick DeSantis, while 18% say they’re not sure yet.”

Illinois Gov. J.B. Pritzker told NBC News on Wednesday “it’s certainly possible” that President Biden could face a primary challenge should he run for re-election in 2024.

“Pritzker, who fueled speculation about White House ambitions this month with a speech in the first presidential primary state, New Hampshire, and has raised eyebrows with generous donations to battleground state governors, added that he’s not pushing for a challenger to step forward.”

“Republican voters in Illinois nominated a conservative hard-liner for governor on Tuesday, lifting State Senator Darren Bailey (R) out from a bruising and costly primary that saw spending from three dueling billionaires — including the current Democratic governor, who spent tens of millions of dollars to meddle in the Republican contest,” the New York Times reports.

“Kenneth Griffin, a Chicago-based Republican and hedge-fund founder, plunged $50 million into Richard Irvin’s campaign in an effort to find a moderate Republican who could compete against Democrats in a blue state. But his preferred candidate came under attack not just from Mr. Bailey and other Republicans, but also from the Democratic Governors Association and Gov. J.B. Pritzker, a fellow billionaire and a Democrat. And Mr. Bailey had his own billionaire: Richard Uihlein, a top financier on the right.”