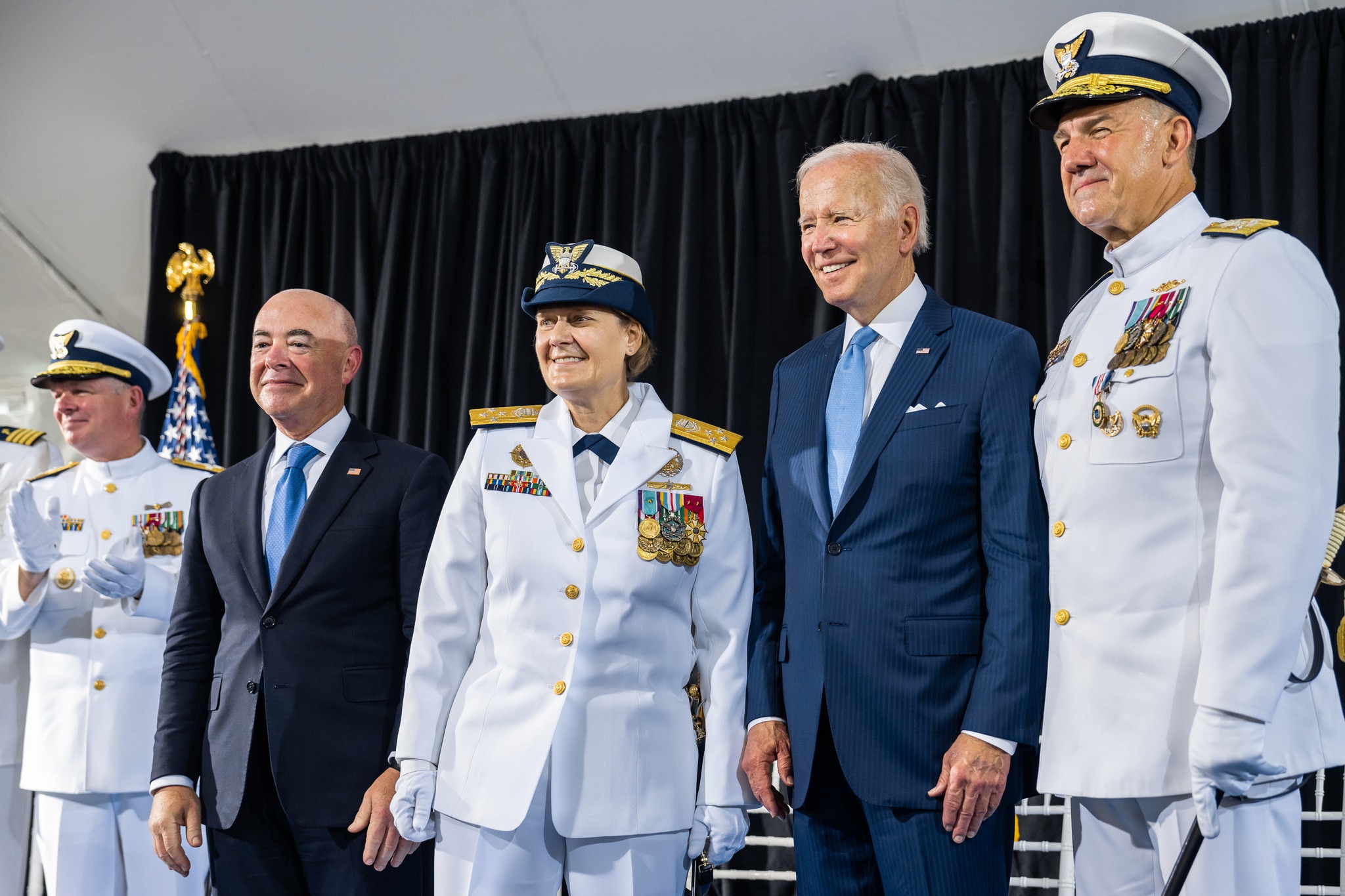 Mark Joseph Stern: “No single day has better captured the current state of the Supreme Court  than Thursday. At 10 a.m., the court issued a devastating assault on the Biden administration’s ability to regulate greenhouse gases in a 6–3 ruling joined by all of the court’s reactionary block. Ten minutes later, it issued a 5–4 opinion that just barely confirmed that the president, rather than a rogue judge in Texas, has authority over border policy, with Chief Justice John Roberts and Justice Brett Kavanaugh lending the lone votes preventing an absolutely insane outcome. Shortly thereafter, the court issued a bombshell orders list that tees up, for next term, one of the most important and dangerous democracy cases in American history, which asks whether state legislatures have near-unlimited authority over election laws.”

“The court’s most immediately lethal decision remains Dobbs v. Jackson Women’s Health Organization, which overturned Roe v. Wade. But do not let Dobbs distract from the onslaught that followed it.”

NBC News: “Pfizer and Moderna used fetal cell lines early in their Covid vaccine development to test the efficacy of their formulas, as other vaccines have in the past. The fetal tissue used in these processes came from elective abortions that happened decades ago. But the cells have since replicated many times, so none of the original tissue is involved in the making of modern vaccines.”

“The most recent Supreme Court term ended with its conservative majority getting rid of major precedents — most notably Roe v. Wade — and setting new ones on religion and guns,” Axios reports. “With a 6-3 majority, the next term — which is set to start in October — could be just as big.”

Heather Cox Richardson: “In the past, the Supreme Court has operated on the basis of ‘stare decisis,’ which literally means ‘to stand by things decided.’ The purpose of that principle is to make changes incrementally so the law stays consistent and evenly applied, which promotes social stability. On occasion, the court does break precedent, notably in 1954 with the Brown v. Board of Education of Topeka decision, which overturned the 1896 Plessy v. Ferguson decision that rubber stamped racial segregation. When that sort of a major change happens, both the court and elected officials work hard to explain that they are changing the law to make it more in line with our Constitution, and to move people along with that change.”

“With the Dobbs v. Jackson Women’s Health Organization decision of last Friday, the court simply tore up 49 years of law and history, ending federal recognition of a constitutional right Americans have enjoyed since 1973.”

“The New York State Senate on Friday passed a measure that, if fully enacted, would enshrine in the State Constitution the right to seek an abortion and access contraception,” the New York Times reports.

“But the amendment’s reach is far broader. It prohibits the government from discriminating against anyone based on a list of qualifications including race, ethnicity, national origin, disability or sex — specifically noting sexual orientation, gender identity and expression, and pregnancy on the list of protected conditions.”

Ohio State Rep. Jean Schmidt (R) said during a radio interview this week that she would entertain a debate about outlawing birth control in the wake of the United States Supreme Court overturning constitutional protections for abortion, the Cleveland Plain Dealer reports.

New York Times: “One in 10 people of reproductive age in America lives in Texas, which will soon join half of all the states in outlawing almost all abortions.”

“The state’s maternal mortality rate is one of the worst in the country, with Black women making up a disproportionate share of deaths. The state’s infant mortality rate, at more than five deaths per thousand births in 2020, translates into nearly 2,000 infant deaths annually.”

“On Monday three days after the Supreme Court issued its groundbreaking decision to overturn Roe v. Wade, Dr. Caitlin Bernard, an Indianapolis obstetrician-gynecologist, took a call from a colleague, a child abuse doctor in Ohio,” the Columbus Dispatch reports.

“Hours after the Supreme Court action, the Buckeye state had outlawed any abortion after six weeks. Now this doctor had a 10-year-old patient in the office who was six weeks and three days pregnant.”

“There is no difference between this and the Taliban. We must oppose the Christian Taliban. I say this as a Christian.” — Rep. Adam Kinzinger (R-IL), on Twitter, lashing out at Rep. Lauren Boebert (R-CO) who said she believes “the church is supposed to direct the government.”

“New York would require people applying for a handgun license to turn over a list of their social media accounts so officials could verify their ‘character and conduct’ under a bill being considered Friday by the state Legislature,” the AP reports.

“The provision was part of a proposed redesign of the state’s firearms licensing laws hammered out by lawmakers after the U.S. Supreme Court struck down rules severely limiting who could get a permit to carry a handgun outside their home.”

A group of Texas educators have proposed to the Texas State Board of Education that slavery should be taught as “involuntary relocation” during second grade social studies instruction, the Texas Tribune reports.

The proposal is in response to a new state law to keep topics that make students “feel discomfort” out of Texas classrooms.

“Joined by Michigan gubernatorial candidate Tudor Dixon, a group of House Republicans on Thursday announced a new bill that would empower parents to sue public schools that expose their children to drag shows,” Bridge Michigan reports.

“The six legislators were unable to name an example of that happening in a Michigan public school, but they proposed allowing parents to sue districts for up to $10,000 if it ever does.”

“In an extraordinary session convened by Gov. Kathy Hochul that began Thursday and carried late into Friday evening, the State Legislature adopted a new law placing significant restrictions on the carrying of handguns and passed an amendment that would initiate the process of enshrining the right to abortion in the state constitution.”

“The new legislation illustrates the growing distance between a conservative-led court that has reasserted its influence in American political life and blue states such as New York — one of the most left-leaning in the nation, where all three branches of government are controlled by Democrats and President Biden easily triumphed over Donald Trump in 2020.”

Sen. Patrick Leahy (D-VT) underwent surgery Thursday after he broke his hip in a fall at his home, the AP reports.

“Any prolonged absence by Leahy would complicate majority Democrats’ already precarious efforts to push controversial legislation and nominations through the 50-50 Senate over Republican opposition.”

“That might include a compromise with holdout Sen. Joe Manchin (D-WV) — if they can reach one — on energy, health care and tax issues, a package that would be far smaller than the collection of social initiatives he killed in December.”

New York Times: “The capital’s power centers may be helmed largely by the geriatric set, but they are fueled by recent college graduates, often with little to no previous job experience beyond an internship.”

“And while many of those young players rank low on the official food chain, their proximity to the pinnacle of power gives them disproportionate influence, and a front-row seat to critical moments that can define the country. Sometimes, the interns themselves appear to be running the show.”

Virginia Gov. Glenn Youngkin (R) this week “created a new office designed to slash state regulations and put it under the direction of Andrew Wheeler, the former Trump administration official rejected earlier this year for the Virginia governor’s Cabinet,” the Washington Post reports.

“Over 360 newspapers in the United States have gone out of business since just before the start of the pandemic,“ the New York Times reports.

“Overall, 2,500 newspapers in the United States — a quarter of them — have closed since 2005. The country is set up to lose one-third of its newspapers by 2025. And in many places, the surviving local media outlets have made major cuts to staff and circulation.”