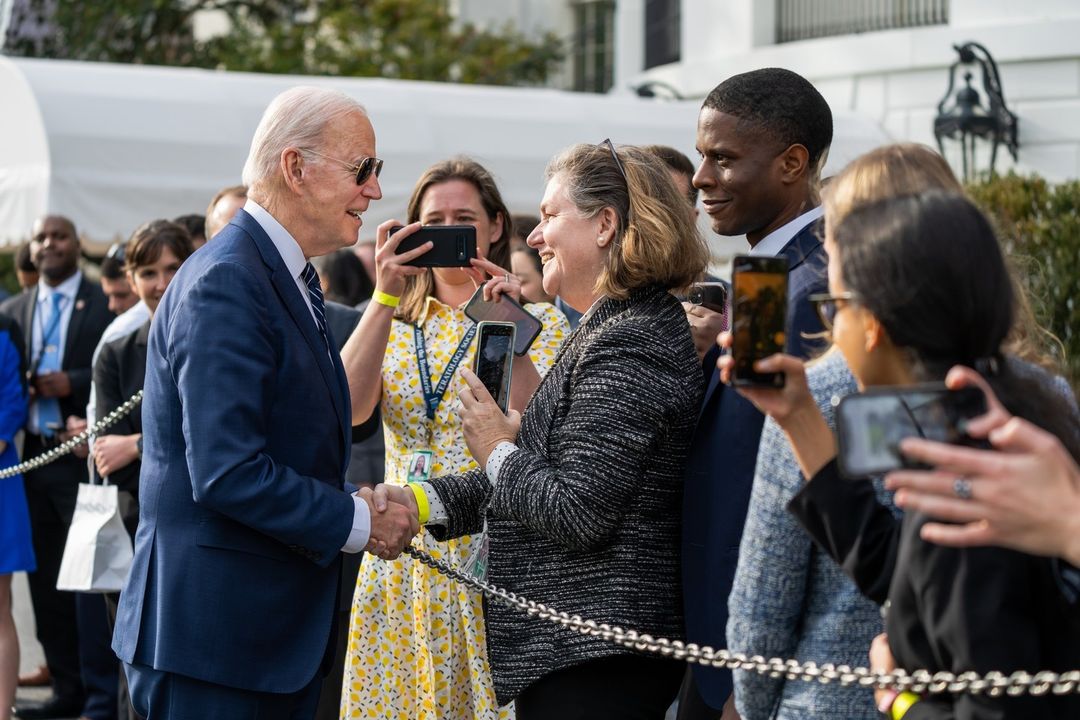 A new Monmouth poll finds 60% of Americans disapprove of overturning the Roe v. Wade precedent that has guided abortion law in the United States for nearly 50 years, while 37% approve. More than 8 in 10 Americans describe their view of the court decision as being a strongly held opinion.

An overwhelming and growing majority of Americans say the U.S. is heading in the wrong direction, including nearly 8 in 10 Democrats, according to a new AP-NORC poll that finds deep pessimism about the economy plaguing President Joe Biden.

Key takeaway: 85% of U.S. adults say the country is on the wrong track, and 79% describe the economy as poor.

A new Public Policy Polling survey finds Blake Masters leading the GOP Senate field in Arizona with 29%, followed by Mark Brnovich at 15%, Jim Lamon at 10%, and Michael McGuire at 5%.

A new Quinnipiac poll in Georgia shows Sen. Raphael Warnock (D-GA) jumping out to a double-digit lead over Republican challenger Herschel Walker (R), 54% to 44%. In the matchup for governor, Gov. Brian Kemp (R) and challenger Stacey Abrams (D) are tied at 48% each.

Nate Silver: “Republicans are substantial favorites to take over the U.S. House of Representatives following this November’s midterm elections, but the U.S. Senate is much more competitive, according to FiveThirtyEight’s 2022 midterm election forecast, which launched today.”

“Democrats are also favored to hang on to the governorships in a trio of swing states in the Rust Belt — Pennsylvania, Wisconsin and Michigan — although they are significant underdogs to win high-profile gubernatorial races in Georgia and Texas against Republican incumbents.”

ARIZONA 1ST CD. Self-funder Elijah Norton’s newest GOP primary commercial against incumbent David Schweikert features the congressman’s former campaign treasurer, Karen Garrett, expressing some choice words about her old boss and the scandal that dogged him last cycle. Garrett tells the audience that Schweikert “reported a fraudulent $100,000 loan, $279,000 in illegal contributions, and more than $500,000 missing.” She concludes, “Then he blamed his staff. He lied to us. Discovering the kind of person David has become has been one of the heartbreaks of my life.”

FLORIDA 23RD CD. Broward County Commissioner Jared Moskowitz has earned an endorsement from Hillary Clinton ahead of the Democratic primary.

OHIO 9TH CD. Democratic incumbent Marcy Kaptur is using her first TV ad against her opponent, QAnon-aligned activist J.R. Majewski, to highlight the Republican’s involvement in the Jan. 6 attack. The narrator recounts, “He broke past the police barricades at the Jan. 6 Capitol riot” as the audience sees photos of Majewski in the crowd, continuing, “140 police officers were injured, one died.” The speaker, who is now identified as a local voter, goes on to praise Kaptur’s record supporting the police and funding a new jail before adding, “Look, reckless guys waving assault weapons don’t make our families safer, more police in our neighborhoods do.”

ALASKA REFERENDUM. Alaskans will vote this November on whether to hold a state constitutional convention, and the Alaska Beacon’s Lisa Phu writes that this once-in-a-decade referendum has become an abortion rights battleground now that the U.S. Supreme Court has overturned Roe v. Wade. The Alaska Supreme Court in 1997 recognized that the state’s governing document protects the right to an abortion, and pro-choice groups are urging voters to keep the status quo in place by voting “no.”

Anti-choice forces, likewise, understand that a victory for the “yes” side would give them a chance to outlaw abortion in a state where it’s otherwise difficult to amend the state constitution. It takes two-thirds of both the state House and Senate to put a constitutional amendment proposal on the ballot, and while two state Senate committees last year advanced a proposal reading, “To protect human life, nothing in this constitution may be construed to secure or protect a right to an abortion or require the State to fund an abortion,” it failed to receive a floor vote in either chamber. Senate Republicans and their one Democratic ally currently hold a 14-6 supermajority, but the House is run by a coalition of Democrats, independents, and a few Republicans.

If a majority voted “no” this fall, then this referendum would next take place in 2032. (Alaska is one of 14 states where constitutional convention questions automatically appear on the ballot after a set number of years; in 2012, “no” won 67-33.) If “yes” came out on top, however, the lieutenant governor’s office says, “The process could take as long as four-plus years or, depending on the legislature, it could be as short as, say, two years.” Phu explains that after the convention finished its work, voters would need to approve any amendments or other revisions to the constitution. The Last Frontier held its last constitutional convention in 1955 and 1956, which was a few years before Alaska became a state.

CALIFORNIA and VERMONT CONSTITUTIONAL AMENDMENTS. On Tuesday night, both chambers of California’s Democratic-led legislature mustered up the two-thirds majorities needed to place a constitutional amendment on November’s ballot that would affirm that “the state shall not deny or interfere with an individual’s reproductive freedom in their most intimate decisions, which includes their fundamental right to choose to have an abortion and their fundamental right to choose or refuse contraceptives.”

Politico explains that, while “[p]rivacy rights already embedded in the state Constitution have been widely interpreted as protecting the right to abortion,” Democratic leaders want to do everything they can to avoid any legal ambiguity especially now that Roe v. Wade has been overturned. Back in February, Vermont’s Democratic-controlled legislature voted to place a similar constitutional amendment on its general election ballot that would safeguard “reproductive autonomy.” Civiqs finds that at least 70% of registered voters in both states believe abortion should be legal in all or most cases.

OKLAHOMA 2ND CD. Former state Sen. Josh Brecheen will join state Rep. Avery Frix in the Aug. 23 GOP runoff for Oklahoma’s open 2nd Congressional District after the AP called the second spot for him on Wednesday. Frix narrowly edged out Brecheen 15-14 in the primary, with Muskogee Chief of Police Johnny Teehee taking 13%. The winner will be a lock in November in this safely red district.

OREGON 5TH CD. Democrat Jamie McLeod-Skinner’s allies at 314 Action, who just endorsed her last week, are out with a Public Policy Polling survey that shows a tight race, with Republican Lori Chavez-DeRemer ahead 42-41 in a seat that Joe Biden would have carried 53-44. The poll, which is the first we’ve seen of this matchup, was conducted June 1 to 2, which was just days after the Associated Press projected that McLeod-Skinner had defeated conservative Rep. Kurt Schrader in the May 17 primary. Schrader since then has angrily refused to endorse his party’s nominee, saying in mid-June, “The red wave begins in Oregon―Oregon’s 5th district.”

NEVADA 3RD CD. The Tarrance Group, working on behalf of Republican April Becker and the NRCC, finds Becker edging out Democratic incumbent Susie Lee 46-44 in a southern Las Vegas area seat that Biden would have carried 52-46. This internal, which sampled 400 likely voters, is the first poll we’ve seen of this contest. Lee, for her part, is one of several Democrats nationwide who recently launched an ad campaign focused on her opponent’s opposition to abortion rights.

MICHIGAN 11TH and 13TH CDs. The Detroit News reports that the hawkish pro-Israel group AIPAC has booked a total of $1.5 million in TV ads in the Detroit media market for the week of June 28 in order to air ads promoting Rep. Haley Stevens in the 11th District and her fellow Democrat, state Sen. Adam Hollier, in the August primary for the 13th, though there’s no word how the reservation is being divided up. The pro-Stevens ad highlights her work in Barack Obama’s auto rescue task force, while the commercial for Hollier praises his record on gun safety and abortion rights.

“Vice President Kamala Harris created new uncertainty Wednesday about President Biden’s intentions to run for reelection in 2024, pulling back from a definitive statement she had made earlier in the week,” the Los Angeles Times reports.

Said Harris: “The president intends to run and if he does, I will be his ticket mate. We will run together.”

“At fundraisers and on the sidelines of events in recent weeks, Joe Biden has been selling Democrats — on Joe Biden for 2024,” NBC News reports.

“It’s an unusual sales pitch reflecting an unusual political moment: the nation’s oldest sitting president, with a weakened political standing, grappling with questions in his own party about whether he will, or even should, run for another term, shaped by the prospect of a rematch against Donald Trump.”