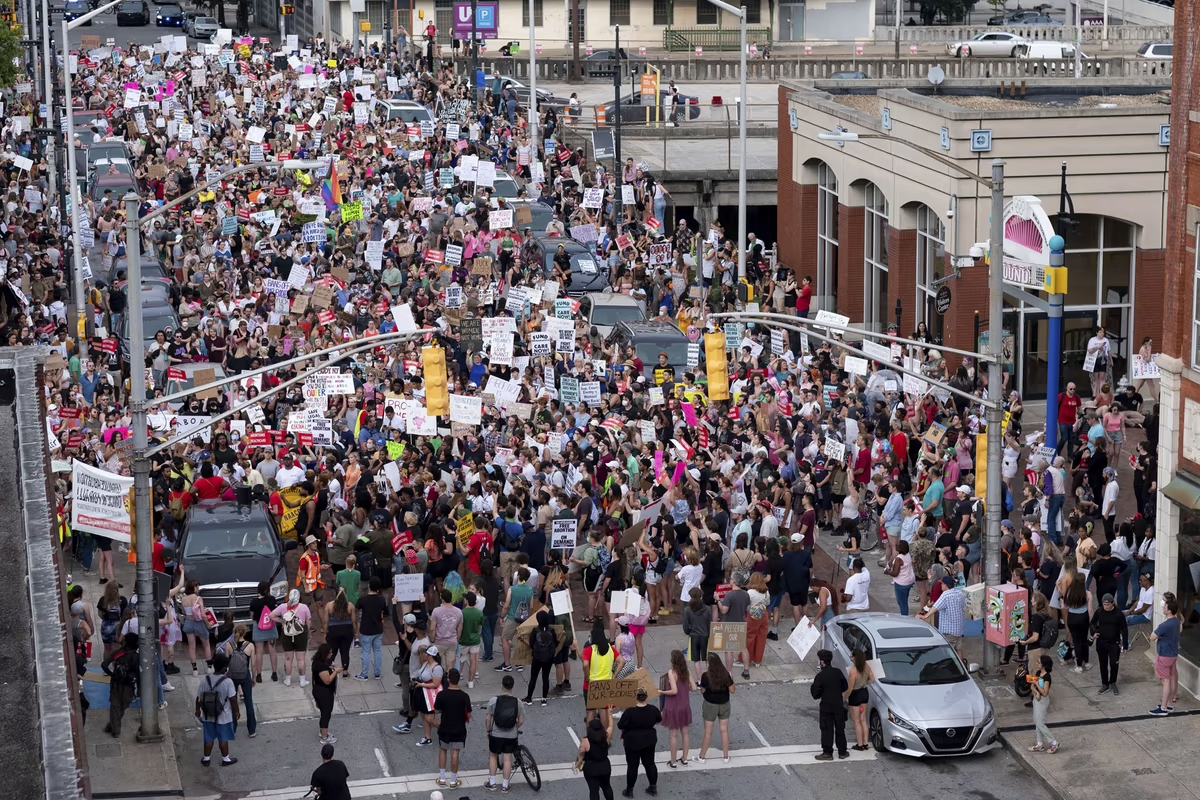 “A new and rapidly shifting reality took hold across America on Saturday as abortion, a basic legal right for nearly a half century, was outlawed in some states, and the initial bursts of elation and shock from the overturning of Roe v. Wade gave way to action,” the New York Times reports.

“At abortion clinics across the country, providers hastily canceled appointments out of fear of prosecution, and stunned women abruptly made plans to cross state lines into places where abortion was still allowed — traveling from Missouri to Illinois, from Wisconsin to Minnesota.”

There’s little question that this lopsided reaction can turn a lot of close races. But there’s no way to do that without putting a clear post-election action on the table for voters.

“President Biden and his counterparts in the Group of Seven nations are announcing a ban on new imports of Russian gold in an attempt to further isolate the country from financial markets and punish Russian President Vladimir Putin for the invasion of Ukraine,” the Washington Post reports.

“The ban on gold imports, which could amount to a penalty of tens of billions of dollars, appeared to be the primary new economic sanction to be imposed on Russia out of the summit.”

CNN: What to watch from Biden’s trip to the G-7.

“The United States is one of the few countries to restrict access to abortion in the past two decades, while dozens of other countries have expanded access.”

British Prime Minister Boris Johnson warned that allowing Russian President Vladimir Putin to succeed in his invasion of Ukraine would have “absolutely catastrophic” consequences for the world, CNN reports.

Said Johnson: “I would just say to people in the United States that this is something that America historically does and has to do, and that is to step up for peace and freedom and democracy.”

He added: “And if we let Putin get away with it, and just annex, conquer sizable parts of a free, independent, sovereign country, which is what he is poised to do … then the consequences for the world are absolutely catastrophic.”

“Google search data shows Americans — particularly those in states most impacted by the Supreme Court’s decision to overturn Roe v. Wade —are scrambling to figure out where they can still get abortions and what the law means for future access,” Axios reports.

“Those most actively searching were in political battlegrounds like Wisconsin, Michigan and New Hampshire — where there are no existing laws that would immediately ban or codify abortion rights, as well red states Missouri, Kentucky and Utah, where a trigger law has banned the procedure.”

“Searches for ‘abortion clinic near me’ over-indexed in the Southeast, where a number of states had trigger laws on the books.”

“A Biden administration policy that prioritized the arrest of undocumented immigrants who are considered a threat to public safety and national security has been suspended as of Saturday, rendering millions of people vulnerable to deportation,” the New York Times reports.

“A federal judge in Texas had ruled the prioritization policy illegal on June 10, a ruling that took effect late Friday after a federal appeals court failed to issue any decision blocking it. The Department of Homeland Security said it effectively had no discretion under the ruling to set priorities for how its agents enforced the nation’s immigrant-removal laws.”

“On the heels of their greatest victory, antiabortion activists are eager to capitalize on their momentum by enshrining constitutional abortion bans, pushing Congress to pass a national prohibition, blocking abortion pills, and limiting people’s ability to get abortions across state lines,” the Washington Post reports.

Donald Trump “is anxious about what the end of Roe, and the flood of extreme Republican state-level anti-abortion laws it will unleash, will mean for the GOP’s electoral prospects — and for his own,” Rolling Stone reports.

Said one source who spoke to Trump: “He keeps shitting all over his greatest accomplishment. When you speak to him, it’s the response of someone fearing the backlash and fearing the politics of what happens when conservatives actually get what they want.”

The source added: “I do not think he’s enjoying the moment as much as many of his supporters are, to be honest with you.”

“A Providence police officer who was running for state office as a Republican dropped out of the race on Saturday amid a criminal investigation for allegedly punching his Democratic opponent in the face during an abortion protest,” the Washington Post reports.

Said Jennifer O’Rourke (D) on Twitter: “Last night, after speaking at our Roe rally, my Republican opponent — a police officer — violently attacked me. This is what it is to be a Black woman running for office. I won’t give up.”

Rep. Mary Miller (R-IL) told a crowd at a rally held alongside former president Donald Trump that the supreme court’s decision to overturn Roe v Wade was a “victory for white life,” The Guardian reports.