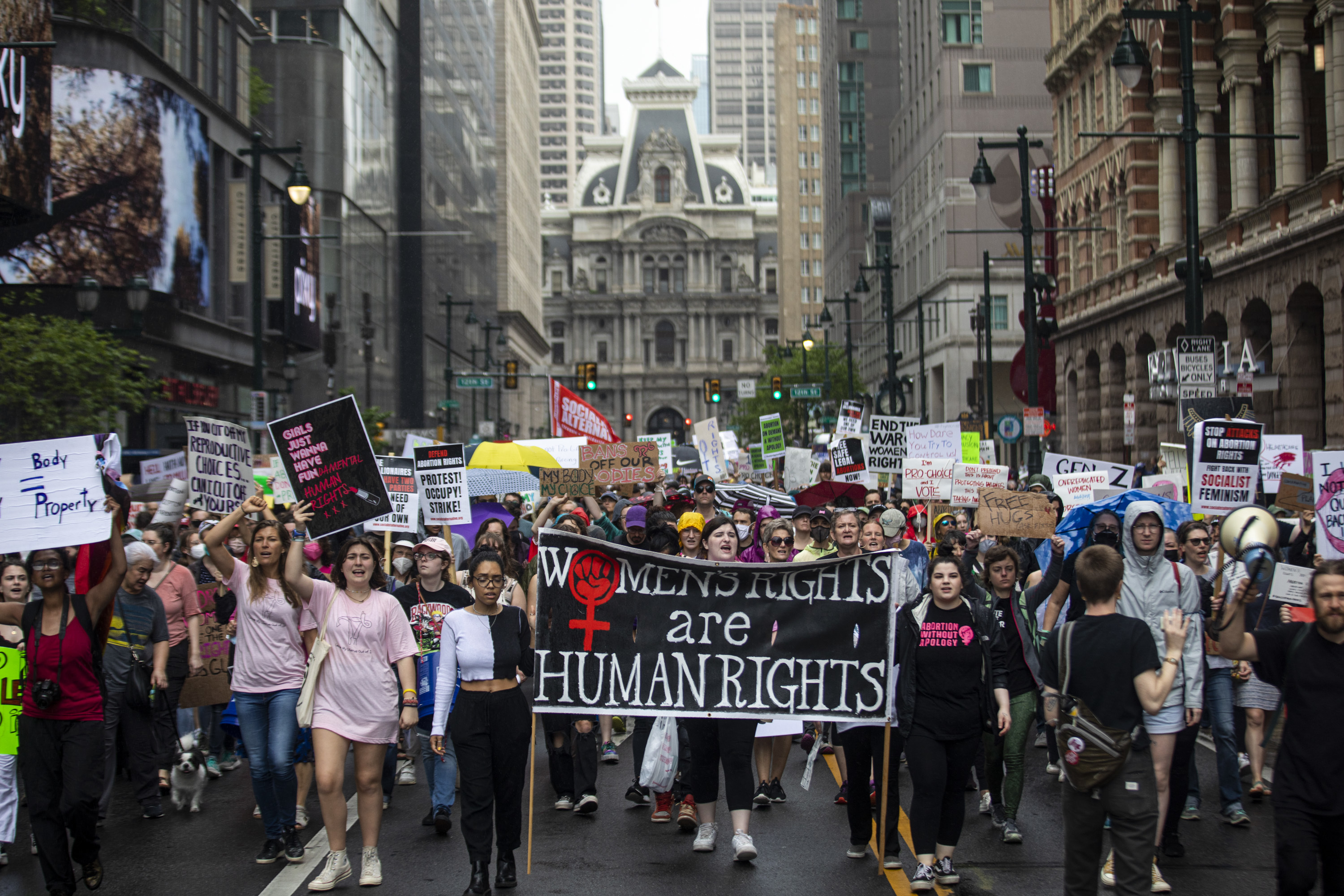 Dan Balz: “By overturning Roe v. Wade and ending the guaranteed right to abortion nationwide, the court’s newly entrenched conservative bloc has set the country on a course toward legal and political warfare destined to last for years, a conflict perhaps even more intense than the one that has raged since Roe was decided in 1973.”

“The implications of the court’s ruling are difficult to overstate and nearly impossible to predict. The immediate impact will be felt by millions of women in states that will now outlaw abortions in all or virtually all circumstances. But it could be felt as well by others who now fear their rights are in danger, particularly those in the LGBTQ community.”

Washington Post: “It’s not clear whether Roe’s demise will give Biden a path to find his voice and re-energize his presidency, or will simply exacerbate the social divisions that have created such obstacles to governing.”

Politico: “After nearly seven months of deliberations, Roberts found precisely zero takers among his fellow justices for his incrementalist approach that would have avoided overruling Roe for now, but allowed Mississippi to impose a near ban on abortions after 15 weeks of pregnancy.”

“The court’s conservatives dismissed Roberts’ stance as unprincipled and impractical, while the liberal justices called it ‘wrong’ without detailing their objections.”

“Ultimately, Roberts’ opinion amounted to an afterthought that had no impact on the outcome of the case.”

“The legislation appears unlikely to advance in the Senate in the near future — due in part to the 60 votes needed to overcome a filibuster. Still, the early discussions represent the excitement energizing opponents of abortion rights, eager to capitalize on Friday’s victory.”

New York Times: “Around the world, many governments have been moving toward easier access to abortion, with more than 50 countries liberalizing their laws in the past three decades.”

“By contrast, a recent Supreme Court brief filed by abortion providers said that overruling Roe puts ‘the United States in the company of countries like Poland and Nicaragua as one of only a few countries moving toward greater restrictions on legal access to abortion in the past 20 years.’”

“Republicans finally got the Roe v. Wade decision they wanted, and in public, they are delighted,” Politico reports.

“More quietly, however, according to interviews with more than a dozen Republican strategists and party officials, they just didn’t want it to come right now — not during a midterm election campaign in which nearly everything had been going right for the GOP.”

JPMorgan Chase, Goldman Sachs, Bank of America, Deutsche Bank AG and American Express will pay for employees to travel to another state if needed to obtain a legal abortion, Bloomberg reports.

Stephen Carter: “With Roe v. Wade no longer the law of the land, women seeking abortions will soon start traveling. Could a state punish an employer for covering their costs? The issue is likely to arise: A number of major corporations have come forward with offers to pay the expenses of employees who leave the state to end their pregnancies, and some state legislators are threatening to punish them.”

Ron Brownstein: “What’s becoming clearer over time is that the Trump-era GOP is hoping to use its electoral dominance of the red states, the small-state bias in the Electoral College and the Senate, and the GOP-appointed majority on the Supreme Court to impose its economic and social model on the entire nation—with or without majority public support.”

“As measured on fronts including the January 6 insurrection, the procession of Republican 2020 election deniers running for offices that would provide them with control over the 2024 electoral machinery, and the systematic advance of a Republican agenda by the Supreme Court, the underlying political question of the 2020s remains whether majority rule—and democracy as we’ve known it—can survive this offensive.”

“President Joe Biden signed into law the most sweeping legislation aimed at preventing gun violence in 30 years at the White House on Saturday shortly before departing for Europe for a series of meetings with world leaders,” NBC News reports.

Los Angeles Times: “Four of the five Supreme Court justices who voted to overturn Roe vs. Wade, the landmark 1973 decision that guaranteed abortion rights nationwide, are men. When the Senate confirmed the justices, 91% of the yes votes came from men.”

“Four of the justices were nominated by presidents who had gained the White House despite losing the popular vote: Donald Trump and George W. Bush, who lost the popular vote in 2000 then was reelected in 2004 with 50.7%. The decision to overturn Roe vs. Wade is politically unpopular, with about 60% of Americans consistently opposing that move. And public opinion of the court itself is declining.”

“In the Senate hearings for the five justices, 71% of the votes cast by women were against confirmation; 42% of male senators’ votes were against.”

Washington Post: “Trump has largely stayed away from the looming Roe decision in recent weeks, only decrying the leak of a draft opinion in the case from the Supreme Court and avoiding opportunities to talk about it publicly.”

“He has complained privately that the overturning of Roe could hurt Republicans politically in independent and suburban districts, two advisers said, and has told allies they should emphasize that states can set their own laws. Trump has also told some of his advisers he thinks a better position would be to limit but not ban abortion.”

Said one adviser: “He is convinced it won’t help him in the future.”

John Ellis on the decision helping Trump: “First: it changes the subject, something the Trump camp has been quite desperate to do since the Committee hearings began.”

“Second, it reminds the Republican Party’s most important constituency — white evangelical Christians — just who made yesterday’s ruling possible. That would be, first and foremost, Donald Trump.”

“Third, it requires all the other GOP candidates for the 2024 presidential nomination to acknowledge (and feign admiration for) Trump’s role in Roe’s reversal. This reinforces the perception that the Republican ‘field’ of candidates is actually two fields: Trump and everybody else.”

“Fourth, and this is always a consideration in Trump world, it enables an aggressive direct mail fund-raising campaign, asking small donors to express their appreciation for Trump’s role in the reversal of Roe by sending money to the coffers of what might be called the Trump Bank for Future Endeavors. Such an appeal will raise a lot of money.”

“Sen. Susan Collins was blasted Friday for the overturning of Roe v. Wade, as opponents targeted her votes to confirm two justices to the Supreme Court who were in the majority opinion allowing states to ban abortion,” the AP reports.

“Critics of the Maine senator haven’t forgotten the key role she played in confirming Justices Neil Gorsuch and Brett Kavanaugh, and she was ripped anew on social media.”

“Some opponents took to name-calling and attacked Collins for being naive or complicit. Others called for her resignation.”

“In the United States and some other countries, the Covid-19 pandemic has entered a paradoxical stage in which the coronavirus has evolved into a highly contagious variant and sent cases soaring, but the public’s attitude has evolved toward indifference, deflating precautionary measures,” Quanta Magazine reports.

“Nearly 20 million lives were saved by Covid-19 vaccines during their first year, but even more deaths could have been prevented if international targets for the shots had been reached,” the AP reports.

Jonathan Bernstein: “In October 1973, Nixon ordered his attorney general to fire a special prosecutor, fired the attorney general when he refused, and then had the second-in-command at Justice resign as well. The strong reaction against what Nixon had done brought the possibility of impeachment into the mainstream.”

“That example was surely helpful to the Justice Department officials who resisted Trump’s scheme to install Jeffrey Clark as acting attorney general. Trump took their threats to resign seriously in part because of this famous precedent; he was convinced it would go badly for him because it had gone badly for Nixon.”

“Iran has dismissed the longstanding intelligence chief of the Revolutionary Guards force, considered one of the country’s most powerful figures, as concerns mount over Israel’s covert war on Iran’s defense systems and its nuclear program,” the New York Times reports.

“The removal of the intelligence chief, Hossein Taeb, after 13 years in the post, was confirmed in a statement by the Guards that did not explain why he had been dismissed. But analysts agreed that his failure to stop Israel from breaching Iran’s security network was at the heart of it.”

“An ongoing La Niña event that has contributed to flooding in eastern Australia and exacerbated droughts in the United States and East Africa could persist into 2023, according to the latest forecasts,” Nature reports.

“The occurrence of two consecutive La Niña winters in the Northern Hemisphere is common, but having three in a row is relatively rare. A ‘triple dip’ La Niña — lasting three years in a row — has happened only twice since 1950.”

“Benjamin Netanyahu hopes to engineer his return to power by launching a ‘scorched-earth’ campaign, courting far-right voters and accusing rivals of being beholden to Islamists,” the Times of London reports.

“The former prime minister warned rivals when he was unceremoniously removed from power a year ago that he would return.”

“The collapse of the coalition of eight ideologically diverse parties that replaced him — led by Naftali Bennett, who began his career as Netanyahu’s chief of staff — was largely Netanyahu’s doing.”

Ross Douthat: “By any reasonable political science theory, any normal supposition about how power works in our republic, this day should not have come.”

“The pro-life movement has spent half a century trying to overturn a Supreme Court ruling that was presumed to reflect the enlightened consensus of the modern age. It has worked against the public’s status quo bias, which made Roe v. Wade itself popular, even if the country remained conflicted about the underlying issue. Against the near-universal consensus of the media, academic and expert class. Against the desires of politicians who were nominally supportive of its cause, the preferences of substantial portions of American conservatism’s donor class.”

“Across all those years the pro-life cause also swam against the sociological and religious currents of American life, which have favored social liberalism and secularization.”

In a 2010 deposition in the case, given a week after he was elected to his first term in the U.S. House, Sen. James Lankford (R-OK) testified that he believed a 13-year-old girl could consent to sex, the AP reports.

Sen. Kevin Cramer (R-ND) disclosed he sustained a major injury to his right hand while doing yard work over the weekend with “a high risk of infection and the possible need for amputation” of some fingers, Politico reports. Ah, such a shame.

“Officials and experts in Washington and Seoul agree that North Korea is set to conduct its seventh nuclear test and its first since 2017 — likely quite soon,” Axios reports.

“Pakistan has arrested the alleged mastermind of the 2008 Mumbai terrorist attacks after years of denying his presence and even claiming he was dead,” Nikkei Asia reports.