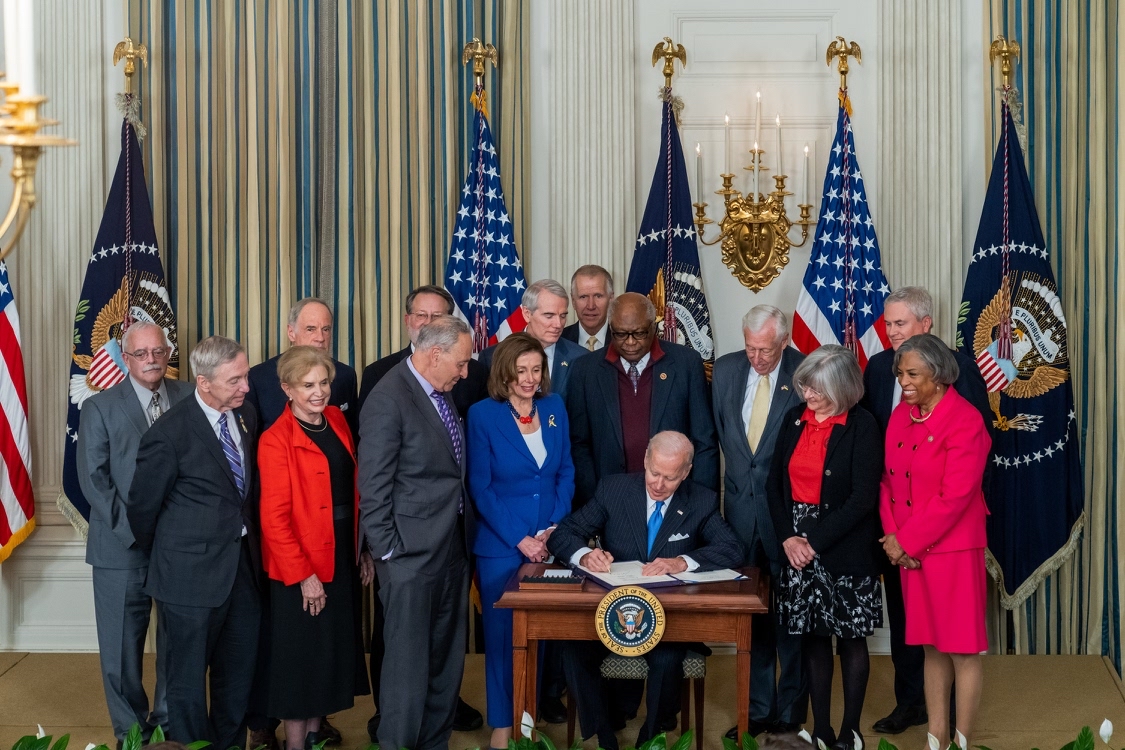 “Former President Donald Trump’s political operation and Republican Party committees have paid over $12.6 million to individuals and firms that organized the Jan. 6, 2021, rally that preceded the deadly attack on the U.S. Capitol since the start of the 2020 election,” OpenSecrets reports.

“The full extent of the payments from the Trump campaign political operations to rally organizers during the 2020 election and around the rally in early 2021 remains a mystery because the campaign’s top vendor was American Made Media Consultants LLC, a firm created by Trump campaign aides to act as a clearinghouse for its spending.”

“Trump’s campaign and joint fundraising committee routed more than $771 million through the firm, hiding details of those payments.”

“A day after the House committee investigating the Jan. 6 assault illustrated the serious danger that rioters posed to Mike Pence, former President Donald Trump unleashed a new attack on the man who had served him as vice president, criticizing him for refusing to interfere with the Electoral College certification of the 2020 presidential contest,” the New York Times reports.

The Washington Post reports Trump referred to Pence as a “human conveyor belt” for his role in moving the election process forward, saying that he had considered labeling him as a “robot.”

Maggie Haberman: “My understanding from multiple people is that he’s been unhappy watching them. He’s frustrated in particular seeing the clips of his family — Ivanka Trump and Jared Kushner — being used against him.”

More from Haberman’s report in the New York Times: “Mr. Trump has grown angry watching the hearings, knowing that he lacks a bully pulpit from which to respond, according to his advisers.”

Former President Trump said on Friday that he would look “very, very seriously” at pardoning those charged in connection with storming the Capitol on Jan. 6, 2021, if he ran for and became president again, The Hill reports.

A New York Times investigation shows how the Proud Boys coordinated to instigate multiple breaches of the U.S. Capitol on Jan. 6.

Wall Street Journal: “Most top executives say they think a recession is looming or already here, according to a new survey, reflecting a rapid deterioration of the economic outlook among business leaders.”

“More than 60% of CEOs expect a recession in their geographic region in the next 12 to 18 months, according to a survey of 750 CEOs and other C-suite executives released Friday by the Conference Board, a business research firm. An additional 15% think the region of the world where their company operates is already in a recession.”

“Russian forces have conducted a series of operations against the U.S.-led coalition in Syria this month, including one this week at a strategically located base in the southern part of the country,” the Wall Street Journal reports.

“The Russian actions have alarmed U.S. military officials, who are concerned that a miscalculation might escalate into an unintended conflict between the U.S. and Russian forces in Syria.”

New York Times: “The first three hearings of the House Jan. 6 committee have deeply undercut, if not demolished, the postelection myths repeated incessantly by former President Donald Trump and his supporters and embraced and amplified by Republicans in Congress.”

“A parade of Republican witnesses — his attorney general, William Barr, his daughter Ivanka Trump, and his own campaign lawyers — knew he had lost the election and told him so. Mr. Trump was informed that the demands he was making of Mr. Pence to block his defeat unilaterally were illegal. Even the most active coup plotter, the conservative lawyer John C. Eastman, conceded before Jan. 6 that his scheme was illegal and unconstitutional, then sought a presidential pardon after it led to mob violence.”

“Yet the most striking revelation so far may be how deeply Mr. Trump’s disregard for the truth and the rule of law have penetrated into the Republican Party, taking root in the fertile soil of a right-wing electorate stewing in conspiracy theories and well tended by their media of choice. The Republican response to the hearings — a combination of indifference, diversion and doubling down — reflects how central the lie of a stolen election has become to the party’s identity.”

“With Congress closing in on a bipartisan gun-safety deal after last month’s run of mass shootings, the Supreme Court soon will issue a ruling that could make it easier for people in at least a half-dozen states to legally carry loaded firearms in public,” the Washington Post reports.

“It will be the first major Second Amendment decision from the court in more than a decade. And if the justices strike down New York’s century-old restrictions on carrying concealed firearms, as appeared likely when the case was argued last fall, similar regulations in California, New Jersey, Maryland, Hawaii, and Massachusetts would be vulnerable.”

Sen. John Cornyn (R-TX), the lead Republican negotiator on the bipartisan gun safety package, told a home-state crowd at the Texas GOP convention on Friday that he had “fought and kept President Biden’s gun grabbing wish list off the table,” yet still received boos from the crowd, CNN reports.

Said Cornyn: “Democrats pushed for an assault weapons ban, I said no. They tried to get a new three-week mandatory waiting period for all gun purchases, I said no. Universal background checks, magazine bans, licensing requirements, the list goes on and on and on. And I said no, no, 1,000 times no.”

Texas Tribune: Caught between an A+ NRA rating and a nation reeling from shootings, John Cornyn is key to whether gun safety deal advances.

Washington Post: “Biden’s reelection plans do not entirely hinge on what Trump does, but aides and allies agree the president would almost certainly not change his mind about running again if Trump is the Republican nominee and he is healthy enough for a campaign, a fact Biden has acknowledged. Biden considers his defeat of Trump, whom he sees as disrupter of American democratic traditions, central to his legacy.”

Said former Biden campaign manager Greg Schultz: “If Trump is going to run, there is no question Biden is running, and he would probably run regardless.”

“For years, TikTok has responded to data privacy concerns by promising that information gathered about users in the United States is stored in the United States, rather than China, where ByteDance, the video platform’s parent company, is located,” BuzzFeed News reports.

“But according to leaked audio from more than 80 internal TikTok meetings, China-based employees of ByteDance have repeatedly accessed nonpublic data about US TikTok users — exactly the type of behavior that inspired former president Donald Trump to threaten to ban the app in the United States.”

“Former Trump White House official Peter Navarro pleaded not guilty Friday to contempt of Congress charges after refusing to cooperate with a congressional investigation into the Jan. 6 attack on the U.S. Capitol,” the AP reports.

“U.S. District Judge Amit Mehta scheduled a trial for November. Navarro’s lawyers asked for the trial to be held next year, saying the case presented constitutional and legal questions that need to be litigated.”

“The House committee investigating the Jan. 6 attack could start sharing some transcripts of witness interviews with federal prosecutors as early as next month as Justice Department officials ratchet up public pressure on the panel to turn over the documents,” the New York Times reports.

“Negotiations between Justice Department officials and Timothy J. Heaphy, the lead investigator for the House panel and a former federal prosecutor, have intensified in recent days, as the two sides wrangle over the timing and content of the material to be turned over.”

“As the House committee investigating the 2021 attack on the U.S. Capitol focused almost entirely Thursday on the role Mike Pence played in averting a constitutional crisis, the former vice president was far from Washington,” the Wall Street Journal reports.

“Rather than watch the hearing, Mr. Pence was in Ohio, campaigning for Gov. Mike DeWine and a Republican congressman—the latest step in a carefully managed re-emergence onto the national political scene as he appears to lay the groundwork for a 2024 presidential campaign.”

“The House select committee investigating the Jan. 6 riot has been trying to draw more eyes to its televised hearings by uploading clips of the proceedings online. But YouTube has removed one of those videos from its platform, saying the committee was advancing election misinformation,” the New York Times reports.

“The excerpt, which was uploaded June 14, included recorded testimony from former Attorney General William Barr. But the problem for YouTube was that the video also included a clip of former President Donald Trump sharing lies about the election on the Fox Business channel.”

“In an abrupt change of course, the White House is now declining to comment on the frequency of President Joe Biden’s COVID-19 testing regimen, even as it maintains that it would inform the public if he were to ever test positive for the coronavirus,” the AP reports.

“Since Inauguration Day, the White House had frequently answered questions from reporters about when Biden, 79, last tested negative for the virus. Now, the White House says its policy is not to answer those questions.”