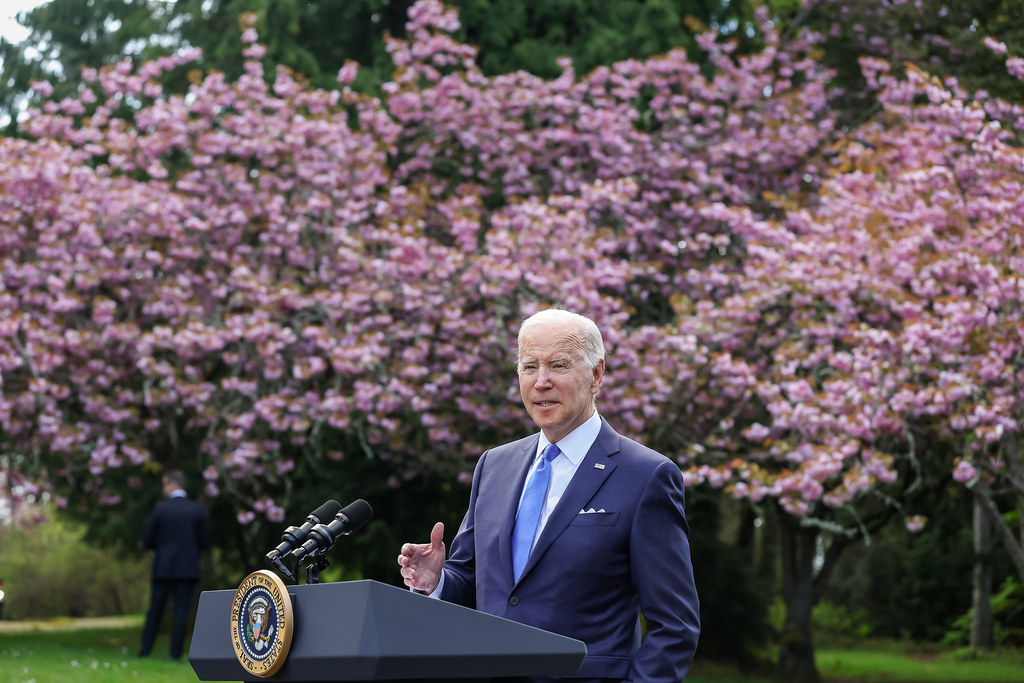 President Biden’s average approval has hovered for months in the low 40s, but hit a new low of 39.7% on Monday — worse than former President Trump’s was at this point in 2018.

Axios: “Presidential job approval — particularly at this stage of an election — can serve as a proxy for understanding how the public feels about the party in power in Washington. Biden’s window of opportunity for boosting his standing ahead of the midterms is quickly closing.”

Gallup: “The party of the president typically loses U.S. House seats in midterm elections — an average of 23 since 1974. However, 2022 is not shaping up to be an average year. Rather, as of May, Gallup finds presidential job approval and three other key national mood indicators well below the historical averages measured in past midterm election years. On their own, those numbers would all predict a greater-than-average loss of seats for the Democratic Party this fall.”

“A growing number of people are selectively avoiding important news stories such as the coronavirus pandemic, Russia’s invasion of Ukraine, and the cost-of-living crisis,” Reuters reports.  “While the majority of people surveyed consume news regularly, 38% said they often or sometimes avoid the news – up from 29% in 2017.”

The Senate numbers were released hours before the Daily Beast’s Roger Sollenberger reported that Walker, who has been on the receiving end of a seemingly never-ending string of critical stories about his past, has a 10-year-old son he’d never publicly acknowledged. Walker’s team confirmed the accuracy of the report about the candidate, who said in 2020, “I want to apologize to the African American community, because the fatherless home is a major, major problem.”

Sollenberger writes that Walker, who was ordered to pay child support in 2014, “sends Christmas and birthday presents, [but] he otherwise has not played an active parental role in raising his second son.” Sollenberger also says that this child has never spoken to Christian Walker, the candidate’s 22-year-old son who has played an active role in the Senate race.

PENNSYLVANIA U.S. SENATOR and GOVERNOR. Suffolk University’s new poll for USA Today shows Democrat John Fetterman leading Republican Mehmet Oz 46-37 in race for U.S. Senate, while Democrat Josh Shapiro posts a smaller 44-40 advantage over QAnon ally Doug Mastriano in the contest for governor. This is the first look we’ve gotten at a Fetterman-Oz matchup since December of last year, as well as the very first public survey of the gubernatorial race.

FLORIDA GOVERNOR. Democratic state Sen. Annette Taddeo endorsed Rep. Charlie Crist a week after she ended her own campaign for governor in favor of running for Congress. Taddeo was Crist’s running mate when he last ran for governor in 2014 and lost narrowly to Republican Rick Scott.

NORTH CAROLINA U.S. SENATOR. SurveyUSA, working on behalf of WRAL, gives Democrat Cheri Beasley a 44-40 edge over Republican Ted Budd in its first look at North Carolina’s crucial Senate race. That’s a bit different than what two other pollsters found in the days following last month’s primaries: East Carolina University put Budd ahead 49-42, while the Republican posted a smaller 44-42 edge in a Cygnal survey for the conservative Civitas Institute and John Locke Foundation.

NEVADA GOVERNOR. The hard-right Club for Growth has published an early June internal from WPA Intelligence that shows Joe Lombardo, who won the GOP primary Tuesday, edging out Democratic incumbent Steve Sisolak 48-47. That’s quite a bit better for Lombardo than the 43-31 deficit the University of Nevada, Reno gave him last month, though as we wrote then, that huge gap was likely due to Sisolak’s greater name recognition.

ARIZONA ATTORNEY GENERAL. Donald Trump’s Big Lie slate in Arizona expanded on Thursday when he endorsed former prosecutor Abe Hamadeh in the six-way August primary to succeed termed-out Attorney General Mark Brnovich, who is seeking the GOP nod for U.S. Senate. The attorney general, governor, and secretary of state are the three offices involved in certifying election results in the Grand Canyon State, and as we’ll discuss, Trump is also supporting candidates for those two other open seats who also deny that Joe Biden won in 2020.

Hamadeh, for his part, also told the Arizona Republic last month that he didn’t believe Biden had carried the state. “No, the 2020 election was rotten, rigged, and corrupt,” he insisted, continuing, “Never again will we sit by as the media, activist judges, and big tech openly work to rob a sitting president of an election.” The candidate added, “As AG I will prosecute the election fraud of 2020 and secure the 2024 election so when Donald Trump runs and wins again in 2024, everyone will know it’s legitimate.” In a separate appearance with a local tea party group, Hamadeh argued, “I think we need to get tough on crime. Don’t be picking on the little guy—but get tough on serious crime and not go after Kyle Rittenhouse.”

While Trump has suffered some major losses in recent primaries, his support for Hamadeh could nonetheless give him a lift in a crowded contest that has lacked an obvious frontrunner. Hamadeh’s intra-party foes are Tiffany Shedd, who lost a close general election last cycle in the 1st Congressional District against Rep. Tom O’Halleran; Rodney Glassman, a former Democrat who now sports an endorsement from far-right Rep. Paul Gosar; former prosecutor Lacy Cooper; former Arizona Supreme Court Justice Andrew Gould; and manufacturing executive Dawn Grove. The winner will go up against former Arizona Corporation Commission Chair Kris Mayes, who has no opposition in the Democratic primary.

Trump threw his backing behind Hamadeh months after he endorsed like-minded election deniers for governor and secretary of state, and the former prosecutor very much fits right in with the rest of the bunch.

Trump’s candidate to replace termed-out GOP Gov. Doug Ducey is Kari Lake, a former local TV anchor turned conservative conspiracy theorist who has called for Arizona to take the legally impossible step of decertifying its 2020 results. And in the race to succeed Secretary of State Katie Hobbs, who is Team Blue’s frontrunner for governor, Trump is all-in for state Rep. Mark Finchem, a QAnon supporter who led the failed effort to overturn Biden’s victory and attended the Jan. 6 rally just ahead of the attack on the Capitol. Lake and Finchem, like Hamadeh, face several opponents in their respective primaries.

SOUTH CAROLINA GOVERNOR. Former Rep. Joe Cunningham defeated state Sen. Mia McLeod 57-31 to win the Democratic nomination to take on Republican incumbent Henry McMaster. The governor will be the favorite in a state where Team Blue last won a statewide race in 2006.

TEXAS GOVERNOR. Quinnipiac’s first Texas poll all year shows Republican Gov. Greg Abbott leading Democrat Beto O’Rourke just 48-43, a huge change from his 52-37 advantage in December. The school notes that this shift occurred following last month’s school massacre in Uvalde, which is also reflected in the fact that respondents say they trust Abbott over O’Rourke on “gun policy” by a 47-43 margin—an even bigger drop from 60-33 lead on this topic in Quinnipiac’s previous survey. These newest horserace numbers are also dramatically different than the 56-37 Abbott landslide that the Democratic firm Blueprint Polling recently found.

NEW YORK GOVERNOR. New York City Mayor Eric Adams on Wednesday endorsed Gov. Kathy Hochul two weeks ahead of the Democratic primary, a contest where Hochul has been the favorite all year.

OREGON GOVERNOR. Political consultant Bridget Barton, who took third place with 11% in last month’s Republican primary, announced this week she would back independent Betsy Johnson rather than support GOP nominee Christine Drazan. Barton explained her decision by declaring that, while Johnson will “stand up to Democrats,” Drazan “tends to run away from conflict.” Barton also argued that Johnson has a better chance to prevent Democrat Tina Kotek, whom she called “a woman who is dangerous,” from winning the governorship.

MICHIGAN GOVERNOR. “Republican gubernatorial candidate Ryan Kelley’s recent arrest by the FBI for his suspected involvement in the Jan. 6 insurrection at the U.S. Capitol appears to have boosted his name recognition and favorability among GOP voters in Michigan,” the Detroit Free Press reports.

“Kelley was arrested June 9. In a June 10-13 poll conducted for the Detroit Free Press and our outstate polling partners by EPIC-MRA of Lansing, 17% named Kelley as their preferred candidate for the August primary to determine which Republican candidate challenges Gov. Gretchen Whitmer in November.”

Chattah has sued to undermine the state’s pandemic response measures and has complained that the attorney general has done a poor job investigating (baseless, of course) voter fraud allegations. Team Blue very much wanted her as Ford’s opponent, though, as a Democratic group ran radio ads slamming Black over her 2015 donation to now-Democratic Gov. Steve Sisolak while calling Chattah a “MAGA conservative.” (Unlike similar efforts by Democrats elsewhere seeking to choose their opponents, these ads didn’t merely “attack” Chattah in a backhanded way but openly called for her election.)

ARIZONA 1ST CD. After airing some positive commercials ahead of the August Republican primary, self-funder Elijah Norton is now going up with a spot highlighting the ethics problems that dogged GOP incumbent David Schweikert during his ultimately successful 2020 re-election campaign. “How could anyone vote for David Schweikert?” asks one woman, before another castmate tells the audience that the congressman “was reprimanded unanimously by Congress.”

More people incredulously ask, “$250,000 in illegal contributions? A fake loan of $100,000?,” before the first woman informs the audience, “Schweikert even voted against building the border wall.” The second half of the commercial extols Norton as “a true conservative outsider who will secure our border.”

The Club’s man, physician Rich McCormick, also picked up an endorsement this week from former state Rep. Meagan Hanson, who took fourth place with 8% in the first round of voting on May 24. McCormick back then outpaced Evans, who is Trump’s endorsed candidate, 43-23 in a newly gerrymandered suburban Atlanta seat.

ILLINOIS 15TH CD. The United Association of Plumbers and Pipefitters Union, which often airs ads for Democratic candidates in general elections, is getting involved in the June 28 Republican primary with a spot that portrays far-right Rep. Mary Miller as a perennial tax delinquent. The narrator declares, “It was so bad that Miller had her business license revoked,” before the commercial concludes with an animation of a prison door slamming in front of her. The union, which has spent $520,000 so far in this race, does not mention Miller’s intra-party foe, fellow Rep. Rodney Davis.

NEW YORK 17TH CD. The Working Families Party announced Monday both that it was withdrawing its support for Democratic Rep. Sean Patrick Maloney and backing state Sen. Alessandra Biaggi’s primary bid against him in the new 17th District. The WFP supported Biaggi during her successful 2018 effort to deny renomination to turncoat Democratic state Sen. Jeff Klein, a move she says “gave my campaign legitimacy.”

MISSISSIPPI 3RD CD. Republican Rep. Michael Guest is finally going negative against Navy veteran Michael Cassidy a week after the challenger outpaced him in a 47.5-46.9 shocker in the first round of the primary. Guest’s narrator declares that Cassidy “just came to Mississippi from Maryland and only registered to vote here last year” and that he was “grounded and put under an investigation” when he was a Navy Reserve pilot. She concludes, “Mississippi doesn’t need a carpetbagger. We need a conservative. A conservative like Michael Guest.” Guest and Cassidy will compete again in their June 28 runoff.