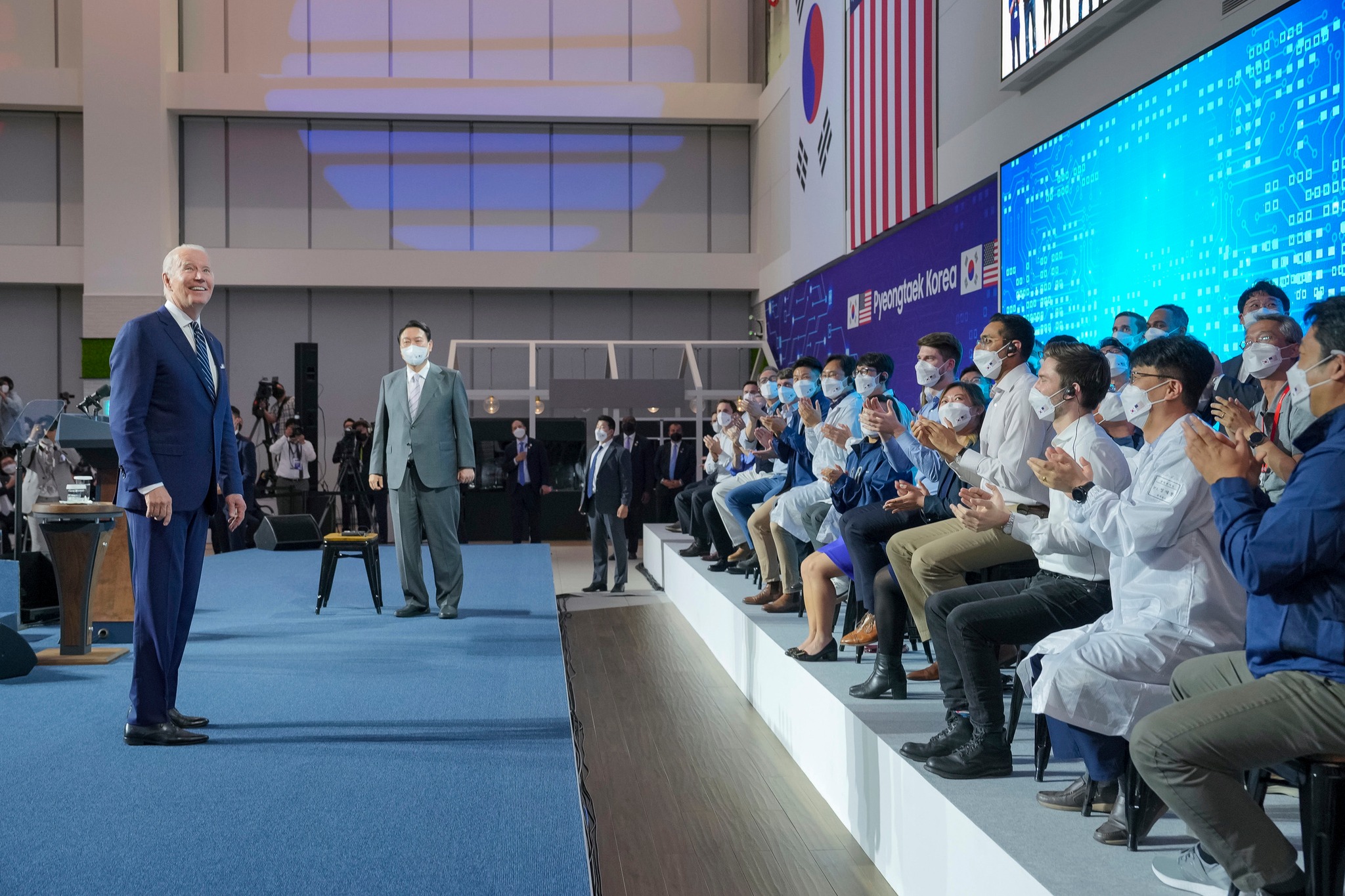 After a mass shooting, Republicans generally throw their hands up in the air and claim that well, nothing can really be done here, plus it’s the price we have to pay for Our Freedoms under the glory of America’s red, white and blue–but a vast majority of Americans aren’t drinking that water, according to a new CBS News/YouGov poll conducted after the Uvalde elementary school shooting.

A majority of Americans also aren’t buying into the idea that the country’s gun violence epidemic can be chalked up to mental health issues, not because there’s too many guns out there: 54 percent say that the U.S. has more mass shootings than many other countries because it has “more availability of guns,” while only 47 percent believe it’s because the U.S. has “more people with mental health issues.”

A new ABC News/Ipsos poll finds 80% of Americans say that inflation is an extremely or very important factor in how they will vote and for gas prices, it is 74%.

ARIZONA U.S. SENATOR. Arizona U.S. Senate hopeful and Trump endorsee Blake Masters (R) acknowledged that the United States has a gun violence problem. But he also has a theory about why there’s a problem — it’s the “Black people, frankly,” the Daily Beast reports.

The Daily Beast dug up a right-wing podcast interview with GOP Arizona Senate hopeful and Peter Thiel mentee Blake Masters from April 11, during which the far-right Trump endorsee argued that yes, the country has a gun violence problem, but “Black people, frankly” are responsible for it. That nugget of racism came moments after Masters complained that people ought to “stop obsessing about race all the time,” the context being Supreme Court Justice Ketanji Brown Jackson’s appointment, the Daily Beast notes.

Businessman Jim Lamon has unveiled a scorching ad ahead of the August GOP primary attacking Blake Masters, the former Thiel Capital chief operating officer who won Trump’s endorsement on Thursday, calling Masters an antisemite over various writings of his dating back to his college days.

The commercial points out where Masters once called World War II “unjust,” favorably cited a conspiracy theorist who peddled the century-old antisemitic trope that Zionist Jews are “promoting the New World Order,” shared an article on Facebook likening Israel to North Korea, praised the Unabomber, and referenced a “poignant quotation” from Nazi leader Hermann Goering. Not mentioned in the ad was new reporting about how Masters much more recently agreed with a podcast host in a May 25 appearance that campaign finance disclosure laws were “like Kristallnacht,” the infamous Nazi pogrom that set the stage for the Holocaust.

Meanwhile, a super PAC backed by Masters’ major benefactor Peter Thiel, a far-right tech billionaire who has put $13.5 million of his own money toward supporting Masters, has launched its own ad against Lamon that attacks him for the crime of … having done business in China, feeding into the same anti-Asian American sentiment that has contributed to the rise of hate crimes in the Trump era.

NORTH CAROLINA U.S. SENATOR. Multiple TV stations in North Carolina have taken down an NRSC attack ad due to its false claims about Democratic nominee Cheri Beasley during her time as the chief justice of the state Supreme Court. The spot in question refers to a “child porn offender” and says that Beasley “voted to set him free.” But Beasley did no such thing. Rather, she joined a majority opinion in 2019 that upheld a lower court ruling finding that the police had illegally searched a USB drive that belonged to the defendant, James Terrell. As CBS explains, Terrell was not freed as a result of the decision and in fact remained incarcerated until late last year.

This is the second NRSC ad to get yanked off the airwaves for falsehoods in the last couple of weeks: Recently, New Hampshire stations stopped airing a spot that wrongly claimed that Sen. Maggie Hassan had raised gas prices while she was governor. Ads like these are vulnerable to takedown demands because TV and radio stations can be held liable for defamatory content when it comes from third parties, which is why outside groups usually try to be very careful in the claims they make.

This time, however, the committee reacted with an angry threat after its sloppiness led to yet another unforced error. “This bizarre statement from a TV station that had yet to receive or even ask for our substantiation for the claim will be noted by our media buyers as they make future decisions about ad buys,” said a spokesperson. The threat is as idle as can be, though: If the NRSC halts future ad buys at stations it dislikes out of pique, it’ll only be limiting the number of voters it can reach.

NEVADA U.S. SENATOR and GOVERNOR. A new poll from the University of Nevada, Reno finds Democrats with wide advantages in the state’s marquee contests, but those gaps are likely due to greater name recognition on the part of incumbents compared to their potential challengers.

In her bid for a second term, Sen. Catherine Cortez Masto leads former state Attorney General Adam Laxalt 48-27 and businessman Sam Brown 47-24, but just 41% of GOP primary voters say they are “very” or “extremely” familiar with Laxalt and only 20% say the same about Brown. Meanwhile, Gov. Steve Sisolak is up 43-31 over Clark County Sheriff Joe Lombardo, 44-21 on former Sen. Dean Heller, and 43-17 on former professional boxer Joey Gilbert. Again, recognition among Republican voters is relatively low, with 48% saying they’re very or extremely familiar with Lombardo and everyone else below that.

PENNSYLVANIA U.S. SENATOR. Wealthy former hedge fund manager Dave McCormick has finally conceded the May 17 GOP primary to TV personality Mehmet Oz, who will now face Democratic Lt. Gov. John Fetterman this fall. While the ongoing primary recount is set to conclude on June 8, Oz led McCormick as of Friday by only 31.2-31.1 for a margin of just under 1,000 votes out of more than 1.3 million ballots cast.

Speaking of Fetterman, the NRSC’s first ad attacking the Democrat after his victory in last month’s primary is a predictable one. The spot, which is reportedly backed by a $1.5 million buy, claims Fetterman “sided with socialists,” “backed a government takeover of healthcare,” and “embraced parts of the Green New Deal that’d cost you 50,000 bucks a year.” (That last one cites to a study from a right-wing think-tank and reported by Fox News, of course.) The ad for some reason is framed around a bunch of fake Fetterman supporters banging on the sides of a campaign van and then pulling a bunch of silly signs out the back, including one that literally reads “Government Health Care” and is thoughtfully adorned with a caduceus.

WISCONSIN GOVERNOR. Donald Trump has endorsed wealthy businessman Tim Michels, who entered the GOP primary for governor fairly late but has been spending heavily to promote himself. Michels’ chief rival for the Republican nod, former Lt. Gov. Rebecca Kleefisch, responded by saying, “If I know one thing about President Trump, it’s that he likes winners, and I’m the only person in this race who has won statewide—not once, but four times.” Er, well, except he doesn’t like you?

ALABAMA U.S. SENATOR. Alabama U.S. Senate candidate Katie Britt (R) will not be participating in any debates with Mo Brooks (R) ahead of the Republican primary runoff in June, WVTM reports.

The Democratic Congressional Campaign Committee has made its first batch of fall TV ad reservations, featuring $21.5 million in bookings across 13 media markets in seven states. The reservations are aimed largely if not entirely at protecting Democratic-held seats. You can find our assessment of which districts these reservations are likely aimed at in our tracking spreadsheet, which includes earlier bookings from two major super PACs, the House Majority PAC on the left and the Congressional Leadership Fund on the right. The GOP’s official campaign arm, the NRCC, has yet to enter the fray.

MICHIGAN GOVERNOR. The Michigan Supreme Court on Friday turned down the lawsuits brought by James Craig, Perry Johnson and Michael Markey, three of the Republican gubernatorial hopefuls who were entangled in the fraudulent signatures scandal.

The top two finishers head to a November runoff.

“The candidate’s $24-million investment in television, radio and digital advertising more than tripled what Eric Adams spent in all of 2021 to become mayor of New York. Only one candidate in the nation — running for U.S. Senate in Illinois — has spent more this election season.”

TRUMP 2024. “Former President Donald Trump is bored at Mar-a-Lago and anxious to get back in the political arena — as a candidate, not a kingmaker — according to his advisers, who are divided over whether he should launch a third bid for the presidency as early as this summer,” NBC News reports.

“While many Trump confidants believe he should wait until after November’s midterm elections — and caution that he has not yet made a final decision about running — some say he could move more quickly to harness supporters and deny fuel to the busload of GOP hopefuls in his rearview mirror.”

“Two people in Trump’s orbit told NBC News they had been asked informally to hold July 4 as a date for a possible announcement.”

“Supporters on the fringes of former President Trump’s circle explored seeking sweeping authority after the 2020 election to enlist armed private contractors to seize and inspect voting machines and election data with the assistance of U.S. Marshals, according to a draft letter asking the president to grant them permission,” the Los Angeles Times reports.