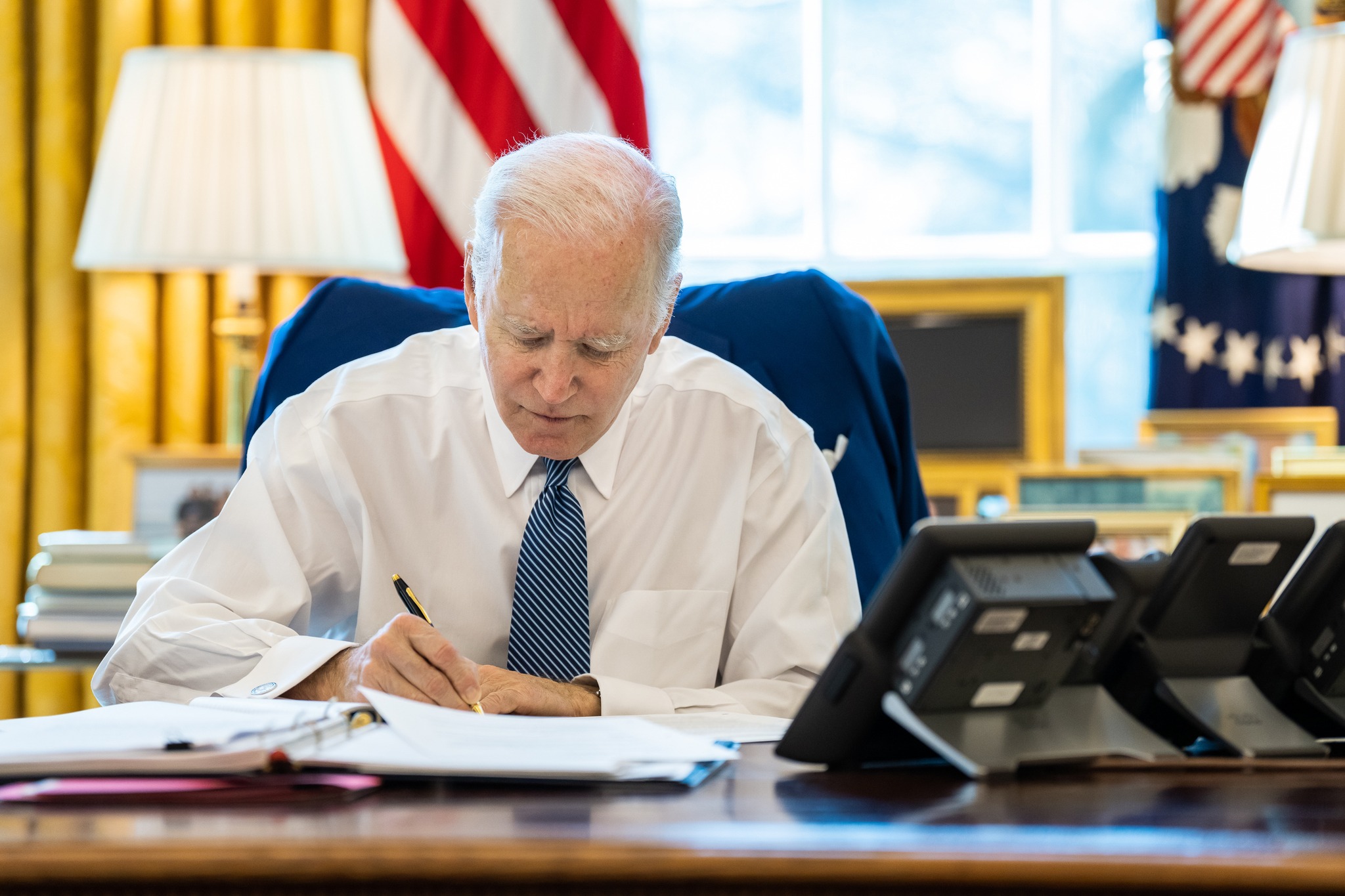 Rep. Liz Cheney (R-WY) told CBS News that there was an “extremely broad” and “extremely well-organized” conspiracy by then-President Donald Trump and his allies to overturn the results of the 2020 election — and that the Jan. 6, 2021, attack on the U.S. Capitol was just one instance in “an ongoing threat” to democracy.

She added: “And so, people must pay attention. People must watch, and they must understand how easily our democratic system can unravel if we don’t defend it.”

“The House’s Jan. 6 committee has turned to a renowned former network news executive to hone a mountain of explosive material into a captivating multimedia presentation for a prime-time hearing Thursday,” Axios reports.

“James Goldston — former president of ABC News, and a master documentary storyteller who ran ‘Good Morning America’ and ‘Nightline’ — has joined the committee as an unannounced adviser.”

The House Jan. 6 Committee’s members are at odds with each other over what kind of legislative recommendations to make in their final report on the Capitol insurrection, according to Axios. For example, Rep. Jamie Raskin’s (D-MD) reportedly been pushing hard to recommend doing away with the Electoral College altogether, something committee vice chair Liz Cheney (R-WY) flatly opposes.

“Former President Donald Trump has made it clear he is looking for cover from his closest allies around the upcoming public hearings by the House select committee investigating the January 6 insurrection — and some prominent names in Congress and the Republican Party are answering the call,” CNN reports.

“Trump’s team has communicated to some of his most loyal acolytes on Capitol Hill that the former President wants people vigorously defending him and pushing back on the select committee while the public hearings play out.”

Jennifer Senior begins a profile of Steve Bannon by reviewing the stream of text messages he’s sent to her.

“There are certainly enough of them. He says he has five phones, two encrypted, and he’s forever pecking away, issuing pronunciamentos with incontinent abandon—after midnight; during commercial breaks for his show, War Room; sometimes while the broadcast is still live.”

“You can discern much of Bannon’s mad character and contradictions in these exchanges. The chaos and the focus, the pugnacity and the enthusiasm, the transparency and the industrial-grade bullshit. Also, the mania: logomania, arithmomania, monomania (he’d likely cop to all of these, especially that last one—he’s the first to say that one of the features of his show is “wash rinse repeat”). Garden-variety hypermania (with a generous assist from espressos). And last of all, perhaps above all else, straight-up megalomania, which even those who profess affection for the man can see, though it appears to be a problem only for those who believe, as I do, that he’s attempting to insert a lit bomb into the mouth of American democracy.”

The Brookings Institution has released a comprehensive guide to this week’s hearings by the January 6 Committee.

“The issue of criminality is central to the congressional hearings commencing on June 9, 2022, convened by the House of Representatives’ Select Committee to Investigate the January 6th Attack on the United States Capitol. Pending the Committee’s own interim or final reports, this publication serves as a guide to the hearings and the evidence the Committee and prosecutors may adduce as to whether Trump and his circle committed crimes. The report covers key players in the attempt to overturn the election, the known facts regarding their conduct, and the criminal law applicable to their actions.”

Rep. Jamie Raskin (D-MD) said the House select committee investigating the Jan. 6, 2021, attack on the Capitol has found evidence on former President Trump that supports “a lot more than incitement,” The Hill reports.

Washington Post: “It will generate headlines, dominate prime time cable television and potentially capture the attention of the nation. But Democrats aren’t counting on the panel’s work and its focus on the attempt by former president Donald Trump and his allies to overturn the 2020 presidential election to help them much with voters this fall.”

“That view was articulated at a recent private meeting with House Democrats where Speaker Nancy Pelosi had a clear message for her conference: Voters will not cast their ballots based on Jan. 6 and the events that led up to that deadly day.”

“The charges expand the Justice Department’s allegations of an organized plot to unleash political violence to prevent the confirmation of President Biden’s election victory on Jan. 6, 2021, when a pro-Trump mob attacked the U.S. Capitol.”

Robert Reich: “Fast forward 49 years. This week, Baker’s role will be played by Cheney. Her Republican pedigree is no less impressive than Baker’s was: She is the elder daughter of former Vice President Dick Cheney and Second Lady Lynne Cheney. She held several positions in the George W. Bush administration. She is a staunch conservative. And, before House Republicans ousted her, she chaired the House Republican Conference, the third-highest position in the House Republican leadership.”

“Cheney’s responsibility this week will be similar to Baker’s 49 years ago — to be the steady voice of non-partisan common sense, helping the nation view the hearings as a search for truth rather than a “witch hunt,” as Trump has characterized them.”

“President Joe Biden and his aides have grown increasingly frustrated by their inability to turn the tide against a cascade of challenges threatening to overwhelm the administration,” Politico reports.

“Soaring global inflation. Rising fuel prices. Russia’s invasion of Ukraine. A Supreme Court poised to take away a constitutional right. A potentially resurgent pandemic. A Congress too deadlocked to tackle sweeping gun safety legislation even amid an onslaught of mass shootings.”

“In crisis after crisis, the White House has found itself either limited or helpless in its efforts to combat the forces pummeling them. Morale inside 1600 Pennsylvania Ave. is plummeting amid growing fears that the parallels to Jimmy Carter, another first-term Democrat plagued by soaring prices and a foreign policy morass, will stick.”

“I used to say in Barack’s administration: ‘Everything landed on his desk but locusts.’ Well, they landed on my desk.” — President Biden, quoted by The Guardian.

A New York Magazine profile of Sen. Dianne Feinstein (D-CA) concludes: “It seems clear that Feinstein is mentally compromised, even if she’s not all gone.”

The Senate is in session today, and the House will start tomorrow, so it’s possible we might maybe see some progress on gun reform perhaps. For what it’s worth, Sen. Chris Murphy (D-CT), who’s leading the Senate’s bipartisan talks over gun legislation, told CNN yesterday that he’s “more confident than ever” that lawmakers might reach a deal.

“The Senate group negotiating over a gun control package is trying to strike a deal by the end of this week,” Punchbowl News reports.

“This timeline shows the urgency with which the two sides are approaching the issue.”

UK Prime Minister Boris Johnson has survived a brutal coup attempt from his own party by winning a last-ditch vote on the fate of his premiership.

The narrow victory means the prime minister’s authority is in tatters, with 148 of his own lawmakers—41 percent of the parliamentary party—saying they have no confidence in him. That is worse than the no-confidence vote that ended Theresa May’s priemership.

“Conservative lawmakers dealt Prime Minister Boris Johnson of Britain a potentially lethal blow to his leadership on Monday when they triggered a no-confidence vote that could force him from power a little more than two years after his landslide election victory,” the New York Times reports.

Associated Press: “If Johnson […] wins, as seems more likely, he can’t face another challenge for a year under current party rules — though a narrow victory would leave him a hobbled leader whose days are likely numbered.”

The BBC explains the process.

“And Cohen’s credibility problem may also have played a role in Manhattan DA Alvin Bragg’s highly controversial decision to back off the prosecution of Trump himself.”

“Russian Foreign Minister Sergei Lavrov’s visit to Serbia has been cancelled after countries around Serbia closed their airspace to his aircraft,” Reuters reports.

John Pavlovitz: “I sense a corporate emotional weariness in kind people these days, the accumulated scar tissue created when you’ve absorbed more bad news, predatory behavior, and attacks on decency than your reserves can manage. Sustained cruelty will do that to the human soul.”

“There’s only so much contempt for humanity our minds are able to process, until one day something snaps and we lose the ability to respond with the same urgency and resilience we once had.  A low-grade hopelessness sets in, slowly replacing our activism with apathy and one day rendering us immobile: cruelty sickness.”

Josh Marshall: “To make the 2022 elections a referendum on Roe, Democrats have to put protecting Roe and abortion rights on the table.”

“Here’s one way to do that: get clear public commitments from every Senate Democrat (and candidate for Senate) not only to vote for the Roe bill in January 2023 but also to change the filibuster rules to ensure that a majority vote would actually pass the bill and send it to the White House for the president’s signature.”

“At present, there are likely 48 Senate Democrats who can make that pledge.”

“Elon Musk threatened to terminate his deal to buy Twitter in a letter accusing the company of not complying with his request for data on the number of spam and fake accounts on the social-media platform,” the Wall Street Journal reports.

Dan Pfeiffer: Why Elon Musk is making me get back on Facebook.

“The U.S. and South Korean militaries launched eight ballistic missiles into the sea Monday in a show of force matching a North Korean missile display a day earlier that extended a provocative streak in weapons demonstrations,” the AP reports.

“The tit-for-tat missile launches were aimed at demonstrating the ability to respond swiftly and accurately to North Korean attacks.”

“In an attempt to mobilize voters around the climate crisis, six climate advocacy groups are readying for the midterms with an arsenal of $100 million — the first coordinated spending of its kind,” CNN reports.

Denver Post: “Parts of Colorado, Wyoming and Utah are drying out due to climate-driven changes in stream flows, and these states will shift to become more like the most arid states of the Southwest, federal researchers found in a scientific study published last week.”

An Australian court ordered Google to pay a former lawmaker $515,000, saying its refusal to remove a YouTuber’s “relentless, racist, vilificatory, abusive and defamatory” videos drove him out of politics, Reuters reports.

“President Biden is likely to decide later this summer whether to partially forgive student-loan debt for millions of borrowers, after the president said more than a month ago that he would weigh in on the issue in the next couple of weeks,” the Wall Street Journal reports.

“The officials said Mr. Biden is likely to announce his plans in July or August, closer to when the pandemic-related pause in federal student loan payments is scheduled to lapse, as the president and his senior advisers continue to weigh the political and economic fallout of any such move.”