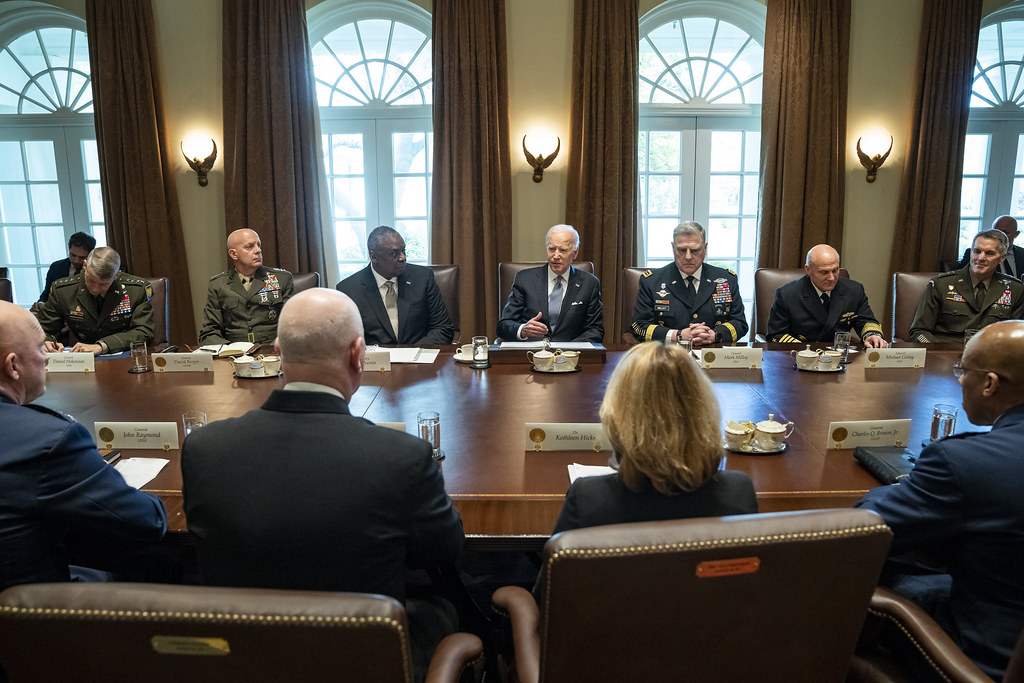 “Russian strategic bombers fired missiles at Kyiv from as far away as the Caspian Sea early on Sunday and explosions shook two of the Ukrainian capital’s eastern districts,” Reuters reports.

“Russia’s Foreign Ministry said it was summoning the heads of U.S. media outlets in Moscow to a meeting next Monday to notify them of tough measures in response to U.S. restrictions against Russian media,” Reuters reports.

Said a spokesman: “If the work of the Russian media – operators and journalists – is not normalized in the United States, the most stringent measures will inevitably follow.”

“Russia’s attack on Ukraine is redrawing the world’s energy map, ushering in a new era in which the flow of fossil fuels is influenced by geopolitical rivalries as much as supply and demand,” the Wall Street Journal reports.

“Over the past half-century, oil and natural gas have moved with relative freedom to the markets where they commanded the highest prices around the world. That ended abruptly when Russian tanks rumbled across the Ukraine border on Feb. 24, triggering a barrage of trade sanctions by the U.S. and Europe targeting Russia that have plunged global commerce into disarray.”

“After 100 days, Russia’s war on Ukraine is turning into a bloody slog with no end in sight, causing mounting devastation in Ukraine and prolonged costs world-wide,” the Wall Street Journal reports.

“The biggest conflict between European states since World War II has undergone swings of fortune that offer a reminder of war’s unpredictability. The failure of Russia’s early blitzkrieg fueled Ukrainian confidence that is ebbing as Russia concentrates its firepower on a narrower, grinding advance.”

New York Review of Books: “Russia is warming 2.5 times as fast as the world on average, and the Arctic is warming even faster. The cliché, avidly promoted by Moscow, is that the country will be a relative winner in climate change, benefiting from a melting and accessible Arctic shipping route, longer growing seasons, and the expansion of farmland into newly thawed areas.”

“Gustafson counters, with a dry but persuasive marshaling of facts, that in the redistribution of wealth and power that will result from climate change, Russia is doomed. After reading Klimat, Russia’s attack on Ukraine begins to look like the convulsion of a dying state.”

“Almost a year after the formation of the House select committee investigating the Jan. 6, 2021, attack on the U.S. Capitol, lawmakers are set to take their case public,” the Washington Post reports.

The former judge “was found zip-tied to a chair in his home and had been fatally shot.”

Rep. Tom Rice (R-SC), who voted to impeach Donald Trump, said he could possibly see voting for him again, Politico reports. Said Rice: “If he came out and said: I’m sorry I made a huge mistake on January 6th, then I might consider it.”

“If you’re a Republican, you can’t even lie to Congress or lie to an FBI agent or they’re coming after you.”  — Rep. Louie Gohmert (R-TX), on Newsmax.

“You know, it’s one thing to sort of watch the news and to read about what’s happened to our party… It is really another thing to be here, and to look, and see all these empty seats and not see another Republican here.” — Rep. Liz Cheney (R-WY), on CBS News, on what her father told her during the January 6 commemoration at the Capitol.

“The Justice Department has declined to prosecute two of Donald Trump’s closest White House advisers — former chief of staff Mark Meadows and social media director Dan Scavino — for refusing to cooperate with the Jan. 6 select committee, rejecting the House’s recommendation that the pair be charged with contempt of Congress,” Politico reports.

Rep. Denver Riggleman (R-VA), who worked as a technical adviser for the House select committee investigating the January 6, 2021, attack on the US Capitol, told CNN that he has left the Republican Party and that he will never run again as a Republican.

Said Riggleman: “What I’ve seen behind the scenes has pushed me further away. That the party has moved away from conservative principles to this cult of personality that Liz Cheney is talking about. She’s absolutely correct.”

Dan Balz: “In recent days, President Biden has spoken about guns on prime-time television and written for the Wall Street Journal (about inflation) and the New York Times (about Ukraine). He’s traveled to Uvalde, Tex., to grieve over the mass shooting that killed 19 children and two teachers. On Wednesday, he led a White House meeting to discuss the infant formula shortage. On Friday, he was out again, this time from Delaware, speaking about the economy and inflation.”

“In other words, the president seems to be everywhere. But to what end? It is something that worries Democrats heading toward the November midterm elections. But is it a problem of messaging or of policy, of words without impact or simply a sign of a weary and unhappy electorate that has stopped paying close attention to a president? Whatever it is, the political ramifications are serious. Biden has little time to figure it out, if it can be figured out, before voters render their judgment on his first two years in office.”

“Treasury Secretary Janet Yellen denied that she tried to decrease the size of the $1.9 trillion rescue package Democrats approved in early 2021, defending legislation that is now a focus of debate about the causes of currently high inflation,” the Wall Street Journal reports.

“Yellen’s statement comes after Bloomberg News reported that a forthcoming biography about Ms. Yellen states that she had sought to lower the amount of spending in the legislation.” That Bloomberg report stated that “Janet Yellen, worried by the specter of inflation, initially urged Biden administration officials to scale back the $1.9 trillion American Rescue Plan by a third, according to an advance copy of a biography on the Treasury secretary.” Writes Owen Ullman: “Privately, Yellen agreed with Summers that too much government money was flowing into the economy too quickly.”

Washington Post: “On Dec. 14, the pair seemed to make progress. Manchin had offered to support a $1.8 trillion package, a step toward the White House position, while Biden agreed to jettison a budget gimmick that Manchin believed disguised the true cost of the plan. The tenor of their conversations was ‘peachy,’ according to one person briefed on the talks, and the two sides agreed to put out a statement saying they would continue talking.”

“And then, incredibly, it all fell apart.”

Wall Street Journal: “Over the past week, business leaders have laid out in the starkest terms yet that a period of universal strength in the U.S. economy has given way to a muddled outlook in which a labor shortage, soaring stock markets and a healthy consumer are no longer givens.”

Bob Woodward and Carl Bernstein: “Donald Trump not only sought to destroy the electoral system through false claims of voter fraud and unprecedented public intimidation of state election officials, but he also then attempted to prevent the peaceful transfer of power to his duly elected successor, for the first time in American history.”

“Dr. Anthony Fauci took a barely veiled swipe at former President Donald Trump and Republicans during a college commencement speech Friday — just two days after claiming he wouldn’t ‘get involved in any politics’ related to the 2024 election,” the New York Post reports.

Said Fauci: “While genuine differences of opinion or ideology are part of a healthy society, increasingly we are hearing, reading and seeing outlandish statements and pronouncements propped up by deliberate distortions of reality.”

He added: “Fabrications, conspiracy theories and outright lies are becoming commonplace from radical fringe groups as well as from people who you would hope would know better — and you know who they are.”

“Abbott Nutrition has restarted production at the Michigan baby formula factory that has been closed for months due to contamination, taking a step toward easing a nationwide supply shortage expected to persist into the summer,” the AP reports.

“After two decades of research and experimentation, Israeli defense officials now say they have a working prototype of a high-powered laser gun that can intercept rockets, mortar shells, drones and anti-tank missiles in flight,” the New York Times reports.

“Officials said that the system performed successfully in a recent series of live fire tests in the southern Israeli desert, destroying a rocket, a mortar shell and a drone, and prompting a standing ovation from officials watching the action onscreen.”

“Major Republican donors, including some who have contributed to Gov. Greg Abbott’s campaigns, joined other conservative Texans in signing an open letter supporting congressional action to increase gun restrictions in response to the mass shooting in Uvalde that left 19 children and two teachers dead last week,” the Dallas Morning News reports.

“The letter, which is running as a full-page ad in The Dallas Morning News on Sunday, endorses the creation of red-flag laws, expanding background checks and raising the age to purchase a gun to 21.”

“As the Supreme Court rounds the final weeks of the term it has yet to decide an unusually high number of cases including disputes over abortion, gun rights, religious liberty, immigration and the environment — issues that deeply divide the public and exacerbate the ideological split on the 6-3 conservative-liberal court,” CNN reports.

“June is always a fraught time at the court, as several justices have openly acknowledged in speeches over the years. But this spring is different. Not only are the nine judges reshaping contours of social issues that drive the public debate, but they are also working to salvage the institutional legitimacy of their own branch of government.”

Former President Donald Trump lashed out at former House Speaker Paul Ryan and called him a “pathetic loser” after Ryan said that more House Republicans would have voted to impeach Trump if they’d had the “guts,” Insider reports.

“North Korea fired eight short-range ballistic missiles Sunday, pushing it to a record number of launches in a single year under Kim Jong Un, who appears ready to further ratchet up tensions with his first test of a nuclear device since 2017,” Bloomberg reports.

“The Michigan Supreme Court dealt a fatal blow to GOP gubernatorial candidates’ last-ditch attempts to land a spot on the August primary ballot after a signature forgery scandal brought their campaigns to an end,” the Detroit Free Press reports.

Al-Qaida has a haven in Afghanistan under the Taliban and “increased freedom of action” with the potential of launching new long-distance attacks in coming years, The Guardian reports.