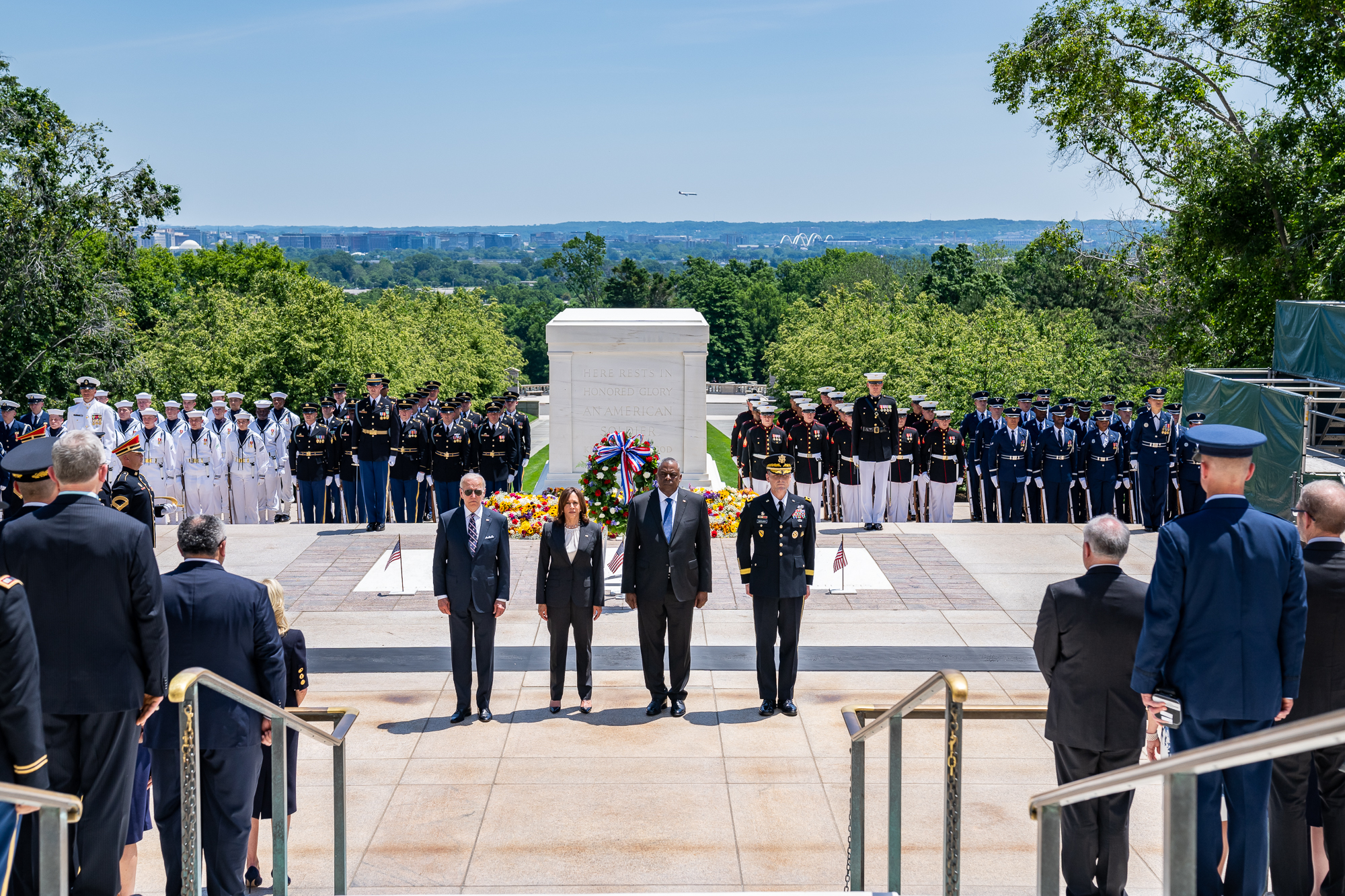 The crowd booed Texas Gov. Greg Abbott (R) as he arrived at the memorial outside of Uvalde Elementary School where 21 people were gunned down last week.

In contrast, the crowd cheered for President Biden and First Lady Jill Biden.

“President Joe Biden and first lady Jill Biden are hoping to console a city stricken by grief and anger when they meet with families affected by the mass shooting at a Texas elementary school that killed 19 students and two teachers,” the AP reports.

“The visit to Uvalde on Sunday is Biden’s second trip in as many weeks to comfort a community in mourning after staggering loss. On May 17, he was in Buffalo, New York, to meet with victims’ families and condemn white supremacy after a shooter espousing the racist ‘replacement theory’ killed 10 Black people at a supermarket.”

The New York Times has a very informative and powerful visual timeline of the 78 minutes it took police in Uvalde, Texas to storm that elementary school classroom. That’s the whole post. Go look at it.

Playbook: “There’s no doubt that Trump’s endorsement power has waned, but could his words shaming anyone looking at gun restrictions chill fledgling bipartisan talks on Capitol Hill? We’ll soon find out. These talks already face a serious uphill climb, coming just months before the midterms.”

“We all know they want total gun confiscation, know that this would be a first step. Once they get the first step, they’ll take the second step, the third, the fourth, and then you’ll have a whole different look at the Second Amendment.”  — Donald Trump, quoted by the Washington Post, at the NRA convention in Texas.

The New York Times quotes from a conversation between then-President Donald Trump with his acting chief of staff Mick Mulvaney, after a far-right gunman killed 23 people at a Walmart store in El Paso in 2019.

TRUMP: What are we going to do about assault rifles?

MULVANEY: Not a damn thing.

MULVANEY: Because, you would lose.

Washington Post: “The Standard Gravure massacre provided an early glimpse of how McConnell — now the Republican Senate minority leader — would handle mass shootings and their aftermath over the next three decades, consistently working to delay, obstruct or prevent most major gun control legislation from passing Congress.“

“McConnell would go on to follow a similar playbook time and time again during his seven terms in Congress, offering vague promises of action, often without any specifics, only to be followed by no action or incremental measures that avoided new gun regulations. As a Republican leader, he also helped dissuade his conference — as after the 2012 mass shooting at Sandy Hook Elementary School in Newtown, Conn. — from supporting gun legislation and, as majority leader, refused to bring up significant gun control measures for a vote.”

Said Biden: “McConnell is a rational Republican. Cornyn is as well. I think things have gotten so bad that everybody is getting more rational about it.”

“Gov. Greg Abbott said Wednesday that the Uvalde school shooter had a ‘mental health challenge’ and the state needed to “do a better job with mental health” — yet in April he slashed $211 million from the department that oversees mental health programs,” NBC News reports.

“In addition, Texas ranked last out of all 50 states and the District of Columbia for overall access to mental health care.”

Sen. Ron Johnson (R-WI), who has taken more than $1 million in campaign contributions from the National Rifle Association, ran into a locked door as he tried to dodge CNN’s questions about gun legislation.

“In the wake of two massacres that have killed 31 people in less than two weeks, the chairwoman of the House Committee on Oversight and Government Reform has launched an investigation into gun manufacturers,” the Washington Post reports.

Rep. Mo Brooks (R-AL) told Fox News that he is opposed to any new restrictions on guns — even regarding military-style assault weapons — because we need them to “take back” our government. Brooks exploded at the Fox News host when she insisted there was no evidence that the 2020 election was rigged.

Brooks blamed the decline of “moral values” in the U.S. for mass shootings that have devastated the country, The Hill reports. Said Brooks: “If we teach proper moral values and if we teach respect for human life, then that is the way to fix the problem.”

“The Biden administration is expected to announce as early as next week it will send to Ukraine long-range rocket systems Kyiv says are necessary to fight off the Russian onslaught in the Donbas region,” the Wall Street Journal reports.

President Volodymyr Zelensky said he fired a top Ukrainian Security Service official for “thinking only of himself” as Russian forces tried to seize Kharkiv, Insider reports.

Jonathan Bernstein: “What I do know is that that Democrats are a normal U.S. political party, which means that they are mainly pragmatic problem-solvers. That is, what US political parties are usually good at is finding out what makes their constituents unhappy and attempting to do something about it. They listen to voters in their districts; to the party coalition that nominates them; to their strongest supporters. Some of their solutions may turn out to be highly ideological. Some are not. They’re generally willing to cut deals to pass something, figuring that something is better than nothing. If it doesn’t have the votes, or it’s implemented and it doesn’t work, they’ll try something else…”

“What’s gone horribly wrong is that one of the two major parties, the Republican Party, has mostly abandoned all of that.”

Politico excerpts the untold story of how a group of Republicans tried to expose “a nefarious homosexual network” within Ronald Reagan’s presidential campaign on the eve of the 1980 Republican convention.

The book from which this is excerpted, Secret City: The Hidden History of Gay Washington by James Kirchick, looks worth reading.

“Big-city population declines deepened across the U.S. last year as the pandemic continued sending Americans in search of more space,” the Wall Street Journal reports. “The largest cities lost a greater share of residents than small- and midsize cities during the year that ended July 1, 2021, new estimates show. Collectively, in the nine cities with more than one million people, the population fell 1.7%, a loss of 419,000 residents. Only two cities in that group grew: Phoenix and San Antonio.”

“A judge has denied the latest request by Enrique Tarrio, the former top leader of the right-wing group the Proud Boys, for release from jail while he awaits trial on criminal charges relating to last year’s attack on the U.S. Capitol,” Reuters reports.

Former President Donald Trump called the insurrection on January 6, 2021, a hoax, The Guardian reports. Said Trump: “As one of the nation’s leading proponents of the insurrection hoax, Liz Cheney has pushed a grotesquely false, fabricated, hysterical partisan narrative.” He added: “Look at the so-called word insurrection, January 6 – what a lot of crap.”

Attorney General Merrick Garland warned about threats to democracy in the U.S. and abroad in a commencement speech at Harvard University on Sunday, Axios reports.

“Mr. Manchin, a Democrat from West Virginia, and Mr. Schumer, a Democrat from New York, have held a series of meetings in recent weeks on a package focused on lowering prescription drug costs, raising taxes and bolstering energy production in the U.S.”

“While the substance of those conversations remain closely held, some Democrats and outside analysts now expect a possible agreement could raise roughly $1 trillion in revenue and spend about $500 billion over a decade. With roughly half the new revenue dedicated toward reducing the deficit, the spending would focus on tax incentives for reducing carbon emissions and some support for fossil fuels, as well as an extension of subsidies for purchasing health insurance under the Affordable Care Act.”

“Jurors are slated to hear closed-door testimony from Secretary of State Brad Raffensperger on Thursday, according to his subpoena.”

“As many as 50 witnesses are expected to be subpoenaed by a special grand jury that will begin hearing testimony next week in the criminal investigation into whether former President Donald Trump and his allies violated Georgia laws in their efforts to overturn his 2020 election loss in the state,” the New York Times reports.

“The process, which is set to begin on Wednesday, is likely to last weeks, bringing dozens of subpoenaed witnesses, both well-known and obscure, into a downtown Atlanta courthouse bustling with extra security because of threats directed at the staff of the Fulton County district attorney, Fani Willis.”

“Cawthorn revealed that he bought between $100,001 and $250,000 worth of ‘Let’s Go Brandon’ cryptocurrency on Dec. 21. The transaction came eight days before he wrote a Dec. 29 Instagram post that said, ‘Tomorrow we go to the moon,’ in response to a photo of him posing with co-founders of the coin.”

“Bonefish off the coast of Florida have tested positive for a cocktail of pharmaceutical drugs, including anti-depressants and blood pressure medications,” CNN reports.

“The Senate Judiciary Committee on Thursday advanced the nomination of Judge Michelle Childs for a post on the nation’s second-highest court on a 17-5 bipartisan vote,” Politico reports.

Newly disclosed documents reveal secret executive plans for apocalyptic scenarios when the president may activate wartime powers for national security emergencies, including shutting down the internet, the New York Times reports.  None of the plans have been shown to Congress.

North Carolina Attorney General Josh Stein (D) had a “minor stroke” on Monday night and is recovering in the hospital, the Raleigh News & Observer reports.

Rep. Marjorie Taylor Greene (R-GA) was mocked for blundering the term “Petri dish” while floating a claim that the government wants surveillance on everything Americans do, including when people go to the bathroom and eat cheeseburgers, Mediaite reports.

Said Greene: “The government totally wants to provide surveillance on every part of your life. They want to know when you’re eating. They want to know if you’re eating a cheeseburger, which is very bad because Bill Gates wants you to eat his fake meat that grows in a peach tree dish. So you’ll probably get a little zap inside your body that’ll say ‘No, no, don’t eat a real cheeseburger, you need to eat…the fake meat from Bill Gates.”

Playbook: “Trump is like a standup comedian. He uses rallies, especially in the offseason, to work on material. He tests the reaction among his diehard fans and watches the mainstream media’s coverage. He then rewrites the lines, calibrating them for maximum effect inside the arena and minimal blowback outside of it. You can tell he believes he’s onto something with his mocking of trans people.”

“There is a cynical strategy at work here. Targeting marginalized groups for ridicule forces more responsible actors to stand up for them. As Democrats have learned, Trump’s goal is to get them to spend their time outraged and defending the targets of his attacks rather than talking about their own message.”

“This dynamic creates a built-in political advantage to any party that no longer sees it as taboo to scapegoat certain groups. Trump, of course, knows this and he has found a new target for 2022 — and perhaps beyond.”

The husband of Speaker Nancy Pelosi (D-CA) was arrested late Saturday night for driving under the influence, TMZ reports.