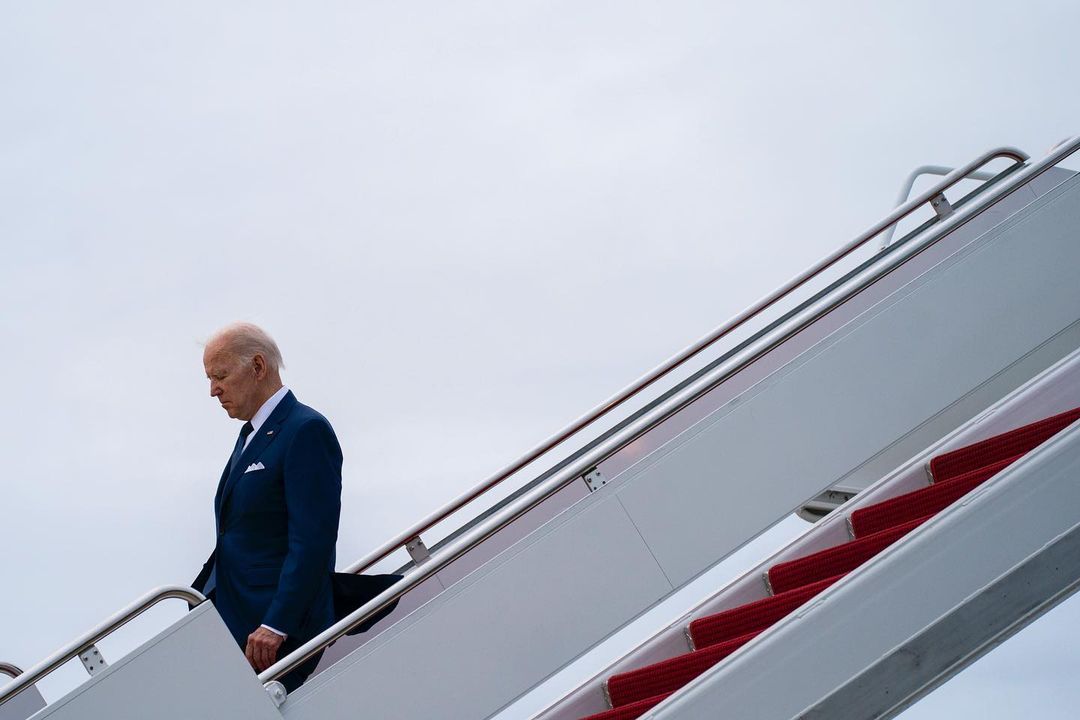 President Biden will travel to Uvalde, Texas on Sunday to “grieve with the community that lost twenty-one lives in the horrific elementary school shooting,” USA Today reports.

“Ukrainian President Volodymyr Zelensky dismissed suggestions that his country should cede territory to Russia in return for peace, comparing them to attempts to appease Nazi Germany, as Russia stepped up its attacks in Ukraine’s east,” the Wall Street Journal reports.

David Sanger: “In recent days, presidents and prime ministers as well as the Democratic and Republican Party leaders in the United States have called for victory in Ukraine. But just beneath the surface are real divisions about what that would look like — and whether ‘victory’ has the same definition in the United States, in Europe and, perhaps most importantly, in Ukraine.”

David Ignatius: “The first instruction that Secretary of State Antony Blinken got from President Biden was to ‘reset’ America’s alliances and partnerships abroad so that the United States could deal with the challenges ahead. That strategy would prove decisive in combating Russia’s aggression against Ukraine.”

“Blinken and other officials gave me new details this week, describing a series of behind-the-scenes meetings over the past year that helped forge the U.S.-led coalition to support Ukraine. His narrative validates President Dwight D. Eisenhower’s observation in a 1957 speech: ‘Plans are worthless, but planning is everything.’”

“The Biden administration’s secret planning began in April 2021 when Russia massed about 100,000 troops on the Ukrainian border. The buildup turned out to be a feint, but Blinken and other officials discussed U.S. intelligence about Russia’s actions with leaders of Britain, France and Germany at a NATO meeting in Brussels that month. Their message was, ‘We need to get ourselves prepared,’ a senior State Department official said.”

“Hundreds of thousands of Ukrainians have been processed through a series of Russian ‘filtration camps’ in Eastern Ukraine and sent into Russia as part of a systemized program of forced removal,” CNN reports.  “After being detained in camps operated by Russian intelligence officials, many Ukrainians are then forcibly relocated to economically depressed areas in Russia, in some cases thousands of miles from their homes, and often left with no means of returning.”

“An important measure of consumer prices showed that inflation slowed in April, but remained close to a four-decade high,” the New York Times reports.

“The Personal Consumption Expenditures price index rose 0.2% last month from March and was up 6.3% from a year earlier… That is down from a 6.6% annual increase in March, which represented the fastest pace of inflation since 1982.”

“Scott Pruitt, while in charge of the Environmental Protection Agency during the Trump administration, repeatedly pressured his federal security officers to drive at excessive and sometimes dangerous speeds on routine trips, with sirens and emergency lights on, because he had a habit of running late, according to a federal report released on Thursday,” the New York Times reports.  “The security officers said they knew this was a violation of federal policies and ‘endangered public safety,’ the report said.”

“The US and Taiwan are planning to announce negotiations to deepen economic ties, people familiar with the matter said, in a fresh challenge to Beijing, which has cautioned Washington on its relationship with the island,” Bloomberg reports.  “The talks would focus on enhancing economic cooperation and supply-chain resiliency, falling short of a traditional free-trade agreement, according to the people. The deal is likely to include areas of trade facilitation, supply-chain work and trade in agricultural products, they said, speaking on condition of anonymity ahead of a public announcement.”

Yascha Mounk: “As someone who lived in many countries—including Germany, Italy, France, and the United Kingdom—before coming to the United States, I have long had the sense that American levels of partisan animosity were exceptionally high. Although I’d seen animosity between left and right in other nations, their hatred never felt so personal or intense as in the U.S.”

“A study just published by the Carnegie Endowment for International Peace confirms that impression… The authors’ conclusion is startling: No established democracy in recent history has been as deeply polarized as the U.S.”

“Prime Minister Boris Johnson presided over an office in which there were widespread violations of coronavirus restrictions, according to a long-awaited government investigation released on Wednesday,” the New York Times reports.  “The report, by a senior civil servant, Sue Gray, included multiple photographs of Mr. Johnson raising a glass at a birthday party held in his honor, which breached the rules and for which he paid a police fine. It noted that 83 people violated the rules at parties, at which some drank heavily and damaged property.”

The Guardian: Vomiting and partying until 4 a.m.

Jonathan Last: “I’ve been saying since November 2020 that, barring a health event, Biden will run for re-election in 2024 for one simple reason: There is no other option.”

“The Democratic coalition is currently made up of a giant mass of factions, some of which are in tension. They cannot win the presidency without getting close to 52 percent of the popular vote and even that margin gives them only about a 50-50 shot of winning the Electoral College.”

“Democrats need to hold together (and turn out) progressives, African Americans, young voters, women, Hispanics, and college-educated suburban voters. They need to do this without losing even more ground to white, high-school-educated men.”

“Joe Biden is the only Democrat even theoretically capable of shouldering this burden.”

Hungary Prime Minister Viktor Orban “will assume emergency powers in order to be able to respond more quickly to challenges created by the war in neighbouring Ukraine,” Reuters reports.

Turkey president Recep Tayyip Erdoğan said he “no longer recognized the existence of the leader of neighboring Greece and would not meet him at a planned summit this year, threatening to deepen a crisis within NATO over Turkey’s opposition to the alliance’s expansion,” the Financial Times reports.

Japan aims to “drastically strengthen” its defense capabilities, as officials worry that Russia’s invasion of Ukraine could prompt instability in East Asia, the Japan Times reports.

“North Dakota Secretary of State Al Jaeger (R) announced that a proposed measure to raise the threshold for amending the state constitution will not appear on the November ballot after thousands of signatures failed to meet legal standards,” the Fargo Forum reports.  “In a letter to the measure’s sponsoring group, the state’s top election official also alleged that several signature gatherers committed fraud.”

“Anaheim Mayor Harry Sidhu announced that he was stepping down after being accused of bribery, fraud, obstruction of justice and witness tampering in an affidavit supporting a search warrant application earlier this month,” the Los Angeles Times reports.  It’s the latest fallout “from a sprawling federal public corruption investigation linked to the proposed sale of Angel Stadium and allegations that a secretive ‘cabal’ controlled Anaheim’s politics.”

“Eight years after New York City’s failed attempt to host the Democratic National Convention, Mayor Eric Adams is giving it another shot,” Politico reports.  “The Democratic mayor is entering a national contest with his counterparts from Chicago, Atlanta and other cities to host the presidential nominating convention in 2024.”

“When Lara Logan reached the heights of American journalism more than a decade ago, as the chief foreign affairs correspondent for CBS News, her bosses didn’t think twice about sending her to cover the biggest stories in the world. Producers clamored to work with her as she landed interviews with a Taliban commander, chronicled the Arab Spring and tracked the Ebola outbreak. Former President Barack Obama called her to wish her well after the most traumatic event of what seemed like a limitless career: She was sexually assaulted while covering a demonstration in Cairo’s Tahrir Square in 2011,” the New York Times reports.  “But today Ms. Logan cuts a far different figure in American media. Instead of on national news broadcasts, she can be found as a guest on right-wing podcasts or speaking at a rally for fringe causes, promoting falsehoods about deaths from Covid vaccines and conspiracy theories about voter fraud.”

Speaker Nancy Pelosi (D-CA) responded after San Francisco’s Catholic archbishop decided to deny her Communion over her support for abortion access in the United States, USA Today reports.  Said Pelosi: “I respect people’s views about that. But I don’t respect us foisting it onto others.”  She also added: “I wonder about the death penalty, which I am opposed to. So is the church, but they take no action against people who may not share their view.”

In Texas’ 28th District, conservative Rep. Henry Cuellar (D-TX) is running neck-and-neck with progressive challenger Jessica Cisneros (D) in one of the most scrutinized Democratic primaries of the night. As of shortly after midnight, Cuellar — one of the only Democrats in Congress who opposes abortion rights — led by fewer than 200 votes, Politico reports.  “The fact that the left couldn’t easily dislodge Cuellar following news about the likely overturning of Roe v. Wade in a state filled with Republicans eager to end abortion access could signal a problem for Democrats: Many are eager to run on abortion rights and fears about overturning Roe, but it’s unclear whether their own base is sufficiently motivated by this issue.”

Colorado gubernatorial candidate Greg Lopez (R), who hopes to unseat Gov. Jared Polis (D) this November, “said in a Republican primary debate over the weekend that he would have a No-Jews, No-Muslims, No-Atheists policy when it comes to selecting his potential Lt. Governor,” Next reports.  He said would only consider other Christians.