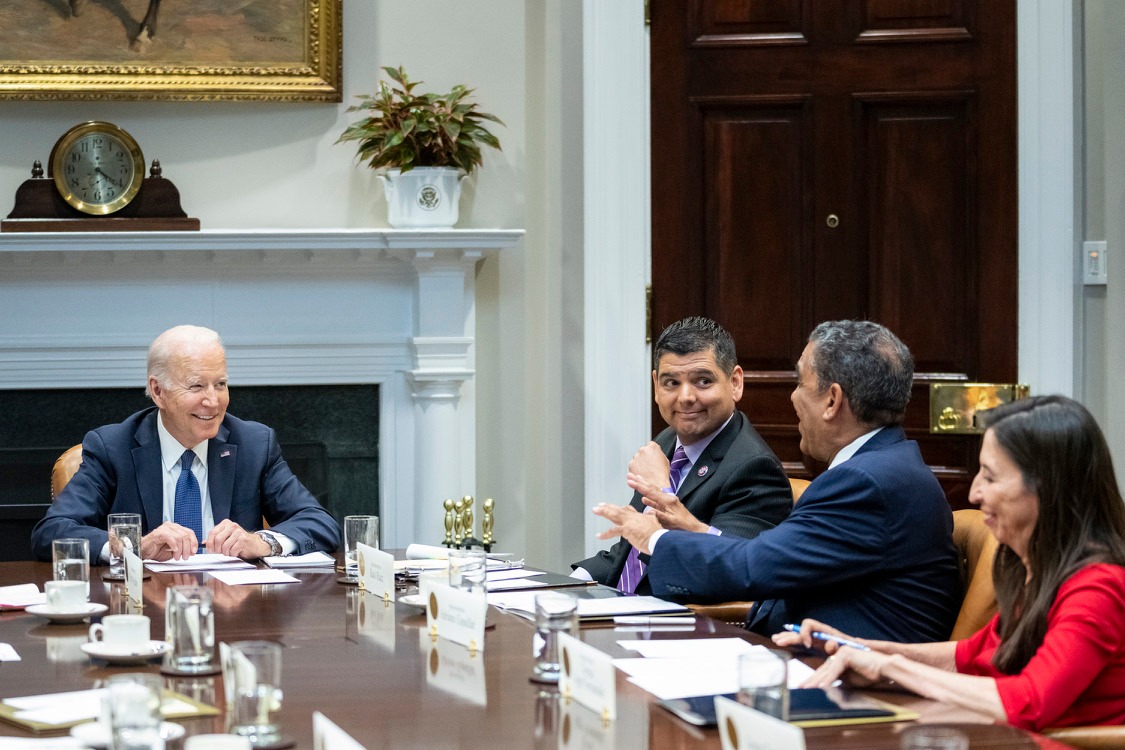 The Hill: “The 79-year-old Democrat and his closest allies say he wants a second White House term and plans to run again. Biden told former President Barack Obama he intends to launch another bid.”

“But that hasn’t silenced the whispered questions about whether he will do so given his age — he will be 81 in November 2024 — and his rocky approval ratings.”

CALIFORNIA U.S. SENATOR and GOVERNOR. Tech company CEO Dan O’Dowd attracted some attention last month when he launched a self-funded ad campaign full of commercials attacking billionaire Elon Musk (who is not a candidate for Senate), but SurveyUSA finds that very few voters are interested in supporting O’Dowd’s long-shot bid against his fellow Democrat, Sen. Alex Padilla. The poll, conducted on behalf of KGTV-TV San Diego and the San Diego Union-Tribune, shows the incumbent with a 36-9 lead over Republican James Bradley, who badly lost as the 2020 nominee in the old 33rd District against Democratic Rep. Ted Lieu; O’Dowd, by contrast, nabs a mere 1%.

The concurrent special election for the final two months of Kamala Harris’ Senate term is little different, with Padilla up 40-11 over his nearest GOP foe, attorney Mark Meuser, whom Padilla trounced in a landslide for secretary of state in 2018. O’Dowd does better in the smaller field, though he’s still barely a presence with just 6% of the vote.

SurveyUSA also inspects the governor’s race and shows Democratic Gov. Gavin Newsom taking 40% as state Sen. Brian Dahle, who has the state GOP’s backing, and businessman Ronald Anderson tie for second place at 7% each. This is one of the first polls we’ve seen of any of these races since the ballot was finalized in March.

MISSOURI U.S. SENATOR. Two new polls agree that disgraced former Gov. Eric Greitens is a serious contender in the August Republican primary, but they diverge on whether he has a notable lead or is in third place. In the former camp is SurveyUSA’s poll for Gray Television that shows Greitens with a 26-17 lead over state Attorney General Eric Schmitt as Rep. Vicky Hartzler takes 11%; fellow Rep. Billy Long earns just 7%, and 28% of voters remain undecided.

However, Missouri Scout has also released a primary survey from GOP firm Remington Research Group, whose parent company also works for Schmitt, that finds Schmitt beating Hartzler 29-23 while Greitens is close behind at 21%. The handful of polls taken so far this year have disagreed over which candidate has the advantage, variously finding leads for Schmitt and Greitens while Hartzler often remains close behind.

On the Democratic side, SurveyUSA shows a large 63% majority of voters have yet to make up their minds, while Marine veteran Lucas Kunce holds just a 10-8 edge over wealthy philanthropist Trudy Busch Valentine. Looking forward to hypothetical general election matchups, the poll finds Schmitt and Hartzler leading either Democrat by anywhere from 45-31 to 44-33. By contrast, Greitens fails to crack double digits and holds just a 43-37 edge over Busch Valentine and a similar 42-36 lead over Kunce.

NEW HAMPSHIRE U.S. SENATOR. The NRSC has launched a new ad as part of its opening seven-figure buy that goes after Democratic Sen. Maggie Hassan for voting against natural gas drilling and for raising gas taxes when she served as governor, blaming her for rising energy prices.

NORTH CAROLINA U.S. SENATOR. The conservative Carolina Partnership for Reform has unveiled a Meeting Street Insights poll done just before the primary that finds Republican Rep. Ted Budd leading 46-45 against former Democratic state Supreme Court Chief Justice Cheri Beasley, who each won their respective primaries on Tuesday. There have been few general election polls by reliable firms here this year, but these numbers are very similar to a Global Strategy Group internal that Beasley released earlier this month showing a 45-45 tie and a late-March survey by GOP pollster Cygnal that showed Budd up 45-43.

ILLINOIS 6TH CD. Democratic Rep. Marie Newman begins her opening ad for her June 28 primary against fellow incumbent Sean Casten by confiding to the audience, “When I was 19, I made the very difficult decision to have an abortion. I just wasn’t ready to start my family.”

After she talks about her 2020 primary win over incumbent Dan Lipinski, who she calls “one of the last anti-choice Democrats in Congress,” Newman continues, “My opponent now is Sean Casten, who voted for anti-choice Republicans like George Bush.” Casten, E&E News wrote in 2020, cast his first vote for George H.W. Bush in 1992 when he was 20 and supported Bob Dole four years later.

FLORIDA 15TH CD. Former Secretary of State Laurel Lee said Tuesday that she was joining the crowded Republican primary for this new seat in the eastern Tampa suburbs, an announcement that came days after she stepped down as Florida’s chief elections officer. Lee is the wife of former state Sen. Tom Lee, who was mentioned as a potential candidate himself before she got in. Laurel Lee previously served as a local judge before Gov. Ron DeSantis appointed her secretary of state in 2019.

MARYLAND 4TH CD. Former Rep. Donna Edwards has disclosed a Lake Research Partners internal ahead of the July Democratic primary that shows her holding a wide 45-24 advantage over former Prince George’s County State’s Attorney Glenn Ivey in her bid to take back her former House seat, while former Del. Angela Angel barely registers with 4%. This is the first poll we’ve seen here in this dark-blue district.

HAWAII 2ND CD. Despite previously filing with the FEC for a bid, Honolulu City Council Chair Tommy Waters has announced that he won’t run to succeed fellow Democrat Kai Kahele after all. Currently, the Democratic field consists of former state Sen. Jill Tokuda and state Rep. Patrick Branco, and the June 7 deadline for candidates to file is fast approaching.

“Daniel Goldman, who was the House Democrats’ lead counsel on the first impeachment of President Donald Trump, is now considering a run for Congress in an open seat spanning Lower Manhattan and neighborhoods in western Brooklyn,” City & State reports.

New York Times: “The once-a-decade congressional redistricting process is almost always an exercise in raw political power, particularly in a state like New York, which this year must shed a seat overall to account for population losses.”

“But if New York’s redistricting cycle began this year with an attempt by Democrats to marginalize Republicans, it now appears destined to end in intense infighting among Democrats as the Aug. 23 primary approaches — thanks to a ruling last month by the state’s highest court declaring the Democrat-led Legislature’s maps unconstitutional.”

“Republican candidates in upcoming primaries may have a tougher time scoring a coveted endorsement from Donald Trump, according to the former President’s allies, who say he is feeling more risk-averse amid the deadlocked Senate GOP contest in Pennsylvania,” CNN reports.

“Facebook has not yet released a new public policy strategy for the November midterms to refresh and update its rules and tools to protect the elections, something it traditionally touts,” the Washington Post reports.

“And former employees, some of whom spoke on the condition of anonymity to discuss sensitive matters, said they worry that the social media company is already lagging far behind where it needs to be to prevent the spread of misinformation from hurting voters’ understanding and behavior in the primaries and general election.”