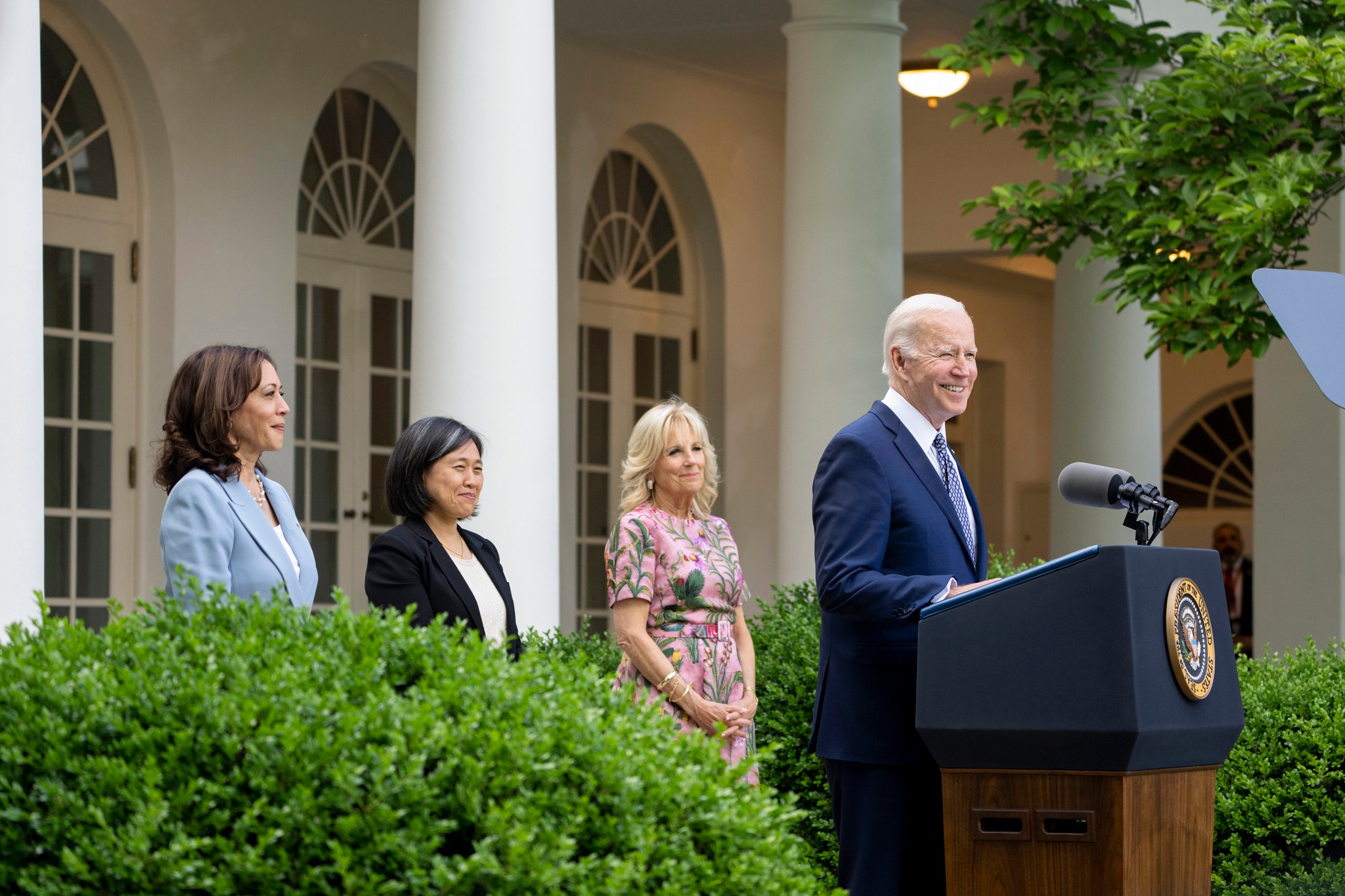 “The White House is working to put advanced anti-ship missiles in the hands of Ukrainian fighters to help defeat Russia’s naval blockade, officials said, amid concerns more powerful weapons that could sink Russian warships would intensify the conflict,” Reuters reports.

“Coloradans have elected just one Republican governor in the last 50 years. A current GOP candidate for governor has an idea that could change that: stop counting each vote equally,” KUSA reports.

Josh Marshall:  “It was only a matter of time. A candidate for Governor in Colorado has a proposal: create an in-state electoral college that will systematically over-weight rural votes and thus make it almost impossible for a Republican not to win the governorship as well as other statewide offices. Basically, counties take the place of states and Colorado has a ton of rural counties where very few people live. From what I can tell, he’s not the most likely nominee. But he won the top spot on the primary ballot at the state convention. So he’s not some random gadfly either. In any case, Gov. Jared Polis is popular and seems like a shoe-in for reelection. But this seems like the leading edge of the broader trend.

We’re no longer seeing conservatives make traditionalist arguments for anti-majoritarian aspect of the U.S. political system like the Electoral College. (It’s always been this way. Why change it?) They’re making affirmative arguments for reforms that accomplish the same things. Greg Lopez, the candidate with the proposal, is pretty transparent about the goal of the reform: Republicans can’t win otherwise. In one example of the math, about 2,000 voters in one set of three counties would have twice the number of electoral votes as a quarter of a million voters in another. The national Electoral College is bad but it’s not remotely that bad.

This plan isn’t going anywhere. But it seems highly likely that plans along these lines are coming down the pike. Anything like this has been prevented for decades by the “one man, one vote” Supreme Court decisions of more than half a century ago. But why should we believe those cases are likely to be affirmed by the current Court?”

“John Eastman, the attorney who architected Donald Trump’s last-ditch legal strategy to overturn the 2020 election, revealed Friday that he routinely communicated with Trump either directly or via ‘six conduits’ during the chaotic weeks that preceded the Jan. 6 attack on the Capitol,” Politico reports.

“In a late-night court filing urging a federal judge to maintain the confidentiality of his work for Trump, Eastman provided the clearest insight yet into the blizzard of communications between Trump, his top aides, his campaign lawyers and the army of outside attorneys who were working to help reverse the outcome in a handful of states won by Joe Biden.”

“If the U.S. Supreme Court overturns Roe v. Wade, as it’s expected to, the ensuing increase in births will likely leave families in tough circumstances and strain systems that are already hanging by a thread.”

“Even as the number of Covid infections has soared nationally thanks to Omicron variants, Republicans have insisted that any new Covid package be fully offset.”

David Brooks: “Over the last few decades, as Republicans have been using cultural issues to rally support more and more, Democrats have understood what’s going on less and less. Many progressives have developed an inability to see how good and wise people could be on the other side, a lazy tendency to assume that anybody who’s not a social progressive must be a racist or a misogynist, a tendency to think the culture wars are merely a distraction Republican politicians kick up to divert attention from the real issues, like economics — as if the moral health of society was some trivial sideshow.”

“Even worse, many progressives have been blind to their own cultural power. Liberals dominate the elite cultural institutions — the universities, much of the mainstream news media, entertainment, many of the big nonprofits — and many do not seem to understand how infuriatingly condescending it looks when they describe their opponents as rubes and bigots.”

“The Republican Party capitalizes on this. Some days it seems as if this is the only thing the party does. For example, Republican candidates could probably cruise to victory in this fall’s elections just by talking about inflation. Instead, many are doubling down on the sort of cultural issues that helped propel Glenn Youngkin to the governor’s office in Virginia.”

“The U.S. economy could be heading for a recession in the next year, according to growing warnings from banks and economists, as a sudden bout of pessimism hammers financial markets, which on Thursday spiraled further from recent highs,” the Washington Post reports.

“Consumers with low credit scores are falling behind on payments for car loans, personal loans and credit cards, a sign that the healthiest consumer lending environment on record in the U.S. is coming to an end,” the Wall Street Journal reports.

“FDA Commissioner Robert Califf refused to answer questions from lawmakers Thursday about why it took the agency months to respond to reports of infant illnesses and a whistleblower complaint regarding the infant formula plant at the heart of the current formula shortage,” Politico reports.

After refusing to overturn the results of the 2020 presidential election, Michigan Secretary of State Jocelyn Benson (D) received many threats, with President Trump himself telling aides that she should be arrested for treason and executed, she told NBC News.

A spokesman for Trump denied he made the comment.

Washington Post: “Many Democrats say privately that Biden relies heavily on a tight inner circle, most comfortable with a handful of advisers he has known for decades. The growing number coronavirus cases within the White House and the president’s orbit have indirectly revealed that few people, including top advisers and family members, appear to spend more than 15 minutes with him.”

“In a Washington where proximity to power is prized, a notable number of high-ranking people — including second gentleman Douglas Emhoff and former press secretary Jen Psaki (twice infected) — don’t seem to be within six feet of power very often.”

“Arguably, that raises questions about who is spending time with the president.”

“From 2013 through 2018, Hunter Biden and his company brought in about $11 million via his roles as an attorney and a board member with a Ukrainian firm accused of bribery and his work with a Chinese businessman now accused of fraud,” according to an NBC News analysis of a copy of Biden’s hard drive and iCloud account and documents released by Republicans on two Senate committees.

“The documents and the analysis, which don’t show what he did to earn millions from his Chinese partners, raise questions about national security, business ethics and potential legal exposure.”

The Washington Post looks at how Tucker Carlson asked Hunter Biden to help get his son into Georgetown University.

“The interactions reveal the extent to which Carlson was willing to turn on a former associate as he thrives in a hyperpartisan media world in which conservatives have made Biden a prime target for attack during his father’s presidency. They also show how Carlson once sought to benefit from the elite political circles in Washington that he now regularly rails against as the ‘ruling class.’”

A new NALEO poll of Hispanic voters in Los Angeles finds that 71% prefer to be identified as “Hispanic,” 28% prefer “Latino” and just 1% prefer “Latinx.”

“I put so much time into immigration on reconciliation. It took a year of my legislative life. I have nothing to show for it.” — Sen. Dick Durbin (D-IL), quoted by Politico.

North Korea is “preparing to conduct a nuclear test or a long-range ballistic missile test around the time of President Biden’s trip to the region this week, according to intelligence from Washington and Seoul,” the Washington Post reports.

“The chair of the Republican Party of Minnesota apologized Thursday for an image that was projected at the party’s state convention of George Soros manipulating the strings of puppets with the faces of two prominent Jewish Democrats,” Minnesota Public Radio reports.

“Taiwan, which has abandoned the zero-Covid strategy to live with the virus, hit a record number of domestic infections, rising rapidly from some 15,000 cases at the end of last month to more than 85,000 on Wednesday,” the South China Morning Post reports.

Pentagon spokesman John Kirby will move to the White House in a senior communications role, the Washington Post reports.