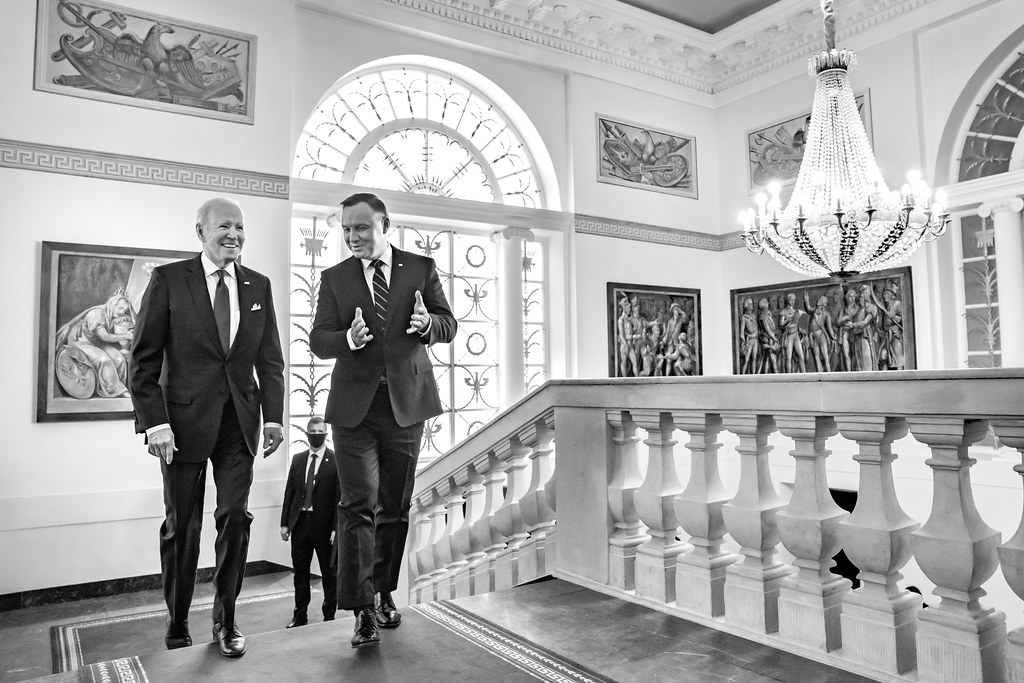 “The Russian military has fired or replaced a number of field commanders in Ukraine in recent weeks, according to the British Defense Ministry, suggesting that the poor performance of Russian forces is taking a toll on the country’s senior officer corps,” the Washington Post reports.

“The purge, described in an intelligence update Thursday, included the sacking of commanders involved in two of Russia’s most humiliating defeats since it invaded Ukraine in February.”

“The Senate confirmed Bridget Brink late Wednesday as U.S. ambassador to Ukraine, filling the post as officials plan to return American diplomats to Kyiv during the nation’s continuing battle against the Russian invasion,” the AP reports.

“The Biden administration is developing plans to further choke Russia’s oil revenues with the long-term goal of destroying the country’s central role in the global energy economy, a major escalatory step that could put the United States in political conflict with China, India, Turkey and other nations that buy Russian oil,” the New York Times reports.

“The proposed measures include imposing a price cap on Russian oil, backed by so-called secondary sanctions, which would punish foreign buyers that do not comply with U.S. restrictions by blocking them from doing business with American companies and those of partner nations.”

“President Biden is scheduled to host the prime minister of Sweden and president of Finland at the White House on Thursday, determined to send a strong signal of support for the two nations in their push to join NATO,” the Los Angeles Times reports.

Vladimir Putin is “weaponizing” global food supplies by stealing grain and destroying agricultural equipment as part of his war in Ukraine, the Telegraph reports.

“The Senate prepared to vote Thursday to deliver more than $40 billion in new military and humanitarian assistance to Ukraine, a move which would send the measure to President Biden after a week-long delay sparked by a lone senator’s objection,” the Washington Post reports.

“House GOP leaders were among the 192 Republicans who voted against providing $28 million in aid to the Food and Drug Administration to address the shortage of baby formula — within days of criticizing President Biden for not doing enough on the issue,” the Washington Post reports.

“The House select committee investigating the Jan. 6, 2021 attack on the U.S. Capitol by a pro-Trump mob issued a request on Thursday for an interview with Rep. Barry Loudermilk (R-GA), citing evidence the panel has obtained regarding a tour he led through parts of the Capitol complex the day before the attack,” the Washington Post reports.

“The Oklahoma Legislature gave final approval on Thursday to a bill that prohibits nearly all abortions starting at fertilization, which would make it the nation’s strictest abortion law,” the New York Times reports.

“The bill is modeled on one that took effect in Texas in September, which has relied on civilian instead of criminal enforcement to work around court challenges. But it goes further than the Texas law, which bans abortions after about six weeks of pregnancy.”

Washington Post: “Under the Oklahoma bill, those who could be punished include anyone who ‘performs or induces’ an abortion; anyone who ‘knowingly engages in conduct that aids or abets the performance or inducement of an abortion,’ including paying for one; and anyone who even ‘intends to engage’ in either of the two actions above.”

During a House Judiciary Committee hearing on abortion access on Wednesday, Rep. Mike Johnson (R-LA) grilled Dr. Yashica Robinson on just how far into a patient’s pregnancy she would go to perform an abortion.

Rep. Chip Roy (R-TX), there to ensure that the House hearing on abortion didn’t get any less stupid, gave Robinson the third degree over “baby parts” that he claimed were being stored in freezers and Pyrex dishes.

“Massachusetts health authorities confirmed a case of monkeypox Wednesday after the Centers for Disease Control and Prevention said it was monitoring the possible spread of the rare but potentially serious viral illness,” the Washington Post reports.

Science Alert: “Spain and Portugal have detected over 40 suspected cases of monkeypox, a viral infection rarely seen in Europe, with both outbreaks concentrated in the Madrid and Lisbon areas.”

“But he wants to make sure — so that we can all move on to more serious business.”

“One of the most eye-popping moments during a House Intelligence Committee hearing on UFOs on Tuesday was when the Wisconsin Republican pressed Pentagon officials on claims that a ‘glowing red orb’ once shut down nuclear weapons in Montana and that a recently leaked document revealed that other-worldly vehicles — and possibly even extraterrestrial bodies — are being kept from government leaders and the public.”

“The results make clear that the November midterms may well affect the fate of free and fair elections in the country.”

John Ellis: “On paper, it doesn’t make any sense. Recapturing control of the U.S. Senate is far more important than which candidate keeps the seat on the Republican side of the aisle. That certainly would be Sen. Mitch McConnell’s point of view.”

“But who knows with Trump? ‘Stop The Steal’ has been the political fund-raising pitch of all time. Trump has raised well over $100 million proclaiming it (and other grievances) in countless direct mail and email solicitations. Why not refresh it, give it a new spin?”

“If that angers Mitch McConnell, so much the better. From Trump’s point of view, anything that creates turmoil in the ranks of the Republican Senate Caucus and gets a few more Senators thinking that maybe Sen. Rick Scott, just to pick a name out of the air, might be a better GOP Senate Leader, well…why not?”

“Vindman, an Army attorney who served as the ethics counsel on the National Security Council, was given unfavorable reviews, stripped of his responsibilities, and ultimately fired, the Pentagon Inspector General report concluded, after he told National Security Council officials that Trump may have broken the law in a July 25, 2019, phone call with Ukraine’s recently sworn-in leader, Volodymyr Zelensky. In the now infamous call, Trump asked Zelensky to open an investigation into Joe Biden ahead of the 2020 election.”

Punchbowl News: “Their own polls have them in the dumps. Party leaders have struggled to wrangle the votes for a simple messaging bill. Meanwhile, the caucus continues to be dominated by fallout over the revised New York House maps, led by an internal backlash against the DCCC chair.”

“We’ll get to the latest drama in a minute but first a little news: We checked in with senior House Democrats late last night who told us after several days, they finally have the votes to pass a bill today to punish oil companies for price gouging.”

“Remember, this is a messaging bill designed to help the most vulnerable House Democrats in their campaigns. It’s not going anywhere in the Senate. Yet it took all week just to get the Democratic Caucus on board. That’s how it’s going for House Democrats right now.”

Playbook: “With Memorial Day recess around the corner and much of President Joe Biden’s agenda still stuck on Capitol Hill, a sense of helplessness has settled in among some Democrats: The closer they inch toward Election Day, they realize, the more unlikely they are to notch any additional legislative victories. And yet, voters are angry and demanding action now.”

“The three Democrats, who have been leading the effort in the Senate, support $50,000 in student debt relief, which is five times what Biden has indicated he would support.”

“President Joe Biden’s decision on whether to forgive student debt will be personal for many of his aides, who are among the millions of Americans carrying loans for college and graduate school,” Bloomberg reports.

“The decision of one man to launch a wholly unjustified and brutal invasion of Iraq. I mean of Ukraine.” — Former President George W. Bush, in a speech.

“Federal health officials warned on Wednesday that a third of Americans live in areas where the threat of Covid-19 is now so high that they should consider wearing a mask in indoor public settings,” the New York Times reports.

“They cited new data showing a substantial jump in both the spread of the coronavirus and hospitalizations over the past week.”

A new Axios/Ipsos poll finds that 31% of Americans believe the coronavirus pandemic is over while 69% disagreed.   However, perception of the pandemic varied widely across party lines, with 59% of Republicans, 27% of independents and 10% of Democrats agreeing the pandemic is over.

As he’s blatantly trying to worm his way out of going through with his deal to buy Twitter, Tesla CEO Elon Musk announced on Wednesday that he would no longer be voting Democrat, but Republican instead because Democrats have “become the party of division and hate.”

If you’re wondering why I’m flagging Musk’s self-important declaration, here it is: His tweet ended with “Now, watch their dirty tricks campaign against me unfold.” Translation: He’s at risk of landing in some deep shit with the government (oh hi, SEC) and he’s setting up a pretext for his fan club to think he’s a victim of Biden’s partisan wrath.

Also, Musk donated nearly $39,000 to a Republican fundraising committee back in 2018, so like, maybe he’s not being completely honest about how super loyal he was to the Democratic Party before he was drawn away by the unity and kindness that today’s Trump-era GOP is famous for.

“For the 2020 census, all states were not counted equally well for population numbers used to allocate political representation and federal funding over the next decade, according to a U.S. Census Bureau report released Thursday,” NPR reports.

Jonathan Chait: “The Democratic Party has a lot of problems right now. Many of these problems lie outside its control: A global wave of inflation and continuing waves of coronavirus infection have prevented the recovery Joe Biden imagined when he took office last year, and the party’s slender majority gives it very narrow room to maneuver legislation through Congress.”

“That said, Democrats still have some room to improve their situation. They retain their congressional majority until January, and Joe Manchin has expressed his willingness to negotiate a bill to raise taxes on the rich and fund at least some new programs, including support for green energy. And yet their main response to a looming political and policy catastrophe appears to be fatalistic acceptance.”

“Nearly 64 percent of adults between the ages of 55 and 64 were working in April, essentially the same rate as in February 2020. That’s a more complete recovery than among most younger age groups,” the New York Times reports.

“The rapid rebound has surprised many economists, who thought that fear of the virus — which is far deadlier for older people — would contribute to a wave of early retirements, especially because many people’s savings had been fattened by years of market gains.”