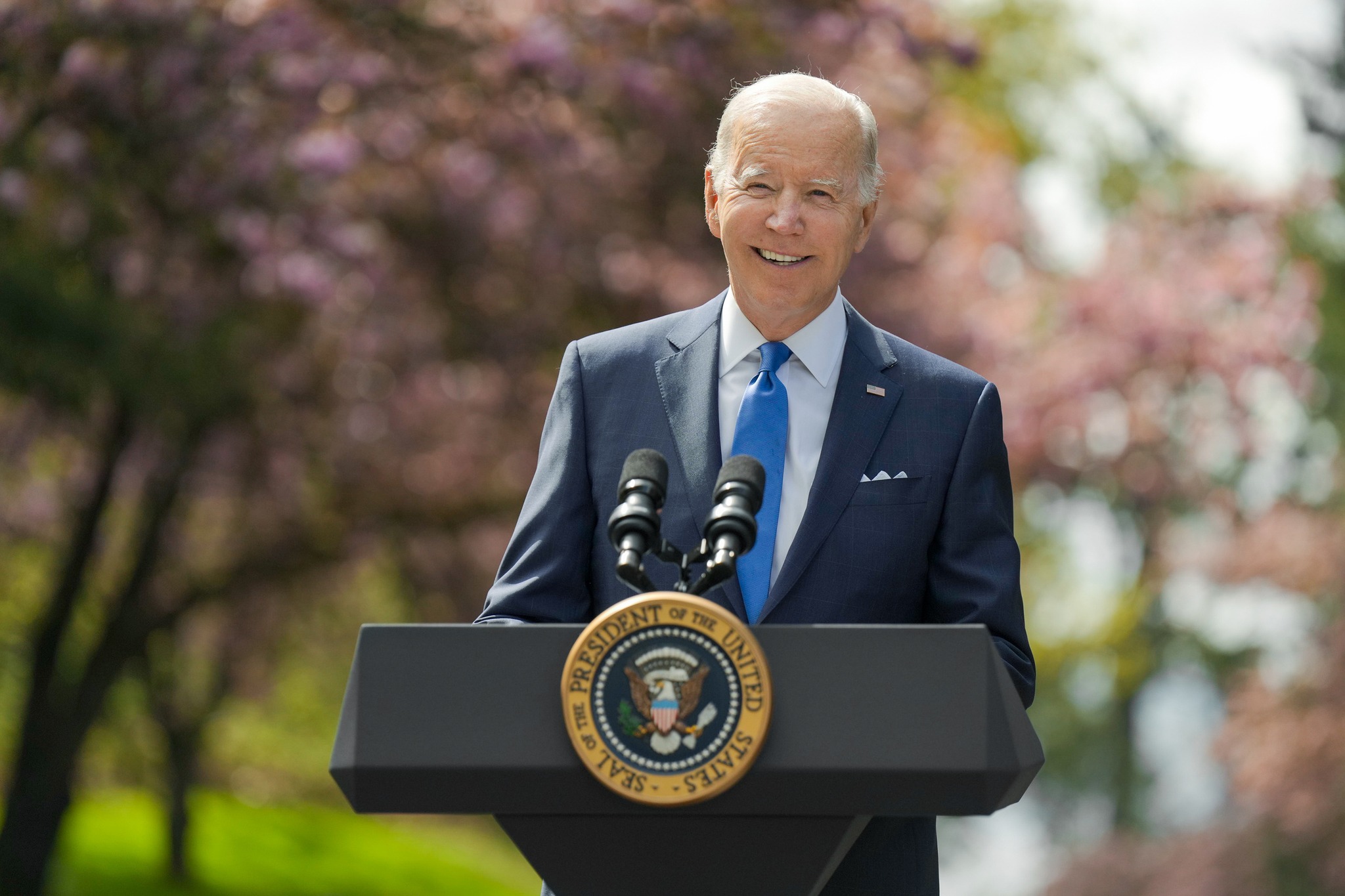 From Tucker Carlson to Elise Stefanik, from Steve King to assorted other GOP characters, the white nationalist “Great Replacement Theory” has been putrifying in the right-wing fever swamp for several years now. The carnage over the weekend in Buffalo, New York, where an 18-year-old white gunman under the influence of the “Great Replacement Theory” allegedly targeted a Black neighborhood grocery store, prompted a fresh round of denunciations and explainers.

A Stefanik spokesperson denied that the GOP congresswoman had ever advanced the racist conspiracy theory, telling the Times Union that she has “never been in favor of ‘replacement theory.’”

NPR: “What is the ‘Great Replacement’ and how is it tied to the Buffalo shooting suspect?”

The President and the First Lady will visit Buffalo on Tuesday after a 18-year-old white man allegedly fatally shot 10 people at a supermarket in a predominantly Black neighborhood on Saturday in what is being investigated as a hate crime.

11 of the 13 people who were shot in total during the attack were Black, according to law enforcement. The massacre is being investigated as a hate crime federally and locally, according to Attorney General Merrick Garland and Erie County District Attorney John Flynn. The suspected shooter allegedly visited the area at least the day before the massacre, apparently to do some “reconnaissance work,” the Buffalo police commissioner said on Sunday.

The suspected shooter was investigated last year over a threat he made at his high school and was taken into custody for a mental health evaluation before being released, according to New York state authorities.

Tucker Carlson on his Fox News show in 2018:

“How, precisely, is diversity our strength? Since you’ve made this our new national motto, please be specific as you explain it. Can you think, for example, of other institutions such as, I don’t know, marriage or military units in which the less people have in common, the more cohesive they are?

Do you get along better with your neighbors, your co-workers if you can’t understand each other or share no common values? Please be honest as you answer this question.”

The Buffalo gunman in a 180-page manifesto explaining his motivations behind last weekend’s mass shooting:

Said Cheney: “The House GOP leadership has enabled white nationalism, white supremacy, and anti-semitism. History has taught us that what begins with words ends in far worse. GOP leaders must renounce and reject these views and those who hold them.”

Arizona state Sen. Wendy Rogers (R), who has ties to white nationalists, suggested the racially motivated mass shooting at a Buffalo supermarket was staged by government agents, the HuffPost reports.

“Sweden will jettison 200 years of military non-alignment and apply to join Nato alongside its neighbor Finland, a move that would change the geopolitics of Europe and underscore the unintended consequences of Vladimir Putin’s invasion of Ukraine,” the Financial Times reports.

Russia on Monday warned Finland and Sweden that plans to join the North Atlantic Treaty Organization were a “grave mistake,” as Moscow’s forces stepped up attacks in eastern and southern Ukraine, the Los Angeles Times reports.

Said Sergei Ryabkov, Russia’s deputy foreign minister: “The fact that the security of Sweden and Finland will not be strengthened as a result of this decision is very clear to us. They should have no illusions that we will simply put up with it.”

“The United States is seeking clarification after Turkey’s president suggested Friday that he was reluctant about Sweden and Finland potentially joining the NATO defense alliance,” the Washington Post reports.

“The Turkish warning came a day after a landmark recommendation from Finland’s leaders that the country join NATO and as Swedish leaders appeared ready to follow their lead this weekend.”

“After more than three decades in Russia, McDonald’s — an icon of U.S. lifestyle and capitalism — is selling its Russia business as it looks to leave the country completely,” the New York Times reports.

“The move is a significant departure for a brand whose growth across the world became the symbol of globalism and even the basis of a peace theory.”

“The Supreme Court on Monday ruled in favor of Republican Sen. Ted Cruz of Texas in a case involving the use of campaign funds to repay personal campaign loans, dealing the latest blow to campaign finance regulations,” CNN reports.

“The court said that a federal cap on candidates using political contributions after the election to recoup personal loans made to their campaign was unconstitutional.”

Former Federal Reserve Board chairman Ben Bernanke to the New York Times: “Even under the benign scenario, we should have a slowing economy. And inflation’s still too high but coming down. So there should be a period in the next year or two where growth is low, unemployment is at least up a little bit and inflation is still high. So you could call that stagflation.”

The Biden administration was caught flat-footed last week on the baby formula shortage across the country. President Biden made matters worse when he suggested to reporters that he needed special powers to handle the crisis: “If we’d been better mind readers, I guess we could have. But we moved as quickly as the problem became apparent to us, and we have to move with caution as well as speed.”

The problem with that explanation was that Biden only needed to read the newspaper to know what was going on. The Wall Street Journal had an in-depth article on the coming shortage more than five months ago. Fortunately, Transportation Secretary Pete Buttigieg came to the rescue over the weekend in a Face the Nation interview where he clearly and concisely explained the cause of the shortage:

“This is a capitalist country. The government does not make baby formula, nor should it. Companies make formula. And one of those companies, a company which, by the way, seems to have 40% market share, messed up and is unable to confirm that a plant, a major plant, is safe and free of contamination. So the most important thing to do right now, of course, is to get that plant in Michigan up and running safely.”

Buttigieg’s crisp and direct answer correctly assigned the blame to the company at fault, Abbott Laboratories, and noted there is a big difference “between a supply-chain problem… and a supply problem.”

Of course, as a messenger it’s also helpful that Buttigieg has two newborns at home. But it’s not at all clear why the Transportation Secretary is delivering this message instead of Health and Human Services Secretary Xavier Becerra or FDA Commissioner Robert Califf.

“Sen. Cynthia Lummis (R-WY) was resoundingly booed on Saturday while giving a commencement address at the University of Wyoming after she said it is a ‘fundamental scientific truth’ that there can only be males and females,” the HuffPost reports.

Said Lummis: “There are those in government who believe not that the creator endowed us with inalienable rights … but that government created those rights. And the government should redefine those rights, including our rights to freedom of speech, religion, property, assembly and to keep and bear arms. Even fundamental scientific truths — such as the existence of two sexes, male and female — are subject to challenge these days.”

“Students erupted in boos and jeers after that last sentence — and they continued on for nearly 30 seconds as Lummis stood awkwardly smiling onstage.”

“President Biden has signed an order authorizing the military to once again deploy hundreds of Special Operations forces inside Somalia — largely reversing the decision by President Donald Trump to withdraw nearly all 700 ground troops who had been stationed there,” the New York Times reports.

“In addition, Mr. Biden has approved a Pentagon request for standing authority to target about a dozen suspected leaders of Al Shabab, the Somali terrorist group that is affiliated with Al Qaeda.”

“Health insurance premiums for millions of Americans will spike if Congress doesn’t act in the next few months, with particularly big increases in politically contested states, according to a report that the liberal advocacy group Families USA released on Monday morning,” the HuffPost reports.

Washington Post: “One federal appeals court judge in D.C. has hired only male law clerks for the past two decades. Another judge allegedly refused to speak to a staffer for weeks after a child-care emergency caused the assistant to depart work early one day. Others are said to have reduced their employees to tears by yelling or making cruel comments about the quality of their work.”

“These and other complaints appear in a confidential workplace survey conducted for the federal trial and appeals courts in the nation’s capital, an institution regarded as a steppingstone to the Supreme Court. It details instances of gender discrimination, bullying and racial insensitivity, while underscoring the stark power imbalance between judges with life tenure and the assistants who depend on them for career advancement.”

“President Trump plans to partially restrict himself from using Twitter, according to a new federal securities filing from the blank check company taking his social network, Truth Social, public,” Axios reports.From the filing: “President Trump is generally obligated to make any social media post on TruthSocial and may not make the same post on another social media site for 6 hours. Thereafter, he is free to post on any site to which he has access. Thus, TMTG has limited time to benefit from his posts and followers may not find it compelling to use TruthSocial to read his posts that quickly.”

“In addition, he may make a post from a personal account related to political messaging, political fundraising or get-out-the-vote efforts on any social media site at any time.”

“You can read it — here it is — and of course I will discuss it, because it is funny and because that is what I do for a living. But in a sense there is no point in reading it. It will not tell you much about TMTG’s business, because TMTG doesn’t have much of a business.”

“President Biden is telling White House aides to shift into campaign mode, reminding them even small mistakes can be costly and demanding they take opportunities to highlight differences with Republicans,” Axios reports.

“His private exhortations over the past month are another indication he wants to make November’s congressional and gubernatorial contests into choices between two competing acknowledgmentvisions, rather than a referendum on his two years in office.”

“The fever didn’t break. And for the Biden White House, efforts at bipartisanship have finally taken a backseat,” Politico reports.

“To the frustration of many Democrats and some of his closest advisers, President Joe Biden has steadfastly spent more than a year in office insisting on trying to work across the aisle with Republicans.”

“It’s produced some notable legislative successes. But it’s also been colored by a fair dose of in-your-face GOP obstructionism. Now, more than a year later, Biden no longer believes that most Republicans will eventually drop their fealty to Donald Trump and show a willingness to engage. He himself admitted he was wrong.”

Sen. Chris Van Hollen (D-MD) announced late Sunday night that he was recovering from “a minor stroke,” the second Democratic lawmaker to fall ill from the ailment this year.

CNN reports the lawmaker was admitted to George Washington University Hospital over the weekend after he had been “experiencing lightheadedness and acute neck pain” while delivering a speech in his home state.